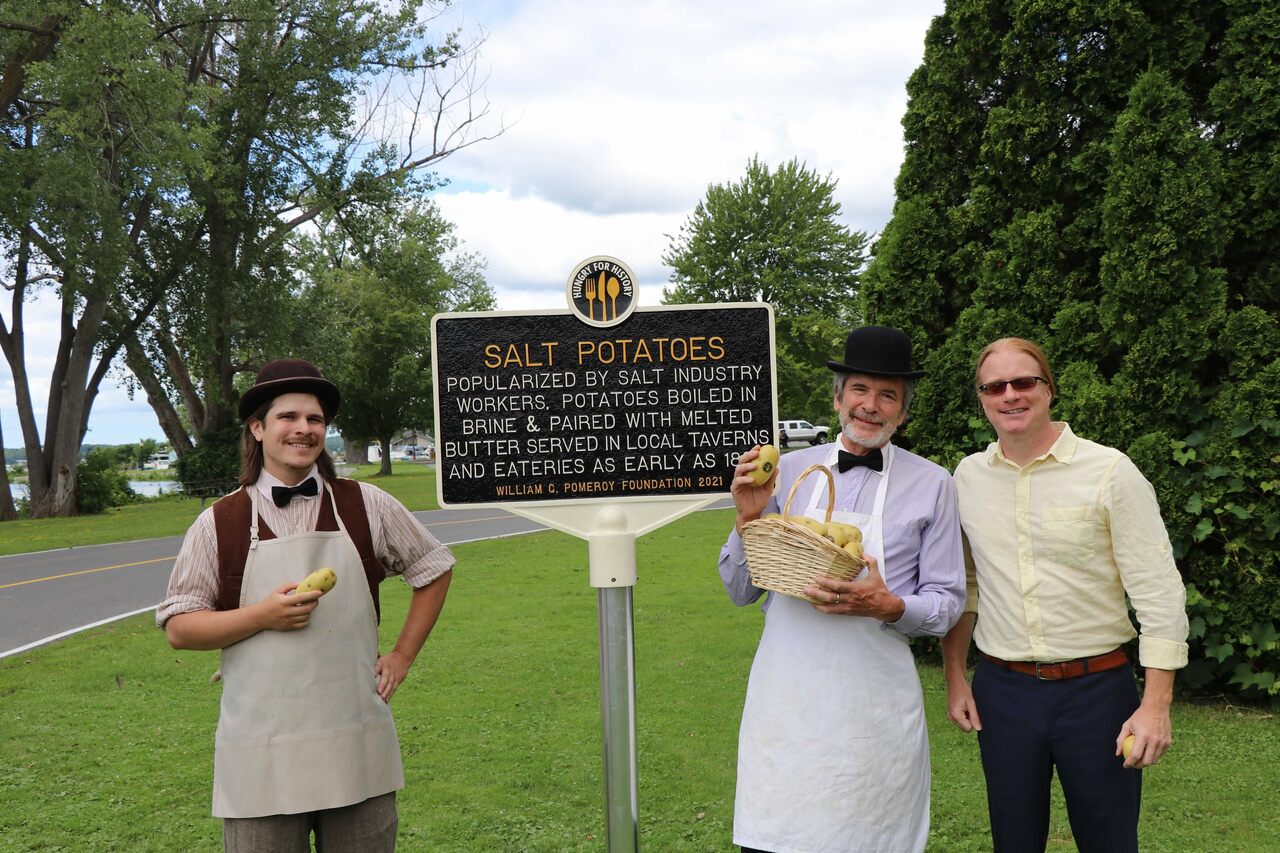 A small ceremony was held this past weekend on the shores of Onondaga Lake Park in Syracuse, New York. After some socializing, there were speeches from a state senator and area curator as well as appearances by two local actors in period clothing impersonating 19th-century barkeeps. The event culminated with the unveiling of a new marker that recognizes a storied potato dish with outsized influence.

“It’s amazing how much can be tied to one little spud,” says Robert Searing of the Onondaga Historical Association, “but it’s all there.”

The marker honors a regional icon called “salt potatoes”—new potatoes boiled in heavily salted water, which leaves the little tubers encased in a salty crust that sheaths a creamy, flavorful interior. (It’s topped with butter, too, but more on that later.) The dish is one of a kind, but the marker is set to be the first of many. In fact, the next one could be in your hometown.

Syracuse’s salt-potato marker is the first in a brand new series of roadside-markers funded by the William G. Pomeroy Foundation—a philanthropic organization that preserves community history through a host of marker grant programs. “Hungry for History” is now accepting grant applications from all over the United States to commemorate foods—like salt potatoes—that have forged regional identity and are significant to local history. In the case of salt potatoes, says Searing, “it’s about the history of an industry that literally built a city that is [primarily] known for basketball or air conditioning. But really, it’s salt.”

For much of the 1800s, Syracuse provided so much of the nation’s salt that it was known as “Salt City.” In fact, at its peak in the 1870s, the Onondaga Salt Reservation alone—a rich vein of salt at the southern end of Onondaga Lake—provided about 90 percent of the country’s salt. Geological circumstance gave rise to the once-booming industry; in turn, the industry gave rise to the enduring salt potato.

As lead curator, Searing led the charge in applying for the grant on behalf of the Onondaga Historical Association (OHA). Local lore held that the many thousands of Irish immigrants who often worked the “salt blocks” (where brine was pumped from wells and either boiled or evaporated to make salt) simply tossed potatoes into the boiling brine for a quick snack on the job or to take home for their families. But hearsay won’t cut it for this grant. “They want to make sure that anything that you see on one of their markers is substantiated history,” says Searing, “that it’s not just folklore passed down through the generations.”

After pouring over digitized 19th-century news clippings within the OHA research center, Searing—an upstate native with a background in early American history—emerged with receipts. He pinned down an 1888 article from the Syracuse Courier about the first tavern in town to sell “hot salt potatoes.” The bar was owned and operated by the Keefe Brothers, the very barkeeps impersonated at the marker’s unveiling this weekend. Searing then located the Keefes’ father in the 1850 census, who was indeed an Irish emigre and longtime worker in the Syracuse salt blocks.

“So the brothers grew up eating them and they’re like, ‘You know what, these are really good, I bet we can sell a lot of them. Everybody will love them either because they’ve grown up eating them too or because they’re freakin’ little salty balls of buttery deliciousness,’ and from there you get this,” says Searing. “Here we are in 2021, and I think you’re the 15th reporter I’ve talked to.”

As a historian, it was a rousing breakthrough. “I was thrilled to uncover the story and be able to substantiate what we’ve always thought but never had documentation for,” says Searing. “You don’t often get that opportunity as a historian.” But even as a local, he’s been surprised at the amount of praise the project is receiving. “The outpouring of community love and support has been, I mean, truly astonishing,” says Searing.

While the dish is little known outside of upstate New York, salt potatoes are a beloved mark of the summer season. “You’re not going to a barbecue, graduation party, or birthday party up here that doesn’t have salt potatoes,” says Searing. For those who don’t live in the region, they’re easy enough to make on your own.

The trick is using what Searing calls “an unconscionable amount of salt.” While he boils his potatoes in one part salt to four parts water, Deryn Pomeroy, who is Director of Strategic Initiatives at the Pomeroy Foundation and also grew up eating salt potatoes, leans closer to one-to-three. “I didn’t realize they weren’t widespread until I went to college,” she says. The only other key is to use unpeeled, new potatoes—not much bigger than a golf ball and as consistent in size as possible.

To make them at home, first completely cover the potatoes in heavily salted water. Bring the water to a boil over high heat, then reduce to a simmer for about 25 minutes (as the potatoes cool and dry, you’ll notice the signature salty crust envelope each one). To finish, drizzle butter over the potatoes or use softened butter as a side dip. “Use really good butter,” says Searing. “Kerrygold is money.” The result, says Searing, should taste like it’s “mashed in the skin.” He claims to have never fed anyone a salt potato they didn’t enjoy.

As for getting your town or city its own “Hungry for History” marker, the deadline for submitting a letter of intent is August 9th. Individuals cannot apply themselves, but if you know of a strong contender, Pomeroy encourages working with either your state or local governments, or any local nonprofit organization or historical association to begin the process. She’s already fielding applications from around the country. “There are a number of them that do look promising and that we’re pretty excited about,” she says.

Per the Pomeroy Foundation website, qualifying applications for Hungry for History markers must meet the following criteria:

If there’s a storied local dish in your hometown you think deserves a marker, check out the application process—yours could be next.

The British East India Company handed out seeds and bribes to farmers willing to grow the humble spud.
science

Before Antoine-Augustin Parmentier, the French considered the tuber disgusting and poisonous.
restaurants

The demae cycled one-handed while balancing dozens of boxes of soba noodles.
Video • Wonder From Home

A Frankenstein blend of science and art allows one tree to produce 40 different types of stone fruit.
Brunswick, Georgia

This location of a Mexican chain restaurant has a unique location: an old jail.
Monon, Indiana

Train cars and railroad artifacts abound at this restaurant devoted to railway history.
Want to see fewer ads? Become a Member.
From Around the Web
THE GASTRO OBSCURA BOOK
Taste the World!
An eye-opening journey through the history, culture, and places of the culinary world. Order Now