What Do California Otters and Virginia Opossums Have In Common? - Atlas Obscura
Want to see fewer ads? Become a Member. 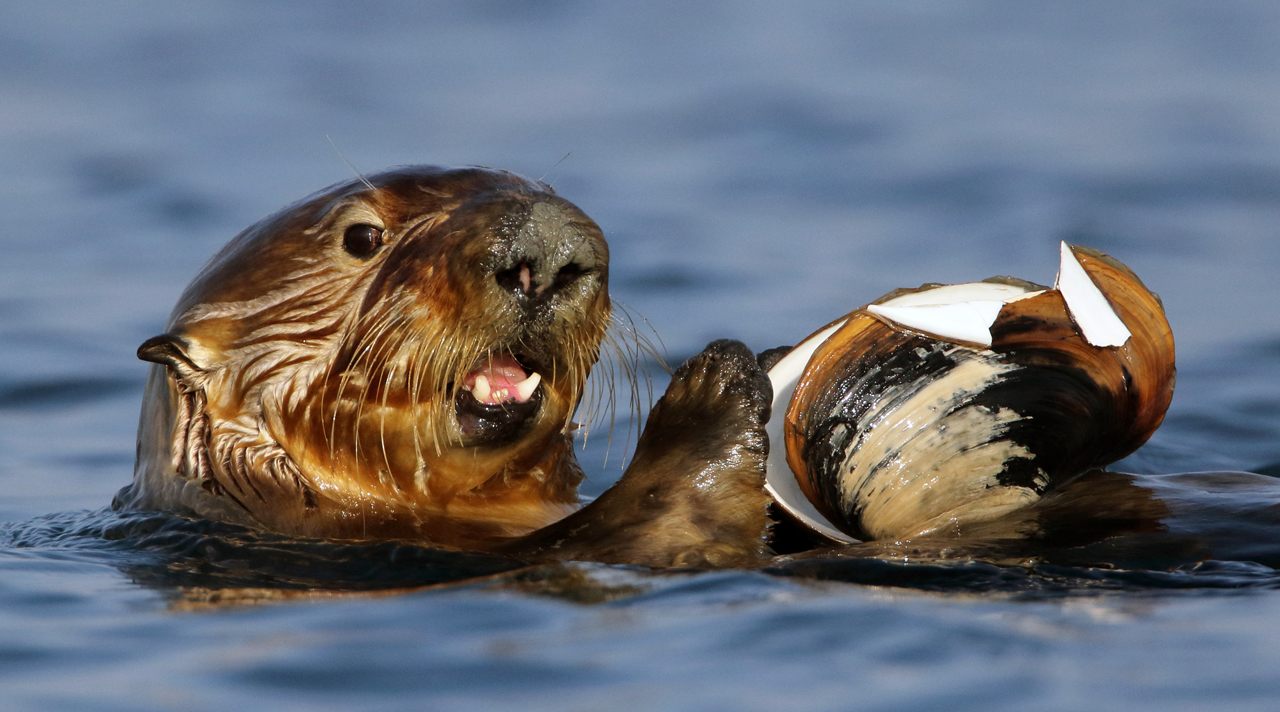 As the new coronavirus continues to wreak havoc, hopping from human to human, scientists have figured out how another perilous pathogen has been sliding from land to sea.

Scientists have long known that disease-causing parasites play host hopscotch to survive. Now, researchers at the University of California, Davis, and colleagues have mapped the game as it’s played by Sarcocystis neurona, a pathogen that causes brain swelling in sea otters, which often kills them. Off the West Coast, it turns out the parasite slips from opossums to otters by way of clams—a complex transmission chain that’s exacerbated by human activity, according to a paper published recently in Scientific Reports.

The years-long study entailed capturing more than 700 sea otters to test them for disease exposure. Which is easier said than done. “You can’t just go out and bag them up,” says Tristan Burgess, wildlife veterinarian and epidemiologist at Acadia Wildlife Services in Maine, also of the One Health Institute at UC-Davis, and one of the paper’s co-authors. “They are pretty wily; they see you coming.”

Snagging an otter for science requires a boat, spotters on land and at sea, veterinarians at the ready, and divers who have to swim up from below with a specially designed trap, then hold on to what is essentially thrashing shark bait (wiggly otters are a big temptation) in a place where there are a lot of sharks. “The divers like us to get them back in the boat ASAP,” Burgess says.

The work created the biggest and longest-term live-capture data set ever collected for sea otters. With it, the team found clusters of the infection off the coasts of Southern California and Washington state, and parts of Canada, but much less of it off Alaska.

They believe the parasite takes a circuitous route that starts on land, in Virginia opossums—also called North American opossums, with a range that includes Central America—then moves via freshwater runoff, such as that from storms, to filter-feeding clams, where the pathogen becomes concentrated. Otters then eat those clams and get sick. The runoff-to-clam link lets the parasite infect otters outside of the opossum’s immediate area, the scientists say, although Alaska appears to be mostly out of reach.

In addition to the marine mammals’ clam-rich diet, the study found that certain landscapes help the parasite succeed. Wetlands, for example, are a favorite habitat of the parasite’s hosts, the opossums. Agricultural lands and dense human housing also seem to draw opossums, while irrigation, artificial drainage, and pavement help increase the runoff that parasites ride into the sea. And the soft sediment at the mouths of rivers and estuaries is another parasite booster, because of all the clams there.

“In a way, sea otters are urban wildlife,” says Burgess. “They live close to shore, and don’t have an aversion to living near people. And they use habitat that’s near rivers, which connects them physically to the land. What happens on land, then, can put them at risk of exposure.”

Decades of studies by scientists led by the UC Davis School of Veterinary Medicine and the California Department of Fish and Wildlife previously found a similar story with Toxoplasma gondii, another pathogen that kills marine mammals. It has its own land-to-sea transmission path: When the feces of wild and feral cats gets into the water, the parasite accumulates in kelp forests. Its eggs are picked up by turban snails as they munch kelp fronds. The otters then eat the pathogen-filled snails.

“[Sarcocystis neurona and Toxoplasma gondii] are closely related parasites, both thought of as terrestrial until we found them in marine mammals,” says veterinarian and epidemiologist Elizabeth VanWormer of the University of Nebraska–Lincoln, who was not involved in the new study. “Although they both move from land to sea, we now know that steps in their transmission chains are likely different—which reminds us there are many similar themes out there, but with different mechanisms. It makes things tricky.”

Nowadays, she says, it takes scientists from a host of disciplines—from epidemiology to hydrology to wildlife behavior—to tease out the various factors driving any single disease.

The study also highlights that what humans do on shore has effects that reach marine ecosystems. For example, as with the domestic cats transmitting T. gondii, “the Virginia opossum isn’t native to the West—so sea otters would have had no contact with them historically,” says Burgess. The animal was introduced to western states during the Great Depression, perhaps as a food source, and it soon established itself along much of the Pacific coast, including southern British Columbia. Now it plays host to S. neurona.

Meanwhile, “our actions, how we shape our coastal watersheds, influence parasite runoff,” says VanWormer. “When we change the way water flows by paving or otherwise developing the coast, we give parasites new ways to flow off the landscape and reach [targets] they didn’t have before.”

What it comes down to is “pathogen pollution,” says Burgess. “We are doing things that increase the opportunity for pathogens to find new hosts and enter new spaces.” Sometimes the results are mild, but other times “we see millions of deaths, or even multiple species going extinct, as with chytrid fungus in amphibians and white-nose syndrome in bats.”

S. neurona is not known to transmit to humans, though T. gondii can; it may sicken immunocompromised people, and can have severe effects on unborn fetuses. (It’s the reason doctors advise pregnant women not to clean their cat’s litter box.)

In fact, about two-thirds of known infectious organisms are zoonotic, meaning they can make the leap from animal to human hosts—just like the coronavirus responsible for the current pandemic, which most likely originated in bats. These zoonotics are the parasites most often associated with emerging diseases.

Until we better understand the way pathogens of all sorts move around—whether from land to sea or from bat to human (with other hosts in between)—says Burgess, “we risk allowing something we haven’t seen before to spill over.”

And that, as we know all too well in 2020, can have tragic consequences.

3 Transportive Documentaries That Can Take You Away

When ice goes, lichens and mosses move in and an entirely new ecosystem starts to take shape.
caves

For one biologist studying the rock frogs' behavior, safeguarding their habitat is personal.
Video