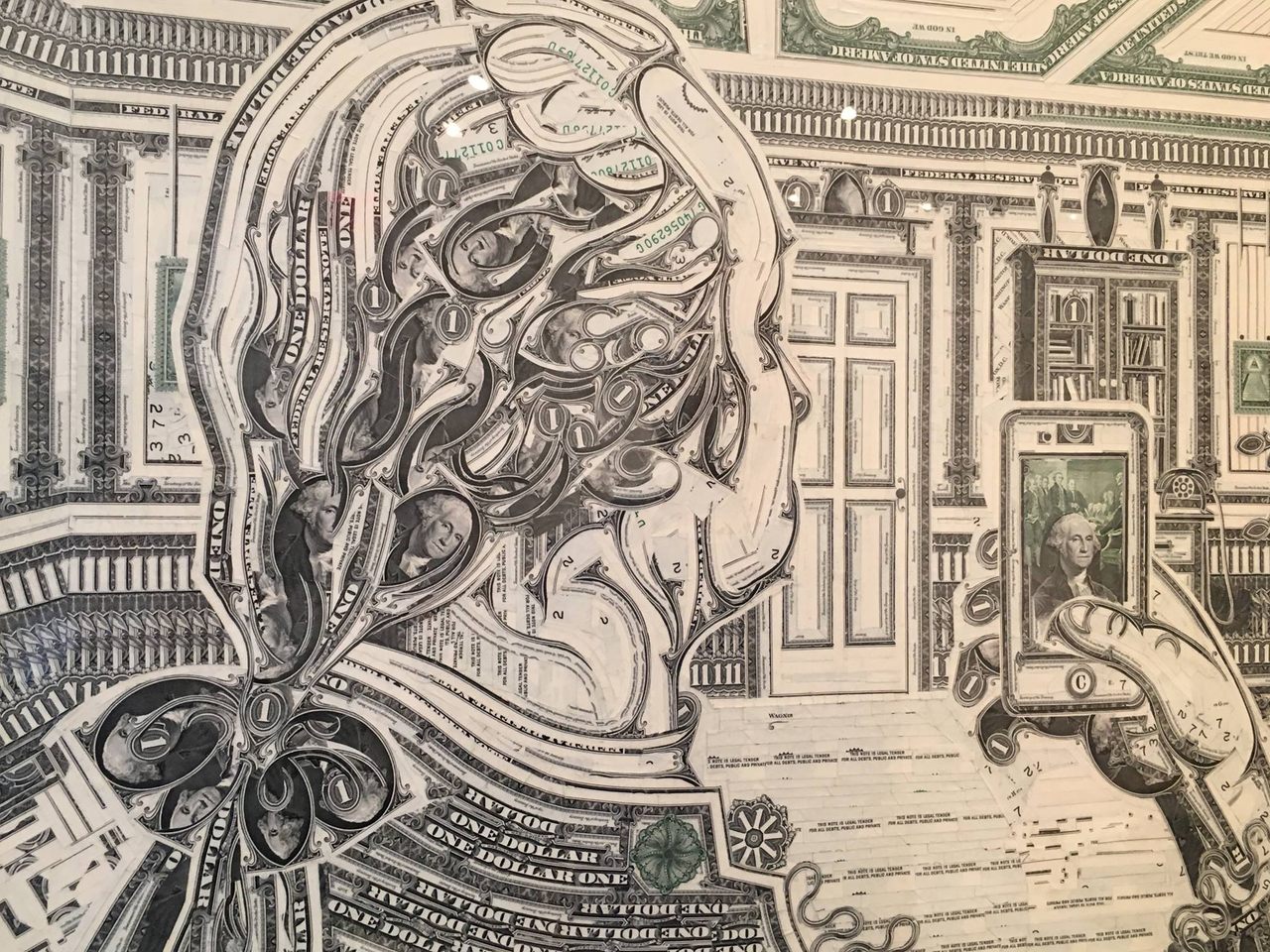 Wish You Were Here. Mark Wagner

When the collage artist Mark Wagner first started creating his signature pieces, he faced every day with a significant decision: save that fresh stack of one-dollar bills sitting on his drafting table for his currency-based artwork, or eat heartily.

But to Wagner, those thousands of bills were meant for more than just creature comforts. Soon he would slice them up into 25 of their individual components—George Washington heads, treasury seals, the various letters—and glue them onto sketches that skewered capitalism, or socialism, or both, making sure every last sliver was accounted for.

His frugality paid off: last month, Wagner opened I’m Mark Wagner and I Approve of This Message at the Pavel Zoubok Gallery in New York City, just in time for the final stretch of the presidential campaign. In a conversation with Atlas Obscura, Wagner discusses the unique methods he uses to construct his currency portraits, from decapitating George Washington with a “Guillotine cutter” to the signature he takes special pains to avoid.

How do you go about cutting the currency?
There’s probably about a dozen different ways we approach a dollar for use… Sometimes we just shred the bills. Much of the time a bill gets sort of dissected into its constituent parts, separating lights and darks, preserving line work that might be used for “drawing” purposes, subdividing Washington’s face into cheeks, foreheads, necks… all of which have their specific uses.

Most recently I’ve been cutting up a hundred bills at a time in a 19th-century Guillotine cutter that lets me slice like butter through an entire stack at once.

Detail of Wish You Were Here. (Photo: Mark Wagner)

Tell me more about your selfie still-lives.
The design of the dollar bill hasn’t changed since, like, the 1950s, and even then it didn’t change that much. And there’s really not much to root my artwork in any specific time since then. So I wanted to do something super-contemporary.

At the same time, the computer-ish things our phones are doing is also changing the nature of money. And vanity and money don’t have anything to do with each other… right?

Do you use every piece of the dollar bill in your work?
There are pieces that fall out of favor. I’ve been avoiding [former U.S. Treasury Secretary] Timothy Geithner’s signature for years because it’s ugly. I’ve got a bag that must have like, 2,000 of his signatures, but it’s still only a tiny bag.

There’s a lot of symbolism in these pieces. Does that cohere after construction, or is it planned before?
It’s a mixed bag as far as the symbolism goes. Some of the pieces are obviously very heavy-handed with their commentary. But some of the work is just pretty. I don’t fret too much over it.

I’d drive myself crazy if I tried to plan everything in advance… and I’d fail at it, to boot. I have strategy in mind for every piece before I start, but am happy to adjust tactics while they are getting made.

How did you first decide to use currency as collage material?
I wanted to use a very familiar piece of paper… something contemporary, recognizable and familiar to as many people as possible. I grabbed a dollar. At the time I had no idea where that would lead.

You’re starting to work with foreign currencies. What’s behind this shift?
Working so strictly with the U.S. dollar for so many years, I’ve missed color. Foreign currency gives a broad choice of color, design, imagery to use, but there are a bunch of new, non-obvious obstacles for me at the same time. I’m used to having access to a thousand of every little piece I might need, but I don’t have a thousand whatever-that-currency-is from wherever-that-place-is.

More importantly, as an American, I feel a measure of confidence commenting on America and its foibles. Less so with… any other spot on the globe. So far the foreign currency pieces have all mixed passages of U.S. currency against passages of generalized foreign currency. This “us vs. them” [motif] is, unfortunately, very American.

The Bizarre Drama Over the Internet's Domain Naming System