Why a South African Petrochemical Plant Is Like Catnip to Servals - Atlas Obscura
Want to see fewer ads? Become a Member. 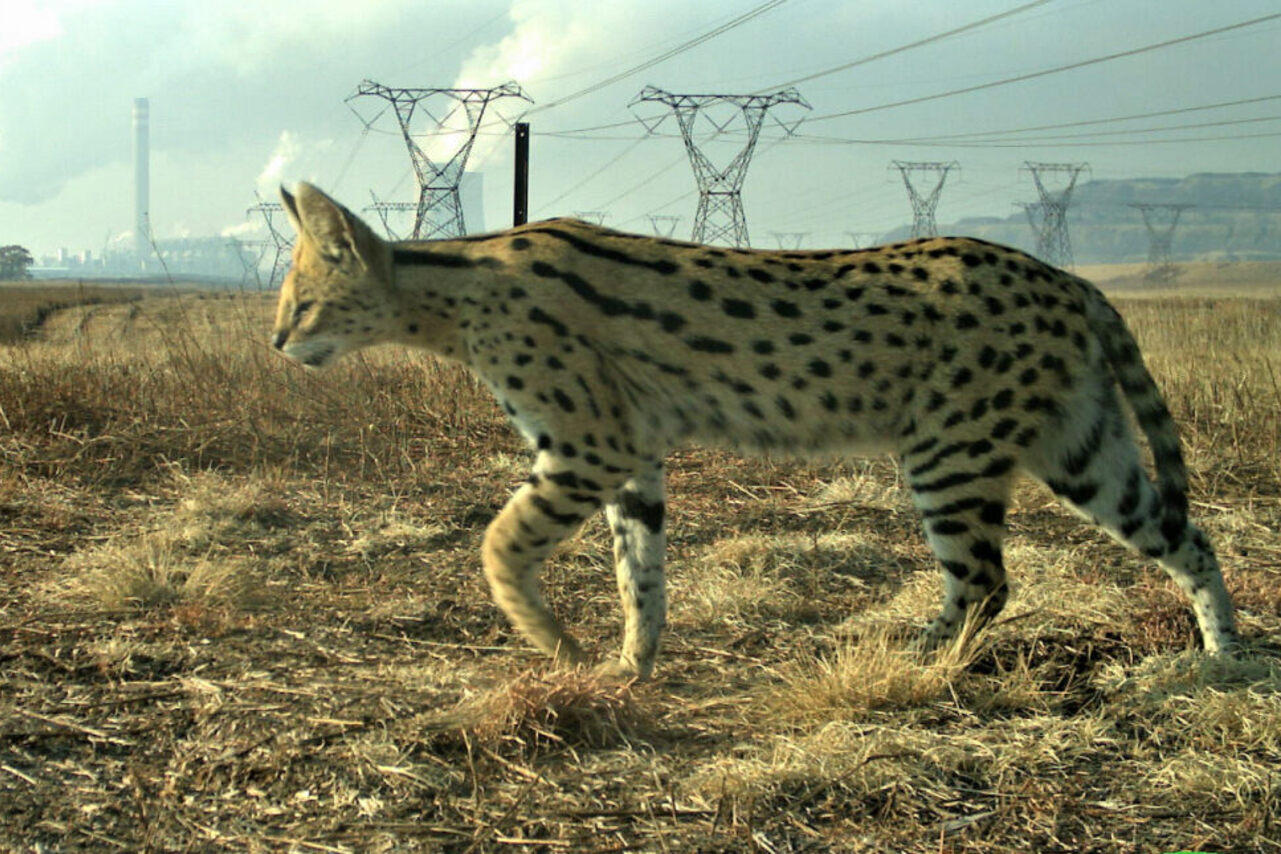 A serval, captured by a camera trap, stalks Secunda. Daan Loock
In This Story
Destination Guide

Secunda Synfuels Operations is a gray place, even by day. Located in the small town of Secunda, South Africa, around 87 miles east of Johannesburg, the coal liquefaction plant produces tens of millions of barrels of synthetic fuel, a variety of other petrochemicals, and enough carbon dioxide to make it one of the largest point sources for emissions in the world, according to Princeton’s Carbon Mitigation Initiative. Each day, the plant’s four enormous cooling towers paint the sky with enormous billowing clouds of steam. Beneath all of that, though, the plant’s grounds are just crawling with wildcats.

Almost a decade ago, one employee at Secunda Synfuels spotted something in the distance, a flash of yellow fur and black spots. A cheetah, maybe? It was a strange sight on the heavily industrialized grounds, which didn’t appear to be a friendly, healthy ecosystem, let alone one sturdy enough to support big cats. A group of researchers set out to track down these elusive critters, which, didn’t turn out to be cheetahs at all. To their great surprise, they found the Secunda plant is home to one of the densest populations of servals, a wild African cat that’s a bit smaller than a cheetah but just as elegant, ever recorded.

Daan Loock, a researcher at the University of the Free State in Bloemfontein, led the team and proposed a scientific study on Secunda’s servals. Loock, now the head of the Secunda Serval Research Project, took some camera trap photos of the elusive cats to the plant’s management to secure funds for a larger-scale study of the petrochemically inclined predators.

The plant was game, and in 2014, Loock and fellow researchers Samual Williams and Lourens Swanepoel from the University of Venda in Thohoyandou, set out to document the entire reclusive population around Secunda. They laid camera and live traps in the approximately 30 square miles of land between the plant’s buildings and an encircling fence. The area encompasses a variety of undulating grasslands interrupted by the occasional rocky outcrop or wetland. As the pictures started streaming in, the research team was bewildered by just how many cats they were seeing. Over the course of two years, the researchers photographed 61 unique individuals—a surprisingly high number. Servals have spot patterns as unique as fingerprints, which makes it easy to tell individuals apart. According to their extrapolated estimates, the Secunda area seemed to support more than one serval for every square mile, the highest density ever recorded. This held up year after year, indicating a stable population. They published their findings in Nature in November 2018.

So what keeps the servals there? First, and perhaps least surprising, is the rats, according to the study. Like any human-influenced area, Secunda swarms with a small, opportunistic prey animals. In the swamps of South Africa, these come in the form of vlei rats, large and shaggy critters that make a perfect meal for a small carnivore. The marshy meadows that support them are abundant in the wake of human disturbance, which also create the patchy, broken-up habitat the rats thrive in, the authors write. Secunda also hosts a population of guinea fowl, another species servals consider rather delicious.

There’s also the chain-link fence that encircles the plant, originally intended to keep humans off the potentially toxic industrial site. It also happens to keep out farmers and ranchers who see servals as a threat to livestock. Leopard communities, for example, only reach around 20 percent of their potential population density when they live in proximity to livestock, due to persecution by farmers, the authors write in the study. And finally, the fence shuts out larger carnivores that could outcompete the cats for their plump vlei prey, while letting servals and other medium-size animals pass through. Lions, hyenas, and cheetahs are out of the picture.

Before humans, carnivores sat comfortably atop of food webs around the world. But large carnivores have frequently been the first species to disappear when humans move into an area. That makes this highly concentrated serval population pretty remarkable, Williams says. Servals are elusive, but aren’t threatened or endangered in their sub-Saharan range. That doesn’t mean they’re clear of risk. The grasslands of South Africa are rich in coal, and have undergone a rapid transformation in recent years, according to the study, putting the serval’s preferred wetland habitats at risk.

But despite the rich potential for food and security for these cats, there’s no forgetting what Secunda Synfuels is. “There could potentially be costs to living in such a modified environment,” Williams says, pointing to evidence that noise pollution affects communication in populations of dwarf mongooses in the area, for example, as proven in a 2016 study of South Africa’s Sorabi Rock Lodge Reserve. “This, along with chemical pollution, has the potential to make life in these areas much more stressful and disease-prone than [for] servals living in less disturbed habitats.” Light pollution could be an issue as well—a potential disruptor of noctural hunting patterns and a possible topic for future study.

There are other places where industry and nature coexist, however uneasily, such as industrial Teeside in northeast England, where a nature reserve sits amid a nuclear power station, an incinerator plant, oil refineries, and a Saudi industrial chemical complex. When the study first came out, Williams reports, he heard that some scientists believed he and his colleagues were positing that such degraded industrial habitats are a good thing. He wants to set that record straight. “Nothing could be further from the truth,” he says, adding that one of the most important goals of conservation is to preserve intact, less-disturbed habitats.

The story of the servals at Secunda is a story of silver linings, of adaptation and survival. Williams hopes the research presents an opportunity for people and companies to make a conscious effort toward behaving in an environmentally responsible manner. “We are not saying that to conserve servals more industrial plants should be built,” he says. “But what I think is fascinating about the servals at Secunda is how they throw into sharp contrast just how adaptable wildlife can be, and how even huge industrial plants can contribute towards conservation.”

For Sale: A Bison's Skull Straight From the Ice Age

Low-cost seismometers could give rural communities an alert system, or begin to decipher elephant communication.
animals

The challenge of capturing something almost impossible to see.
genetics

Discovering the trait may help scientists protect the tuatara, which has been around since the dinosaurs.
Video

3:38
Want to see fewer ads? Become a Member.
From Around the Web
Atlas Obscura Trips
Wildlife Conservation and Contemporary Culture in South Africa
View This Trip
Thanks for sharing!