The entombed parrot of Woodlawn Cemetery. (Photograph by the author)

The Woodlawn Cemetery up in the Bronx has around 1,300 private mausoleums, many incredibly ornate and designed by some of the biggest architecture firms of the 19th and 20th century for New York figures who still have their names imprinted on our city. Earlier this month, Obscura Society NYC made its second visit to Woodlawn, but its first to actually go inside some of these mausoleums. As I was reading about each of the tombs we would see for my tour leading research, I realized this was going to be special: among the mausoleums was the resting place of Dr. Dunlop, his wife, and their parrot. Dunlop parrot in a glass-topped coffin. (Photograph by Ronny Preciado)

It has been quite a while that the parrot has been resting in its glass-topped coffin contained within a metal lockbox, and it has been reduced to a skeleton over the years. The Dunlops obviously loved their pet parrot enough to sneak by the cemetery laws against pet burials, and their ornate mausoleum even features avian touches like a parrot-themed stained glass window and feathery carvings on the exterior. The parrot, whose name has sadly been lost to history, actually outlived its owner Dr. Clark W. Dunlop, who unfortunately died quite insane. 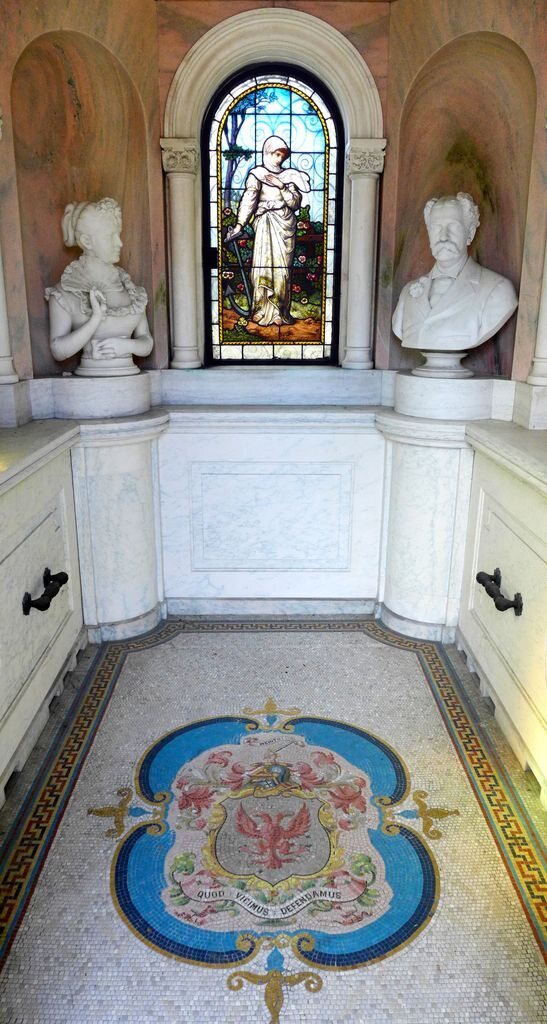 Inside the Dunlop mausoleum. (Photograph by Ronny Preciado)

Dr. Dunlop was a successful medical practitioner, publishing a popular book on common ailments and their cures called Dr. Dunlop’s Family Practice, through which he also marketed his United States Medicine Company’s products, such as “Dr. Dunlop’s King of Pain,” “Dr. Dunlop’s Quick Relief,” and “Dr. Dunlop’s Bromo Nervolene.” (Here’s an old advertisement for the drugs.) Through his profits he even built an elaborate mausoleum in 1894 where he would someday be buried, including a detailed mosaic on the floor, stained glass windows, and marble busts of he and his wife Eliza, who is carved holding opera glasses and a fan. However, he probably didn’t think the beautiful memorial would be holding his remains quite so soon. 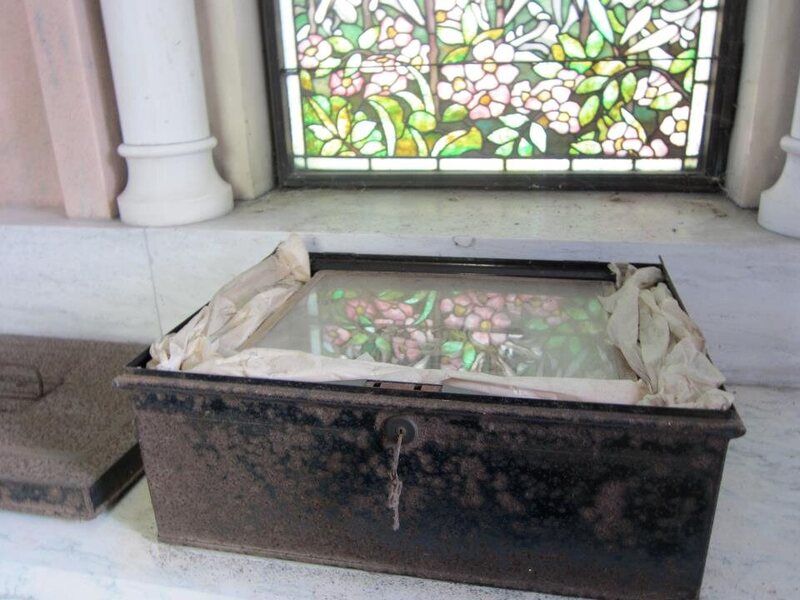 Box containing the Dunlops’ pet parrot in their mausoleum. (Photograph by the author)

It was in 1907 that Dunlop was diagnosed as insane, the results of a disease thought to be syphilis, and he was placed in an institution and given some “magic boots” to wear. Mental illness treatments being a bit arcane in the 19th century, to put it lightly, the boots were thought to cure lunacy by giving the wearer good posture, thus the steadiness of the feet steadying the brain (there were also some mysterious chemicals claimed to be in the shoes). Dunlop had no children, but his 22 nieces and nephews soon pounced on the opportunity to claim some of the institutionalized man’s fortune and court cases within the family ensued. (Here’s an article from the New York Times about the trial and the “magic boots.”) The boots, marketed by a man named Matthew H. Hilgert, didn’t work, and in fact would be the source of their own scandals and trials. Hilgert’s apparent rebuke to a woman whose son was unable to walk after using the boots was: “You needn’t to have taken the treatment. If I told you jump into the river, would you do it?”

Dunlop also got eletro-treatments and was injected with saltwater and, surprise, still didn’t get his mental bearings. He died in 1908, while his wife Eliza lived until 1932. The parrot was around until 1921, when it joined its poor mad master in their grand mausoleum.

While the Dunlop parrot was definitely a highlight of the Obscura Society’s adventure to Woodlawn Cemetery, it was definitely not the only amazing sight in the mausoleums we entered and the cemetery grounds we explored. Many, many thanks to the master of the mausoleum keys and Director of Programs for the Woodlawn Conservancy Cristiana Peña for joining us and coordinating our visit. Below are more images from our expedition to the most beautiful burial ground in the Bronx. (All photographs are by Ronny Preciado unless otherwise noted.) 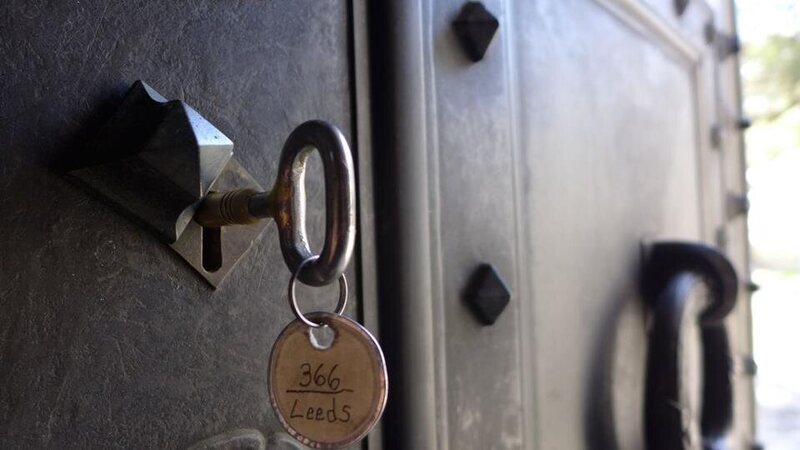 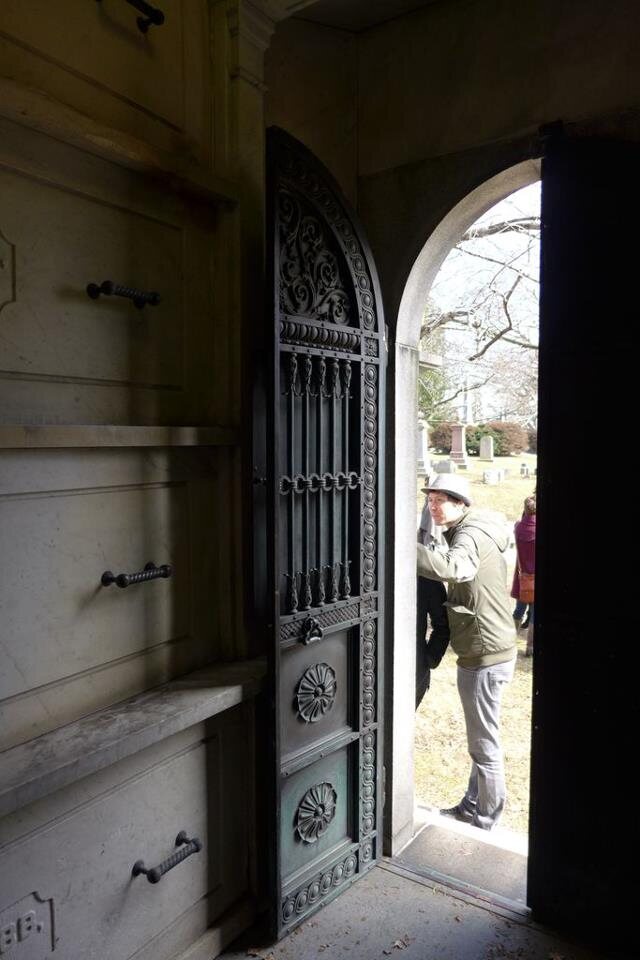 Inside the Webb mausoleum. 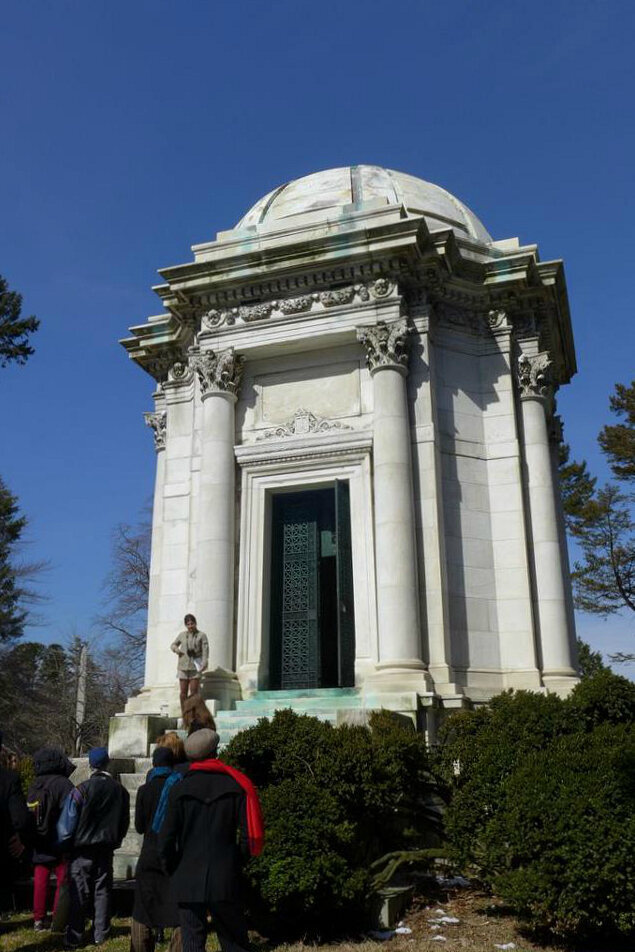 The Taylor mausoleum, designed by by McKim Mead & White. 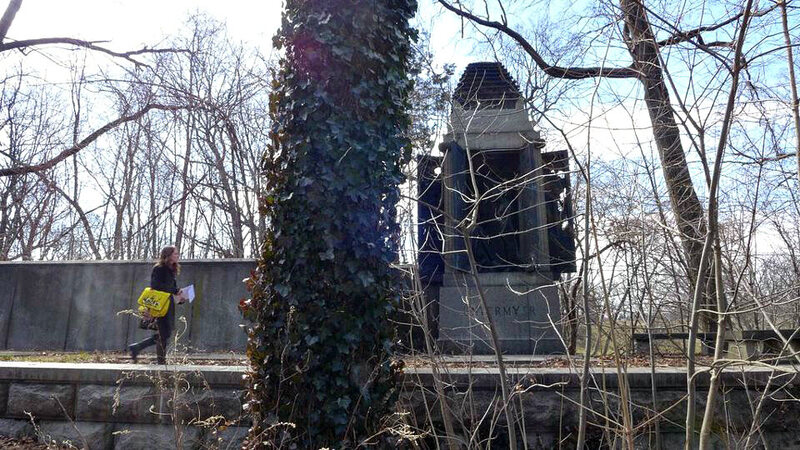 Walking to the Untermyer memorial, which opens on three sides. “The Outcast” by Attilio Piccirilli “Memorial to a Marriage” by Patricia Cronin. (More information on this amazing sculpture here!) There was still some snow on the ground from the ends of winter. 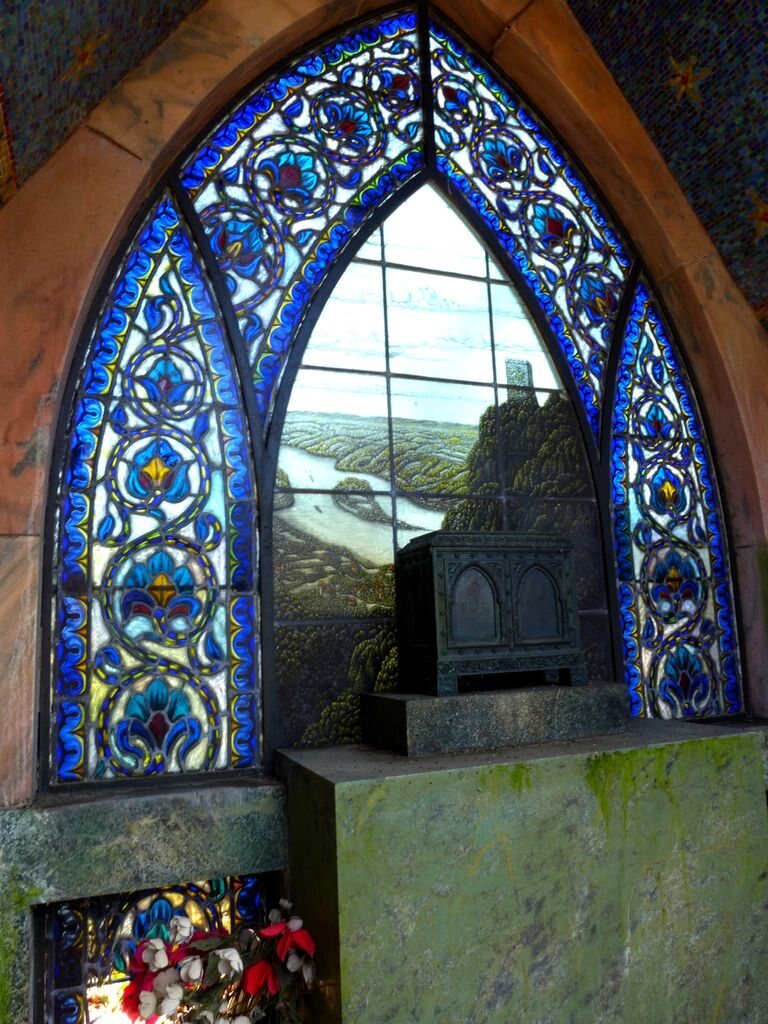 The Bache mausoleum, a replica of Trajan’s Kiosk in Egypt. 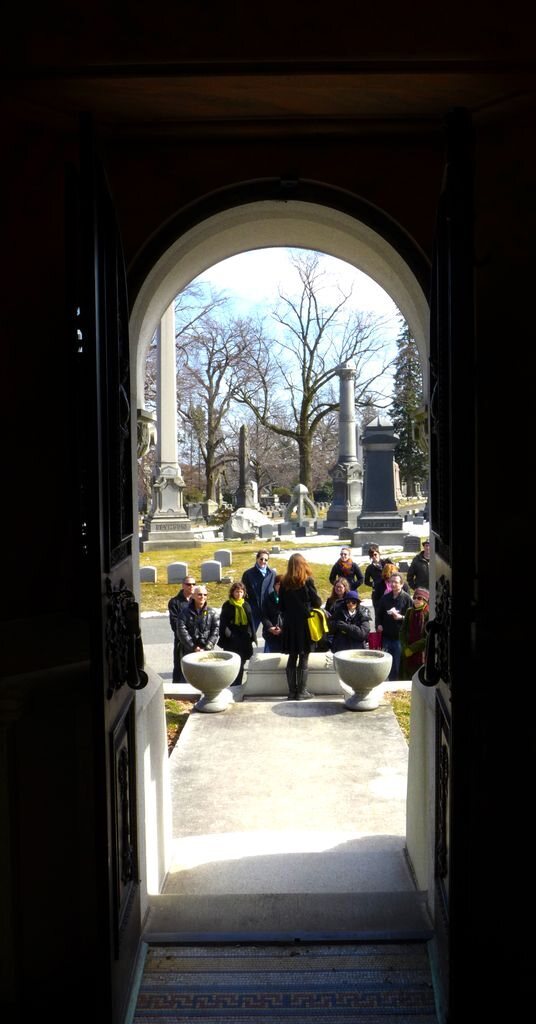 View from the Dunlop mausoleum. Exterior of the Belmont Mausoleum, an exact replica of a chapel designed by Leonardo da Vinci in France. Inside the Belmont Mausoleum. Key to a mausoleum. (Photograph by the author)

Thanks to Doug Keister’s excellent book “Stories in Stone New York” for background information on Dr. Dunlop and his parrot.

EMBARK ON YOUR OWN EXPLORATION: WOODLAWN CEMETERY, The Bronx, New York

Morbid Monday : Buried in a Lion - The Fabulous Tradition of Ghana Figurative Coffins