In 1930s New York, the Mayor Took on the Mafia by Banning Artichokes - Gastro Obscura 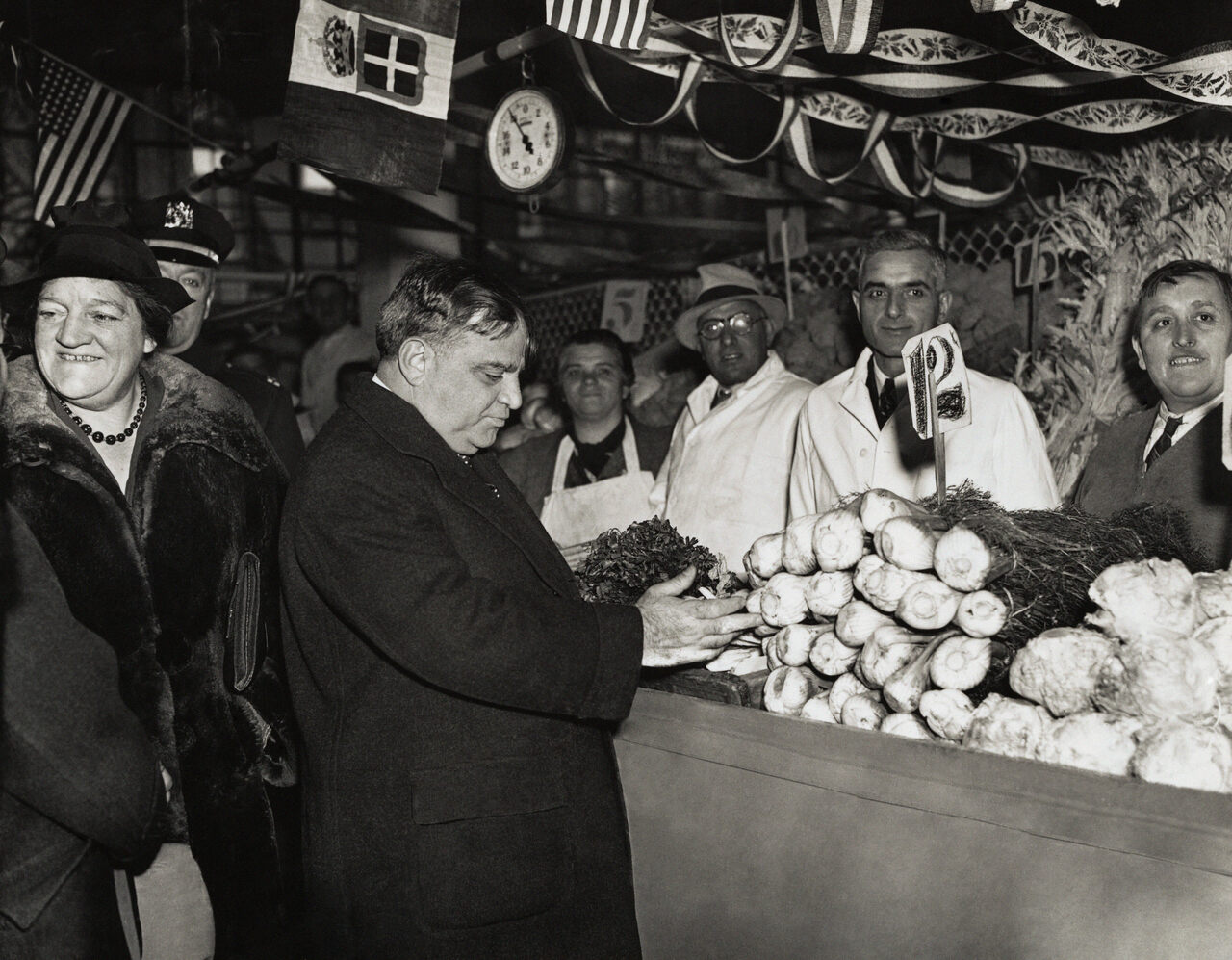 In the early hours of December 21, 1935, New York mayor Fiorello LaGuardia walked into the Bronx Terminal Market with a cadre of cops. As the police played a horn fanfare, he hopped onto the back of a vegetable truck and addressed the assembled farmers and peddlers. Starting December 26, New York City would institute a total ban on the sale, display, or possession of a commodity that posed a “serious and threatening emergency to the city.” This substance, at the time available in any city market, was controlled by “a monopoly of doubtful legality” (in other words, the mafia). To control its price and distribution, these criminals were engaged in violence and intimidation that the tough-on-crime mayor wanted to root out.

The product in question was the small, or baby, artichoke, a food introduced to the city just decades earlier and especially beloved by its Italian Americans and Italian immigrants.

Even then, some observers found LaGuardia’s claims about a vast artichoke underworld bizarre. “It is impossible not to conclude the world today is a bit mad,” a reporter covering the ban for the New York Herald Tribune wrote.

But LaGuardia was right. By 1935, the Sicilian American mafia had controlled the American artichoke market for at least two decades, wresting millions of dollars from growers, distributors, and consumers. And this was just one of their food-based rackets. Many other agromafia operations, which profited from citrus fruits, olive oil, avocados, and more, persisted or emerged over the following decades. In fact, there is a good chance that you—regularly and unwittingly—eat foods that have passed through artichoke cartel-like operations.

Artichokes have been a hot commodity in the Mediterranean since the age of antiquity, especially among Italians. (In the first century, Romans pickled artichokes in honey and feasted on them year round.) But artichokes are finicky plants, thriving only in specific climes. So while early Americans—including George Washington and Thomas Jefferson—cultivated and appreciated artichokes on a small scale, a U.S. industry only emerged around 1900, when Italian immigrant farmers in northern California realized the region’s potential for artichoke cultivation. Today, around 99 percent of American commercial artichokes come from California, mainly from Monterey County.

Realizing that Italian immigrants would pay a pretty penny for artichokes, Californian farmers sent their produce east to Boston, New York, and Philadelphia. By 1935, Monterey County’s choke market grossed about $666,000 per year, or $12.5 million in 2020 dollars.

At some point in the early-to-mid 1910s, the fast-growing artichoke trade caught the eye of the Morello-Terranova crime family, one of the first major mafia operations in New York. At first, it seems the family just used its control of rail line entry points into New York to impose an informal import tax of $25 to $50 ($600 to $1,200 in 2020 dollars) per carload of California artichokes. “It was a transportation racket, effectively,” says Mike Dash, who wrote about the Morello-Terranova clan and their interest in artichokes in The First Family: Terror, Extortion, Revenge, Murder, and the Birth of the American Mafia.

But by the 1920s, newspapers started describing mafia agents in California intimidating growers into limiting crop sizes and selling at deflated prices. One account even claimed the mafia used small aircraft and the threat of aerial gas bombings to intimidate farmers. (Dash says the mafia was established in California by 1914, and the Morello-Terranova clan led the pack in developing cross-country mafia connections, so these stories are plausible. But mafia-history writer Tom Hunt suspects many of these accounts were overblown.) By 1935, the mafia made sure every artichoke came into New York through its Union Pacific Produce Company for a dismally low $6 per crate, and that wholesalers and vendors bought their chokes at a 30 to 40 percent markup. By the time of LaGuardia’s ban, prosecutors later alleged, the New York mafia was making $333,000 a year ($6.25 million today) on artichokes. Similar operations reportedly popped up in other East Coast cities.

Why did artichokes appeal to Ciro Terranova, the family’s “Artichoke King,” who also ran lucrative booze, gambling, and union-fixing operations; lived a flashy life, driving around in an armored sedan; and was reportedly friendly with notorious gangsters such as Charles “Lucky” Luciano and Al Capone? Well, they were actually a classic mafia target.

According to a number of historians, the mafia and its brand of intimidation-based, fleece-the-sheep-but-don’t-kill-it crime first emerged in the late 1800s, when Sicilian criminals formed groups to profit from the island’s growing lemon trade. (Others point to alternative industries such as mining.) Thereafter, they fixed prices or collected taxes on every business they could. Dash notes that the Morello-Terranovas, in New York, had several rackets involving dairy, meat, and produce. In 1914, they made $100,000 ($2.5 million today) just from fixing Manhattan chicken prices. In Chicago, the Capones became milk-and-cheese kingpins.

“Artichokes were an anomaly,” argues mafia-history writer Christian Cipollini, only “in the sense that headlines were made rather frequently.” Most food rackets flew under the radar.

By the time LaGuardia clambered up on a vegetable truck, the mafia’s artichoke racket was well known. But it was also weakening, which is likely why the mayor chose to act. As the mafia pursued more lucrative ventures during the Prohibition era (1920 to 1933), they spent less time worrying about artichokes. And after Ciro allegedly lost his nerve during a hit at a Coney Island restaurant in 1931, a new and younger generation of mafiosi seemingly forced him to relinquish most of his operations, including artichokes. His successor, the obscure Joseph Castaldo, soon faced a federal antitrust indictment, along with the United Pacific Produce Company as a whole. LaGuardia, who was elected in part for his promise to take on the mob, had a penchant for flashy stunts to show the people he was hard at work. The artichoke ban would probably risk little, net headlines, contribute to the already well-advanced antitrust case, and give LaGuardia the quick and easy win he (and the city) needed.

Sure enough, LaGuardia’s ban lasted three days before the stranglehold started to let up, leading him to lift it in turn. In early 1936, Castaldo and company got off on charges of using threats to establish a monopoly on a mistrial, but Castaldo shut down the UPPC and pled guilty to another antitrust charge soon after. Ciro, marginalized and functionally banned from New York by vigilant cops, became a joke. When he died in 1938 at age 49 of two consecutive strokes, the New York Times announced “former power in artichoke trade penniless as paralysis ends his life.” And thanks to all of the press surrounding LaGuardia’s ban, interest in artichokes popped off well beyond the Italian-American community. Everyone prospered but the criminals.

But the mafia never gave up its food rackets. In the 1990s, Dash points out, an informant on the Lucchese crime family claimed they were still running rackets on wholesale produce in Brooklyn and the Bronx. In Italy, organized criminal groups reportedly made about $25 billion in 2017 on agricultural rackets. A fair chunk of that comes from fraud—passing off cheap swill as high-end goods, like the fake extra virgin olive oil export ring tied to the ‘Ndrangheta crime syndicate. But a lot of this crime looks like the artichoke racket. In one operation, a criminal clan in the Italian town of Círo used intimidation to force restaurants in Italy and Germany to buy their produce at jacked up rates until January 2018.

Italian food rackets, though, are hardly unique. Notably, Mexican drug cartels have diversified by, for example, extorting avocado farmers and distributors, or seizing their land outright. Some crime researchers argue that agromafia activities have been on the rise due to law enforcement successes against organized crime in major cities and in the high-profile drug trade.

Yet there’s little chance of a LaGuardia-style stunt today. Given that, at least in countries such as the United States, food is now a much smaller share of consumers’ budgets, and the number of suppliers and options is much greater, modern food rackets are rarely as disruptive for customers. These schemes may also feel trivial compared to the crime boogeymen of our era—drug and human trafficking, gang violence, and their ilk. So there is less incentive for politicians to expend major bandwidth or capital highlighting them. On top of all of that, if a mayor banned avocados in New York City today, even for a day, for a good cause, it’s safe to bet the torches would come out.

And that is a real shame. Because for all its absurdity, the artichoke racket exemplified a shockingly common form of crime, then and now. And we could use another grandstanding stunt to wake us up to that.

Police suspect a rival grape-grower got a little jelly.
restaurants

This family-owned bakery is one of the last places in Brooklyn to sell the Nation of Islam–inspired bean pie.
New York, New York

More than 250 sakes are available in an izakaya hidden in the basement of a Midtown office building.
Want to see fewer ads? Become a Member.
Related

Nations around the world are fighting the fragrant crime.
Read more
Thanks for sharing!