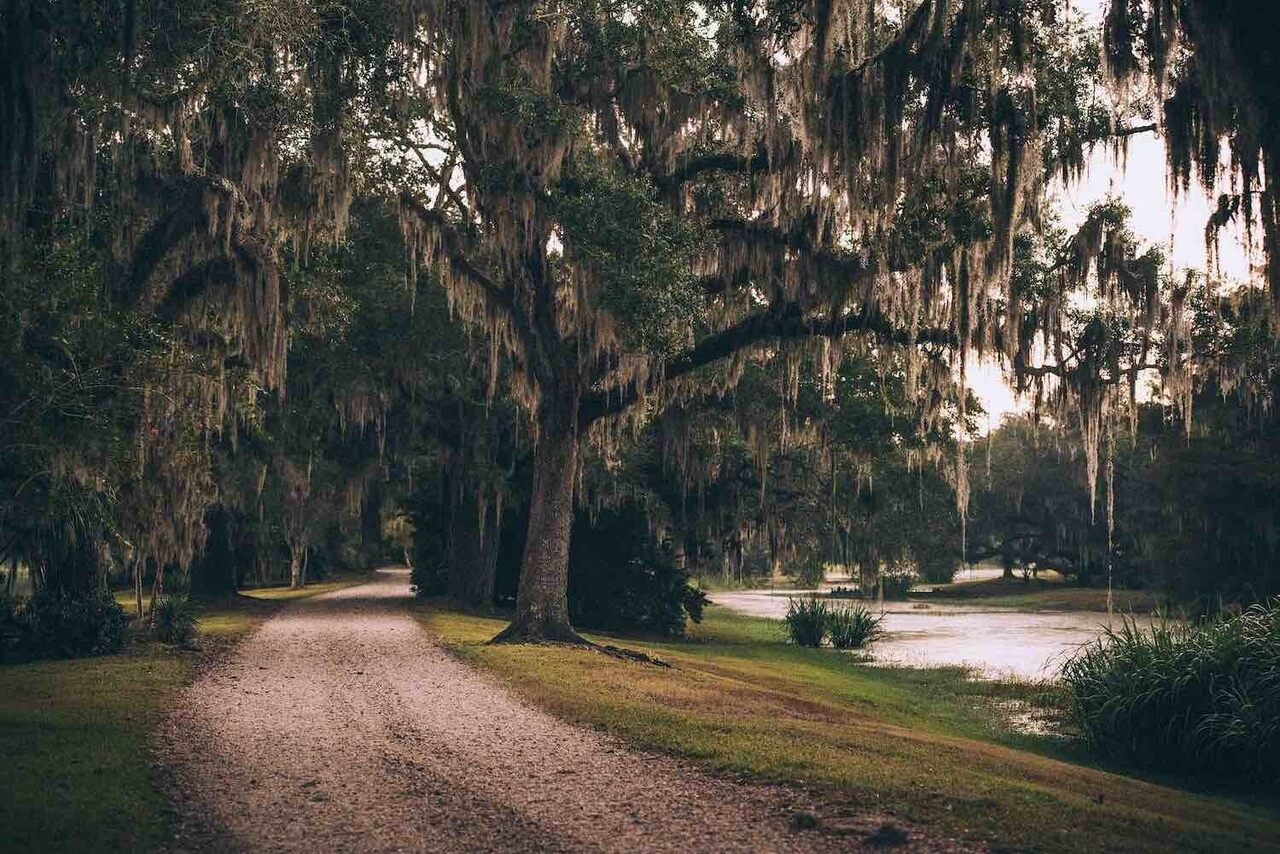 For 150 years one family has been producing the iconic hot sauce on a bayou island made of salt.

This story was originally published by The Guardian and appears here as part of the Climate Desk collaboration.

Avery Island, a dome of salt fringed by marshes where Tabasco sauce has been made for the past 150 years, has been an outpost of stubborn consistency near the Louisiana coast. But the state is losing land to the seas at such a gallop that even its seemingly impregnable landmarks are now threatened.

The home of Tabasco, the now ubiquitous but uniquely branded condiment controlled by the same family since Edmund McIlhenny first stumbled across a pepper plant growing by a chicken coop on Avery Island, is under threat. An unimaginable plight just a few years ago, the advancing tides are menacing its perimeter.

“It does worry us, and we are working hard to minimize the land loss,” said Tony Simmons, the seventh consecutive McIlhenny family member to lead the company. “We want to protect the marsh because the marsh protects us.”

Simmons allows a silent pause as he mulls a situation where Tabasco is forced off the island. “We don’t think it will come to that, but we are working to do everything we can to make sure it won’t happen to us,” he said. “I mean, we could make Tabasco somewhere else. But this is more than a business: This is our home.”

A geologic oddity, Avery Island rises to 163 feet above sea level, making it a towering giant amid the supine flatness of Louisiana’s coast. The 2,200-acre island—more accurately a hill of buried salt surrounded by bayou and marsh a couple of miles inland from Vermilion Bay, an inlet of the Gulf of Mexico—has long provided a sturdy home to Tabasco but now faces the danger of being marooned.

The Avery Island marshes are retreating by around 30 feet a year as salt water seeps in, ushered in by canals dug by the oil and gas industry and the level of the land itself, which is gradually sinking by around a third of an inch a year. The salty brine kills off vegetation, loosens soils, and accelerates erosion.

Fierce storms clatter into what’s left of the marsh, which is also being slowly drowned by a warming ocean that’s rising faster than almost anywhere else in the world. A further sea level increase of two feet, almost certain given the warming that’s already occurred, will leave only the lofty core of Avery Island dry, according to the National Oceanic and Atmospheric Administration.

“The marsh stands between us and Vermilion Bay, and we don’t want to be right on the bay,” Simmons said. “We have to be very aggressive about dealing with the land loss. We almost can’t work fast enough.”

The threat posed to Tabasco is replicated along much of Louisiana’s coast, where a football field of land is lost every 100 minutes. Around 2,000 square miles of land, roughly the size of Delaware, has vanished from the state since the 1930s due to a cocktail of maladies and self-inflicted wounds, stemming from the overdevelopment of the Mississippi River and an unquestioning embrace of extractive drilling, topped off by the wrenching global consequences of climate change.

The U.S. has already been stripped of half of its wetlands since Europeans arrived and Louisiana, which accounts for a bulk of these losses, is on course to lose all of its wetland within two more centuries, according to the U.S. Geological Survey.

A master plan set out by the state government last year forecast a further 2,250 square miles of Louisiana could be lost over the next 50 years, forcing 27,000 buildings to be flood-proofed, elevated, or bought out.

The plan sets out billions of dollars in work building protective seawalls, restoring marshland and increasing the amount of nourishing sediment carried to wetlands by the Mississippi, which hasn’t been left to meander naturally since New Orleans was established 300 years ago. Thousands of people still face being relocated, but while state authorities have acknowledged this fate they have yet to grapple with the vast cost and emotional whiplash it will entail.

“You go to Plaquemines parish and people will say they are already flood-proofed because they can pull their boat up to their door,” said Rudy Simoneaux, an engineer at the Coastal Protection and Restoration Authority. “It asks a lot of a shrimper or a crabber to relocate inland to Baton Rouge. They depend on the water. People are prepared to just rebuild and rebuild.”

The western half of Louisiana, where Avery Island sits, is particularly vulnerable as it is starved of the wetland-creating sediment dispersed by the Mississippi and Atchafalaya rivers. There “aren’t many options” for the region under the master plan, Simoneaux conceded.

“The area doesn’t have the materials to build wetlands—it has been torn to pieces by canals and pipelines and it has no natural barriers, so hurricanes come pounding in unobstructed,” said Oliver Houck, an expert in land loss at Tulane University.

“It is a ripped-up rug. It would take decades to put it back together, even without sea level rise. Avery Island is going to become an actual island, there won’t be much left. The state has decided to put all its eggs into restoring the eastern part of the state. I hate to use the words ‘written off’, but those coastal communities are on their own.”

Unlike nearby residents who have resorted to rudimentary house elevations to stay above the foaming surf, the McIlhenny company has financial muscle to swing at its relentless foe. After Hurricane Rita turned much of the Tabasco production area into a pond in 2005, the company erected a 17-foot earth levee, complete with pump system, to wrap the red brick factory in a protective hug.

It has thrown itself into the task of wetland restoration by planting hardy cord grasses, refilling canals, and erecting weirs that halt the advance of salt water. Wildlife, such as black bears, alligators, and snowy egrets, have a protected area to roam on the island.

Climate change has cast a shadow over several everyday staples, menacing the production of chocolate, the harvesting of hops for beer, the growing of coffee beans. Tabasco has no plans to join this list, with the company insisting the production of its peppers isn’t at risk and that its ancestral home can be safeguarded.

“We worry about anything that impacts our land,” said Simmons, a craggy, genial man who wears pressed trousers and slathers Tabasco sauce on virtually any food bar his morning cereal. Paintings of peppers are displayed alongside the wooden ducks that sprout from his shooting trophies. “That’s why we are working so hard on this.”

Pepper plants used to blanket the slopes of Avery Island until the 1960s, when the property switched to seed cultivation and shifted the bulk-growing and mashing of peppers to various South American countries. The pulped peppers return to Avery Island and are aged for three years in stacked oak barrels towering in a pungent, cobwebbed warehouse before salt and vinegar is added in huge vats.

Today, this company that was born shortly after the death of slavery pushes 750,000 bottles of product off its rattling production line each day, levered into cardboard boxes by mechanical arms and sent to more than 185 countries—the Japanese are particularly voracious consumers, dousing pizzas and spaghetti.

Throngs of tourists visit a museum and shop that plays off this heritage. Many of them come straight from the other attraction two hours’ drive to the east, New Orleans, which itself faces an existential crisis despite its huge investment in protective levees after Hurricane Katrina crunched into the city in 2005.

The problem is apparent from the air, with much of the wetland that would buffer New Orleans from another Katrina in a state of decay, rotting and curling up like chewed cloth, dotted by boats and trucks that were swept away by the huge storm and never salvaged.

“We’ve had 300 years of bad decisions,” said David Muth, director of Gulf restoration at the National Wildlife Federation. The lower reaches of the Mississippi have long been aggressively channeled via levees and other barriers, with this process accelerating in the 1930s after a major flood prompted Congress to authorize further intervention. Distributaries were severed and wetlands were drained or cut apart for farming, cypress logging, and oil and gas drilling.

The result has been the choking off of sediment carried by the river to the marshes, causing the delta peat, grass, and shrubs to dissolve away to open water in places.

“This area has been neglected for so long,” said Happy Johnson, head of a community sustainability group in the Lower Ninth Ward neighborhood, worst damaged by the hurricane. He is concerned about lack of consultation locally.

“There is very little trust in the government because there isn’t consistent engagement with communities of color. New Orleans is 60 percent black. How can you restore the wetlands and not have black and brown people involved? You can’t save a place with half the people.”

There are signs of hope, at least environmentally. Recent diversions of sediment have provided a jolt of growth to patches of the delta, a restoration that would be further bolstered by the master plan’s projects.

The branching wetlands, with white pelicans soaring overhead, remain an ecological wonder, persisting despite the scars of pipelines and the ongoing plight of its native communities, such as Isle de Jean Charles, that will be among the first climate change refugees in the U.S.

Why Eating Insects Is an American Tradition

A study digs up the origin of the single species that gives us turnips, bok choy, broccoli rabe, and more.
trees

Freezing the trees, blossoms and all, may be the only way to save the crop.
poison

“If you can’t gather shellfish then you’re going to starve.”
islands

The Elaborate Yam Houses of the Trobriand Islands

Years of drought have left them tragically empty.
Video • PinDrop