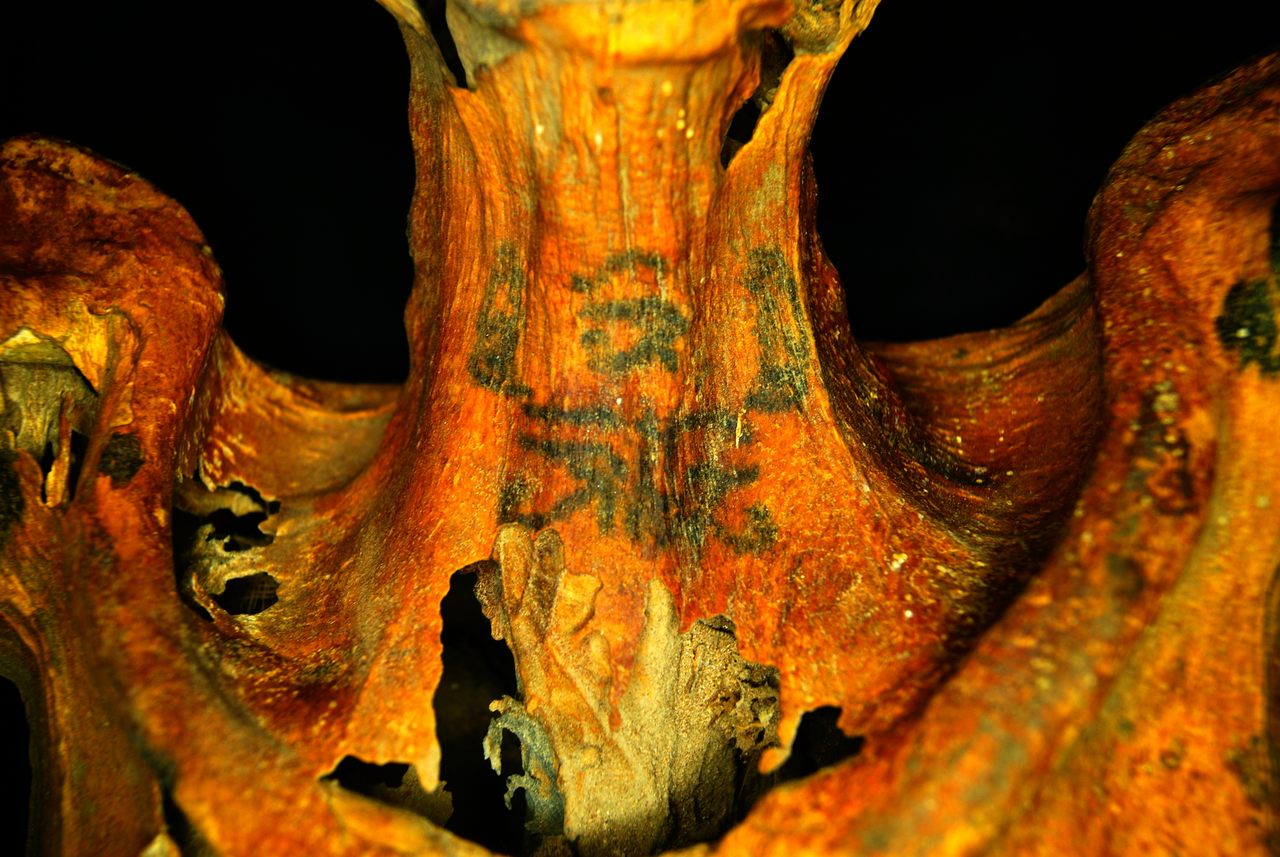 One of the mummies had more than 30 tattoos, including this wadjet on her neck. Courtesy Anne Austin
In This Story
Destination Guide

Egypt’s Valley of the Kings is famous for its grave sites, hewn directly into the sedimentary rock on the bank of the Nile, from the grandiose burial chambers of Ramesses II to the imposing edifice of Hatshepsut’s tomb. Much is known about these pharaohs, but far less is known about the nameless thousands who hauled, carved, and painted their pharaonic legacies. Many of the valley’s workers lived in Deir el-Medina, a sprawling UNESCO World Heritage Site that has revealed extensive information about how the grand structures of ancient Egypt were made, mainly through the tens of thousands of scroll fragments that have been found on the site, alongside the mummies of some of those laborers and artisans. Now, infrared technology is being used to study those mummies, and add knowledge to a fairly obscure aspect of Egyptian culture: tattooing.

“One complication with the textual record is it biases our understanding of the past to what was recorded,” says Anne Austin, a bioarchaeologist at the University of Missouri-St. Louis who studied the Deir el-Medina mummies for three years while working with the French Institute of Oriental Archaeology in Cairo. “These tattoos reveal new information that does not appear in the textual record and give us the potential to better understand women’s experiences in the village.”

Evidence of ancient tattooing appears around the world, but is mostly hard to come by. It’s difficult to understand how widespread the practice was because of how skin preserves in the archaeological record, though depictions of ancient tattoos abound in artworks from places as far flung as Japan, Papua New Guinea, and Romania. Nevertheless, some actual human remains have managed to make it to today with their ink intact. A Scythian woman with elaborate animal tattoos was found in a fifth-century BC burial mound in disputed land between Russia and China in 1993. The famous 5,000-year-old Italian “Iceman,” Ötzi, bears the world’s oldest tattoos, in the form of geometric patterns, the purposes of which are still debated. For ancient Egypt, where skin can often survive well because of mummification, and where many “tattooed” figurines have been excavated, only three tattooed mummies from pharaonic Egypt had been found—at least until the latest discovery. The infrared work on Deir el-Medina has identified tattoos on seven mummies, all women.

“The mummification process colors the skin and obscures the tattoos from being visible,” Austin says. “Infrared is a longer wavelength than visible light, so it can penetrate deeper into the skin than visible light and return information about what is under that surface.”

The mummies date to the New Kingdom’s Ramesside period, about 3,000 years ago. The team found tattooed patterns and figures. Some depict animals such as cobras, cows, and baboons, and others resemble familiar Egyptian symbols such as the wadjet, or Eye of Horus. Other tattoos appear to be hieroglyphs, perhaps reflecting the roles of these women in the community.

“It seems that women were primarily being tattooed,” says Salima Ikram, an Egyptologist with the American University in Cairo who helped Austin scan the mummies. “The [tattoos] from Deir el-Medina are on women associated with temples as priestesses, who had roles in singing and dancing and performance.”

The most eye-opening find was a single mummy that bore at least 30 tattoos, based on the current analysis. Some of the tattoos, adorning the arms, chest, and neck, were visible with the naked eye—and sound more Brooklyn than Egypt. Many of the tattoos are thematically linked with the Egyptian goddess Hathor, a sort of predecessor to the goddess Isis, who is associated with fertility, motherhood, and love. Much is still unknown about the tattoos—how they were made, or what with—or the women who rocked them. In the world of tattooed mummies, this find is a bonanza, but in the world of science it’s what’s called a small sample size. And there’s a lot of Egyptian history out there.

“Given how sparse the data currently are, it is hard to know how tattooing developed and changed over Egyptian history,” Austin says. “Predynastic mummies are thousands of years older than New Kingdom ones, so understanding the difference between the tattoo practices of the New Kingdom and the predynastic would be like understanding the difference in practices between today and the Romans.”

Infrared imaging has proven to be a useful tool, but it doesn’t see all. Some resins used in mummification conceal tattoos from that technology as well, according to Renee Friedman, a research curator at the British Museum who found tattoos on predynastic mummies in 2018, 120 years after their arrival at the museum. “It is hoped that other technologies will be found that might provide better visibility,” she says. There could be many more ancient Egyptian tattoos out there, hiding in plain sight.

For now there’s a lot more work to be done with the mummies from Deir el-Medina, including looking for more tattoos, studying the ink used in them, and better understanding the significance of the body art.

“I will continue working at Deir el-Medina in January to identify whether more tattoos are present. I anticipate we will continue to find more tattoos at the site,” Austin says. “My hope is that through a larger corpus, we can better understand what this tradition meant to the Egyptians.”

John Beasley Greene photographed early European archaeology in Egypt—but he paid little attention to those who lived there.
mummies

Decoding the Tattoos of Ancient Egyptians

Here's what the shapes and symbols on that mummy's arm mean.
mummies

Found: A 2,500-Year-Old Mummy in a Seemingly Empty Coffin

Italian Renaissance Aristocrats Were Susceptible to Cancer, Too

Mummified evidence that cancer might not be a disease of the modern world.
Want to see fewer ads? Become a Member.
From Around the Web
Atlas Obscura Trips
In the Footsteps of Pharaohs: Exploring Ancient Egypt
View This Trip
Thanks for sharing!