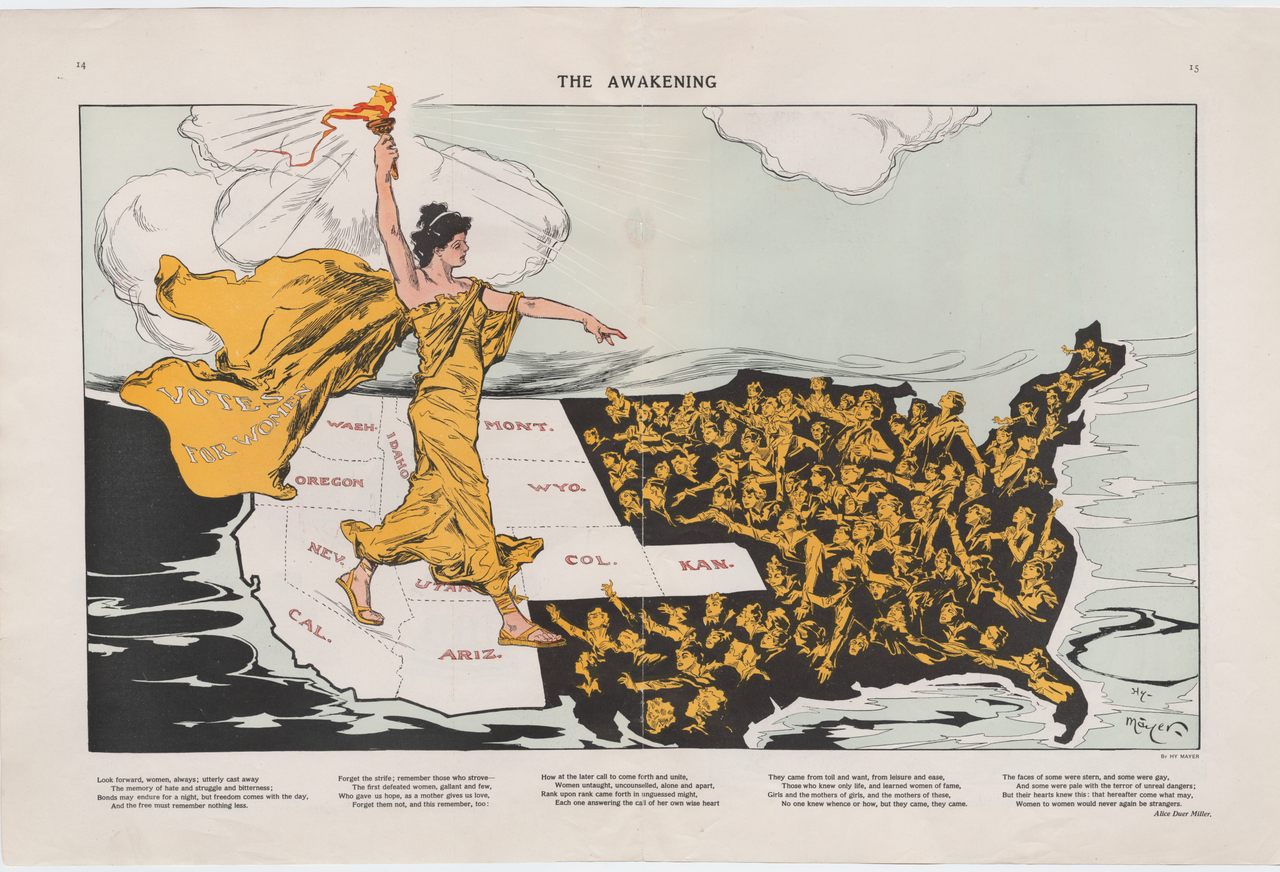 You might have seen what today’s electoral map would look like if only women voted. Well, here’s another version of that map—a “suffrage map” from early 20th century America. Suffrage maps played an influential role in the fight for women’s suffrage, and “The Awakening,” above, is one of the most striking examples.

Published in Puck Magazine in 1915 and illustrated by German-born artist Henry Mayer, the map depicts women with faces turned to the light that Lady Liberty is bringing east. Her flowing robes are emblazoned with the words, “VOTES FOR WOMEN.”

By 1915, the Western states marked in white had already given women the vote; another suffrage map of the time was labeled “9 States of Light Among 39 of Darkness.” In this map, you can see the desperation on the women’s faces and in their movements, as they stretch themselves towards the votes that ought to be theirs.

The map appeared during the Empire State Campaign, which was fighting to amend New York’s gender-based voting restrictions, which it accomplished in 1917.

“Are political rights to be a question of geography?” one campaign committee flier asked. “The women of New York will be eligible to vote for the next President if the men of the Empire State are as generous-minded as the men of the West have been.”

Maps like this one were printed on posters, pamphlets, paper fans, banners, and broadsides to be handed out across cities and communities, snowballing into powerful movements that broke free of family parlors and spread to the streets.

Suffrage maps were painted on walls and positioned in prominent public places, such as state buildings, banks, and businesses. They showed up on drinking glasses, baseball programs, parade floats, and sandwich boards.

In a 1913 essay called ‘‘Walks and Wins with Two-Ft. Map,” one suffragist noted that “Men are much impressed by the ocular proof of our advance”:

I wear it [the suffrage map] sandwich fashion, and walk about my crowded streets. It attracts everyone’s eye, and an explanation of the colors excites deep interest and makes a great impression.

Impressed, perhaps, but not always convinced by the actions of other states—a man from Massachusetts wrote to the New York Times in 1913, after it published an earlier suffrage map, “…not a single State east of the Mississippi River had adopted woman suffrage: every ‘white’ State on the suffrage map is in the weird and woolly West.”

Additionally, the coloration of the map is problematic in its treatment of race, with its focus on white women only. (Black women did not get the vote until 1920, no matter which coast they lived on). The women pictured in “The Awakening” belonged to an upper middle class movement—if you peer closely, you’ll see their hairstyles and headpieces are finely fashioned.

Yet maps like this one were a shared anchor between women across the country, as well as a powerful form of media and advertising. The suffrage maps were soon pervasive, broadly referenced, and cited in publications across the country.

If you look closely under the map itself, you’ll see a poem echoing many of the thoughts and fears women voters still experience today. It is a work by Alice Duer Miller, a novelist, playwright, screenwriter, and feminist whose work includes Are Women People? A Book of Rhymes for Suffrage Times.

With election day looming over us tomorrow, we leave you with this powerful map and the final verses of Miller’s poem:

The faces of some were stern, and some were gay,
And some were pale with the terror of unreal dangers;
But their hearts knew this: hereafter come what may,
Women to women would never again be strangers.

Whatever your politics, the fact that a 102-year-old woman, born before women could vote, just cast her ballot for the country’s first female presidential candidate is monumental.

A Short History of the Awkward Concession Phone Call

The first such call occurred in 1968.
politics

Even feminists hesitated to support a female candidate.
murder

An exhibit is taking a closer look at the racist Ocoee Massacre in Florida, 100 years after it took place.
politics

The Italian Village of La California Hosted Its Own American Elections

It was a gag, but the community has long been tied to its namesake on the other side of the world.
Want to see fewer ads? Become a Member.
From Around the Web
THE GASTRO OBSCURA BOOK
Taste the World!
An eye-opening journey through the history, culture, and places of the culinary world. Order Now