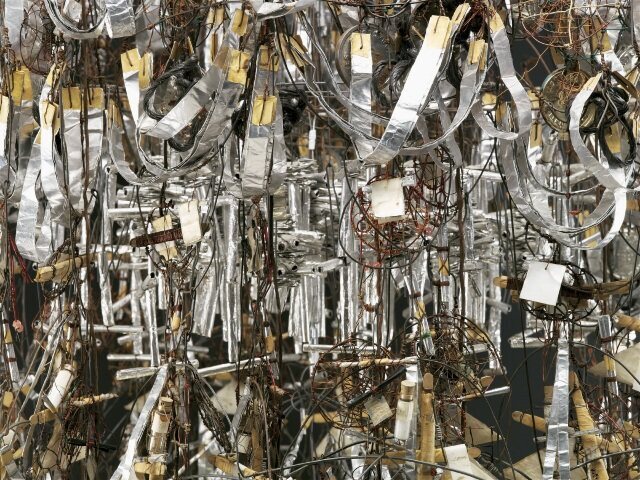 Out in a shed on the plains of Nebraska, a man named Emery Blagdon built a machine that he hoped could harness the power of the Earth to heal the pains of the people on it. Now that “Healing Machine” is being exhibited at the John Michael Kohler Arts Center in Sheboygan, Wisconsin.

“It’s really lovely to see someone walk right into the ‘Healing Machine’,” said Karen Patterson, assistant curator at the Kohler Arts Center. “You’re faced right with it, you’re stuck with this feeling of awe, and you immediately want to know more. No one ever walks in and walks out.”

Blagdon started building “The Healing Machine” in 1955, following the deaths of both his parents. The memory of their suffering never really left him, and was likely an inspiration in trying to find a way to ease such horrible disease and pain.

Before he came back to his hometown of Callaway, Nebraska, for good in the 1930s to care for his dying mother, he wandered the West on boxcars, and over his decades of travel witnessed the beauty of nature, a major influence on his later work. His art started with experiments bending hay-baling wire, and then moved onto more elaborate chandelier-like objects and paintings that he built into a complex sculptural installation. 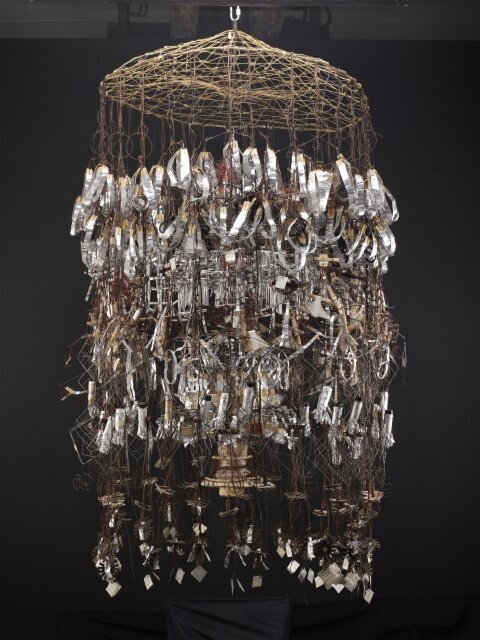 The hundreds of components were carefully positioned to best capture the Earth’s electromagnetic energy, so that walking into the “machine” would help alleviate internal pain. Using wire, masking tape, sheet metal, aluminum foil, waxed paper, broken televisions and radios, and things acquired at estate sales and auctions or just around the farm, he constructed the elaborate hanging sculptures of the “Healing Machine.” He also worked with delicate materials like butterfly wings and poplar leaves, as well as more direct healing materials like metals, salts, and minerals.

In the shed where “The Healing Machine” was installed, geometric paintings on discarded wood were positioned on the ground to point up at the chandeliers. To illuminate the space, electricity from the adjacent power lines was brought into the shed and connected to a web of Christmas tree lights and lights in coffee cans on the dirt floor, which he thought offered a more direct connection to the Earth. When you stepped into the darkness of “The Healing Machine” and the lights were turned on, you experienced this immersive installation of delicate contraptions and richly colored paintings with only the sound of crickets out in the night.

Blagdon considered himself more sensitive to the Earth’s electricity than other people, so he saw it as his role to explore how to connect to this energy. In a way, it wasn’t much different from the windmills turning on the plains outside his Nebraska shed, with one form of the Earth’s energy being harnessed by another type of machine. 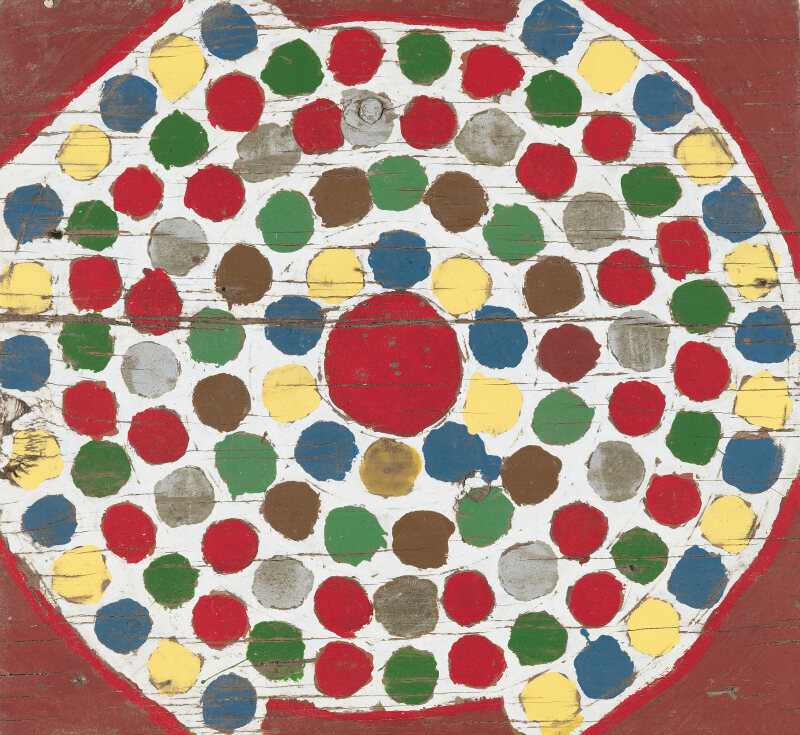 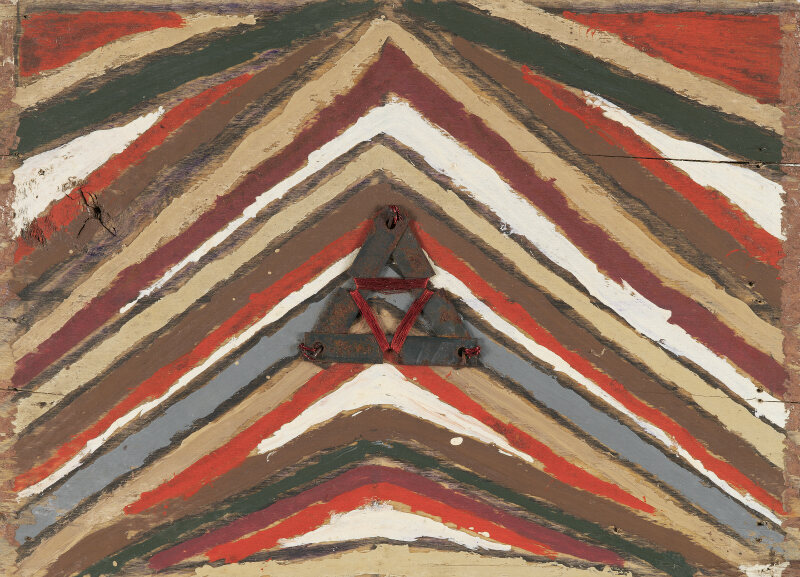 The exhibition at the Kohler Arts Center features a reconstruction of a cross-section of the “Machine” for visitors to exprience it as close as possible to how it was in its original state. The installation came to be at the Kohler Arts Center when Leslie Umberger, the former senior curator, became aware of “The Healing Machine” and connected to Dan Dryden and Don Christensen who had bought the art at auction. Dryden had first experienced “The Healing Machine” when he was working as a pharmacist in Callaway.

“One day Emery Blagdon went into the pharmacy and asked for some healing salts, and although Dan didn’t know what he meant by that, he was intrigued enough to ask him questions,” Patterson said. “In the end, he gave him mineral salts and just wanted to see what Emery was building with these ‘healing machines.’ So a couple days later, Dan was invited up to the ‘Healing Machine.’ If you can imagine this building that tapped into the electricity of the farmland, the lights were off, and when Emery turned them on, because it was live electricity and mobile structures  Dan felt like there was movement. All the different colors and movement was a life changing moment for Dan, who was inspired to move to New York to work with music, his lifelong passion.”

Years later Dryden went back to Nebraska with his music partner Don Christensen, only to find that Emery had passed away and the property was up for sale. Dryden and Christensen bought the whole thing, and made a rudimentary map of where everything was so that it could be created, saving each board, light bulb, chandelier, and tin can.

The Kohler Arts Center is focused on “venacular environment buildiers,” as Umberger described them, and as such is passionate about acquiring “environments” that, for whatever reason, are unable to be preserved “in situ.”

“Even if we can’t recreate perfectly the shed, the fact that it is exhibited in a shed in the gallery is one of the most improtant parts of it,” Patterson said. “In addition to being beautiful and provoocative and kind of mind blowing, it is an environment.”

The Kohler Arts Center hopes to tour “The Healing Machine” after it completes its exhibition at the art museum on January 12, 2014. Blagdon worked on “The Healing Machine” until his death in 1986 from cancer, a disease for which the solitary artist had only sought treatment and comfort with his elegant machine.