The 'Itchless' Innovation that Made Minneapolis the Capital of Underwear - Atlas Obscura
Want to see fewer ads? Become a Member. 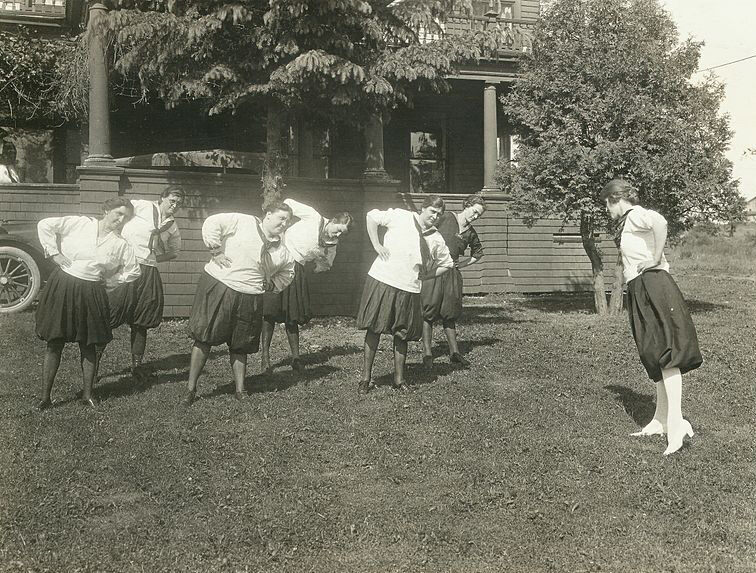 Reginalds, smalls, intimates, grundies—underwear has gone by many names and played many different roles in its rich and tumultuous history.

From the Neolithic leather loincloth to the laciest La Perla lingerie, underwear has for millennia served a bevy of hygienic, religious, sexual and thermal purposes. Yet while underwear was designed to cover and protect a person’s genitals, bottom or breasts, a strange process of sympathetic magic saw it become as titillating and taboo as the very bodily areas it sought to conceal. Indeed, by the Victorian era underwear had become the item of clothing that dared not speak its name, being identified simply as “unmentionables” or “inexpressibles.” Creating such powerful totems obviously requires skill, tact, and a superb understanding of the gurgling passions of the human id.

Fortunately such facilities can be found in spades in Minneapolis, the underwear capital of the world.

The story of how this thrusting Midwestern city came to achieve this legendary status is a tale of liberation, and extremely peculiar names. It begins with Egbert Egberts, whose 1832 invention of a powered knitting machine to make socks in Cohoes, New York, suddenly brought mass-produced underwear to the reach of the general populace. The story is next taken up by Amelia Jenks Bloomer, a temperance campaigner and leading light in the Victorian rational dress movement which sought to rid women of the panoply of torture devices that were then known as lady’s undergarments such as tight bodices, whale-bone corsets and bustles.

By the 1850s Bloomer had leant her name to an alternative form of dress, a shortened skirt and trousers known as “the Bloomer” and as part of this healthful fashion movement in 1868 a woman’s union suit—an all in one body stocking which was patented as the “emancipation union under flannel”—was created and praised by health reformers such as the German zoologist, Gustav Jaeger and corn flake magnate John Harvey Kellogg.

Yet there were two major problems preventing underwear being overhauled. One was the fact that many of the clothing reformers (especially Jaeger) were almost unhinged in their belief that underwear had to be made of wool, since “only animal fibers prevented the retention of the ‘noxious exhalations’ of the body, retained the salutary emanations of the body which induce a sense of vigor and sound health and ensured warmth and ventilation.” Unfortunately wool is itchy—and having it rubbing against a body’s most delicate areas tested even the hardiest of health advocates.

Yet an even bigger stumbling block was less practical than cultural: in the late Victorian period, it was considered extremely impolite to discuss underwear in public. Such was the anxiety that underwear produced that in the 1890s men and women’s underwear were not hung on the same clothesline for fear of some sort of inanimate impropriety taking place. This left underwear manufacturers in a fix. How were they to advertise their wares if everybody ran blushing as soon as it was mentioned? It was at this crucial juncture that Minneapolis enters our story.

In 1886 an underwear entrepreneur named George Munsing moved from New York to Minnesota. He saw in Minneapolis not only a market ready for exploitation—the cold winter weather necessitated thick underwear—but also a strongly liberal climate, partly due to the large influx of Scandinavians to the area. Here, he thought, underwear could finally be brought out into the open.

A trade card for Munsingwear, with a paper doll promotion for children, c 1900. (Photo: Public Domain)

Munsing founded the Northwestern Knitting Company (later the Munsingwear Corporation) and immediately dealt with underwear’s prickly wool problem. By mixing silk and wool together he created men and women’s underwear that was not only warm but didn’t irritate the skin. This “itchless” underwear was a major breakthrough in both comfort and decorum, but still there was the problem of selling it to a coy world.

At the time other underwear manufactures advertised their product using photos of their garments lying flat, without so much as a crease that could be mistaken for a forbidden demesne or uncouth tumescence. Occasionally clothed women would be photographed holding up the underwear beside them. But in 1897 Munsing broke with tradition and ran an advertisement in the Ladies Home Journal that showed a photograph of a smiling young girl clad only in a union suit. It was daring, it was provocative, but the use of living models was decisive. As the doyenne of drawers, Susan Marks, wrote in her study of the industry, Munsingwear fought the taboo head on. “Don’t Say Underwear” crowed the ads, “Say Munsingwear!”, thus brilliantly playing off the social anxiety that the term underwear still provoked while offering the company’s own name as a euphemistic alternative.

Munsing showed families lounging at home in their underwear, or young women in union suits tastefully positioned between vases of flowers. Men stood only in their union suits contemplating their newspapers or involved in sporting activities to demonstrate their healthful aspects. Slogans steered clear of advertising hyperbole— “Sensible, Serviceable, Satisfactory” read one advertisement. The idea was to destigmatize underwear. It worked. By 1900 Munsingwear offered 60 different union suits for women alone. By 1917 Munsingwear was making 30,000 undergarments a day, and by 1923 the Munsingwear Corporation went public and became the largest manufacturer in the world with an ever increasing array of undies.

But already cracks were showing in the underwear giant. Improvements in household heating caused the market for woolen union suits to plummet. Chemises and camisoles were on the rise. Other towns were challenging Minneapolis’ predominance, most notably the town of Piqua, Ohio, home to the Atlas Underwear Company founded by Leo Flesh and creator of the first commercially practical drop-seat union suit, a major innovation in both underwear and slapstick comedy. By the 1980s Piqua had even established a two-day “Great Outdoor Underwear Festival” complete with a parade extolling the virtues of underwear.

Minneapolis couldn’t compete and by the 1980s, its run as Underwear Capital of the World was over. New territories in South America such as Nova Friburgo in Brazil and Gurao in China—the self-declared World Capital of Sexy—had stolen its mantle by making hundreds of thousands of boxers and briefs and bras each day. For Minneapolis there are only memories, although it is perhaps no coincidence that the city’s most famous resident, the musician Prince, has brought underwear couture to a whole new level.

It's all about innovation in sheep-shearing.
food

The California Town That Produced 10 Million Eggs a Year

And then went on to become the Arm Wrestling Capital of the World.
other capitals of the world

The Invention that Tamed America, and the Town Obsessed with It

Western agriculture is hard to imagine without barbed wire.
other capitals of the world

This Iowa Town's Dirt Might Be More Valuable than Gold

Conrad, Iowa is the black dirt capital of the world.
Want to see fewer ads? Become a Member.
From Around the Web
THE GASTRO OBSCURA BOOK
Taste the World!
An eye-opening journey through the history, culture, and places of the culinary world. Order Now