Brought to You By the Manufacturers of Fiberglass Dinosaurs: The Tallest Pope Statue in the World - Atlas Obscura
Want to see fewer ads? Become a Member.
In This Story
Place

Brought to you by the makers of fiberglass dinosaurs. 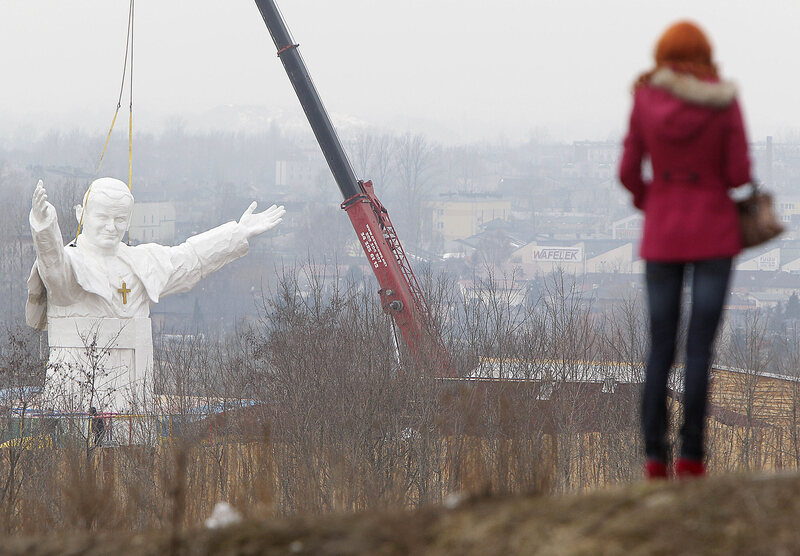 Throughout history, religious monuments of extraordinary size have been erected by devoted followers for centuries. Even as technology and society shifts, monuments dedicated to religious figures are still raised from time to time. Poland, which already boasts the world’s tallest statue of Jesus Christ, has erected another gigantic statue, this time the religious figure in question is Pope John Paul II.

Facing the city of Czestochowa, the statue was unveiled this week. It was commissioned by businessman named Leszek Lyson, who funded the statue as a humble thanks to the late Pope, who passed away in 2005, for allegedly intervening in spirit when Lyson saved his son from drowning three years ago.

As a product of the modern day, the 13.8 meter tall statue wasn’t built with marble or other stone, but with fiberglass. The company behind the statue is responsible for building dinosaur statues for theme parks across Europe. While this particular statue might not seem as terrifying as, say, a Tyrannosaurus rex, the giant holy man’s gaze upon the city of Czestochowa must be a little disconcerting.

The statue has drawn ire and criticism from all sides. Roman Catholics say that the gaudy statue is against all that the pope stood for, while more secular critics compare the giant white statue to the Stay Puft Marshmallow Man from Ghostbusters. The Czestochowa’s architects’ association, who didn’t seem to have any spiritual stake in their criticisms, say that the fiberglass statue lacks quality. 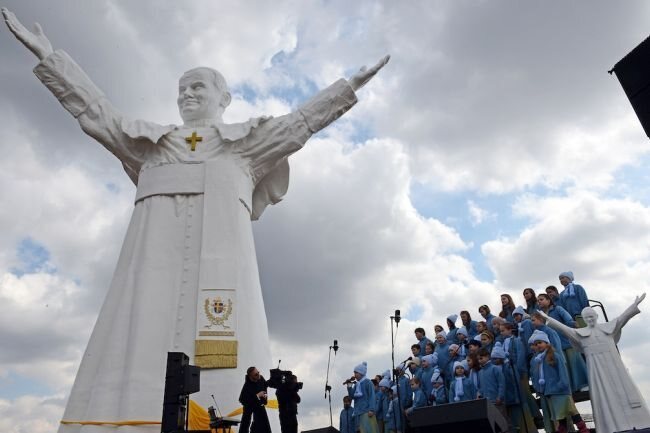 The statue in Czestochowa isn’t the first controversial statue of this particular pope. Rome boasts a bronze statue of Pope John Paul II, that also drew disdain by some who said that the statue is ugly, and doesn’t give their beloved pope’s holy visage justice.

Strange intentions and disagreements aside, the statue in Czestochowa remains a sign of Pope John II’s legacy. Pope John Paul II was the first Polish pope after 450 years of Italian popes. He would go on to be one of the most recognized popes in history, visiting over 120 countries worldwide, and he is credited with beginning the solidarity movement that would end communism in Poland in 1989.