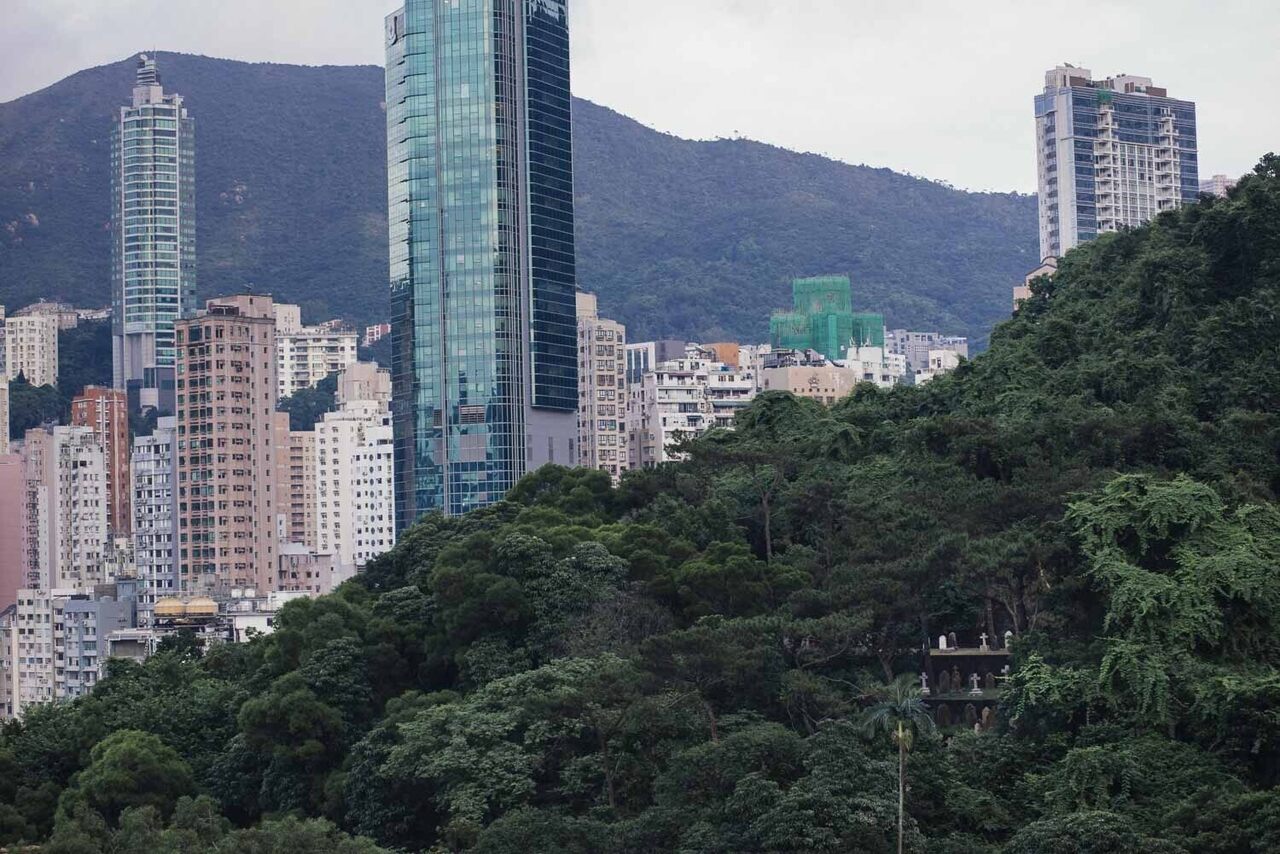 The cemeteries of Happy Valley rise in tiers up the valley slopes -- their verticality mirroring the high-rise apartments that surround them. All Photos: Mike Sakas

The cemetery climbs ten stories up the valley wall, moss-covered gravestones lining each stair-like terrace. Plants press in, shading tombs with wide palm leaves as roots burst up through sarcophagi. Mosquitos drone. Cobras flee approaching footsteps. These are the cemeteries of Hong Kong’s Happy Valley, a historic burial district shaped by terrain, disease, history and culture. These colonial cemeteries offer a window into the city’s past and a reminder that—in the densest city on earth—even death isn’t an escape from living small.

When British forces landed at Hong Kong in 1841, Happy Valley gained a reputation as a fever swamp. The rice paddies and poor drainage proved an ideal breeding ground for mosquitos, and any force posted there quickly succumbed to malaria, cholera, and typhoid. Eventually the British developed a novel solution—they would headquarter elsewhere, but bury their dead in the poisoned atmosphere of Happy Valley.

And there was no shortage of dead in those days. Between disease, pirates, maritime accidents, and casualties from Britain’s Asian wars, 19th century Hong Kong churned through westerners. Most colonial policemen didn’t live past 31, and it wasn’t unusual for missionaries to go through three wives.

The high mortality rate and international nature of the Empire created a quilt of imperial dead—the Protestant Hong Kong Cemetery lies directly alongside Catholic St. Michael’s, and the Empire’s Indian troops had their own Hindu, Muslim, and Parsee burial grounds. Meanwhile the local Chinese, who considered graveyards spiritually polluting and inauspicious, moved out of the area. It remains an expat enclave to this day.

In 1844, the British solved the malaria problem in the most English manner possible: they drained Happy Valley to build a horseracing track. The racecourse united foreign colonials and oppressed locals in their shared love of wagering, but also placed the city’s primary gambling venue amid the unluckiest feng shui on the island. The superstitious might claim this bad omen finally caught up with the city in 1918, when a bamboo grandstand collapsed and caught fire, killing 590 people.

By World War I, the lower slopes of Happy Valley were full, and the cemeteries had nowhere to go but up. Hong Kong authorities built new terraces into the mountainside, seeding them with bodies as the decades and conflicts rolled by.

As a result, the funeral monuments reflect a cross-section of those who shaped Hong Kong. In the low-lying areas of the Protestant section, where the graves are older, you’ll find ship captains buried under anchors and obelisks dedicated to the crews of navy vessels or opium clippers. Several notable figures reside here, like Henrietta Hall Shuck, the first female American missionary in China, and Sir Kai Ho Kai, the first Chinese Hongkonger to gain a knighthood.

Perhaps the most tragic monument is a blank pillar marking the grave of revolutionary martyr Yeung Ku-wan. Yeung used Hong Kong as a safe haven to organize pro-democracy revolts against the Qing dynasty in 1895 and 1900, but that protection proved illusory. In 1901, Yeung was teaching an English class on the second floor of his home when a Qing assassin put a bullet through his head. Yeung’s monument was left blank so imperial agents wouldn’t desecrate his grave.

Move up the terraces and the Victorian urns give way to the uniform white graves of World War I soldiers killed in the siege of German Qingdao, and those who fell during the 1941 Japanese invasion. This sparse military style contrasts with the intricate statuary of the Catholic cemetery next door, where monuments include heroic busts, angels and figures kneeling in prayer.

But the most stylistically interesting graves are those that blend western and Chinese imagery. More than a few local tombstones have incense burners, so Chinese Christians can make offerings to their departed family members. One striking monument includes a traditional Chinese name tablet—believed to house part of the soul after death—set into the upright axis of a cross. This melding of Christian iconography and Chinese folk religion is quintessentially Hong Kong, a city where even death is a cross-cultural experience.

But population density is increasingly rendering these luxurious graves impractical. Put simply, the city’s running out of burial space. As far back as the 1960s, the squeeze prompted the government to champion cremation over traditional earth burials, leading to a boom in P.O. box-like mausoleums where ash jars sit in covered niches. But those too are full.

In a mirror of the housing market, private niches now go for as much as $100,000, while the wait time for a public spot exceeds four years. The government has started promoting ash scattering, but it’s not going well. Hongkongers recoil at the thought of dumping relatives off a ship or throwing them in the dirt. So as gravestones themselves increasingly recede into history, the tiered Victorian burials of Happy Valley become an even more striking, and unusual, relic of the city’s past.

The rise and demise of the night of the living dead.
cemeteries

In Brooklyn's Green-Wood Cemetery, Atlas Obscura's "Into the Veil 2017" was a night of sublime contradictions.
31 days of halloween

They're perfectly to scale, and all based on real cases.
airports

Turn right at the mountain.
Video

These resting places celebrate life.
Read more
Thanks for sharing!