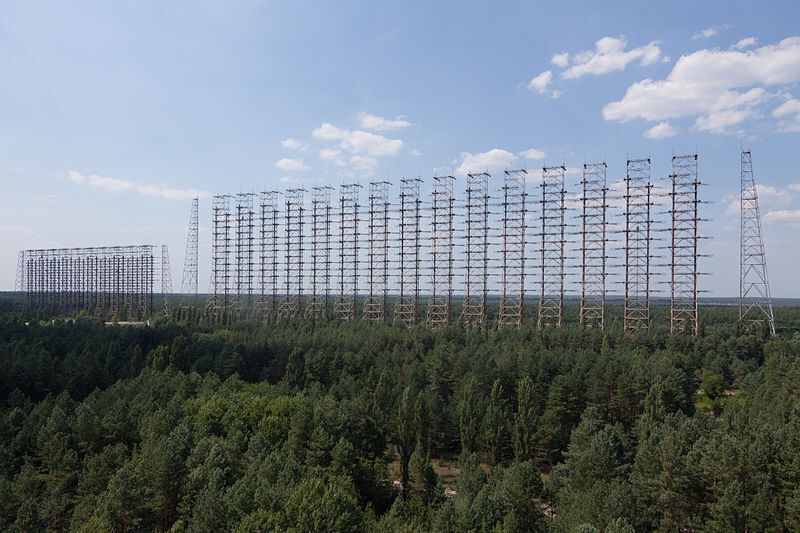 Radar antennas at Chernobyl. Ingmar Runge/CC BY 3.0
In This Story
Place

This derelict superstructure was a very important warning system for the Soviet military.

This April 26 marks the 30th anniversary of one of mankind’s most catastrophic events: the explosion at Chernobyl’s reactor number four.

Recent years have seen Ukrainian authorities allowing intrepid visitors into the Exclusion Zone to see the haunting side effects of the disaster. But while the abandoned town of Pripyat, with its iconic ferris wheel, receives the most attention, there is an even more mysterious site hidden in the irradiated forest.

The site was shrouded in such secrecy during the height of the Cold War that on official maps, it was marked as a children’s summer camp. Like the rest of what would become the Exclusion Zone, it had to be abandoned suddenly in 1986. While it once was at the forefront of Soviet military and scientific technology, classified as top secret, today it rests, mostly forgotten and silent in the woods surrounding Chernobyl.

Venturing deep into the forests of the Exclusion Zone for Atlas Obscura, I went to explore the derelict and awe-inspiring military base known as Chernobyl-2 and the unusual structure known as Duga-1.*

In 1976 amateur shortwave radio enthusiasts began hearing an unusual and highly powerful signal. Ham radio fans all over the world soon had their listening disrupted by an unrelenting tapping sound. When source of the mysterious new transmission was triangulated, it appeared to be coming from somewhere deep behind the Iron Curtain. The peculiar signal was given the nickname “Russian Woodpecker.”

Throughout Europe, public radio broadcasts began to suffer from interference. My Chernobyl guide recalls that higher-end Soviet television sets were sold with a special “woodpecker jamming” device built in. More alarmingly, the mysterious signal began to interfere with emergency frequencies for aircraft.

The purpose of the Russian Woodpecker remained a mystery. Conspiracy theories ranged from Soviet mind control to weather experiments. Then came the collapse of the Soviet Union, which revealed that the Russian Woodpecker was at the forefront of what is known as “over the horizon” radar, designed to provide early warning of an inter continental ballistic missile attack. The Duga-1 (Eastern) radar broadcasting the Woodpecker signal was located in the forests surrounding Chernobyl.

The ‘over the horizon radar’ was designed to listen for incoming U.S. missile attacks. (Photo: Luke Spencer)

While the nuclear reactors and the abandoned ghost town of Pripyat receive the most attention from photographers and urban explorers, there is far more to the Exclusion Zone that remains secluded. According to my guide, the Exclusion Zone was once home to over 90 villages. With a night time curfew still in place, most of the officially sanctioned guided tours into the Zone remain day trips.

To reach the Duga radar base requires a much longer stay. Fortunately and quite surprisingly, there is still a working hotel inside Chernobyl. The staff at the Chernobyl Hotel work on a strict rotation of 15 days inside the Zone and 15 out, to maintain relatively safe levels of radiation exposure. There are several thousand workers still active in the Zone, occupied with either patrolling the checkpoints or working on a new giant sarcophagus, which one will one day cover the still precarious reactor number four.

Duga-1, like the rest of what would become the Exclusion Zone, had to be abandoned after disaster struck reactor number four. (Photo: Luke Spencer)

Driving in the opposite direction from Pripyat, there is a small turn off the main road back to the checkpoints and Kiev. This solitary track winds deep into the deserted woods. According to my guide, the Duga-1 radar base was never officially recognized; the summer camp it was disguised as on maps was supposed to be for the Pioneer youth movement.

Several miles into the abandoned forest, there is a sagging security fence with rusted Soviet stars on it. During the Cold War, even approaching this spot would have had dire consequences, but today there is just one guard, near a dilapidated guard house with wood smoke rising from the chimney.

The radar base was shrouded in the highest levels of security but today remains abandoned. (Photo: Luke Spencer)

Inside the perimeter fence are the remains of the radar base. Rusted vehicles lie abandoned in the tall grass. Buildings decorated with once vibrant murals of Soviet propaganda depicting soldiers and jet fighters are gradually crumbling.

When Duga-1 was fully operational, over 1,500 military personnel, scientists and technicians lived and worked here, says my guide. There were apartments, and even a kindergarten, all of which are deserted, like the wooden sentry boxes watching over them.

Soaring high over the pines and firs in a forest clearing is the Duga structure. It looks as if someone had taken a 20-mile stretch of electricity pylons and squashed them into a line the length of a football field. A swirling mass of wires, pylons and cylindrical cones form a geometric structure of steel roughly 150 meters high.

While the U.S. invested heavily in the NIKE missile and radar system for protection from Soviet missiles, the Soviets built the complex Duga radar to watch for U.S. missiles. Underneath the now-silent pylons is the network of buildings that once housed the forefront of 1970s Soviet computer technology. Today, masses of computer terminals, radios, wires and displays written in Cyrillic lie among the snow and the weeds.

Once the height of Soviet technology, much of Duga-1 has been left to rust. (Photo: Luke Spencer)

The inside of the control building is pitch black. Torchlight reveals banks of rusted switches and eerie rooms of electronics that lead off a central walkway. One room resembles a small auditorium, with rows of computer terminals facing a large wall. The floor is covered with broken glass. It turns out this was the control room for the radar base.

Although no photographs exist of the control room when it was fully operational, it is thought that the glass covered the far wall and functioned as some form of map display similar to Houston’s Mission Control Center.

Further along from the mission control room is the old canteen. The walls are decorated with futuristic science-fiction murals: a model space station city on some future planet; satellites; and cheerful cosmonauts, depicting a utopian communist future.

The canteen at Duga-1 was decorated with futuristic murals of the Soviet space program. (Photo: Luke Spencer)

Up a crumbling staircase is a room decorated with pictures of Soviet fighter jets, model soldiers, Lenin, and a wall of anti-American iconography. In one mural, U.S. Marines terrorize a Russian woman and her child. A businessman, complete with Stetson hat, is a shadowy menacing figure, wearing a giant gold signet ring on his fist, stamped and engraved “US.”

The fateful day of April 26, 1986 suddenly brought the veil down on the radar station. Like the rest of what would become the Exclusion Zone, Duga-1 was eventually evacuated, and left to decay in the forest. By 1989, alert ham radio enthusiasts noticed that the curious tapping signal, the Russian Woodpecker, had suddenly stopped.

Walking today amid the silent pylons, and seeing remnants of the pinnacle of Soviet computer technology lying rusted on the ground, one is struck by the vast amounts of money, expertise and energy spent on designing, constructing and working the radar system. The exact date the Duga project was abandoned is, like most of the Exclusion Zone, somewhat of a mystery, but it seems that the base wasn’t vacated immediately after the fateful explosion. Within a few years, the peculiar Russian Woodpecker, so long vexing to shortwave radio enthusiasts, and cause for concern for Western intelligence, disappeared from the airwaves, never to be heard again.

* Correction: This story original referred to the station as Duga-3. It is actually Duga-1.

Where Mass Tourism Overrides Memorialization, Chernobyl Is Far from a Time Capsule

Few of them seem to miss the missing humans.
radioactive

Six years after the disaster, Tepco may have found its lost nuclear debris.
radioactive

5:25
Want to see fewer ads? Become a Member.
From Around the Web
Related

The local grain tested positive for radioactivity.
Read more
Thanks for sharing!