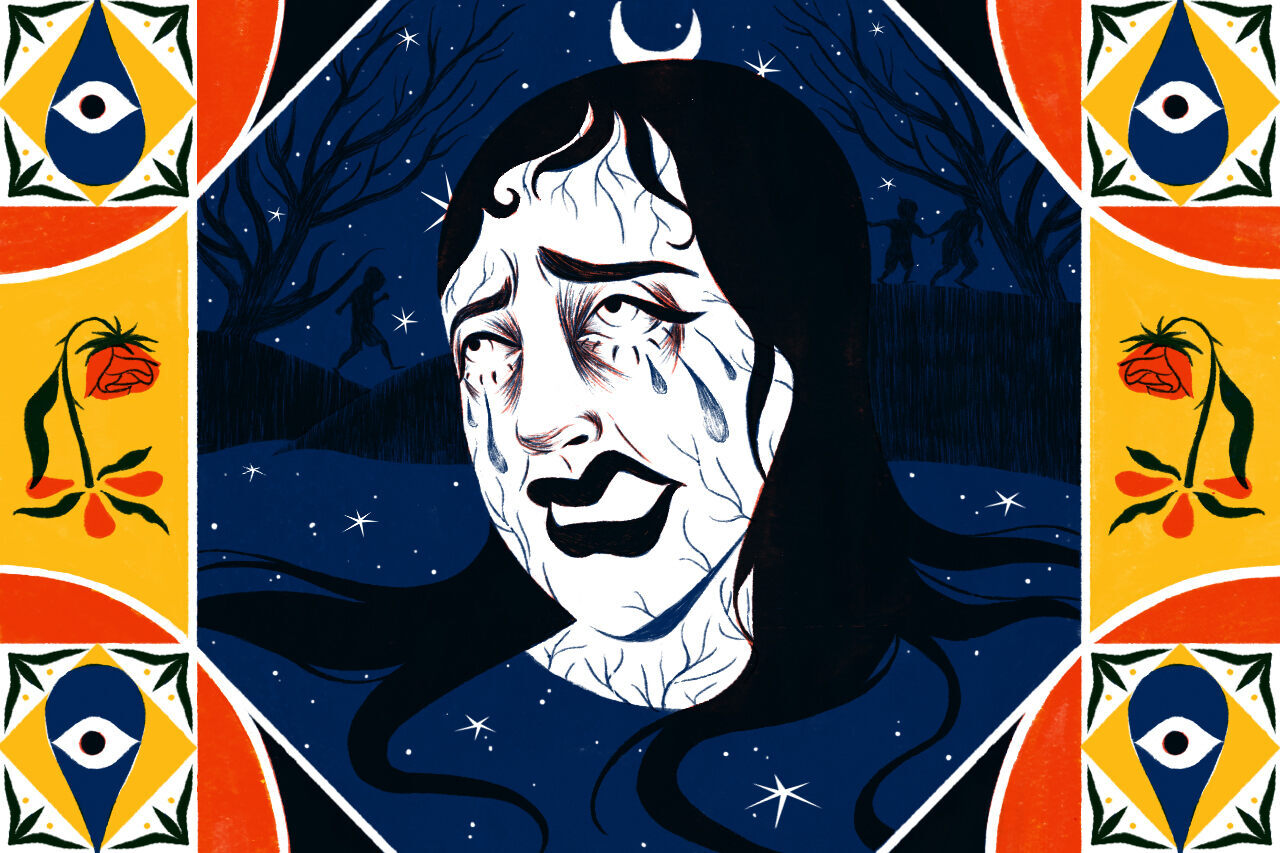 During the making of the 2019 horror movie The Curse of La Llorona, some of the cast and crew were convinced that the spirit of La Llorona—Spanish for The Weeping Woman—lurked about. They were spooked by inexplicable cold chills and exploding jewelry on set, unexplained flickering lights and screaming dreams.

“We did have some creepy supernatural occurrences,” the director, Michael Chaves, told the Los Angeles Times. “Half the crew actually does believe the house that we shot in was haunted, and there might have been something to that.” Actress Patricia Velasquez added, “I think she was there just making sure we were doing right by her.”

In the film, the titular character is the ghost of a mother from 17th-century Mexico who drowned her sons and now haunts the living with her inconsolable crying. Dressed in white, she spends her days looking for other children to steal.

Off the screen, La Llorona is a well-known and pervasive legend who serves as a cautionary tale for multiple generations in Latinx households, often invoked to scare kids and stop them from misbehaving. Known throughout Central and South America but most often associated with Mexico, her story varies according to who tells it.

In some versions, she’s an indigenous woman who’s so enraged by her husband’s infidelity that she vengefully murders their children in a nearby river, then drowns herself in grief and remorse. In other versions, she blames her offspring for her lover’s desertion and throws them to their death in the river.

Regardless of which version is told, each tale results in her being doomed to wander the earth, always near water, wailing for her little ones (and thus earning her sad name). What earns her a scary reputation, is that La Llorona doesn’t just kidnap youngsters. She also brings woe and death to those who hear her cries or get in her way.

“The versions of the story we see today—including movies (The Curse of La Llorona, Mama, and La Leyenda de La Llorona) and television shows (the series Grimm)—all emphasize the spooky or frightening aspects of the story,” says Domino Renee Perez, author of the book There Was a Woman: La Llorona from Folklore to Popular Culture and associate chair of the English department at the University of Texas at Austin. “That this wandering woman who weeps will get you if you don’t watch out.”

Other, more complex versions of the grieving woman exist. She’s sometimes associated with Doña Marina, or La Malinche—the Nahua woman from the Mexican Gulf Coast who served as an interpreter, adviser, and mistress to Spanish conquistador Hernán Cortés, bore his child, and was then deserted by him (to compound her misery, she’s sometimes portrayed as a traitor for siding with the Spanish).

Other times, the mourning lady is thought of as an Aztec goddess whose weeping was an omen that predicted the Spanish arrival and ensuing slaughter of indigenous groups—an aggrieved deity who continues to weep to this day.

In Xochimilco, a section of Mexico City that’s called the Venice of Mexico, during an open-air theatrical spectacle that bears her name, La Llorona is portrayed as a woman warrior who kills herself and her baby to avoid leaving her land and people, swearing vengeance against the Spaniards. The performance—which has taken place each year on the water since 1993, to coincide with the Day of the Dead—was created to promote the history, ancient cultural traditions, and natural beauty of Xochimilco’s water canals, which date back to pre-Hispanic times.

Ultimately, what ties all these different stories together is the thread of overwhelming grief. “It’s a story about loss,” says Perez, “and the many ways that the woman at the center of the story chooses to respond to that loss. It’s also about how a community responds to her actions.”

Though her actions can be interpreted in a variety of ways, La Llorona has recently become more visible outside the Latinx population—not just in the arts and media but in mundane items such as cocktails and towels. Her myth may date back centuries, but her growing popularity today is a sign of the times, says Perez: “I think that as the Mexican-American and Mexican-immigrant populations continue to grow [in the U.S.], more and more of our stories, cultural practices, and customs are finding their way into the mainstream.”

For the Latinx community, The Weeping Woman is such a familiar and subjective subject, says Perez, that she’s malleable enough to be more than just a tool to discipline naughty kids. In fact, she can be—and is fast becoming—a potent and enduring cultural symbol.

“The story also has a timelessness to it,” says Perez, “dating back to pre-conquest portents foretelling, for some, the fall of the Aztec Empire and extending into the present, where thousands of women are being separated from their children at the border. La Llorona remains relevant, and as long as she does, her story will continue to be told.”

Depending on the ghosts, it might fetch a premium.
legendary afterlivesspirits weekaztecghostsculturelegends
Keep Exploring
beer

The Nain Rouge has been stirring up trouble—and maybe generating some goodwill—for more than 300 years.
abandoned

They are haunted, but not by ghosts.
ghosts

Read some of our readers' favorite spooky tales from very close to home.
victorian

To stave off boredom, some people donned sheets and menaced the public.
Video • AO Docs

The digital descendants of 'yōkai' can be spotted in many Japanese games.
Read more
Thanks for sharing!