The Remarkable Photo at the Heart of 'The White Darkness' - Atlas Obscura
Want to see fewer ads? Become a Member. 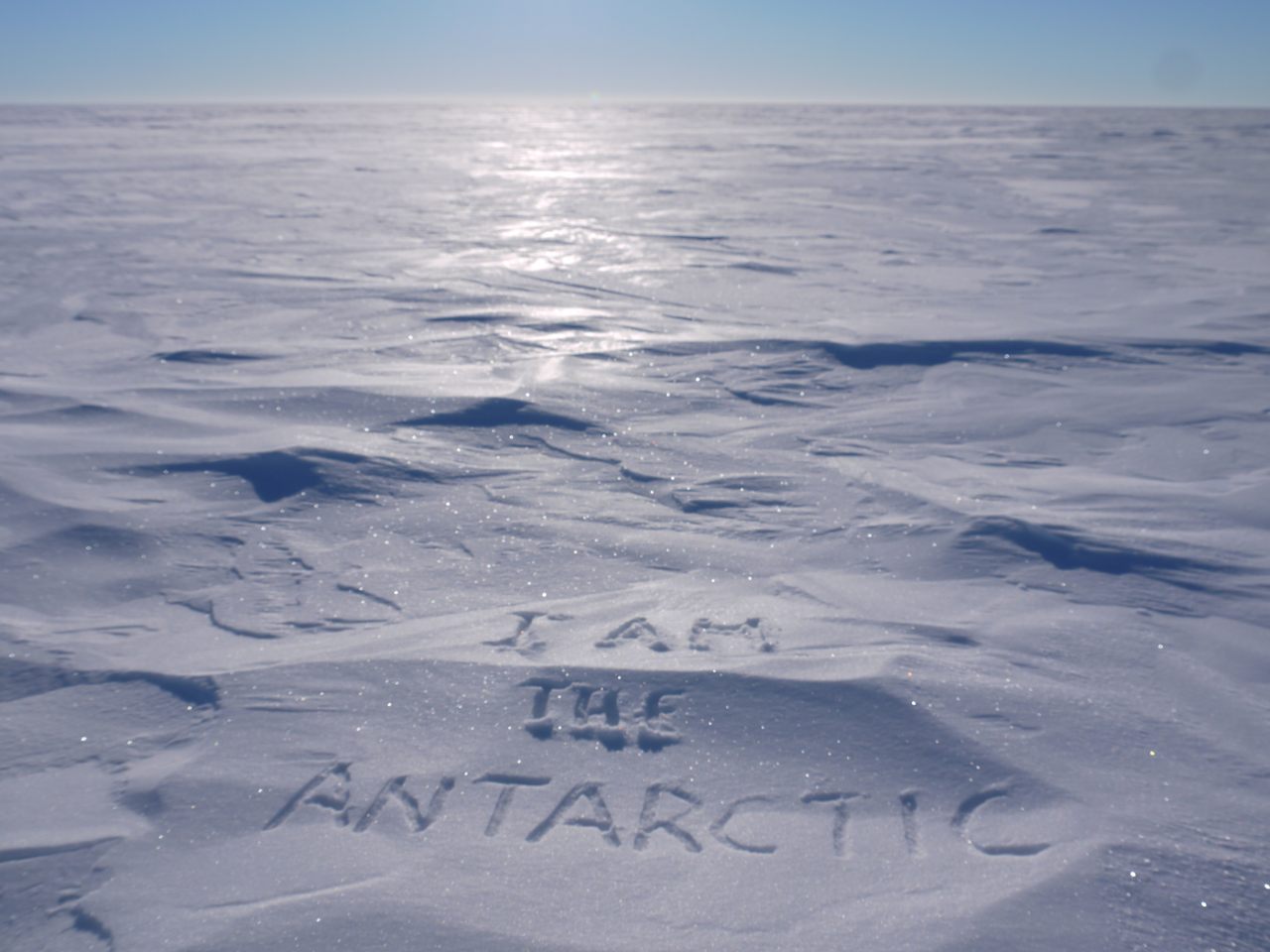 At first, the message seemed to come out of nowhere. Courtesy Lou Rudd
In This Story
Destination Guide

Nothing should have been there but ice—the wind-swept ice of Antarctica, stretching to the edge of the sky. For hours upon hours, days upon days, Lou Rudd, a 42-year-old British Army officer, had stared, through dizzying whiteouts, at the desolation. It was December of 2011, and he was part of a race to the South Pole—a reenactment of the contest, a century earlier, between the Norwegian explorer Roald Amundsen and a British party led by Robert Falcon Scott. Amundsen beat Scott by 33 days, and Scott and his four men all died during their return journey.

Rudd and his companion were following Amundsen’s route, while a rival party was tracing Scott’s. Both journeys were more than 800 miles, traversing a place where temperatures sank to -70 degrees Fahrenheit and winds gusted up to 100 miles per hour. On this day, Rudd was trailing far behind his companion, whom he could not see in the distance. Yet he noticed something carved in the ice sheet. He was accustomed to wind-sculpted formations, which resembled violent waves, but this seemed different—a neatly arranged pattern of etched lines, some straight, others curved. They looked like an archaic drawing. Rudd, physically depleted and bleary-eyed, wondered if he was seeing a mirage. He skied closer, until the markings came into focus: they were distinct letters. He read the gleaming message with wonder. It said, “I AM THE ANTARCTIC.”

The message had been scrawled with a ski pole by his companion, Henry Worsley. A revered British Army officer who had served tours with the Special Air Service, an elite commando unit, Worsley was a polymath and a devoted family man. As I document in my new book about Worsley, The White Darkness, he was also fascinated by the golden age of Antarctic exploration, especially by Ernest Shackleton. During the early 20th century, Shackleton had failed in repeated attempts to reach the South Pole, and in a later effort to trek across Antarctica, but he had guided his parties to safety, demonstrating uncanny powers of endurance and leadership. Worsley felt a special connection to Shackleton: a relative, Frank Worsley, had been a member of Shackleton’s doomed trans-Antarctica crossing. Henry Worsley, while leading soldiers in battle, had emulated Shackleton’s methods, and he had become a leading authority on the explorer. Still, he wanted to get even closer to his hero—to see what he himself was made of. In 2008, at the age of 47, he set out with two other descendants of Shackleton’s crew on an expedition to the South Pole. After reaching Shackleton’s farthest point, on January 9, 2009, Worsley and his men pressed on to the Pole, completing, in the words of one of Worsley’s companions, “unfinished family business.”

Worsley did not expect to go back to Antarctica, but he found himself drawn once more by what Shackleton had described as “little voices” luring him to the unknown. And, nearly three years later, he orchestrated the Scott-Amundsen race to the Pole. His teammate, Rudd, had never been to Antarctica before. “Henry taught me the dark arts of polar exploration,” he says. How to prepare his kit. How to ward off frostbite. How to prevent starvation. Most of all, Worsley instilled him with that peculiar love of Antarctica, a realm of immense beauty that, at any moment, threatened to take your life.

Upon seeing Worsley’s message, Rudd smiled. He knew that his friend felt the spirituality of Antarctica. He also knew that it reflected Worsley’s unassuming style of leadership, like Shackleton’s—a way of playfully offering Rudd something to laugh about in their misery. Rudd got out his camera and, with his trembling hands, snapped a picture. Under Worsley’s guidance, and after a trek of more than two months, the men reached the Pole. They won the race by nine days.

On November 13, 2015, Worsley, hearing again those “little voices,” embarked on his most perilous quest: to trek from one side of Antarctica to the other. It was a journey that Shackleton, a century earlier, had hoped to make before his ship, the Endurance, got trapped in the ice and sank. Worsley, who was by then 55, had added one dramatic modification. He planned to carry out the expedition alone, without any support or assistance—something that had never been attempted before.

Rudd, back in England, carefully followed his friend’s progress. By January 3, Worsley had already crossed the Pole. By mid-January, he was near the finish, history within his grasp. But on January 22, after 71 days of hauling and marching, his body was near collapse. He wrestled with what to do. Recalling how Shackleton had reckoned with his own human limitations, Worsley decided to summon a rescue plane. He was flown to a hospital in Chile, where doctors determined that he was suffering from an infection of the tissue that lines the inner wall of the abdomen. He was rushed into surgery, but the infection spread into his bloodstream. And, to Rudd’s shock, Worsley died of complete organ failure.

Afterward, Rudd reexamined the photograph he had taken that day during his trek with Worsley. It seemed to embody the spirit of his friend, and Rudd, who is now planning his own solo crossing of the continent, read the words aloud to himself: “I AM THE ANTARCTIC.”

The Soviet Children's Books That Broke the Rules of Propaganda

How folk tales and traditional life snuck into avant-garde kids' books in the 1930s.
explorersiceexploration

A vitamin deficiency may have changed the course of a continent's history.
forests

Hidden on the frozen continent are clues to its greener past.
exploration

2:26
Want to see fewer ads? Become a Member.
From Around the Web
Thanks for sharing!