Seeing Through a Glass Clearly: The Evolution of the Microscope at the Grolier Club - Atlas Obscura

The oldest bibliophilia club in America, with exhibitions on historic books and graphic arts. 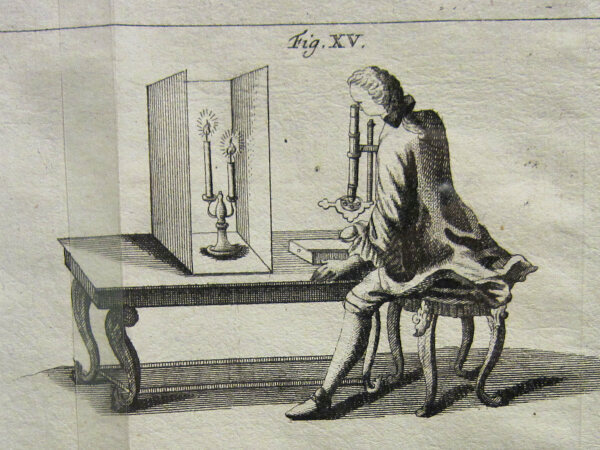 With the advent of the microscope in the 17th century, one of the greatest points of controversy became Aristotle’s belief in spontaneous generation—that life could suddenly appear out of nowhere. As the 4th century BCE Greek philosopher asserted in his book The History of the Animals: “some spring from parent animals according to their kind, whilst others grow spontaneously and not from kindred stock; and of these instances of spontaneous generation some come from putrefying earth or vegetable matter, as is the case with a number of insects, while others are spontaneously generated in the inside of animals out of the secretions of their several organs.” 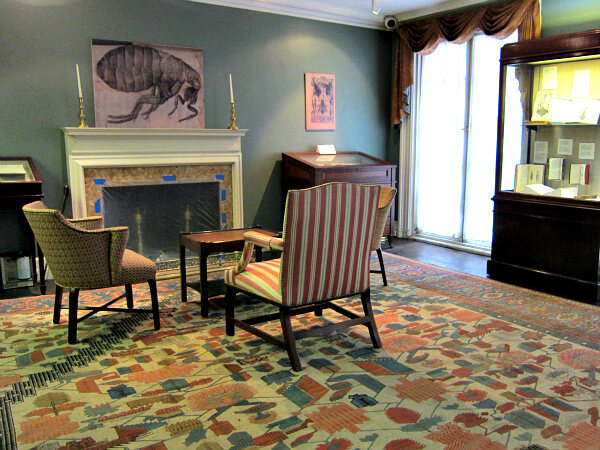 Of course, while Aristotle was totally right about a lot of philosophical and scientific things, this wasn’t one of them. But it took a while for scientists in recent centuries to come to a consensus, and took many hours of eyes craned to the lenses of microscopes, spying on maggots and fleas to decipher the tiny intricacies of their lives. The Grolier Club, the bibliophilia organization established in New York in the 19th century, is exploring these revelations and other developments of the microscope in Through a Glass Clearly: The History & Science of the Microscope, showing through March 15, 2013. 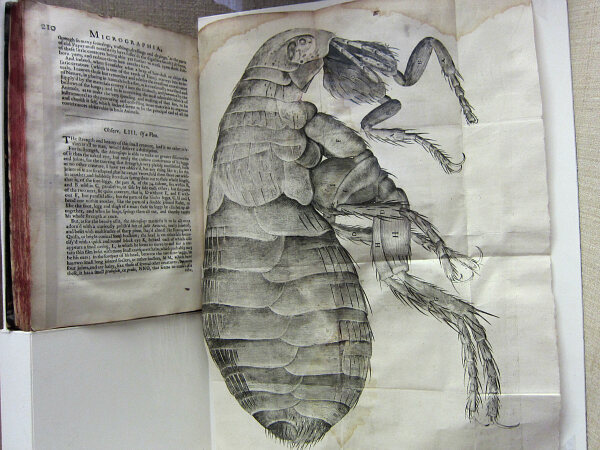 The exhibition traces the evolution of the microscope, from its origins as a novelty to its groundbreaking role in science, through the book collection of Howard Schwartz. Schwartz has been amassing books on microscopes since the 1980s, and stated in the exhibition text: “I started collecting printed works in a very small way as an offshoot of collecting actual microscopes. But book collecting soon surpassed my interest in actual microscopes, if for no other reason than that it’s a lot easier to put books on a shelf than to find room for large, ungainly, brass microscopes!” 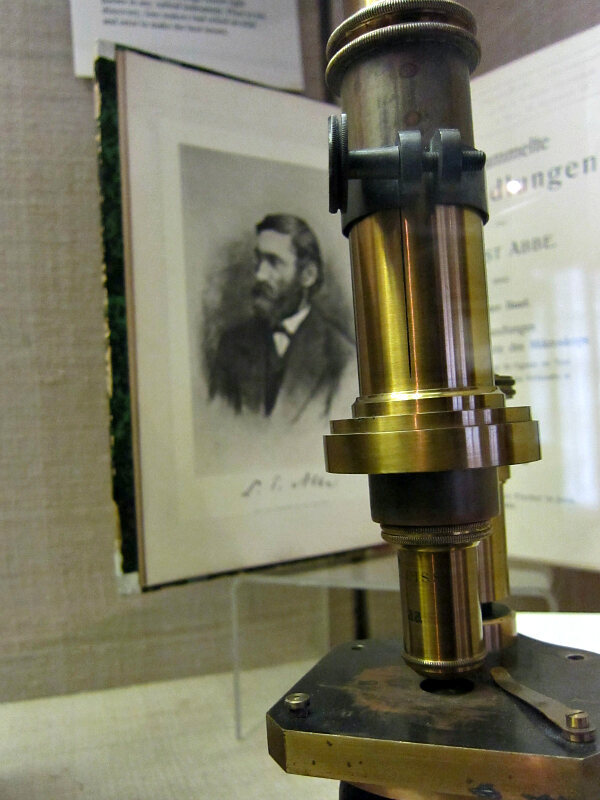 Microscope in “Through a Glass Clearly” at the Grolier Club

The books are fascinating, going back to the 17th century through the early 20th with illustrations showing the earliest views through microscopes: bacteria in wound infections in a 19th century volume by Robert Koch, photographs of snowflakes in the 20th century Snow Crystals by W. A. Bentley, and the flayed fragments of a fly in Friedrich Wilhelm von Gleichen-Russworm’s 18th century Historie de la mouche commune de nos appartemens. Each volume is open to one tantalizing page. 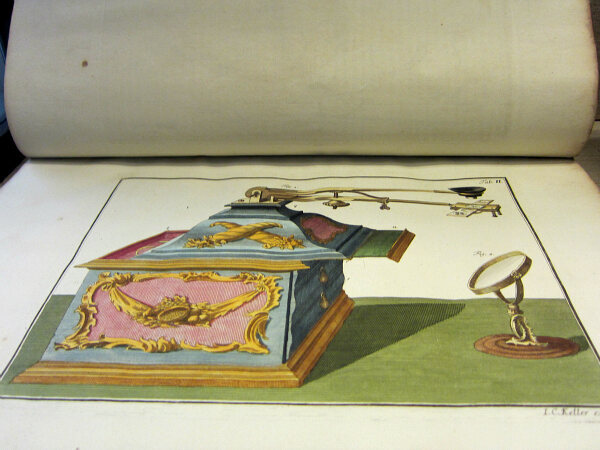 There are also plenty of richly colored or intricately etched illustrations of early microscopes, which started more as variations of camera obscuras, basically projecting an image of something small through a magnifying glass. Solar microscopes, as they were called, were sort of magic lanterns, used in a darkroom with the light of the sun outside directed in with a movable mirror, where it illuminated a specimen between plates of glass. Eventually, with the help of eyeglass makers and astronomers who became interested in the barely visible world at their fingertips rather than the distant intangibilities of space, more modern microscopes developed that no longer needed darkrooms. Instead, they were closer to telescopes, pointing downward instead of up and using a system of lenses. They were still a long way from the 20th century of electron microscopes that could magnify up to 10,000,000 times, but more and more of the invisible world was suddenly revealed. 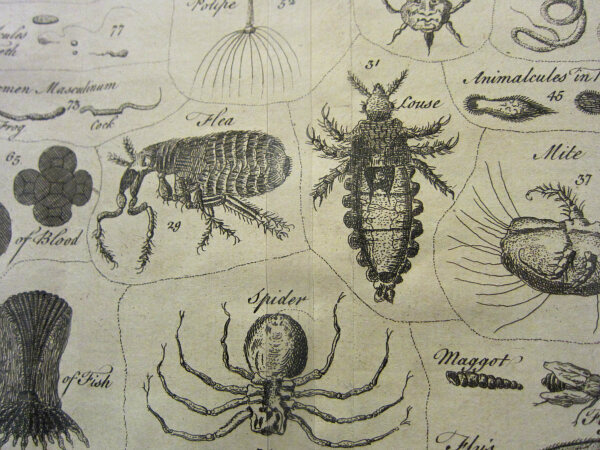 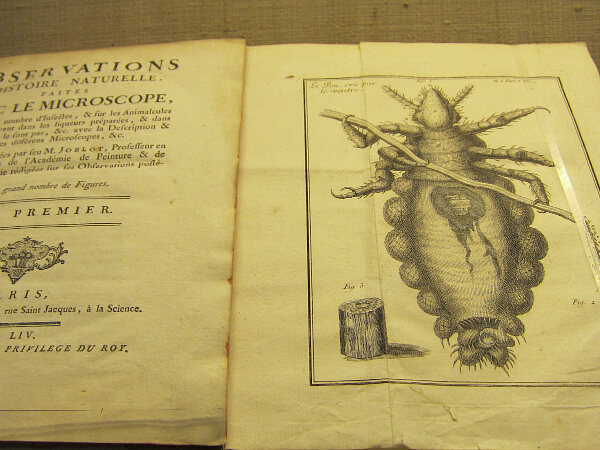 These advances also helped settle the aforementioned spontaneous generation debate. In the 17th century, Francesco Redi published his evidence disproving that maggots suddenly appeared on decaying flesh, and instead were born there, although John Turberville Needham in the mid-18th century refuted that God wouldn’t possibly allow chance to play a role in reproduction, and that embryos must be predetermined. However, as microscopes got more advanced, eventually even such stern proponents had to admit that the “spontaneous” appearance of life was more due to it being out of view of the naked eye, and a whole miniature world was living and dying all around us, all the time. 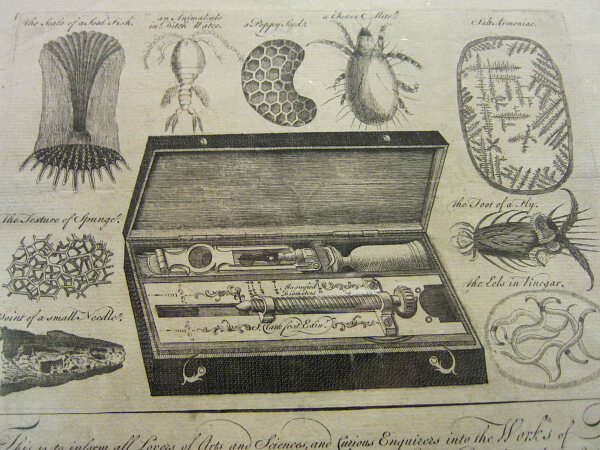 A small, but enjoyable, aspect of the exhibition is the brief focus on microscope advertisements to the public, so that anyone could study the natural world in their own home. Francis West’s advertisement for his portable microscope cabinets promises “24 of the most interesting objects from wood, insects eyes, flower dissections, scales of fish, and small insects. Each labeled and prepared in a manner not liable to decay.” There is also a broadside from the 19th century by Merchants & Payne, partners in microscope theater, who advertised “Wonders of the Microscope!,” a public show where microscope images could be viewed for 12 cents. 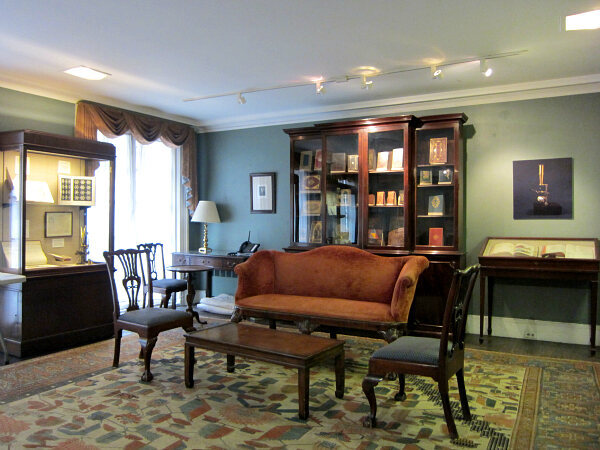 Installed in the Grolier Club’s Rare Book Room, Through a Glass Clearly is an intimate glimpse into several centuries of science, all aimed at perceiving the imperceptible, and trying to figure out just where those maggots and flies spontaneously came from.

All photographs by the author for Atlas Obscura.

Explore LA: Join Us This Weekend in Los Angeles