This bridge is embedded with a giant steel dragon that breathes fire from its mouth. 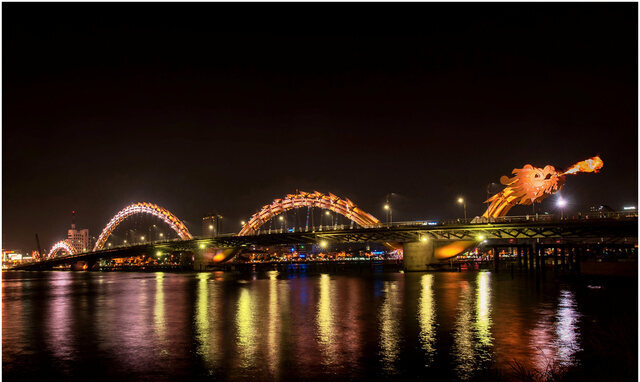 Dragon bridge in Da Nang, Vietnam (via The Verge)

Sure, the Brooklyn Bridge and Golden Gate Bridge may be quite stately, but they are sadly lacking any fire-breathing dragons. Now Vietnam has opened what is arguably the most awesome bridge in the world: a metallic dragon embedded in a bridge 1,864 feet long that shoots fire out of its head. Check it out:

The bridge in the port city of Da Nang, was opened on March 29 to mark the 38th anniversary of the city being taken by the North Vietnamese near the end of the Vietnam War (it had a large US/South Vietnamese air base). According to VietnamNet, it cost $85 million to build and had New Jersey-based Louis Berger Group heading its construction. The six lanes of traffic pass under the gleam of 2,500 LED lights that illuminate the steel dragon, which was designed after one from the Ly Dynasty. If the fire-breathing seems a bit menacing, it can also spray water from its mouth, like a gentle giant mythical creature. 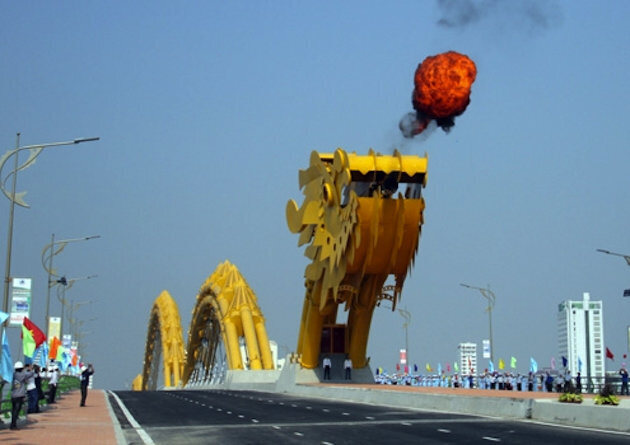