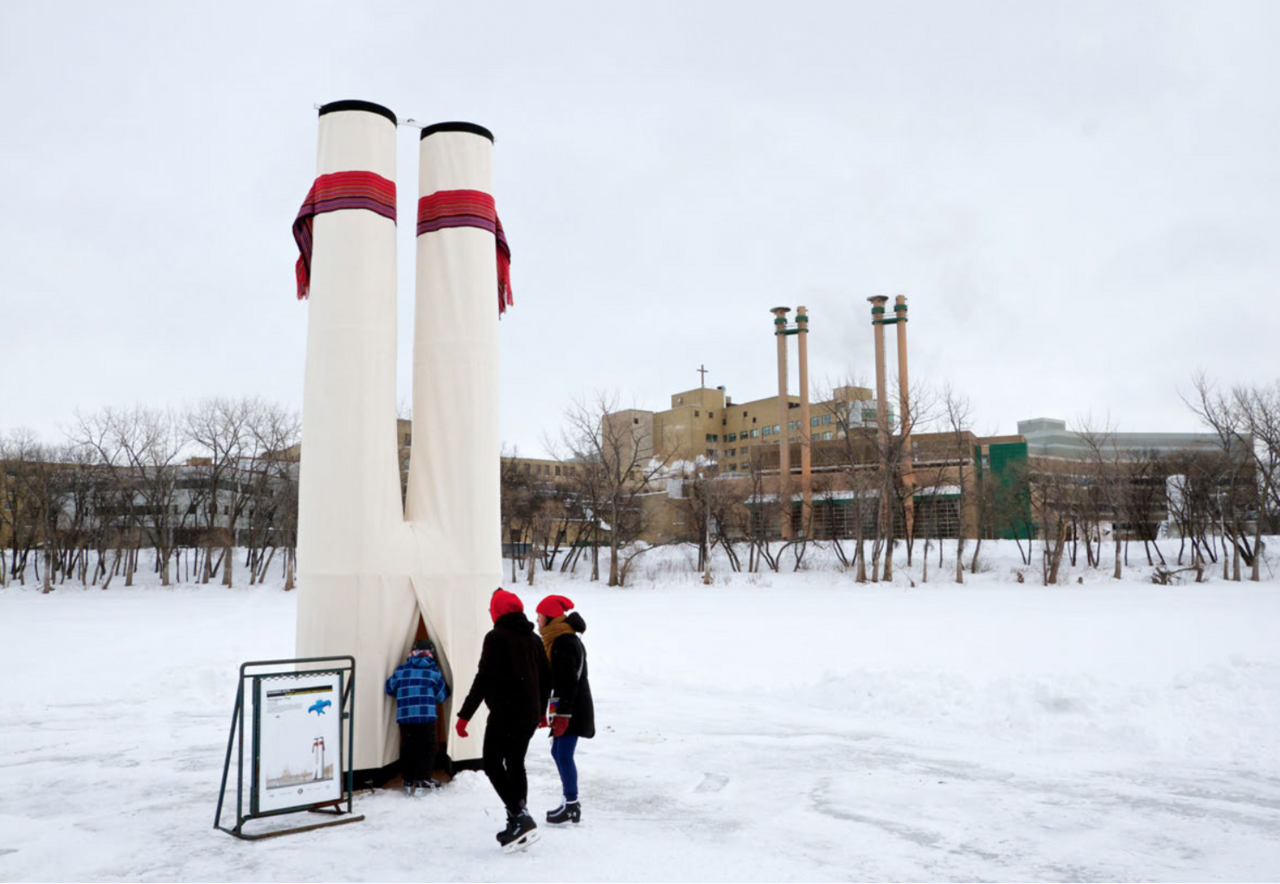 The shape of 2014's "Voyageur Hut" was inspired by an upside-down pair of pants. All photos courtesy Warming Huts: An Arts + Architecture Competition On Ice
In This Story
Destination Guide

Over the next couple of months, hundreds of thousands of adventurers will zip up their coats, pull on their gloves, and glide up and down the Red River Mutual Trail, a four-mile skating route in Winnipeg, Manitoba.

Those first two steps are essential: Winter temperatures in Winnipeg average decidedly below freezing. But if the skaters do get cold, no worries. They can just take a break in the belly of the giant cocoa mug, or step inside the larger-than-life golden bison.

These unusual shelters are two of the winners of this year’s Warming Huts competition, an annual contest that dots the frozen landscape with beautiful, whimsical places to rest. Over the past 12 years, the project, started by architect Peter Hargraves, has added a number of structures to the ice, including a tropical-themed “reverse snowglobe,” a massive tower made of stacked hay bales, and a frozen, kid-sized labyrinth. Some have stayed put, while others have been taken down, traveled to other cities, or simply melted away.

Hargraves, who has two daughters, says he first wanted to add warming huts for “selfish reasons.” “I would be out there tying three sets of skates and my fingers would freeze,” he says. “I kind of looked around and thought, well, let’s figure out a way of creating shelters on the ice that would be both interesting and functional.”

The first year, 2006, Hargraves and some architect friends designed and built the huts themselves. For more recent incarnations, they’ve fielded entries from groups, schools, design firms, and individuals. Big names have also contributed designs. In 2012, Frank Gehry’s firm made a “sculpturally casual” igloo.

This year’s celebrity hut, by avant-garde film director Guy Maddin, is called “The Temple of Lost Things,” and is made of ice and driftwood. When the river melts in the spring, the whole structure—pictured below—will float away.

“Warming” and “hut” are both loose terms. “Red Blanket,” from 2014, wasn’t a hut at all: It was made of long strips of red wool, which skaters could either swing around on or wrap themselves up in.

And while each structure is meant to provide a pick-me-up, they don’t want to be too comfortable: “If we create warm little cabins out there, the danger is that people will [stay in them],” says Hargraves. “We don’t want people to stay inside.”

This strategy—warming hearts and bodies—works like a charm, Hargraves says: “You can go out at 2:30 in the morning, and there are still sometimes hundreds of people skating.”

See more Warming Huts winners from years past below:

They're hard to reuse, and can be quick to burn.
architecture

Atlas Obscura readers shared the most remarkable collections of risers and treads that they've ever encountered.
architecture

In Singapore, Playgrounds Are Capsules of National Identity

4:16
Want to see fewer ads? Become a Member.
From Around the Web
Related

The capital of Alberta leans way in to its frigid winters.
Read more
Thanks for sharing!