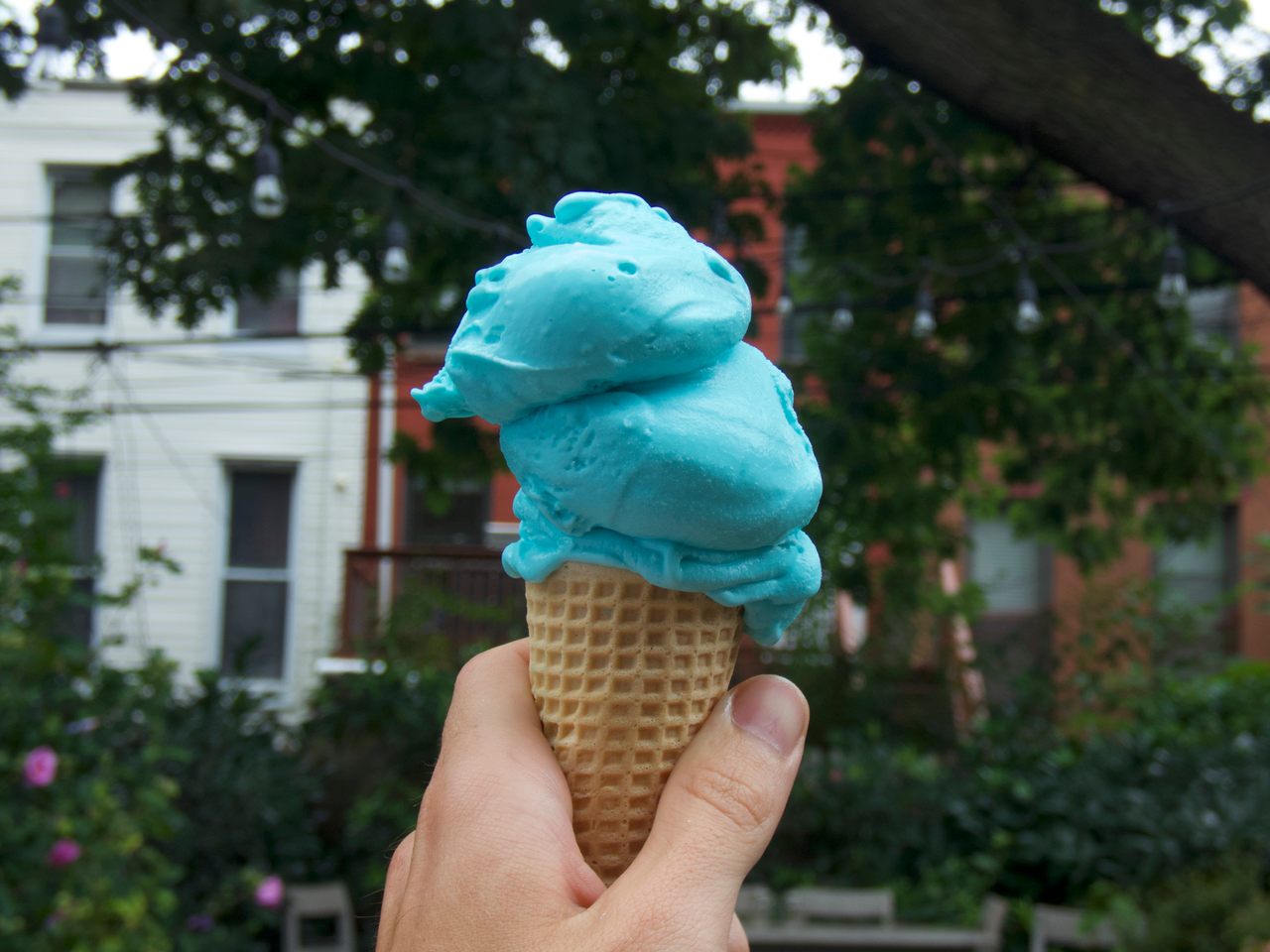 Blue Moon’s flavor dances on the tip of your tongue, taunting you into another guess, at turns familiar and elusive. Luke Fater for Gastro Obscura
In This Story
Destination Guide

Ask six different people what the flavor of Blue Moon ice cream is and you’ll get six different answers, at least. It’s almond, it’s raspberry, it’s lemon, it’s Froot Loops, it’s cotton candy, it’s beaver musk additive (seriously—more on that later). It is, perhaps, one or more of these flavors, but that’s not for us civilians to know. An alluring hue of cosmic blue, this ice cream has secrets.

Native to the Midwestern United States and little known elsewhere, Blue Moon’s flavor dances on the tip of your tongue, taunting you into another guess, at turns familiar and elusive. It’s bright, mildly citrusy, and almost fruity, but not in a cloying way. It’s the aftertaste in particular that is, frankly, somewhat infuriating, a flavor layer that seems to say, “you know what this is,” but you don’t—and in fact, very few people do. The Blue Moon ice cream flavoring recipe is proprietary information, and those close to it are tight-lipped.

“I have the formula here in front of me,” James Doig, vice president of Weber Flavors, the company that owns the flavor’s patent, told me over the phone. “But I’m not gonna tell you what’s in it.”

While I couldn’t have expected Doig to expose his company’s secrets for this article, part of me hoped he might. Instead, I sleuthed elsewhere. Beyond Doig, I teased expertise from a Milwaukee ice-cream salesperson and a professional confectioner to get as close to Blue Moon’s secret as possible. Their insights ranged from strong hints to educated speculation. And while we may never get a straight answer on Blue Moon’s secret ingredients, that can’t stop us from making our own mock-up at home.

Most Midwesterners don’t appreciate how place-specific Blue Moon is until they’ve left the region. One Midwestern cartographer, baffled by the flavor’s absence outside the area, crunched the numbers to map out a “Blue Moon Core Area (BMCA),” as mostly Wisconsin and Michigan, and sections of Indiana and Illinois.

“I thought it was everywhere until I started selling ice cream,” said Rebecca Stoffs. She’s a born-and-raised Midwesterner and current Sales Director at Chocolate Shoppe Ice Cream, a chain based out of Madison, Wisconsin, with franchises throughout the region.

This assumed ubiquity may spring from the flavor’s blinding popularity within the area. Within the Midwest—a region superlative in its ice cream consumption—Blue Moon is, by some estimates, several states’ most popular flavor. It also often appears as one of the flavors in an ice-cream blend known as Superman, another incredibly popular option in the BMCA. Given its omnipresence, Blue Moon’s makeup and provenance went unquestioned for decades. “It was just something you grew up with, you didn’t think about where it came from,” said Stoffs. “The origins are a little bit obscured there anyways,” she said, though that may be an understatement.

Many have ventured down the rabbit hole that is Blue Moon ice cream history, but none quite so eloquently as the Chicago Tribune’s Nara Schoenberg in her landmark investigative piece from 2007, titled, understatedly, “Blue Moon.” She tackles the prevailing origin story, which she calls “The Milwaukee Theory.” In this theory, Bill “Doc” Sidon, a multi-lingual Jewish chemist who fled Nazi-controlled Austria in 1939, landed at Milwaukee’s Petran Products in the 1950s—a company later absorbed by Weber Flavors. James Doig, a contemporaneous Petran employee who is cited heavily throughout the article, believes it’s here that Sidon invented Blue Moon flavoring himself. “I truly believe that Bill Sidon did the Petran version of Blue Moon,” Doig told Schoenberg, a sentiment he reinforced over the phone with me.

Schoenberg is then ruthless in dismantling the neat theory. She cites 1970s trademark documentation from Petran itself in which it claimed to have used the flavor as far back as 1939, while Sidon was still in Europe. She continues, presenting several small-town newspaper excerpts from the 1930s and ’40s on a new ice cream flavor described as “a fruit mixture with a delightful flavor and color,” called “Blue Moon”—again, before Sidon even had a role at Petran. Some mentions were even outside the BMCA, such as an ad for Isaly ice cream, which appears in an October 1931 edition of Ohio’s Marion Star and lists its flavors as vanilla, maple nut, and Blue Moon.

As is often the case with foods, hunting for Blue Moon’s provenance is a fruitless goose chase, and more importantly, it doesn’t get us any closer to that secret flavor. But this secret is so locked up anyway, even the companies who sell it don’t know what’s in it.

There is one theory out there, so preposterous in nature, it would seem to be trolling were it not so genuinely investigated.

In 2007, Weber Flavors’ owner Andrew Plennert told the AP that the secret ingredient was “more common than people realize,” and that it was in fact an agent “used in the pharmaceutical and beverage industries to hide bitter or harsh tastes.” Piecing together Plennert’s hints, Kasey Steinbrinck—writing for WhooNew, a news website for Northeast Wisconsin—presented a new theory. The secret ingredient was castoreum, she wrote, an FDA-recognized food additive extracted from the sacs between a beaver’s pelvis and tail, which they spray to mark their territory. It’s said, curiously, to smell like vanilla. Is Blue Moon beaver-spewn?

Stoffs and Doig were tickled by the theory, though they had never heard of it themselves (but they would say that, wouldn’t they?). In their defense, pharma’s bench of bitterness-masking agents runs deep, including lecithin, menthol, aspartame, and countless others, all significantly cheaper than beaver juice.

To her credit, Stoffs did graciously mail me several pints of Chocolate Shoppe’s Blue Moon on dry ice to aid in my quest. It arrived frozen, radiantly blue, shrouded in mystery. I took one pint straight to someone who—despite their grandeur in the ice cream world—is a native New Yorker, and was thus uninitiated to Blue Moon.

John Snyder is a third-generation confectioner who opened Ciao Bella Gelato as a teenager in the 1980s, then Il Laboratorio del Gelato in 2002. The latter of which makes more than 300 flavors and supplies about 600 restaurants throughout the New York City area with top-shelf ice cream. While he specializes in one-note flavors, scoops like yuzu mint, hazelnut amaretto crunch, and chocolate graham cracker grace the menu as well.

The man with a palate sensitive enough to develop distinct ice cream flavors for Mexican cinnamon and Vietnamese cinnamon, as well as white peppercorn and pink peppercorn, looked puzzled trying his first bite of Blue Moon. “It’s got a good texture, it’s interesting, very different,” he said. He honed in on a spice note, in particular. “I think there’s some cardamom going on in there, but there’s something else too—hey Nathan, you got a minute?”

He called over head chef Nathan Smith to weigh in. The two agreed it could be kaffir lime, also known as k-lime (a term now used in response to the derogatory roots of the term kaffir). When I explained that Stoffs had described the flavor as the milk at the bottom of a bowl of Froot Loops, it seemed to strike a chord with Smith. “K-lime has always tasted like Froot Loops to me,” he said, “but I’m also getting a little cotton candy.” One bite later, he clocked not just Lucky Charms marshmallows, but specifically the blue diamonds.

I ran the best reviewed mock recipe available online by Snyder, which consists of raspberry, lemon, and vanilla pudding mix. Raspberry and lemon didn’t resonate with him, “but the vanilla pudding? I could see a little bit.” Ultimately, if he were tasked with duplicating Blue Moon, said Snyder, “I would do cardamom with butterfly pea [for color] and a little k-lime.”

While Doig refused to read me the exact ingredients from the formula he held on the other end of our phone call, he did drop some hints that corroborate Snyder’s hypothesis. “We tend to keep things longer than we need to,” he said. Taped to the back of the original formula card (which is the same formula in production today), dated 11/8/1960, was the ingredient label used at the time of sale. He read the list for me: “‘Natural flavoring consisting of citrus oils, spice oils, pure vanilla extractives, water, propylene glycol sugar, gum arabic, certified color added.’”

Citrus oils, spice oils, and vanilla. Of course, k-lime and cardamom are, respectively, one of many citruses and spices (not to mention the pluralization of “spices” and “oils” indicating probably several different kinds of each), and vanilla is the base of nearly every ice cream out there. But from what I’ve tasted, Snyder’s analysis feels like a step in the right direction.

After several test batches, I’ve come to the unfortunate conclusion that Blue Moon ice cream is a flavor nearly unattainable by the average at-home chef. The recipe below—Frankensteined together from several great recipes, inspired by The Snyder Analysis, and obsessively tested alongside a pint of Blue Moon—tastes great, and bears a striking resemblance to the real deal. However, spoon-for-spoon next to the control, there’s just something missing—a brightness, a florality, a je ne sais quoi. Maybe it’s blue Lucky Charms marshmallows.

Whatever it is, if you do get your hands on the stuff and pin down the flavor, please, for the love of god, get in touch with us at editorial-feedback@atlasobscura.com.

This sweet, creamy enigma dates back to the late 1800s.
farms

From biscuits to cherry pie, these award-winning dishes tell family stories dating back to the 1800s.
food