What Is an Island, Exactly? - Atlas Obscura
Want to see fewer ads? Become a Member. 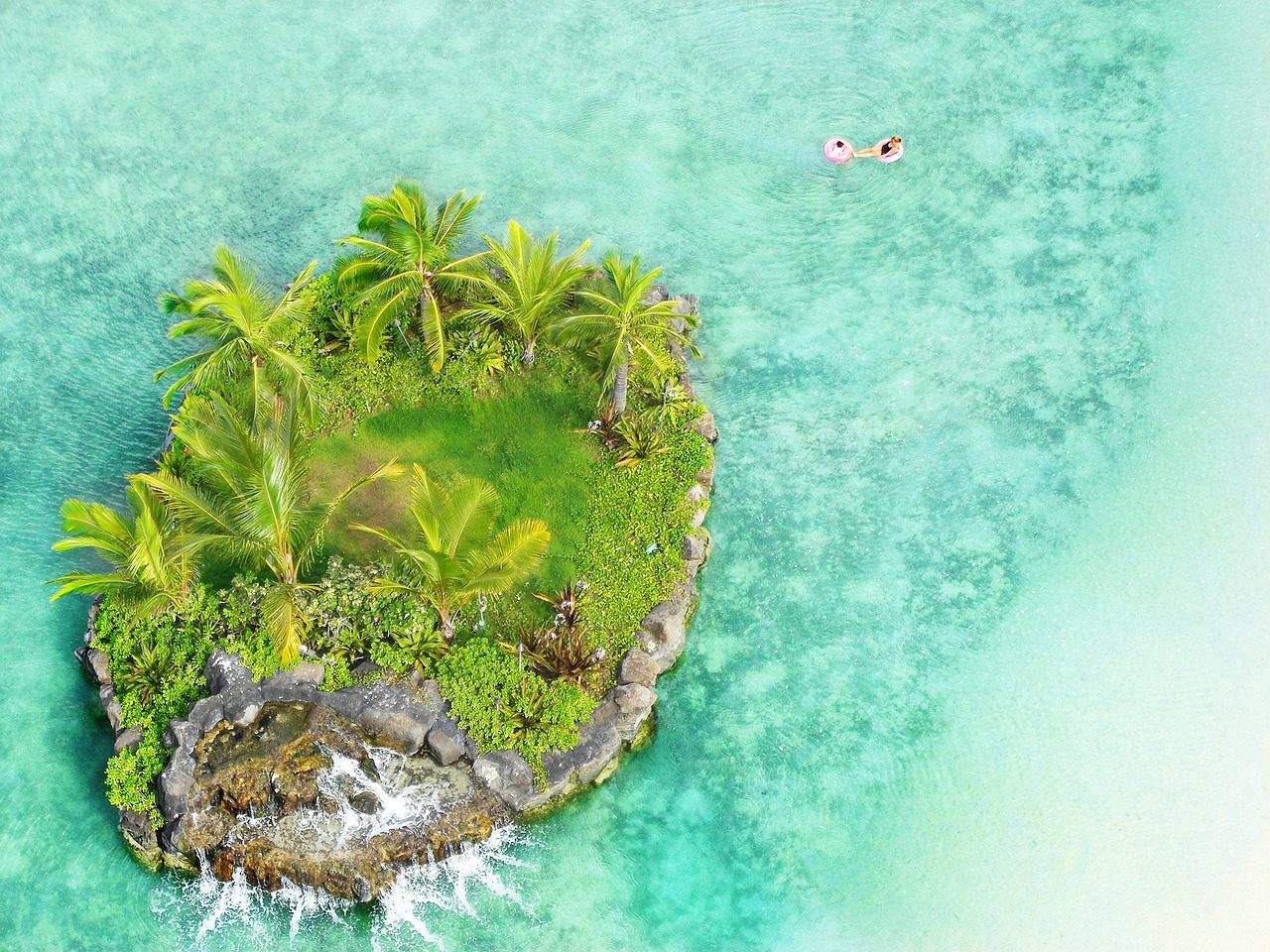 This one is too easy. Public Domain

Every once in a while, Josh Calder goes out to Rock Creek in his home city of Washington, D.C., and peers across the water at a little gravel bar. The small spit used to barely be visible at all, but it’s growing more robust, and vegetation has started cropping up there. When Calder swings by, he’s checking to see if a specific alchemy has occurred. He’s waiting for it to become an island.

If you close your eyes and picture an island, what do you see? In the popular imagination, the word conjures up somewhere stable, contained, and understandable: maybe a little rocky outcropping covered with gulls, or a round disc of sand with a single palm tree. In reality, experts say, things are a bit more like that gravel bar: shifty, complicated, and full of gray areas. If you want to get to know islands, it helps to start by asking yourself what the heck they are.

The geographer Stephen Royle, who has published various books about islands, has a simple definition at hand. “An island is a body of land surrounded by water, above water at high tide, and smaller than a continent,” he says. David Clague and Rosemary Gillespie, co-editors of the Encyclopedia of Islands, take a slightly wider view. “I think [of islands] in terms of isolation from the surrounding area,” says Clague. “They’re bits of real estate with some boundary that prevents or severely inhibits exchange of [animal and plant life].” Under this definition, underwater volcanoes can be islands. So can mountaintops, which often house plants and animals that wouldn’t be able to survive at lower elevations.

But thinking about islands is tricky. As soon as you reach the solid ground of one answer, more questions spread out ahead of you in an endless archipelago. Say you take Clague and Gillespie’s broad ecological definition. In that case, what counts as isolation? Start considering this query at different physical scales, and the possibilities proliferate: “Water-filled tree holes can serve as islands for many invertebrates,” Gillespie points out, “and an animal’s body is an island to the parasites it contains.” (Maybe it’s time to revise our adages: No man is an island, except to his own gut flora.)

This may tempt you to hop back to that first, more traditional answer, in which an island is a body of land surrounded by water. That definition comes with an upper limit—“smaller than a continent.” But now we have to define the lower one: how big does an island have to be in order to differentiate it from, in Royle’s words, “a mere rock”? For some, the answer is qualitative: according to Royle, Vikings didn’t think something was an island until it was far enough from the mainland that a ruddered ship was required, while 19th century Scotlanders defined it as a patch of land with enough pasture to support at least one sheep.

Contemporary politicians often find reasons to promote or demote places to island status. In one recent case, a Scottish politician caught heat when he suggested Skye might not be a “real island,” because it is connected to the mainland by a bridge. Calder jumps at any chance to “collect” a new island—he’s been to over 500—but even he has some heartfelt criteria regarding what that entails. “It’s a place, not an object,” he says. “So it should have soil and vegetation on some level. It can’t be just a rock or a bridge pier.” That gravel spit in the D.C. river, for instance, needs a tree or two before it makes the cut. (Calder also runs a Flickr group, Island or Not Island, dedicated to what he calls “definitionally problematic would-be islands,” such as ocean-bound fortresses and beautiful bonsais growing on floating logs.)

Others have attempted more quantitative assessments. In 2008, Royle writes, a nissologist—one who studies islands—named Christian Depraetere “selected a threshold of 0.1 sq km… and calculated that there are 86,732 islands at or above this size on earth.” When he reduced this threshold to .01 square kilometers, the number jumped up to around 450,000. When he brought it down still more, it rocketed to nearly 7 billion, “although there is some doubt as to the validity of his formula at this scale,” writes Royle. Sweden counted their own islands in 2001 and came out with 221,800. Then they tried again in 2013, with different criteria, and got 576. Meanwhile, if you go by the definition the European Union used to determine the sample set for a study of island communities, the whole country has only 24, says Calder.

The act of counting itself is difficult. Try to make a computer do it, and you’re at the whim of satellite imagery and pixel resolution, and boxed into whatever rules you set for the program. Whip out a paper map, and you’re counting on some cartographer’s thoroughness and honesty, as well as your own eyes. “No matter how tightly you set the definition and how many resources you pour into counting them, no two people will come up with the same number,” says Calder. He would know: “When I was bored at college I took all the maps of Connecticut done by the Geological Survey up to my desk, and sat there and counted every island on them,” he says. “I counted 1,900 in Connecticut alone.”

So let’s give ourselves a break and pretend that, by some miracle, everyone has agreed on how many islands there are. Almost immediately, we would all be wrong again. “They’re winking in and out of existence every minute,” says Calder. “Some island in the Congo River just collapsed finally and disappeared. Another one just arose out of the Baltic.” Mountaintops are getting cut off, and trees are filling with water. Our current climate weirdnesses promise to accelerate both sides of this arms race. As sea levels rise and flood some islands out of existence, others will be created out of swaths of land we now consider solid: Miami, say, or Maryland.

While all of this messiness may undercut some of our core ideas about islands, it certainly makes them more relatable. “I think people are attracted to islands because they think that they’re defined and precise and memorable,” says Calder. “But of course, just as in all areas of life, they’re actually full of gray areas and perplexity.” So if you’re wondering whether something is an island, try waiting around little bit. You never know what might happen.

The chance encounter has led to insights on how insects make it to distant islands.
Video • PinDrop