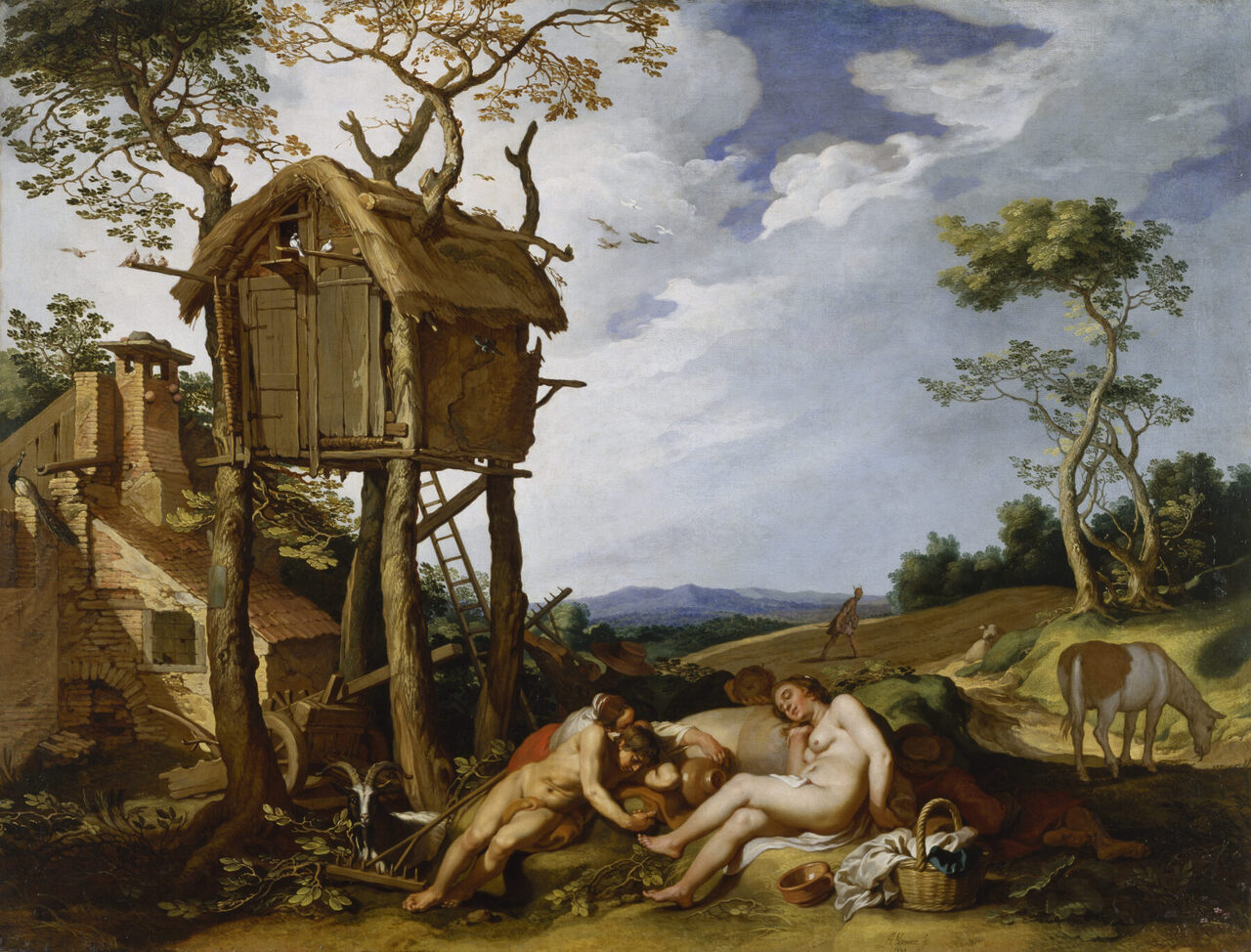 These people have presumably eaten too much darnel. Abraham Bloemaert/Public Domain

For many centuries, perhaps for as long as humans have cultivated cereal grains, wheat’s evil twin has insinuated itself into our crops. In a big enough dose, this grass, darnel, can kill a person, and farmers would have to take care to separate it out from their true harvest—unless they were planning to add darnel to beer or bread on purpose, in order to get high.

Darnel occupies a grey area in human agricultural history. It’s definitely not good for us. When people eat its seeds, they get dizzy, off-balance and nauseous, and its official name, L. temulentum, comes from a Latin word for “drunk.”

Darnel is a “mimic weed,” neither entirely tame or quite wild, that looks and behaves so much like wheat that it can’t live without human assistance. Darnel seeds are stowaways: the plant’s survival strategy requires its seeds to be harvested along with those of domesticated grasses, stored and replanted next season.

Oats and rye began their relationship with humanity in a similar way, but for whatever reason, they were developed into full-on food crops while darnel stayed in the shadows. “The interesting thing about darnel is that we’ve caught it in the act,” says Howard Thomas, a professor of biology who for years worked with darnel in the lab. The mimic weed took advantage of humans without fully bending to our will.

Thomas and two humanities-focused colleagues have been investigating darnel’s double life, as a menace and a sought-after intoxicant. They’ve found that darnel shows up time and again in key literary texts, as a symbol of subversion. “Where there is darnel, there is treachery and toxicity,” they write in the Journal of Ethnobiology.

Once you start looking for darnel, it’s everywhere. Ovid called it “eye-blightening.” (One of the plant’s effects is messing with a person’s vision and speech.) In the Bible, it appears in the “parable of the tares,” where an enemy sneaks into a farmer’s field and sows weeds–darnel–among the good wheat. Darnel shows up in Shakespeare, in Henry VI, Part 1, in Henry V, and in King Lear, where Thomas first noticed it.

Lear wears it in his crown of weeds, made up of “all the idle weeds that grow in our sustaining corn.” The symptoms of the king’s madness, Thomas noticed, are similar to the symptoms of darnel poisoning. He started wondering if Shakespeare had meant to insinuate that Lear had been eating the plants in his crown, and if his madness was, in part, a self-inflicted drunkenness.

If farmers never domesticated darnel and were wary of it, people still found ways to use it. In classical Greece, it was known as the “plant of frenzy,” Thomas and his colleagues found, and used in the rites of Demeter and Persephone’s followers. It was used in Europe as a medicinal plant, as an anesthetic, and to slow menstrual bleeding. But most often, it seemed to be baked into “dazed bread” or brewed into beer to give those basics an extra kick.

It’s impossible to say how often people used darnel purposefully for its mind-altering properties and how often darnel snuck in, unannounced and unwanted. In his book Bread of Dreams, the Italian scholar Piero Camporesi argued that European peasantry lived in a state of semi-permanent hallucination from bread adulterated with more malign grains, which they may have sought as an escape from daily life. Certainly, people seemed to know what darnel did and how to use it.

“There are sporadic reports of it being out and out cultivated, with the express purpose of energizing beer in particular,” says Thomas. “We had a correspondent on the Isle of Man tell use that it was quite openly cultivated there, for this purpose.” When darnel was grown for its intoxicating properties, though, it likely would have been somewhat analogous to cannabis today—planted, gathered and processed under the cover of more acceptable crops, or kept secret.

“I would love to try it,” says Thomas. “I have a friend who has a mill, and we have discussed the possibility of trying it and seeing what would happen.” But the reality is, that would be very difficult (and potentially dangerous) to do.

Darnel still manages to hide among crops in North Africa and in parts of Asia; one study found it made up almost 10 percent of a wheat harvest in Ethiopia. But modern agricultural techniques have eliminated darnel from crops in Europe. When Thomas looked recently, he could only find six instances of darnel growing in the British Isles since 2000. Darnel’s days of insinuating its way into European bread and beer, at least, are over.

The leafy green grows to monstrous size under the midnight sun.
farms

The Promise and Perils of Resurrecting Native Americans’ Lost Crops

A "plant explorer" helped establish the crop in California.
science

Dates from this desert oasis have been sweetening Egyptian tables since pharaonic times.
Gastro Obscura

Immortalized by “Anne of Green Gables,” the drink is a must-try for lit lovers on Prince Edward Island.
Want to see fewer ads? Become a Member.
Related

Restoring the grounds and its rare, heirloom crops recreated what was effectively the country's first seed bank.
Read more
Thanks for sharing!