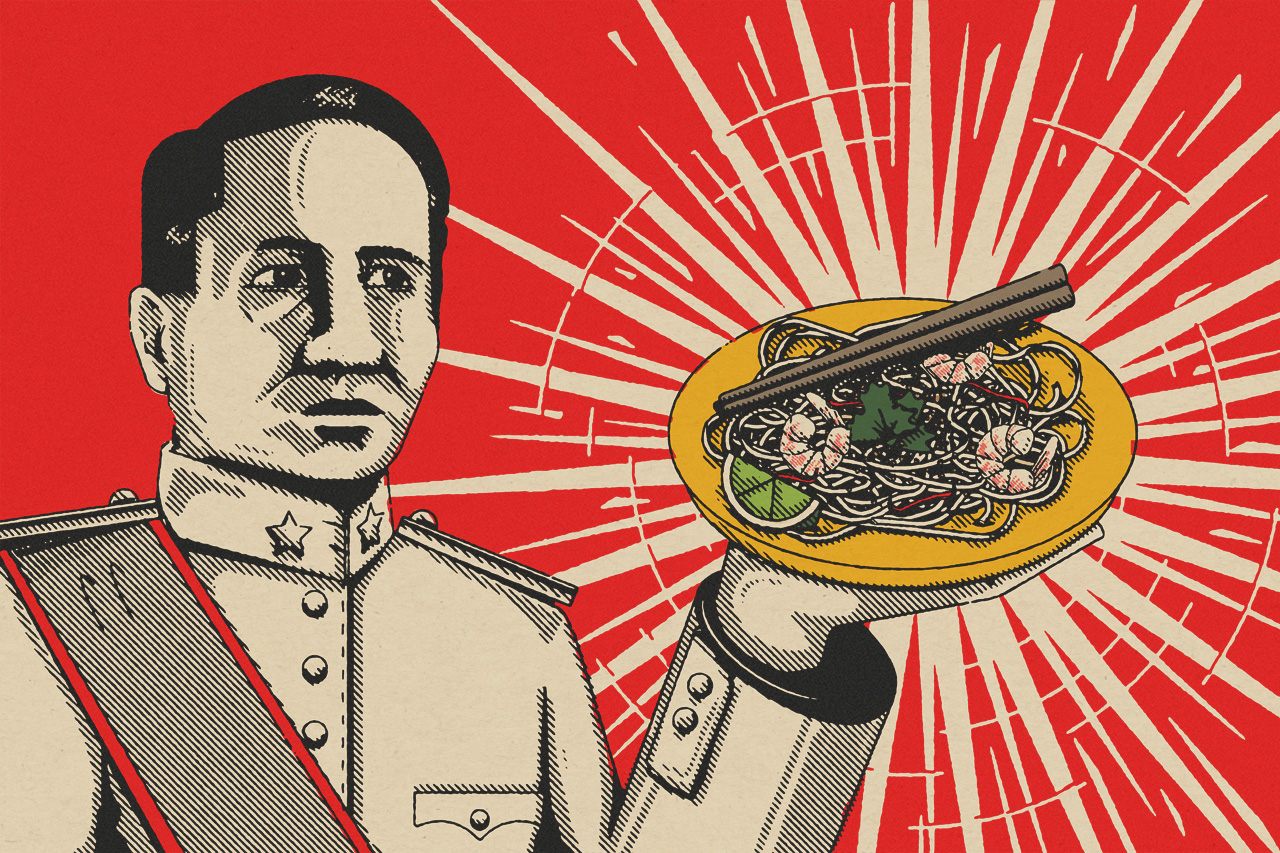 Pad Thai for everyone was once the party line. MICHAEL GEORGE HADDAD
In This Story
Destination Guide

8 Articles
94 Places
When authoritarian leaders obsess over a particular food, it can change how a country eats and drinks for generations. This week, we’re looking at five cases of dictator food projects and what they reveal about the power of food. Previously: how Mao made China mad for mangoes and how Nazi Germany sought whales to turn into margarine.

As World War II approached, Thailand was in a precarious position. For years, the country’s leaders had clutched their independence closely, worried about the French and English, who had colonized neighboring Cambodia, Laos, and Burma. Now, Japan was expanding imperially into East Asia, having invaded China in 1937.

At the time, the dish was little known, and no one called it “pad Thai.” In rice-centric Thailand, then known as Siam, the dish seemed more Chinese—similar noodle dishes likely arrived in Thailand centuries earlier with Chinese traders. But Thailand’s prime minister, who first rose to power as part of a military coup against the longtime monarchy, had spoken. As part of his strident nationalism, he wanted all Thais to eat pad Thai.

A noodle project may seem trivial in the context of world war. But Phibunsongkhram, better known as Phibun or Pibul in the West, thought it was the very seriousness of the situation that demanded this response.

Phibun believed that a strong national culture, including pad Thai, was key to Thailand remaining independent. Thailand was surrounded by colonies that European powers had justified on the basis of civilizing and modernizing their populations. Plus, Japan, which coveted control of natural resources, was creating an empire in East Asia. “We must be as cultured as other nations,” Phibun told his ministers in a speech. Otherwise, “Thailand would be helpless and soon become colonized. But if we were highly cultured, we would be able to uphold our integrity, independence, and keep everything to ourselves.”

This was the highly charged atmosphere in which Phibun pursued his noodle project. Phibun, who liked to compare himself to Napoleon, cast himself in the mold of fascist leaders such as Mussolini and mandated fawning coverage of himself as “The Leader.” As noted in Priceonomics, he pursued Thai nationalism by banning the Chinese language from schools, removing ethnic Chinese people from prominent posts, and having Chinese food vendors kicked off the streets.

“[Phibun] was determined that his most important objective was a cultural revolution,” wrote Thamsook Numnonda, author of Thailand and the Japanese Presence, 1941-45. “The heart of [Phibun’s] campaign was to instill a love for Thailand and to stir up pride among the people in all things Thai.”

A new national dish was just one part of the revolution. Eager to signal a break from the country’s feudal, monarchical past, he made sweeping changes that ranged from switching the country’s name to Thailand to dictating how Thais should dress. Wearing traditional Thai clothing, instead of the trousers for men and hats for ladies that Phibun preferred, could result in a fine. (He had thoughts on color choices too.)

Many national dishes represent long histories of local ingredients, immigration, and symbolism. But pad Thai’s culinary coronation was more a matter of chance. According to Penny Van Esterik, author of Materializing Thailand, Phibun “simply had this particular version of a Thai noodle that was made by his housekeeper in his kitchen, and he really liked it.” Phibun’s son, Nitya Pibulsonggram, told Gastronomica in 2009 that his parents “actually made pad Thai popular during the War.” While he doesn’t recall who exactly introduced the dish to the household, he said that his father and the government “thought it would be useful to popularize it because it is so nutritious.”

To Phibun, ensuring Thailand’s greatness required raising its standard of living, and officials were concerned about the Thai diet. Pad Thai, with its hearty mix of ingredients and the emphasis on cooking it in clean pots, fit the nation’s updated, modern nutritional guidelines. Like many Asian leaders, Phibun had studied in Europe. He associated Western ways with modernity, hence his desire to stamp out traditional Thai clothes in favor of European suits and skirts. But he also aimed to unify his diverse country around national pride.

In 1941, Japan attacked Thailand, and Phibun agreed to an alliance that gave Japanese troops free movement throughout the country. After the war, Phibun defended his cultural mandates as necessary to prevent Thailand from fully falling under the influence of much-more-powerful Japan. Near the end of World War II, Phibun was driven out of office. But while the new government rolled back much of his cultural revolution, there was no backlash towards pad Thai.

In Thailand today, there’s little sign of pad Thai’s origins as a bureaucratic project. Its best iterations draw crowds of enthusiastic eaters. It also has to compete within a rich food scene without government boosting and support, which is why it’s often outshone by dishes such as khao soi, the curry noodles of Thailand’s gastronomically rich north.

Abroad, though, Phibun’s original aim has been realized. Like a designated dignitary, pad Thai’s sweet noodles, tofu, egg, fish sauce, bean sprouts, and lime tell the world that Thailand is a place worth visiting, with a rich and distinct culture. Even if pad Thai is a curious choice of representative.