How Did a World War II Boat End Up at the Bottom of a California Lake? - Atlas Obscura
Want to see fewer ads? Become a Member. 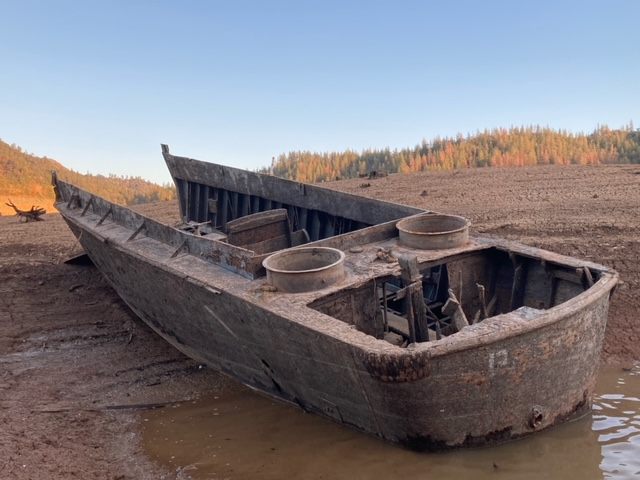 When James Dunsdon discovered the now-rare Higgins boat on the shores of Shasta Lake, it sat above the water line, almost as if it had just made a beach landing during a World War II invasion. Courtesy James Dunsdon
In This Story
Destination Guide

James Dunsdon was driving his truck through the darkness of a cold December night in the Cascade Range, almost 200 miles north of Sacramento. It was about to snow, and he was in a hurry. His headlights flashed on the vehicle in front of him, and for a moment, Dunsdon thought he was dreaming. There, gliding along the winding mountain road, was a World War II Allied landing craft. It was still wet, dripping as if it had just been lifted from the Mediterranean in 1943. “It just looked like the most surreal thing, this ghost boat,” he says.

Dunsdon wasn’t exactly surprised. After all, he had been the one to discover the boat on the shores of Shasta Lake in fall 2021, and he had been planning to retrieve it in the months since. That long and frigid December day, he and a small crew had resurrected the boat from its watery grave. But it was that knowledge that made the vision so remarkable. “The boat had gone from invading Sicily to being on a truck in the night in Northern California with an impending snowstorm,” he says. “That’s crazy.”

Dunsdon’s hunt for the ghost boat started with a rumor. The volunteer firefighter was working in the Shasta–Trinity National Forest when he heard about a mysterious boat that had been spotted somewhere along the lake’s winding, 365-mile shoreline. It had been revealed by the region’s drought, which had dropped the water level almost 200 feet that summer, to its lowest point in more than 40 years. Dunsdon enjoyed hiking through the forest on his days off, so he decided to look for the boat. Step one: Google.

On YouTube, Dunsdon found a video that showed the boat from a distance. A military vehicle hobbyist, he immediately realized it wasn’t just a scuttled motorboat or beached pontoon. “It looked like a World War II boat to me, and I knew enough to know that there’s not very many of those,” Dunsdon says. Now determined to find the craft, he asked around and narrowed in on the Bridge Bay area, on the south shore of the branching lake. He analyzed the video, too, trying to identify the location from the sun’s position. Finally, in October 2021, he set off into the forest.

Dunsdon hiked several miles to the lake, but his planned path detoured when a forest fire broke out. He continued along the shoreline and then he saw it. “It looked like it had just made a beach landing,” he says. The ramp at the front of the boat lay open, a familiar sight to anyone who has seen images of the D-Day invasion on the beaches of Normandy.

The boat is, indeed, from World War II. It is an LCVP (Landing Craft, Vehicle and Personnel), known as a Higgins boat, for its designer, Andrew Higgins. These 36-foot-long wooden boats, which could maneuver in just 10 inches of water and land on beaches, had been a vital part of the Allied strategy. “Andrew Higgins is the man who won the war for us,” Dwight Eisenhower said in 1964.

Once ubiquitous, Higgins boats are now rare, with fewer than 20 known to have survived. As Dunsdon got closer, he discovered that this example was in excellent condition. “It seemed like a movie prop,” he says. For Dunsdon, that meant that finding the boat was not enough. He needed to rescue it, too.

So he turned to the staff of Shasta–Trinity National Forest. They wanted the boat saved, too, but with two major forest fires raging in the area, it was hard to focus on a recovery operation. “There’s a ton of treasures out there and a lot of history out there in the forest,” says Ruth Esperance, public affairs officer for the national forest. They asked Dunsdon to submit a salvage proposal—but he had no experience with salvage. His worst fear was damaging the craft in the process. Still, there was a deadline: When the rainy season started in late fall, the boat would likely be submerged again.

Originally, Dunsdon planned to use an excavator and a crane, but by the time he got salvage permission a few weeks later, the lake had started to rise. So it was on to plan B: divers and airbags to float the boat to an accessible stretch of shoreline, where it could be loaded onto a trailer.

As the salvage crew he assembled—a few professionals and a couple of friends—prepared to refloat the 80-year-old boat in December 2021, they first lifted and secured its open ramp. That gave Dunsdon a clear view of the bow and the still-bold white numbers painted there: 31-17.

With that clue, part of the boat’s history immediately became clear. Higgins boat 31-17 was assigned to USS Monrovia, a Navy ship that was General George S. Patton’s headquarters when the Allies invaded Sicily in July 1943. The boat was later involved in the Battle of Tarawa in the Pacific. With additional archival research, Dunsdon is sure he’ll discover more about the boat’s wartime engagements. “The Monrovia had seven D-Day invasions in World War II—every invasion was known as D-Day in World War II—so potentially this boat went through seven D-Day landings, survived all of that and somehow came back,” he says.

The mystery that will be harder to solve is how the boat made its way to Shasta Lake, 100 miles from the Pacific Ocean, and thousands of miles and eight decades away from the Pacific Theater of World War II. Dunsdon speculates that 31-17 may have been refitted at a West Coast naval base after the war and sold for surplus. “We really don’t know,” he says. “It’s as simple as that.”

Higgins boat 31-17 now sits on Dunsdon’s property in Northern California, where he has become an amateur conservator. On advice from a man who found a Higgins boat himself on a river bank in France about 20 years ago, Dunsdon is keeping the boat in a supportive cradle in a shaded spot, with water misters to keep the wood—which had submerged for perhaps a half-century—from drying out too quickly. Eventually, the boat will become part of the collection at the Nebraska National Guard Museum in Columbus, Nebraska—the birthplace of Andrew Higgins. “I’m not really the owner,” Dunsdon says. “I mean, legally maybe, but this is a piece of American history, of world history.”

Dwight D. Eisenhower and Marlene Dietrich both belonged to this unusual club.
tunnels

Louisiana locals and historians are both commemorating and investigating the mystery-shrouded incident.
List