10 Places 12-Year-Old Me Would Love to Live - Atlas Obscura
Want to see fewer ads? Become a Member.
In This Story
Place

This ultra-modern home clings to the slope of the Hollywood Hills on a precarious stilt.
Place

House on the Rock

A bizarre house filled with an astounding array of collections.
Place

The real life Hobbiton, this sheep farm has been forever transformed since being built for The Hobbit film series. Home is where the imagination lives. My 12-year-old self only required a small bedroom to create an expansive world of wonder where epic dramas played out and fantasy kingdoms were captured and rescued on a daily basis. Twelve-year-old you might have had a blanket fort under a grand piano, a survival tent in a modest patch of backyard, a treehouse that consisted of a couple sturdy limbs and some boards nailed to a trunk.

No matter where you grew up, your home was the world in which you discovered and designed other realities for yourself — places you would call yours if you could. The home of your dreams might’ve been inspired by a beloved book or an exciting film, or maybe it manifested purely from the rapid fire of your developing brain. Whatever the source, even as adults, our inner child lights up when we recognize a nook or cranny in this world we we would have drooled over as a kid. My inner kid is the long-burning lamp of curiosity that inspired me to compile this list.

So here we go: Places my 12-year-old self would have loved to call home… At home on The Shire… (photograph by Rob Chandler)

What I loved most about Tolkien’s literary universe as a kid was the incredible landscapes and magical environments he created. Many 12-year-olds have imagined the sights and smells of a cozy Hobbit dwelling in the Shire, perhaps curled up with that very book in front of a tiny hearth in a hole underground.

A local farm in this rural community of New Zealand caught the eye of Lord of the Rings director Peter Jackson for its lush, rolling hills and whimsical pastoral. He knew immediately it was the Shire. Now Hobbit-abandoned, this tiny, charmed village is open for tourism. The Chemosphere in Los Angeles, California, looks like E.T.’s ship lighting down in lush greenery atop a hill. What kid wouldn’t dream of being the captain? The Modernist house was designed by John Lautner in 1960. Lit at night, it looks ready to take off into the cosmos. 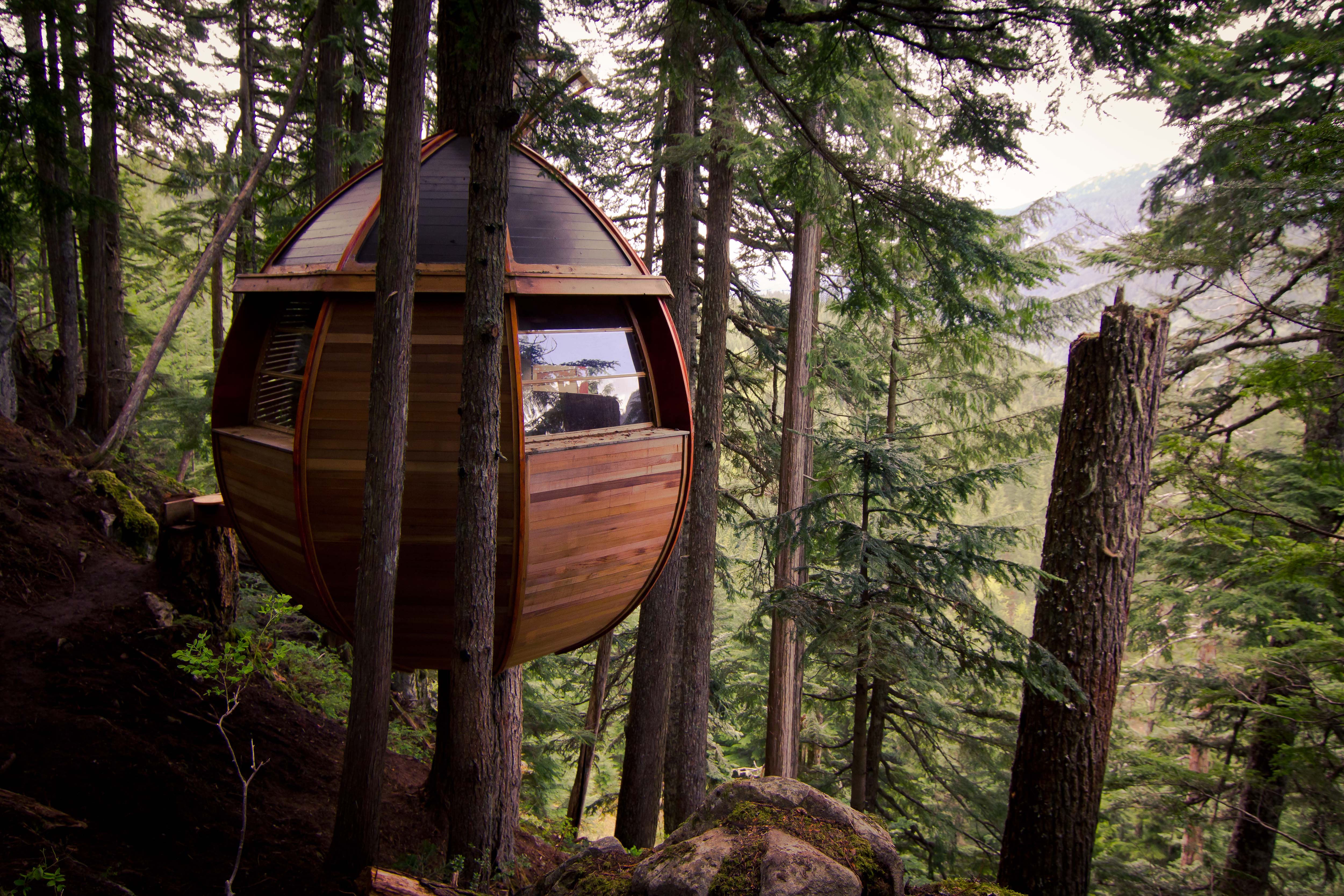 In Whistler, Canada, I can see myself now, uncupping a long telescope from my snug little lookout, like a long shot from Wes Anderson’s Moonrise Kingdom. Let your inner child behold: the HemLoft.

Says carpenter, dreamer, and lover of ingenuity, Joel Allen, on his site: “The HemLoft is a self-funded secret creation that I built on crown land in Whistler, Canada. It hangs on a precipitous slope, in a towering stand of hemlocks, about a five minute walk from the nearest road…” With good friends, Allen lovingly designed and built this beautiful suspended treehouse in 2008 and documented the experience. You can watch some of it in this video. In 2013, Hemloft was give to the Canadian Wilderness Adventures, which took it apart and has plans to reconstruct it at some point in the future. Carousel in the House on the Rock (photograph by Rob Pongsajapan) 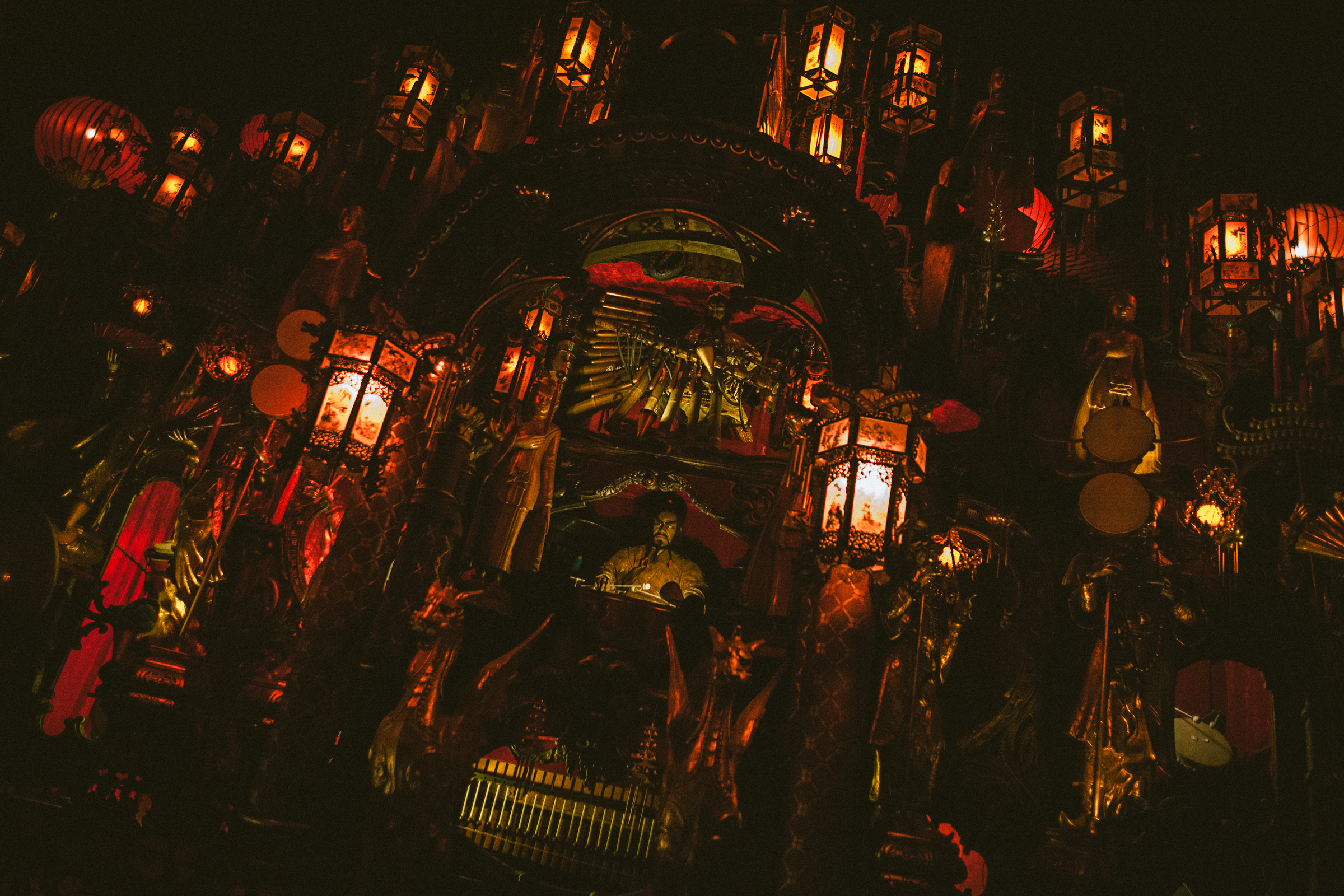 Inside House on the Rock (photograph by Garret Voight) Alex Jordan was an architect with a chip on his shoulder about Frank Lloyd Wright, and an unstoppable imagination. Inside the House on the Rock, what looks to be an unassuming Wright knock-off planted into a large rock in Wisconsin is a sometimes charming and sometimes chilling odyssey into the manic mind of a Pan-esque visionary, who kept building deeper and deeper until the day he died.

Wander room after room of glass cases full of toy collections, visit tiny recreations of villages, and gaze in wonder at a carousel of strangely painted mythical creatures. All my 12-year-old self wanted when I visited this rural spot was to somehow jam myself into an arcade machine or a grandfather clock and hide until the museum closed, so I could explore after dark. 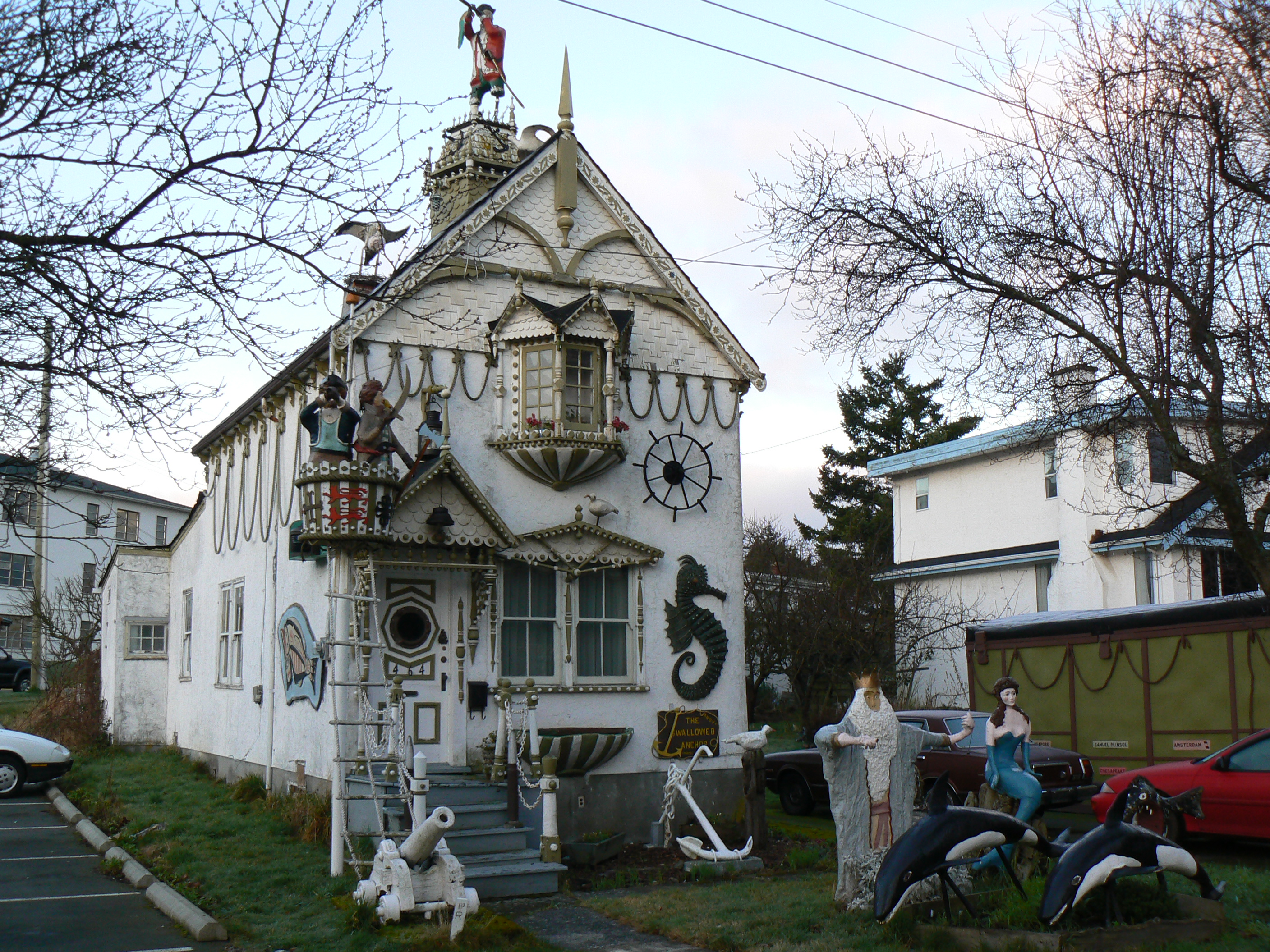 The pirate’s life for you… (photograph by Yvonne Fried)

It may just be a small Victorian ornamented in eccentric Nautical ephemera, but my 12-year-old self would have called this infamous little abode in a West Bay Marina village in British Columbia a pirate’s quarters.

Legend has it that the owner and bedazzler of this home was an older gentleman who would dress as a mermaid and row a small boat out from this house on the regular to live the sea life. Much of the loot decking this home he salvaged locally, so it holds a lot of history. Unfortunately, the house might soon be demolished. Become a scientist and you can actually live here! (photograph by Ronald Hall)

When I was a preteen, my exposure to environmentalism didn’t necessarily come from science classes or local activism. But I did get some insight on the relationship between humans and this planet through the misadventures of Pauly Shore and Stephen Baldwin in Bio-Dome.

I was thrilled to discover that the futuristic complex this stoner comedy’s protagonists mistake for a shopping mall actually parodied a real-life Bio-Dome in the Arizona desert, where scientists were sealing themselves in to carry out environmental research missions. Launched in 1987, the Biosphere 2 is currently owned by the University of Arizona and is now more of a learning and research center than a closed ecosystem. Your own private island of sulk… (photograph by John Hayes)

The dream of youth: Disappearing from the pop culture-drenched, angst ridden existence to a private island somewhere remote, where you can sulk in a solitary tower or, better yet, create your own reality. This might be what Michael Jackson, our contemporary culture’s perpetual adolescent, had in mind when he attempted to purchase Singer Castle on Dark Island for his own beloved Neverland.

In the Thousand Islands region between the United States and Canada rests this mysterious private island upon which looms the eerie castle of one of the royal families of Golden Age New York City. The family who owned the Singer corporation (that’s right, sewing machines) had the castle built in 1903. Once known as the Towers, the residence is full of secret passageways from its days as a bootlegger’s station during Prohibition. Until open to tourism in the last decade, Dark Island was a private home. A life aquatic… (via PoseidonResorts.com)

An underwater existence would sound like something out of a sci-fi novel to 12-year-old me, but I’d jump at the chance to sleep, dine, and read books with the fishes. In the last couple of years, great big fantastical designs of underwater living spaces have started to become a reality, the most promising of which is the Poseidon Undersea Resort off the coast of Fiji, now taking registration for future reservations.

In case the responsible adult in you feels a bit wary: Under the resort’s FAQ, prospective guests are reassured that, unlike underwater research habitats, the pressure inside the hotel is as above-sea-like as possible and does not change. For any rural or city kid who used to try to get to the highest height, whether that be the roof of your home, your middle school, or the local make-out point with your camping telescope, this is what happens when you grow up to become a cardiologist.

Dr. Mario Motta’s breathtaking view of the cosmos was an addition his inner child made to the blueprints for his lovely Gloucester home in 2004. From his gorgeous DIY observatory, this amateur but prolific astronomer takes stellar photographs, some of which he shares with his local astronomy club here. Knights eternally at your service… (photograph by Jack Countway)

Not only is West Germany’s Burg Eltz aesthetically the storybook castle of my childhood dreams, but it has the delicious reputation of being haunted by medieval knights. What more could my inner kid ghostbuster ask for?

I’ll admit it, I’m still on Geocities-bleeding-text-and-animated-bat-gifs-style ghost websites some late nights, seeking out reportedly haunted real estate all over the world. But you don’t have to dig through the supernatural internets for info on how you can experience Eltz castle for yourself, just go here, it’s open to explore for both intrepid children and young-at-heart adults.

Find more treehouses, castles, and underwater wonders that your 12-year-old self would adore on Atlas Obscura >

Join us for a daily celebration of the world’s most wondrous, unexpected, even strange places.
collections

This unique house features both inventive architecture as well as what is considered to be the one of the first Black-owned businesses in the state of Texas.
Sponsored by Visit Seguin
architecture