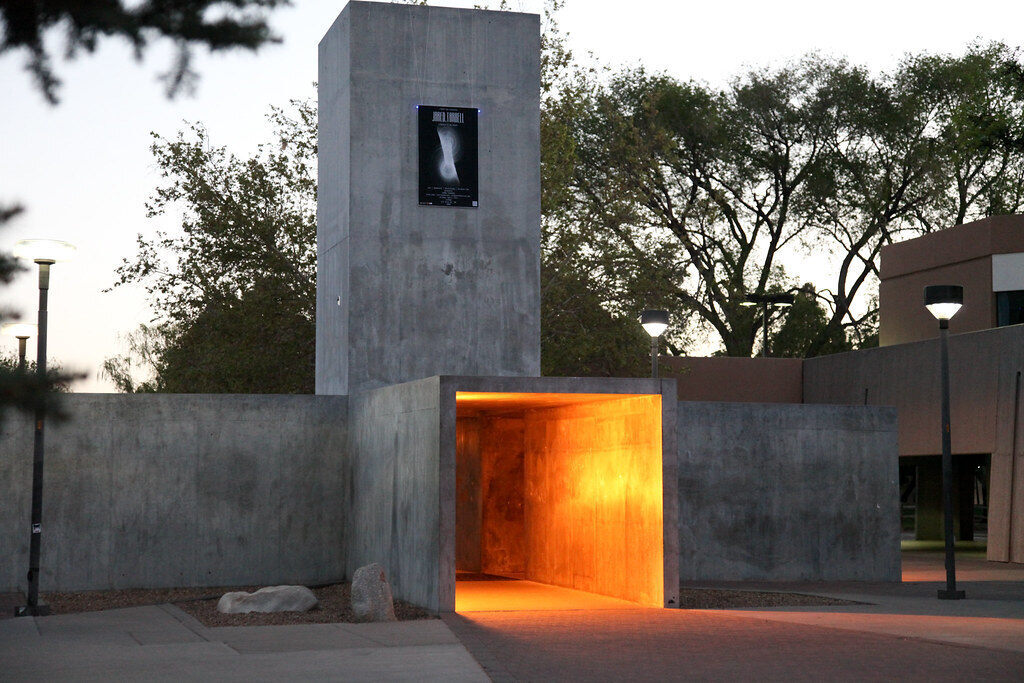 University of New Mexico's Center of the Universe is just one of the world's great campus curiosities. Jared Tarbell/CC BY 2.0
In This Story
Place

The statue of John Harvard isn't actually John Harvard—or even, technically, the founder of the school.
Place

A Frankenstein blend of science and art allows one tree to produce 40 different types of stone fruit.

Attending college is often an unforgettable experience, especially when it comes to the opportunity to immerse yourself in a unique campus environment. Nearly every college or university has a distinctive landmark that serves as a touchstone among everyone at the school, but which might be relatively unknown to outsiders.

Whether it’s an abandoned tunnel that runs underneath the grounds (this one is particularly common), a beautiful old archway or an unforgettable work of art that acts as a geographic North Star, seemingly every campus has some kind of special, meaningful spot. Recently we asked Atlas Obscura readers in our Community Forums to tell us about the hidden wonders at their alma maters, and we got an education.

Check out some of our favorite responses below, and if you have a unique campus landmark of your own that you’d like to share, head over to the forums, and keep the conversation going! Even if you’re no longer a student, college campuses have a lot to teach you.

“I did my undergrad at Syracuse University in Syracuse, New York, which has the incredible Tree of 40 Fruit. I passed by it many, many times on campus before finally hearing about it/finding its location during my senior year.” — Kerry_Wolfe

“There’s a tunnel system that runs underneath the entirety of UCLA. One of the entrance points is the orchestra pit of Royce Hall, where I used to work as a stage tech. Never got the chance to explore it.” — tralfamadore

“The chapel is originally from the Rhone Valley in France, thought to be built in the 15th century. Legend has it that Joan of Arc prayed there before leading her troops. It was moved in pieces during the ‘20s from France to Long Island, New York and then moved once again to the middle of Marquette’s campus in the ‘60s.” — colinbennett13

“Each year, the graduating class at Meredith College designs and dedicates a doll to the private college. This tradition began in 1936. Each doll is dressed in popular fashions during their year of dedication and are on display in Johnson Hall. The true curiosity about Meredith College is that the college was chosen as the most haunted college campus because of the doll collection.” — lizbethlorraine816

“Miami University (the original, not the one in Florida) Alumni Hall, 1910. The old library now houses the Architecture and Fine Arts department studios. Back in the late ‘70s, during an early a.m. work/study/design session, a few of us, from the senior architecture studio, managed our way into the central core of the building which is where the old library stacks were located. The building itself was three stories, but the central core was comprised of seven opaque glass floor levels. The stacks themselves ran from the basement all the way up, with the glass floors built around them. We found the stair access to the seventh level was blocked due to that level housing the University archives. Well, not to be denied, we did the ole ‘Paper Chase’ option and pushed out a stack shelf that was up in the seventh level and climbed through. No shenanigans, we just wanted to say we got up there. What a great memory, unfortunately, the stack area is long gone and turned into additional studio space.” — teesquar

“Philadelphia is a lover of odd sculpture and an admirer of the original rebel, Ben Franklin. So, when UPenn placed a large (literally) statue of Ol’ Ben on campus, meh, no big deal. However, one Swedish sculptor, Claes Oldenburg, noticed how stout Mr. Franklin was. Like any artistic type, his imagination kicked in. He imagined that Ben perhaps had the age-old problem many stout people experience, that is popping a button around the belly when you sit down.” — atiba19971

“Who could forget the famous John Harvard ‘Statue of Three Lies in Harvard Yard’ in Cambridge, Massachusetts?

Technically, it is the Statue of Four Lies, in that it’s said to stand in Harvard Yard, when in fact, it sits.” — val

“At Pasadena City College in Pasadena, California, just kitty-corner from Caltech, sits a small structure that you’ll miss unless you are looking for it—an astronomy observatory. Albert Einstein visited the campus in February 1931 to dedicate the building, with about 8,000 people in attendance.” — mexnomad

“In Leiden University there is my favorite: Einstein’s Sink.” — CoolCrab

“The campus of my alma mater, Twente University, features a piece of art (in quite a prominent location) that was a mystery for a long time. Nobody knew where it came from when it appeared in April 1974. Only in 2013 were the makers revealed. All this time, the groundsmen of the university took care of it and even fixed it.” — pboersma

“Flagler College is in the heart of the old city and has a marvelous tour that is guided by current students. On that tour, you get to go to the dining room that has original Tiffany Glass windows. They are stunning! The school started life as a winter hotel for the upper crust of the American industrial era. It has so many beautiful architectural features that I cannot begin to name them all. Highly recommend visiting Flagler College and the surrounding historic area.” — JRJ

“We have steam tunnels like this at Southern Illinois University in Carbondale, Illinois, too. I think they’re also under EIU. I work in the library and am on a committee that holds training, but also fun things too. We did a behind the scenes, hidden secrets of Morris Library, and we peeked into one of the tunnels that connects to our building. Creepy looking! Of course, there are the urban legends about students sneaking into them and dying, etc. LOL! Pretty sure no one has actually died in one!” — toripaige

“Lots of people are familiar with the ‘Golden Dome’ at the University of Notre Dame in South Bend, Indiana. But how many have seen it from the inside?” — johnamiddleton

“Capilano University in North Vancouver, British Columbia, Canada, is situated in the middle of a forest close to the mountains. There are lots of cool trails to hike nearby, and we connected one of them with the campus to make the Cap U 50 Trail to commemorate our 50th anniversary. It’s a short, 1.6 km trail that students, faculty, and staff can do to take a break from it all.” — hmerali

“At the University of New Mexico, I was stunned to find an art installation modestly titled, The Center of the Universe. The installation is a brutalist cement structure with no obvious purpose, effectively near the most populated area of campus.” — civan93

“‘Dividing the Light,’ a Skyspace by James Turrell, is the most recent and perhaps most glowing example of public art on the Pomona College campus. Opened in fall of 2007, the architectural installation heightens the viewer’s awareness of light, sky, and the activity of perception.” — anne_m_bray

“Eldrige was an associate professor of painting at Ohio University’s School of Art and Design from 1958-2014. He’s one of the few artists listed in the Dictionary of the Avant-Gardes by art critic Richard Kostelanetz. His work, which tended towards the esoteric, might be known most specifically in a regional sense by his 50-by-80-foot mural in the amphitheater of Siegfred Hall on Ohio University’s campus.” — deimek

“Millersville University rose from the ashes of the Civil War. It’s actually a few years older than that, but at its founding in 1855, I had heard legend that every building at the time was connected by underground tunnels. This fascinated me for my entire time at the school, and underclassmen had to park in a faraway lot, close to nothing but a stormwater outflow. For years I walked past that and wondered if it was my access point to the tunnels. I had friends that worked in the library, and they swore that they used the tunnels for storage. My imagination ran wild. I did nothing about it. Finally, the night before I was supposed to graduate, I went to a party. I don’t remember much about it, but at the end of the night, it was me and a half dozen of my friends hanging out on a balcony. The guy who lived there set off his fire extinguisher, coating the whole apartment in corn starch, then came out to the balcony to tell the six of us that the party was getting out of control and that we’d have to leave. We did. I was milling about on the lawn like a zombie who is unaware of what a zombie is, when I heard my name. I jerked around and saw my friends Parker, Ben, and Jesse. They had been looking for me for a while, and it was time. We were going into the stormwater outflow. The four of us crawled in. In this era before camera phones and cell phones of any kind, really. They had grabbed flashlights, but the only thing I had brought was the faint odor of corn starch. About 300 feet in, Ben and I, who were both graduating in the morning, decided to go back to get a video camera. Parker and Jesse continued on. After retrieving the camera, we walked back to the grate that we told the others we would meet them at. My stomach sank. Two police officers were parked on top of the grate and Ben and I swore that they were there to drag out our buddies. Ben and I cowered in the bushes for a half an hour until the cars pulled away. Locked away from the world in the bowels of the university Jesse and Parker thought we got in trouble. When we eventually got them the camera, they were sick of the spiders and decided to just come back out. I was spurred on by that first journey and bought a skateboard with gigantic tires to carry me through the underworld, but alas, we never returned. The skateboard eventually rotted away, as did my desire to return to the bowels of Central Pennsylvania.” — fred

How a fusion of at least four cuisines created a beloved and misunderstood dish.
collegesshow & telluniversities
Keep Exploring
skulls

They were part of a broader wave of adventurous stein-craft.
colleges

The College Student Who Decoded the Data Hidden in Inca Knots

At least they fixed it quickly.
colleges

The Deposition ritual, inflicted on Swedish and German students by faculty, was not for the faint of heart.
Related

One way to reduce sexual assault against women, the club's board president said, was not to have them around.
Read more
Thanks for sharing!