A Bonnie Scottish Gathering in the Middle of Texas - Atlas Obscura
Want to see fewer ads? Become a Member. 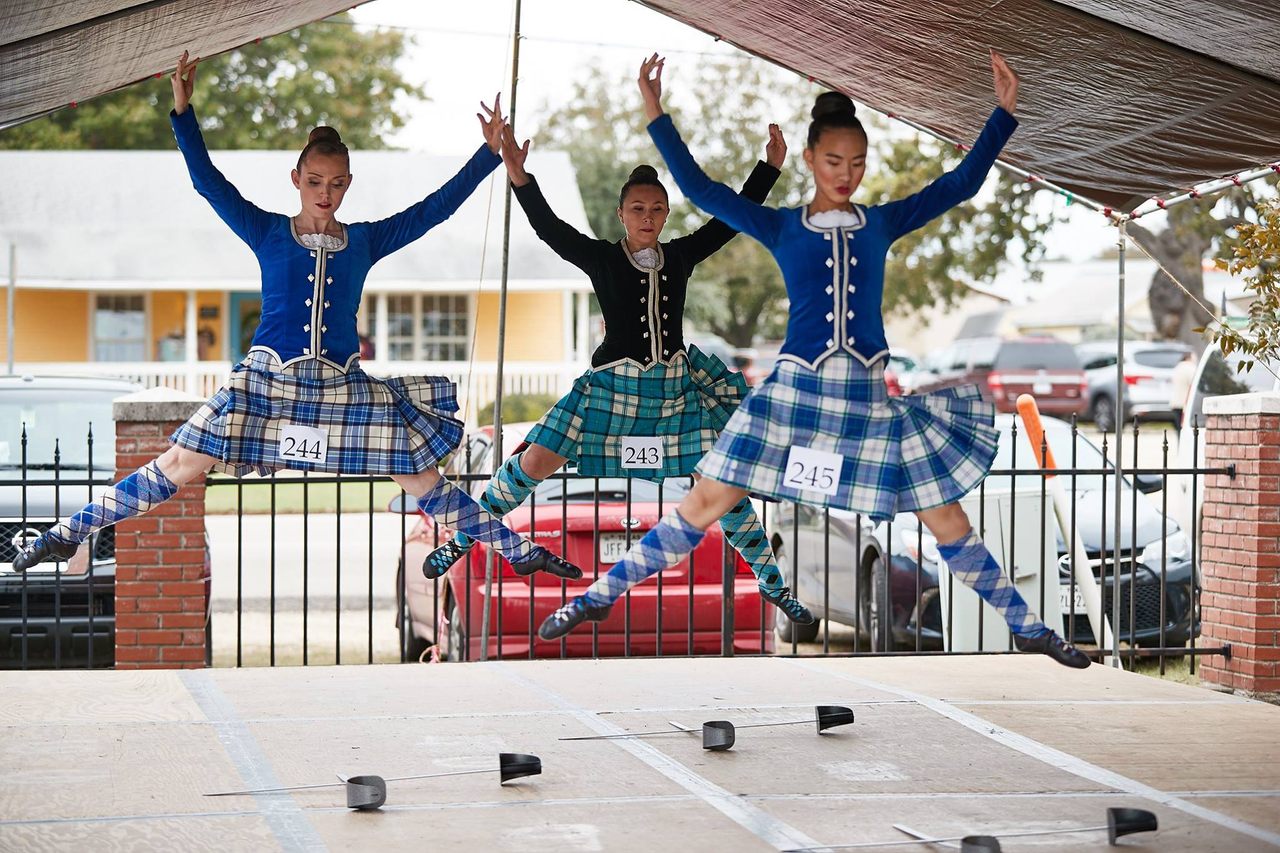 Highland Dancers get some air at the Scottish Highland Games in Salado, Texas. Photo Courtesy of Salado Museum and College Park. Written by Madeleine Aggeler

“Who picks up a telephone pole and flips it end over end?” wondered Dave Swarthout, the director of the Salado Museum and College Park in Salado, Texas. “I mean, who does that?”

Swarthout was hunched over last year’s program for Salado’s annual Scottish Gathering and Highland Games, Salado’s largest event of the year, and the largest sanctioned Highland Games in the state of Texas. (Sanctioned, meaning: they have paid judges score the events instead of volunteers.) Specifically, he was examining a picture of a burly man in a kilt holding the bottom of what indeed appeared to be a massive telephone pole that had, presumably by a disastrous turn of events, ended up precariously balanced in the palms of his hands. This was the caber toss, Swarthout explained, a traditional Scottish sport that was supposedly first developed by 16th century lumberjacks who would goof off by tossing around bits of lumber. It goes like this: Competitors lift up a large, wooden pole known as a caber, and flip it end over end so that it falls as close to the 12 o’clock position as possible.

Each caber is between 17 and 20 feet long, and weighs between 100 to 200 pounds, which means that the answer to Swarthout’s question about who, exactly, has the will and ability to undertake such a feat is: someone very, very strong.

Right off I-35 between Austin and Waco, Salado is a small, storybook town full of gabled bed and breakfasts, overstuffed antique shops, and seemingly 100 art galleries. Except for 2020, when it was suspended because of the pandemic, Salado has hosted the Scottish Gathering and Highland Games every second weekend in November since 1961. Besides the caber toss, a crowd favorite, the weekend includes the “calling of the clans,” a ceremony where members of all the attending Scottish clans gather and march through town in their full Scottish garb, as well as a tartan dinner, a bagpiping competition, a Highland dance competition, and athletic events like the hammer throw, the weight throw, and the stone toss. There’s also a dog parade and the bonniest knees contest.

“You’d be surprised at the number of men that agree to be in the bonniest knees contest,” Swarthout said. Contestants get onstage, lift their kilts just enough to submit their prominent patellas for a close examination, and at the end, the person with the knobbiest knees is named the winner. “We have one judge, and she gets the biggest kick out of doing it.”

The games were the brainchild of Lucile Robertson, the great-granddaughter of E.S.C. Robertson, who founded Salado in 1859. He also established Salado College, one of the first non-denominational, co-education colleges in the area, which closed in 1885 after multiple fires. One hundred years later, Lucile built the Central Texas Area Museum—now the Salado Museum and College Park—to preserve the town’s history. And in 1961, she started hosting an annual Scottish Gathering and Highland Games to honor her family’s heritage.

“She started right from scratch,” Swarthout says. Lucile reached out to various Scottish clans across the United States to invite them to the games; by all accounts, even the early events were a great success, with 40 clans and over 1,000 people attending the first gathering in 1961.

The games have exploded in popularity over the past few years, both in terms of the number of visitors and the number of athletes. Swarthout credits this in part to more active marketing on the part of the board that runs the event; he himself has joined a number of Scottish clan Facebook groups, where he’s been posting about the gathering. On the games’ 60th anniversary in 2021, over 4,000 visitors flocked to Salado, where the population is roughly 2,300, to spend a weekend eating Scottish food, drinking Scottish whiskey, and watching over 75 competitors in tartan kilts throw heavy objects.

According to Swarthout, the average age of athletes at the Highland Games has been trending younger in recent years. Previously, he estimated the average age of athletes to be around 40. Now, he puts it closer to 20, a shift he attributes to the rise in the popularity of strength training and functional fitness classes, like CrossFit. “Young guys, especially those that are into weightlifting, have really gravitated toward this sport,” Swarthout observed. Women compete too, he added, though not nearly as many as the men.

None of the athletes thus far have been from Salado itself. They come from around Texas and the U.S. to compete. Some are members of clubs that train in traditional Scottish sports, like the Texas Celtic Athletic Association, who travel to competitions around the country.

Others, Swarthout suspects, are simply ultra-strong individuals who want to try their hand at flipping a telephone pole or throwing a heavy stone as far as they can.

“I think it’s primarily word-of-mouth,” Swarthout said of the growing interest in the games. “If my friend Joe says, ‘Hey, I can throw the shot-put farther than you,’ and I say, ‘No you can’t,’ it just kind of builds from there.”

Salado Creek is guarded by a sculpture of a doomed mermaid, whose tears are said to feed its waters today.
Sponsored by Visit Salado
Video