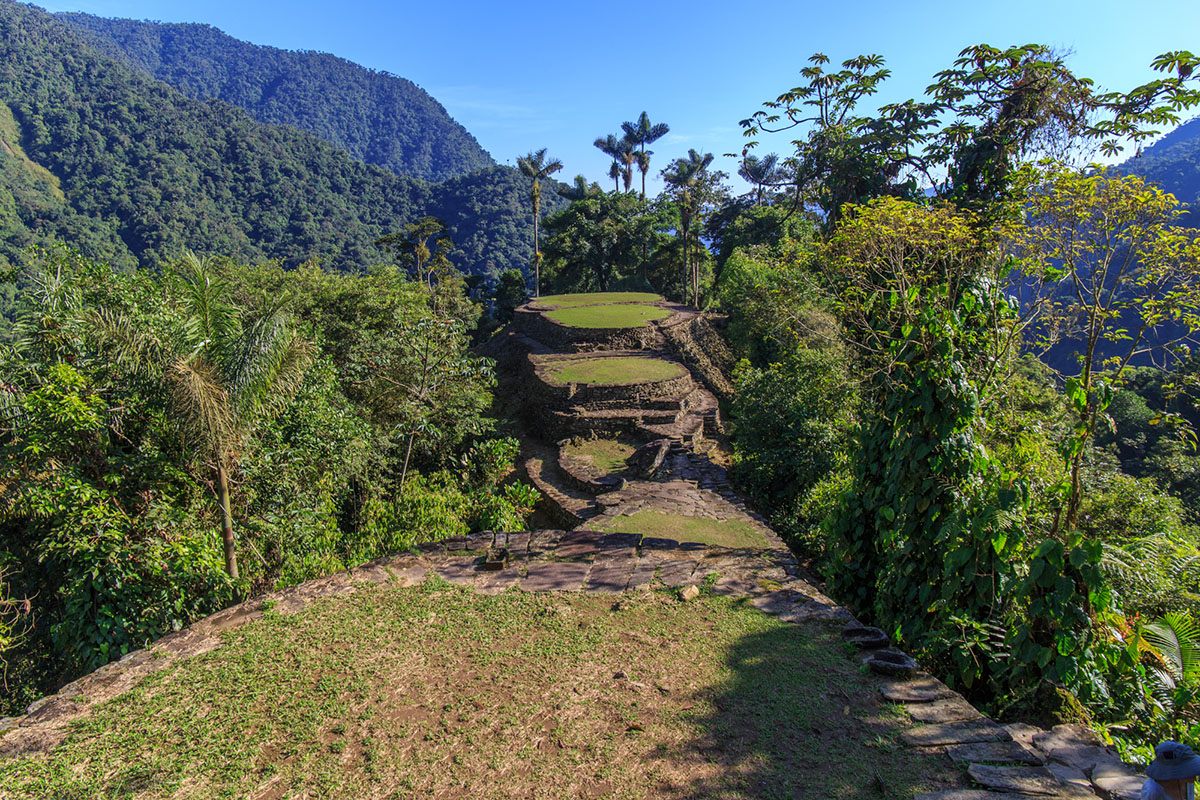 The panorama of the Lost City. The round clearings, where houses once sat, extend down the sides of the mountains. Many believe that only a small portion of the Lost City has been excavated at this point. All Photos: Gena Steffens
In This Story
Destination Guide

In the early 1970s, a group of looters searching for Pre-Columbian artifacts in the jungles of Colombia’s Sierra Nevada de Santa Marta stumbled upon a set of worn stone steps leading up a ridge from the shore of the Buritaca river. At the end of more than 1,200 stairs, they found the ruins of an ancient, silent, abandoned city.

Shortly afterwards, a slew of exquisite artifacts began to flood Colombia’s black market, leaving archaeologists of the era puzzled as to the origins of such intricate golden figurines, urns, beads and statues.

Investigators soon caught on to the trail left by grave robbers. The region, which had been dubbed “Green Hell” by the looters, seemed impossibly difficult. Between the impenetrable tropical forest, the steep, treacherous gradations slicked by constant downpours, and clouds of disease-bearing mosquitoes, progress was slow. But by 1975, excavations were underway, and the site was shortly thereafter revealed to the world as Ciudad Perdida, or the “Lost City”.

What the archaeologists had uncovered was incredible, one of the most important archaeological discoveries of the century—a massive city, once home to some 2,000-8,000 inhabitants.

Perhaps most remarkable about Ciudad Perdida is the fact that it was built some 650 years before Machu Picchu, around 800 CE. Though only a small portion of the site has been excavated, the city is an impressive feat of engineering, built along a steep mountain ridge nearly a mile above sea level. A complex network of stone bridges and drainage systems has maintained the city throughout the test of time.

The site is believed to have been the seat of power of the Tairona kingdom, which spanned throughout the Sierra Nevada and the northern region of Colombia. A testament to the stability of the society that constructed it, the Lost City was constantly inhabited from its construction up until its abandonment, which likely took place in the 16th century amid the arrival of Spanish conquistadores. During this period of contact and conflict, portions of the Tairona people moved further into the reaches of the Sierra Nevada de Santa Marta, which allowed them to avoid the worst of Spanish colonialism of the 17th and 18th centuries.

Despite its name, the Lost City was never really lost, at least not to the descendants of the Tairona people who still occupy the region, today known as the Wiwa, Kogi, Arhuaco and Kankuamo. Though their ancestors abandoned the city centuries ago, the indigenous of the Sierra Nevada de Santa Marta never forgot about it. When the site was “discovered” in the ’70s, indigenous leaders quietly asserted that they knew of the city’s existence all along. In fact, they had never stopped visiting the site, known to them as Teyuna, over the centuries. They simply had always been careful to keep its location a secret from outsiders in order to avoid precisely what happened after the looters found the city.

Today, after several years of closure in the early 2000s due to the kidnapping of foreign tourists visiting the Lost City during the height of Colombia’s armed conflict, the site is once again open to individuals interested in experiencing what can only be described as one of the greatest adventures in South America.

While Machu Picchu is accessible to just about anyone, only the most dedicated (and physically capable) of adventurers can visit the Lost City, which to this day is only accessible by a 27-mile hike through the same “Green Hell” experienced by those who uncovered the Sierra’s secrets.

The difficulty of the terrain is also part of what has provided protection to the descendants of the Tairona people, who believe the Sierra Nevada de Santa Marta to be the center of the universe, and consider themselves to be the “Elder Brothers,” responsible for non-Tairona people, the “Younger Brothers,” from destroying the equilibrium of the natural world. Despite thousands of years of constant occupation, the Sierra Nevada continues to be one of the most ecologically intact and biodiverse places on the planet, thanks to the resistance of indigenous groups to those wishing to intrude into the region.

I visited the Lost City with a guide from Wiwa Tours, one of the five tour operators that have permission to lead tourists to the Lost City, and the only one that is operated by the region’s original inhabitants. My guide, Miguel, though barely 16 years old, had the demeanor of a wise elderly man. He walked barefoot in a traditional white tunic, carrying only a small woven shoulder bag, and barely speaking a word over the four days that he led us through the forest.

Watching small groups of tourists flail along the muddied paths, disrupting the great silence of the forest, I asked Miguel why his people allow visitors to the site. He explained that he and his community want people to understand and respect the culture of the descendants of the Tairona, and the only way to do that is to allow people to experience it first-hand.

Visiting the Lost City on the heels of a person who is likely a great-great-great-great-great grandson of someone who inhabited the site before its abandonment drove home the cultural value of Teyuna. But it also raised the question of sustainability in an age where tourism is a viable economic alternative in a country once largely controlled by illegal armed groups and powered by coca cultivation. How the place will change over the years under the never-ending flow of tourists is anyone’s guess. What seems most important, however, aside from preventing the degradation of the region’s ecology, is respecting those who have preserved it up until now.

Life is more fun under the stars, anyway.
visualarchaeology

Farmers and foragers set up at sunset to sell hundreds of species valued in traditional medicine and ritual.
politics

Perhaps fiercest of all was Manuela Sáenz—spy, archivist, prankster, and companion of Simón Bolívar.
libraries