It Takes a Lot of Thought and Planning to Paint a Train - Atlas Obscura
Want to see fewer ads? Become a Member. 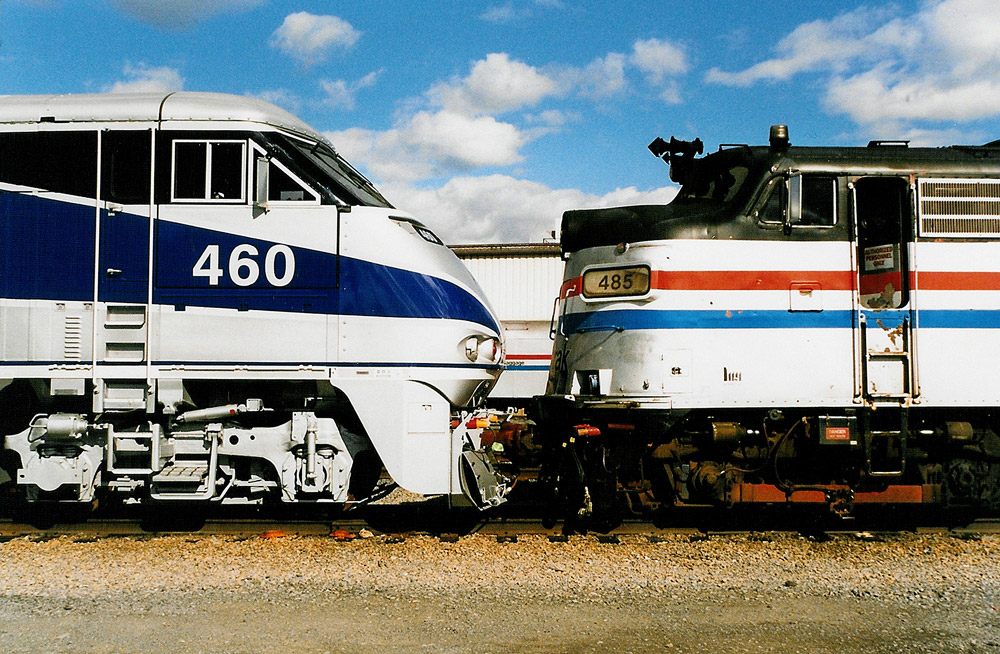 In the spring of 1971, the American passenger train was dying.

Since their creation around a century and a half earlier, railroads had been a primary mover of both freight and passengers. But with the advent of the American highway system and the advancement of air travel, fewer people were riding the rails, and the railroads were losing money. The government wouldn’t let the privately owned companies just drop passenger service, so Congress came up with a solution: a quasi-public entity called the National Railroad Passenger Corporation, better known as Amtrak.

Amtrak eventually took over intercity passenger rail service from 20 different private railroads to cobble together a national system. At the time, many people thought this was just delaying the inevitable end of passenger rail service, and that the whole thing would fail within a few years. As part of the deal, Amtrak also acquired a fleet of dilapidated locomotives and passenger cars to support the service. The equipment came in a rainbow of colors from railroads with names such as Penn Central, Great Northern, and Santa Fe. At the time, painting any of it was the last thing on anyone’s mind.

For railroad enthusiasts, the arrival of Amtrak was a mixed blessing. On the plus side, at least some of the passenger trains they loved would survive, but on the flip side, the arrival of a unified system meant that many of the unique paint schemes and brands that attracted them to railroads in the first place—the Santa Fe’s red-and-silver “Warbonnet” scheme or Great Northern’s “Big Sky Blue”—would fade into history. For many fans, spotting or photographing the many different paint schemes was an important part of their hobby. Amtrak had this on its mind, too.

Shortly before Amtrak’s debut on May 1, 1971, the company decided to paint at least one locomotive for an opening day press event. Locomotive No. 4316 was selected to receive a quick, one-of-a-kind paint job: black with blue and white stripes on the front and the Amtrak logo, known as the “Pointless Arrow,” on the side. It wasn’t much, but it was something, says Matt Donnelly, lead brand communications specialist for Amtrak.

“The big focus was on getting the railroad up and running,” he says. “There just wasn’t a lot of time to create the brand image.”

Despite the early low expectations, Amtrak has survived to its 50th anniversary in 2021, and it’s had plenty of time to figure out how to paint its locomotives and rolling stock. Donnelly is a member of the team that helps design the railroad’s paint schemes and is something of an expert on the brand history. Since 1971, Amtrak has had at least six different paint schemes for its locomotives and cars, although there have been dozens of variations of each to fit the different shapes and sizes of vehicles. Donnelly says designing something that can fit multiple types of equipment—from a high-speed locomotive to a baggage car—is actually one of the biggest challenges of creating a paint scheme, a process that can take months or even years and require input from numerous stakeholders.

Amtrak’s first official paint scheme came in 1972, with the introduction of what railroad enthusiasts called the “Bloody Nose.” The front of the locomotives was red, to make it more visible to pedestrians and drivers, and the sides were black and silver. Donnelly says it took Amtrak years to get its equipment into a unified scheme, and even then there would be little variations on a single train because of the type of equipment or where it had been painted. Some cars had windows that were bigger than others and some shops had different techniques for applying logos and stripes. And this variation is one of the biggest problems with painting a train, Donnelly says.

“Airlines have it easier because the plane is a stand-alone vehicle,” he says. “But a train is made up of different pieces of equipment coupled together, and they’re mixed around often.”

Designing a paint scheme for a locomotive that can seamlessly match up with different types of cars is key. It also needs to look right from a distance, as a train rolls across the landscape, and up close for the passenger standing next to it at a station. The paint also has to stand up to the rigors of traveling thousands of miles back and forth across the country. Donnelly says that while Amtrak tries to keep its equipment clean, moving passengers is the primary goal, and that sometimes means going a long time between visits to the train version of a car wash (what the railroad calls a “wash rack”). To deal with that, designers try to figure out what parts of a locomotive accumulate the most dirt, and then use darker paints to mask those areas. That’s why the roof and the areas around the wheels are often black or gray. Another factor is what manufacturers provide; if a part only comes in one color (usually something neutral like gray) it ought to be incorporated like that into the final scheme for ease of maintenance.

“It’s not just like creating a piece of art,” Donnelly says. “A locomotive or passenger car is a functioning tool.”

Over the last few years, Donnelly and others have been designing a new scheme, dubbed “Phase VII,” that will premiere later in 2021. Although it will take some time, eventually the red, white, and blue scheme will become the new standard.

Before applying any paint to a locomotive or piece of rolling stock, designers create numerous 3D renderings, though they still may need to make changes once the first one rolls out of the paint shop. What doesn’t change, though, is the excitement of seeing a freshly painted train rolling down the tracks, Donnelly says.

“When you finally get to see a livery that you designed on a piece of equipment, it’s a little surreal. In some cases you have put years of thought and effort into making that livery a reality, so to finally see it in person is a wonderful culmination of the team’s effort,” he says. “It’s almost like when you’re a kid and you get the toy you’ve been wanting. Remember when you’d have a catalog and circle what you wanted? You’ve seen images of that toy, but when you finally experience it in person it’s exciting and real.”

While most of Amtrak’s equipment will eventually be wearing the new standard paint scheme, at least one locomotive will stand out from the rest. To mark the 50th anniversary, Amtrak is painting one of its newest ones like the black and blue No. 4316, the locomotive that received the last-minute paint job back in 1971. It’ll be a subtle nod to 50 years of more considered design work.

A new book collects 33 routes that went off the rails.
railroads

No Trains Required to Ride the Rails

Beneath the streets of London, a secret subway for snail mail.
Video