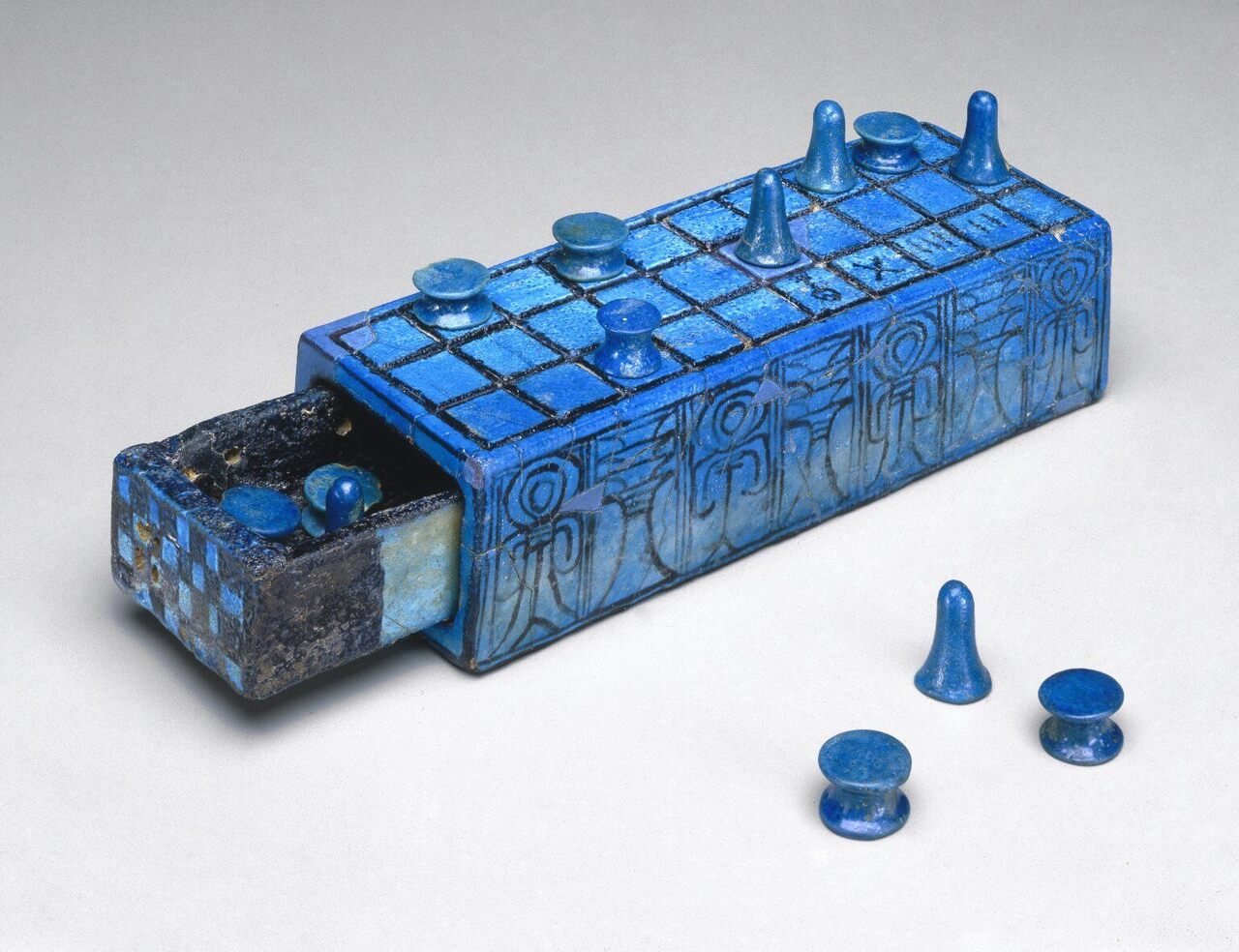 An ancient senet board inscribed with the name of Amenhotep III, with a sliding compartment for pieces, dating to the 14th century B.C. Public Domain

Games are a serious matter, and they have been for thousands of years. Fun is fun, but games need rules. Before the dawn of proprietary games—the ones in boxes—most board games didn’t come with instructions, though. The rules were passed on orally, and that’s one of the reasons that ancient games still played today, such as mancala or backgammon, have murky origins. Now, an interdisciplinary team of software engineers, game historians, and archaeologists is attempting to piece together the lineage and rules of ancient board games—with modern technology.

Board games are one of the oldest documented forms of leisure. It is hard to tell when hide-and-seek or chopsticks came along, because they don’t leave any material evidence, but game boards and playing tokens have given archaeologists a lot to work with. They were etched on the landscape, left or lost in habitation sites, and even buried with the dead (for playing in the afterlife). They occur all over the world, from Viking hnefatafl to Chinese liubo to a mancala variant in Borneo, and involve a range of boards, dice, and pieces. And games spanned social divisions, from the general public, some of whom played on game boards incised into surfaces in temples, to ancient royalty, who had suitably luxurious game paraphernalia.

“Tutankhamun had four senet sets in his tomb,” says Cameron Browne, a computer scientist at Maastricht University, referring to an ancient Egyptian game about the passage to the afterlife. Browne is the head of the Digital Ludeme Project (lude from the Latin, “to play”), which is using archaeological evidence and modern game rules to figure out how hundreds of ancient games and their variants were played, and changed over time and by location.

As far as the archaeological record goes, board gaming began with senet, nearly 1,800 years before Tut was even born. About 700 years later, in ancient Sumer, the Royal Game of Ur was important enough that its rules were written down—actually incised on a cuneiform tablet. (Otherwise, rules were almost never set in stone.) The names of many ancient games have slipped through the cracks of history, so researchers identify them by what remains. There’s “33 Circles” from Egypt, “10-Ring” from Bronze Age Crete, and the Middle Eastern “58 Holes.” Since the rules have been lost over time, the way many ancient games were played is based on speculation. With so many games, and so many variations, Browne’s work isn’t merely an archaeological-meets-ludological project. It’s genealogical, too.

“We’re really dealing with families of games,” Browne says. “The mancala games, the chess-like games, the tafl games, card games. Each of these probably have their own distinct family.”

Like the humans that invented them, games evolved over time. Board sizes have changed, pieces have shifted shape, and rules have mutated as games have been passed along and slowly fanned out across the map.

“The Silk Road is a perfect example” for how the games spread, Browne says. “Many of these games started in the Fertile Crescent and progressed through Europe and Asia.”

And as they spread they left behind a convoluted lineage of adaptions and local flavor. For example, according to Ulrich Schädler, a games historian at the Swiss Museum of the Game and an editor of the journal Board Game Studies, the aristocrats at Versailles in the 17th century played a languid form of trictrac, a backgammon variant. When the game got to the banking Brits across the channel, with a sense of “economy of time,” it was compressed into 15-minute bouts.

This all adds up to a complex, poorly documented, and global family tree, and that makes defining any given, long-forgotten rule set a challenge. Games changed hands across cultures, over the course of millennia. Many games fell out of style, disappeared altogether, or evolved into something unrecognizable. The archaeological record is fragmentary at best, and game compendia—such as Alfonso X of Castile’s 1284 Libro de los Juegos—are few and far between. What games did leave, in some cases, were boards and spare pieces, which in turn has led to a lot of guesswork among amateurs, enthusiasts, and interested insiders. The same Howard Carter and Lord Carnarvon who opened Tut’s tomb proposed what is now a common play style for 58 Holes. Modern game experts can only pick up the pieces.

“Lost rules are made in a very superficial way by people who don’t really know games. From archaeologists, philologists, I’ve read so many,” Schädler says. “They’re made up by people who have never played a game, or don’t know their mechanics very well.” Bringing some order to this complicated history might take something more than speculation.

At the Fourth Annual Board Game Symposium in New York in September 2019, Walter Crist, an anthropologist with the Digital Ludeme Project, briefly described how their project is dealing with this—by going from “we can’t know what the rules of the game are” to figuring out what the rules must have been, using artificial intelligence.

To do this, the researchers model each game using “ludemes” (literally, “game memes”) to digitally reconstruct the games based on their fundamental conceptual information. The ludeme idea breaks down the game’s form—its physical components and any known rule set—and separates it from function, or how those components are employed in reality. Ludemes are game genes, and once the genetic information is mapped, the Digital Ludeme Project can calculate the “ludemic distance” between games, or the number of steps necessary for one game to evolve into another. The ludeme concept makes all game information more manageable pieces of a much larger puzzle. By adding or removing any one component, a game might be a step closer to another one, and then with historical and archaeological data, the researchers can tell whether one game borrowed from another. Then, in a crucial step, the ludemes are loaded into a game system made specially for the project—LUDII game software—and the computers go to work by playing every game thousands upon thousands of times in different variations.

In a game of Boggle—proprietary, invented in 1972—players shake an enclosed box of 16 cubes, each inscribed with a different letter on each side. Once the cubes settle, players try and make as many words as they can by connecting the face-up letters. This is precisely what the LUDII software is doing, with game simulations in the place of letters, and functional games in the place of words.

Schädler has long worked on reconstructing ancient games without the assistance of artificial intelligence, and says that to find out if a set of rules works, you need to play it a lot of times to find glitches where the rules break down and leave the game unplayable, unevenly matched, or impossible to win. A veteran of many, many of these playthroughs, Schädler is excited about the Digital Ludeme Project.

“If we have a large number of ludemes, elements that make up a rule set, we can perhaps see that certain ludemes go together,” he says. “You can simply let the computer play 10,000 times and this will give you a result as to whether or not these rules work.”

With so many ludemes involved with each game, “what would have taken a lifetime of playtesting can be done in hours,” says Eddie Duggan, a games historian at the University of Suffolk. “Once the game has been programmed using the LUDII game system to model, play, and analyze the games, it will be possible to determine a game’s ‘interestingness’ or game quality.” The more test runs a given game gets in the machine learning system, the better the Digital Ludeme Project team can understand how the game would most optimally operate.

“Our reconstructions will also, crucially, provide confidence scores for our reconstructions,” says Crist, the team’s anthropologist, “to communicate our conclusions about the likelihood that these rule sets could reflect the reality of the past.”

The game family tree operates like an evolutionary tree, and can be tracked through a method called computational phylogenetics. After each game is “boggled,” and thousands of different rule sets are tested, the Digital Ludeme Project determines how the game fits in with others, and can track their changes like in a game of telephone. Between points A and B, Duggan notes, there are many small steps, so the project provides opportunities to both interpolate new games and optimize existing ones.

“As well as revealing something about ancient games,” he says, “it is likely that new games will be discovered that were not known or played in the ancient world.”

The Digital Ludeme Project’s ultimate goal is to make hundreds of reconstructed and optimized ancient games available online for everyone to learn about and enjoy.

“Games without rules—play—is something all animals do,” says Duggan. “But one day somebody used a stick to scratch a line in the dirt and started to arrange pebbles or seeds along the line according to rules and invented a game. That is when we became human.”

As the project continues, Browne says they’ll pay special mind to quality and historical authenticity. The compendium of fun is set to officially publish in January 2020, though some of the games are playable now. To, Duggan it all illustrates our collective adaptability—when applied to the task of fun.

“Whether we are modern board game players, Vikings, ancient Romans, ancient Egyptians, ancient Babylonians,” he says, “we are all Homo ludens, the species that plays games.”

What’s the oldest game you’ve ever played? Let us know, and share any other thoughts and feelings you might have about the story in the Atlas Obscura Community Forums!

This Ancient Egyptian Textile Is Hanging By a Thread

It also set in motion the process that made the vast territory part of America.
ancient technology

And how instability, climate, and neglect drove their slow collapse.
sports

Hiding in plain sight, the first Hampden Park is ready to reclaim its fame.
Video • Wonder From Home

A wooden fish could help linguists learn more about the writing system known as rongorongo.
Read more
Thanks for sharing!