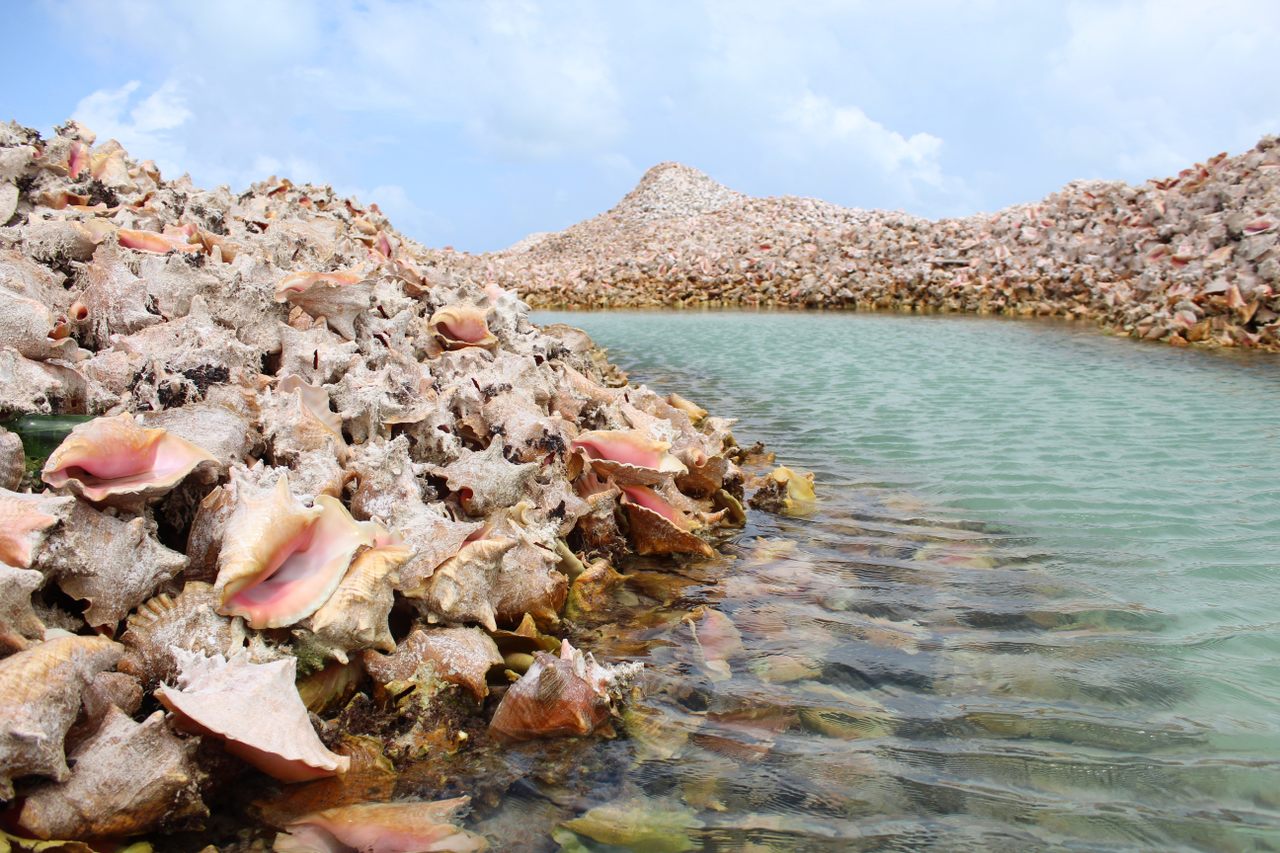 Piles of conch shells in the water off the coral island of Anegada in the British Virgin Islands. Fianna Fluess / Shutterstock
In This Story
Place

A mountain of conch shells created by centuries of fishermen.
Destination Guide

Two fishermen from the coral island of Anegada sit in a metal boat. They divest conch of their shells, limb by limb, tentacle by tentacle, until at last each holds a smooth, white mass of meat. When they finish, they toss the shells—shiny and polished pink by the sand—behind them, to join thousands of their departed brothers and sisters in a series of jagged dunes, towering a dozen feet above their heads.

In the British Virgin Islands, the humble conch, a type of sea snail, is rivaled only by lobster as the seafood of choice. Conch fritters—the rubbery, almost gamey-tasting meat chopped fine, breaded and deep-fried, and doused in a ketchup-mayo sauce—appear on the menu of virtually every restaurant serving up local cuisine, and in the galley kitchens of the hundreds of charter boats cruising the waters. The creature is a staple elsewhere in the Caribbean, too. But in the BVI, every conch on every dinner plate is harvested locally, mostly in the waters surrounding Anegada. Some say the piles of discarded conch shells reaching up from the seafloor and looming high out of the water could be one reason why the mollusks remain so plentiful here, after being overfished to the point of extinction elsewhere. But the shells don’t attract the living conch—they actually repel them.

For generations, explains local fisherman Kelwyn “Kelly” Faulkner Lindsay, locals—first, indigenous peoples on seasonal hunts, then British settlers—would dive the seabeds, sawing off the tops of the shells and drawing out the creatures’ innards like beads on a string. As far back as the 13th century, fishermen would toss the empty shells down into the seabed, around 30 to 40 feet below. As the older shells sank into the sand, newer shells were tossed on top, keeping the height level. Over the next 800 years, the piles gradually evolved into one of the world’s most serene and beautiful garbage dumps.

This massive buildup of conch, according to Faulkner Lindsay, influenced the movements of the living conch. “The ones that are alive will start to move away from the empty shells,” he says. “So…we put all the shells in one place.” With the empty shells piled in one small area instead of scattered throughout the larger fishing grounds, the conch will think there’s no danger and remain comfortably dwelling in Anegada, instead of fleeing the island’s waters forever.

The theory is unproven, but some scientists think it has merit. “There is some indication, mostly anecdotal I think, that dead conch will repel live ones,” says Clive Petrovic, a biology professor at Tortola’s H. Lavity Stoutt Community College. Possibly because in nature live conch are usually killed by predators. Thus, it would confer survival advantage to live conch to leave an area that may contain a predator.” All the while, schools of nurse sharks, stingrays and turtles dart around the shells, hatching their young in the shadow of the dead.

“It acts as a nursery and a reef,” Faulkner Lindsay says.

The conch-shell piles may have existed for centuries, but a decade ago they were little-known, and inaccessible to all but local fishermen, who saw no good reason to tell anyone they were there. In 2012, Faulkner Lindsay, fisherman-turned-tour guide, saw an untapped business opportunity that would allow him to show visitors the mounds in one of the least invasive ways possible. He bought a small boat to send tourists skimming over the almost eerily empty turquoise expanse of water leading to the mounds.

The big charter catamarans that dominate the VI tourism industry don’t come here—in fact, they can’t come here. Local law forbids it, mostly because navigating over the BVI’s largest reef would be too dangerous for many of the amateur “credit card captains” who rent out the cats. It’s only here that visitors glimpse what the BVI looked like before Christopher Columbus arrived on his second voyage to the Americas, according to BVI-based historian Mitch Kent, and it’s only the vast piles of shells that prove that people called the Virgin Islands home long before him.

“These dates suggest that the middens were formed during the last stages of the Amerindian occupation of the Leeward Islands, which for the Virgin Islands ended in the mid-16th century when a concerted effort was made to clear the region of its indigenous inhabitants,” Kent wrote in his environmental profile of the island for the Island Resources Foundation. One early speculation, put forth by 19th-century German explorer Robert Hermann Schomburgk, was that the mounds were monuments to the dead. Anegadeans do still make references to the “Indian burial grounds” on their island, but Schomburgk also noted that locals regularly burned the shells for lime, and no bones were uncovered in the piles.

Though a few old-school islanders are still suspicious of visitors, tourism is undoubtedly king now on Anegada (population 300). Most fishermen now have part-time jobs as cooks or handymen at the handful of boutique resorts on Anegada, says Faulkner Lindsay. As a result, the mounds have evolved to not only serve as a place to dispose of the shells, but a temporary spot for fishermen to store the live conch they catch. Drifting toward one micro-pile, Faulkner Lindsay explained that it belongs to the fisherman who supplies Neptune’s Treasure, one of the restaurants near the ferry dock. Other piles belong to different fishermen and restaurants. They dump off their fresh catches in individual hoards until they have time to come back and clean them. The piles work on a sort of honor system. “You know that that’s not yours,” Lindsay says.

Fishing remains knitted into the landscape of Anegada the way it isn’t in the rest of the BVI. Anegada fishermen provide most of the territory’s lobster, according to Faulkner Lindsay, and charter guests radio hours ahead to the island’s few restaurants and hotels to request conch fritters, conch chowder, or cracked conch dredged in flour and fried golden-brown. The animal’s small numbers, and the careful approach they take to fishing, insure the populations remain stable, he says. “We can still sustain the restaurants and keep the conch alive.”

Even just a few more boats out trolling could upset the ecosystem. Other Caribbean destinations offer case studies for what not to do with conch. Although Key West bills itself as the “Conch Republic,” conch harvesting has been illegal there since 1975. A recent report from the Bahamas said the population there could collapse in 15 years if current fishing practices continue.

“Conch are widespread in the BVI,” says Petrovic. “In the past, part of the challenge for fishers [has been] getting the conch to market. Since much of the market was local, and the human population was generally small, there was less incentive to overfish.”

Here, some of the catch gets exported abroad in small quantities. On Anegada, buyers tend to form closer connections with their suppliers. One restaurateur from Miami has been buying Anegada conch for decades, explains Faulkner Lindsay.

“He owned two restaurants and he came here for vacation,” he says. “He lined up with a fisherman to buy 500 pounds.”

Petrovic, though, can see trouble ahead. Anegada’s big sisters have seen conch steadily declining due to overfishing. “While conch still exist, and in good numbers in a few places, overall the populations are not near historical levels,” he says. This could be due to overharvesting of juvenile breeding conch—which, providentially, can be identified by their shells. “The shell size and shape provides clues to the age of the conch,” says Petrovic, and could help reconstruct the condition of ancient populations.

Scientific research could crack open more mysteries. According to Gore, due to ocean acidification resulting from climate change, conch are suspected not to be growing as large as they used to. An 800-year-old conch pile could prove invaluable in determining just how much they’re shrinking, serving as “a key concept to natural resource management—using scientific fact, not opinions, to make decisions to better protect any such resources. In some ways, unravelling some of the history…would actually help us understand the past to better prepare for the future.” In other words, we may not know how best to save the conch—which have historically been nearly as inaccessible to scientists as they have been to tourists—until their graveyard gives up more of its secrets.

The Short Life and Strange Death of Maryland's Ghost Fleet

The Scientist Bringing Fresh Fish Back to Philadelphia's Underserved Neighborhoods

Italian chefs are teaming up with scientists to fry, sauté, and pickle the creatures into the food of the future.
food