The Secrets Hiding in the Simplest Animal Brains - Atlas Obscura 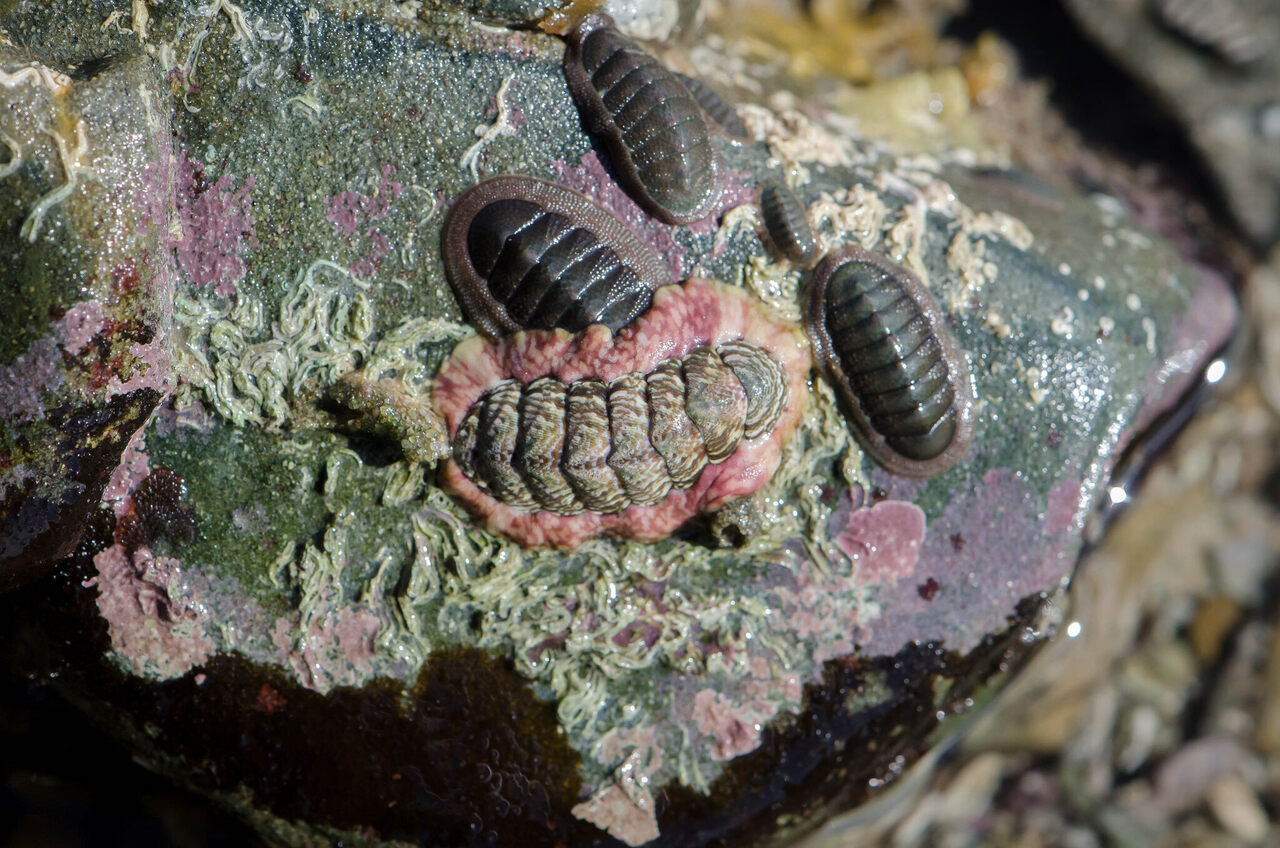 Do chitons have brains? What is a brain, anyway? Dilettantiquity/CC by 2.0

With eight separate, flexible plates of shell held together by a skirt of muscle called a girdle, chitons look a bit like armored pebbles, ready for battle. The marine mollusks aren’t actually suited for action. They spend most of their time stuck in place, suctioned to rocks in the intertidal zone. While they’re clinging, their radula, a sort of tongue barbed with scores of sharp “teeth,” scrapes algae and other food from the surface. For chitons, that’s about as exciting as it gets.

They might seem simple, uncomplicated, even boring, but Lauren Sumner-Rooney, an evolutionary biologist at the Oxford University Museum of Natural History, thinks that reputation is a little unfair. “Even things that we’ve considered very, very simple,” she says, “may have a lot more going on.”

Sumner-Rooney roots for underdogs. She’s fascinated, for instance, by Astyanax mexicanus, a cave-dwelling tetra fish that evolved without eyes, and cave salamanders, whose ghostly pallor and gangly limbs are adapted to a lightless life. Her work focuses on brain structure in poorly understood animals such as chitons or tusk shells, which use tentacle-like organs called captacula to assist in gathering food.

Growing up around science—two grandparents were chemists, and her mother taught her basic concepts of genetic inheritance by tracking the colors of their chickens—Sumner-Rooney couldn’t decide whether she wanted to be an astronaut or a biologist. She had a thing for the weird and unfamiliar, but in the end, 20,000 Leagues Under the Sea won out over 2001: A Space Odyssey. Sumner-Rooney embarked on a career trying to understand how animals perceive their world—worlds that can be just as alien, to most people, as a distant planet.

In a new paper newly published online in the Journal of Morphology, Sumner-Rooney and coauthor Julia Sigwart, of Queen’s University Marine Laboratory in Northern Ireland, make the case that chitons haven’t received their due.

Chitons don’t have anything we’d generally consider to be heads, and it’s long been thought they don’t have brains, either, and instead sport a rudimentary, ladder-like nerve network. Sumner-Rooney and Sigwart argue in their paper that chitons aren’t really brainless, but rather have a brain that defies our expectations and understanding.

When humans think of brains, we think of our own—two hemispheres, dizzy with coils, a pinky-beige helmet snugly ensconced in a skull. But brains in a lot of other creatures aren’t just scaled-down versions of ours.

Across species, the morphological differences between brains are vast and numerous—so much so that, in 2010, Stefan Richter, a biologist at Universität Rostock, and a slew of colleagues set out to codify a shared vocabulary for describing exactly what a brain is and isn’t. They laid out a working definition of “brain”—along with 46 other terms used to describe parts of invertebrates’ nervous systems—in a neuroanatomical glossary in the journal Frontiers in Zoology.

They defined a brain as a particular, distinctive cluster of neurons—specifically, “the most prominent anterior condensation of neurons.” Sumner-Rooney relies on this definition in her work, but she acknowledges, as Richter and company also note, that this umbrella leaves some species out in the rain—including a few generally thought to be capable of sophisticated tasks.

Animals with radial symmetry, such as jellyfish and sea urchins, don’t have a front or a rear, so there’s no place to put an “anterior [front] condensation” of neurons. But somehow they still manage to coordinate muscle movement and process sensory information coming in from across their bodies. “They pose quite a problem for very classical definitions, but they’re clearly very capable of complex tasks that we would usually attribute to a brain,” Sumner-Rooney says. Such a brain, she adds, “doesn’t quite fit with the image we have in our heads.”

In the case of a chiton, there is a dense concentration of nerve tissue inside what’s known as the circumesophageal nerve ring, a flattened cord around the top of the esophagus. If a chiton does have a brain, Sumner-Rooney reasons, the nerve ring might be the place to find it.

Sumner-Rooney, who scouts flea markets for old illustrations from biology books, was excited to get her hands on nearly 3,700 slides of histological sections of chiton parts from Berlin’s Natural History Museum, made in the late 1800s and early 1900s by researcher Johannes Thiele. For one thing, they are beautiful. Each specimen is stained a brilliant pink, and each slide is hand-labeled with a swoopy, elegant script. The slides cover a range of chiton species, so she thought they would allow her to look at neuroanatomy across different varieties. (They consulted a bit of newer material, too, to account for what was missing from Thiele’s collection.) Then, as she and her team digitized the slides, they began examining the nerve ring in light of Richter’s definition of a brain.

More than a century ago, at least one researcher had hinted that the ring might be divided into parts that corresponded to major nerve cords. Even then the observation was buried deep in footnotes, and in the decades since, Sumner-Rooney says, it slipped into what she calls “dormant knowledge.” With the exception of a very small handful of papers, it had been neglected, as researchers focused on cephalopods and gastropods. Most scientific literature about chitons still describes their brains as simple, “ladder-like” structures. “I think it was largely because there aren’t big ganglionic swellings in chitons like we see in other mollusks like gastropods, bivalves, and tusk shells,” Sumner-Rooney says. Since the nerve cord is fairly consistent in width, she adds, there was an assumption that no particular area was specialized or advanced.

Much of the most in-depth anatomical work on chitons dates back decades, and the recent work that considers the architecture of the entire nervous system includes some research that’s not especially accessible—such as a thesis published 30 years ago, in German. More recently, Sumner-Rooney says, modern techniques such as 3-D imaging “are finally starting to open up our ability to look at these animals and reevaluate what we think about the nervous systems that they do have,” she says.

When Sumner-Rooney and Sigwart used these strategies, they found that the nerve ring isn’t as simple as it might appear to be. It is divided into clearly defined segments, and these are related to structures seen in other classes of mollusks. “This represents a far higher level of neural structure than is reflected in the established literature,” the authors write. “Contrary to almost all previous descriptions,” they conclude, “the size and structure of the chiton anterior nerve ring unambiguously qualify it as a true brain.”

When Sumner-Rooney tells museum visitors about mollusk brains, things quickly escalate into lofty philosophical questions. “Instantly you make this connection between, ‘Ok, if that has a brain, does it have feelings? Is it aware that it’s alive?’” she says. She finds that it’s often hard for people “to separate the notion of brains from the notion of emotion, feeling, and a sense of self.”

But she isn’t studying consciousness, to whatever extent chitons are capable of “thinking” about the currents churning around them. Instead, she’s interested in what all those neurons are doing, what they’re capable of, and why. For example, some species of chitons demonstrate homing habits; they can roam to find food, and then find their way back. Does the nerve ring help make this possible? Maybe the neural ring has some role in supporting the hundreds and hundreds of eyes, or ocelli, that stipple many species’ shells. There’s evidence that these can perceive shadows passing overhead, and that chitons clamp down on their rocks when they do. Is it an integration of information or a response driven by reflexes—similar to a human jerking a hand away from a flame?

To learn more, researchers must look deeper at structure and behavior. Sumner-Rooney hopes to do both. Other strategies could involve electrophysiology—taking measurements directly from the nerves—severing portions of the nerve ring, or inserting dye into living or freshly dead specimens to retrace the connections. “One of the beautiful things about the nervous system is that they do just work in a similar way to electrical circuits,” Sumner-Rooney says. “You should be able to disentangle them using logic.”

Meanwhile, the work is a reminder that we have to use our own brains if we want to understand another species’, and this means watching out for pitfalls, such as seeing only what we’re looking for. “The interpretation of chiton anatomy may be historically stymied by circular logic,” the authors write. “If we assume that chitons are primitive, then we see their nervous system as primitive, and the nervous systems are seen as ‘proof’” of that simplicity, they add. Instead, we could expand our own minds at the same time that we expand our definition of what a mind might be.

The mammals in Geneva’s outskirts are now iconic in the country.
invertebratesbiologyevolutionscienceanimals

Why Scientists Are Studying the Dining Habits of Manta Rays

These filter feeders might be a ray of hope amidst microplastic pollution.
science

The Many Reasons Biologists Eat Their Study Subjects

Snacking on specimens from raw monkey to bee vomit can help scientists figure stuff out.
science

The Incredibly Tricky Task of Measuring All Life on Earth

Humans make up just 0.01 percent of the biomass on the planet—the same as termites.
science

The Latest New Species Discoveries From the Greater Mekong