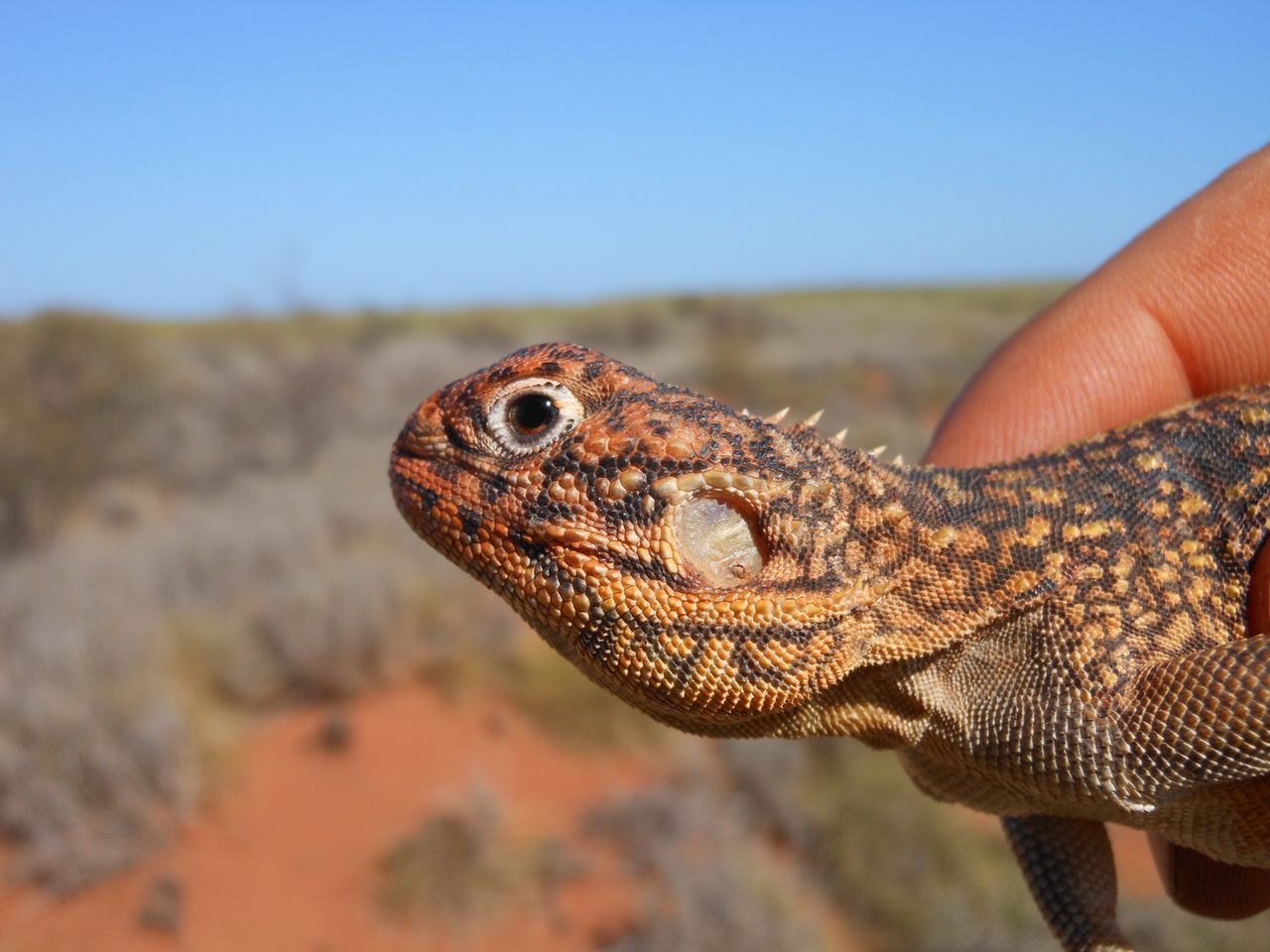 A biologist holds up a central netted dragon. Supplied by Terrestrial Ecosystems
In This Story
Destination Guide

Scott Thompson’s mission was simple, if a little ambitious. All he had to do was pick up every animal currently living on one plot of land and move them somewhere else. There were just a few obstacles. The land? Around 2,471 acres, or 3.8 square miles, of rugged Australian sand dunes. The animals? Skilled at hiding, and at times venomous.

For the past seven years, Thompson has been carrying out his mission in a remote corner of Western Australia. Located just over seven miles from the city of Onslow, the land needed to be cleared for the construction of the Chevron-operated Wheatstone Project, a liquefied natural gas plant with an annual capacity of 15 million metric tons. Chevron hired Thompson, a principal zoologist for the environmental contractor Terrestrial Ecosystems, to clear the land of all native vertebrate species before construction began, from frogs, toads, and lizards to echidnas, goannas, and quolls.

The evacuation relocated 30,000 animals and was unprecedented for any industrial site in Western Australia, Thompson says. It wasn’t just the size (huge), but also that the species relocated were, for the most part, not endangered or unusual. Thompson calls them “generic fauna.” “In Western Australia, the focus always seems to be on rare and threatened fauna,” he says.

In other words, Chevron wasn’t following environmental protection laws when carrying out this evacuation, but chose to do so out of its own accord. “This is the first time I’ve seen a company go above their regulatory obligations,” Thompson says. (Of course, that isn’t to say that the Wheatstone Project will help the environment. The plant cleared nearly 2000 acres of native vegetation, and residents of the nearby town of Oslow reported smelling its emissions, which contain toxic gases and carbon monoxide, the Australian Broadcasting Corporation reports).

Thompson and his team arrived on the scene in 2011, shortly after the project was approved. The land spans a number of biomes, including tidal mangroves, coastal sand dunes, and inland sand plains with termite mounds that are taller than humans. Terrestrial Ecosystems is often hired to measure or mitigate the environmental impact of commercial developments, so its team specializes in a range of tasks, from figuring out what animals live on the land to conspiring to catch and release them.

Thompson assumed all the larger animals living in the area, such as kangaroos and emus, would leave of their own accord after sensing the noise and influx of humans required for construction. Birds, too, were safe on their own, as they could easily fly away. So the animals they focused on were microfauna, critters too small to clear the area on their own and that would have likely died during the initial vegetation clearing.

A crew of over 50 workers converged on the site, including staff from Terrestrial Ecosystems, early career scientists, and recent college graduates looking to gain firsthand experience working with native species. The construction workers cleared out the vast majority of vegetation during the first three years, during which time most of the 30,000 animals were collected. After catching the animals, Thompson released them in various off-site locations that seemed to offer the highest probability of survival. Initially, his team tried to relocate all the animals within a 30-mile radius from the construction area, but the project surfaced so many species that his team had to go out even further afield. “We put many of them in areas recovering from fire to give them a greater chance at survival,” he says.

The majority of the species Thompson dealt with were reptiles, of which there were at least 65 species, such as lizards, bearded dragons, and goannas, Australia’s generally gargantuan carnivorous monitor lizards. They relocated more than 1,000 goannas of various sizes and species, including bungarras, also known as sand goannas. Though large, the goannas were visible, and thus fairly easy to catch in a net or trap.

They also found more than 10,000 frogs, including cocoon forming desert frogs, which can burrow several feet into the moist ground and only surface after rainfall. These frogs get their names from layered milky cocoons they form at a rate of one layer every few days. When scientists dig them up, they count the cocoon layers to know how long the frog has been buried. The frogs were harder to capture, swathed deep down in dense clay. But their burrows left small dimples in the desert, which allowed Thompson’s team to dig for each one.

The most nerve-wracking of all the species, unsurprisingly, were the venomous snakes. The team caught 60 death adders, 180 king brown snakes, and more than 220 western brown snakes—all classed within the top 20 most venomous snakes in Australia. Thompson’s crew relied on the go-to, scientifically-proven method of catching a potentially lethal snake: wear long pants, gators, and gloves, and shove it into a bag using a long hooked stick. “The stick is to encourage the snake to move into the bag but toward not the person,” Thompson says. “At least that’s the idea.”

The crew initially wanted to move, intact, all 158 termite mounds they found in the area. But in their first attempt to move one, the mound cracked like baked concrete. “By the time we’d finished, it was little more than a pile of sand,” Thompson says. “We found it wasn’t possible to relocate them in one big chunk.” Instead, the team settled for moving more than 5,000 animals dwelling inside the mounds, such as geckoes and other little pythons that feast on the bugs. Then, each mound was destroyed by hand or with the help of hand-held hammers, Thompson told the Australian Broadcasting Corporation.

The team also encountered Australia’s charming spiny anteaters, known as echidnas. “When we found echidnas, it made a real buzz in camp,” Thompson says. Though wild echidnas normally nest in big rock piles or hollow logs, area echidnas were found burrowed along roads and were easy to transport, as they would curl up into balls. They also found one northern quoll, an adorably spotted small carnivore not previously known to the area. But the rescue efforts focused only on species indigenous to Australia. Invasive species, such as feral cats and foxes and Asian house geckoes, were transported to a quarantine holding facility or euthanized on site.

Beyond their daytime relocation duties, the crew was on call 24/7 on the construction site to deal with any unwanted animal encounters. During the peak of construction, over 7,000 workers lived in the operational accommodation camps. According to Thompson, one kind of animal triggered the vast majority of complaints. “Snakes,” he says. “Snakes in the accommodation camps.” In response, a team member would swoop in and scoop it up in a hoop bag or net.

Thompson believes that animal relocation is an important first step. “Without this process in place, it’s a guaranteed death,” he says. But it’s hard to tell whether they 30,000 captured animals will survive in the long term. Some of the relocation areas might be at their carrying capacities, making it difficult for new arrivals to get the resources they need. In the future, Thompson hopes to see research tracking the survival of relocated animals, so he can improve his work.

Though Chevron did go out of its way to evacuate these animals, its footprint in Western Australia is massive. The Wheatstone plant was originally required to offset some of its carbon emissions, but that requirement was dropped after the introduction of a national carbon price in 2011, The Guardian reports. And nearby in Pilbara, Chevron’s 2016 Gorgon development—Australia’s largest natural gas plant—has accounted for half of recent increases in the country’s annual carbon dioxide emissions, according to The Guardian. (Gorgon promised the government that it would capture 80 percent of its emissions, but its carbon capture program only began this month, after a years-long delay.) The Gorgon project also recently exposed workers on Barrow Island to toxic chemicals, according to The Sydney Morning Herald.

Still, Thompson says, in the area of conservation, Chevron set a helpful precedent by relocating animals that aren’t specifically protected by law. “We want other companies to step up to the plate,” Thompson says. “And for the regulatory agencies in government to put conditions in place to ensure this becomes a more common method used in conservation strategy.”

The dusty, rusty site in eastern Wyoming is a rare relic of the 20th-century petroleum boom.
science

There are far fewer northern bettongs than previously thought, but work is underway to save the species.
roadside attractions

Iron-rich springs generate intense color in a stark landscape that, from above, might be mistaken for a crime scene.
Video • Object of Intrigue