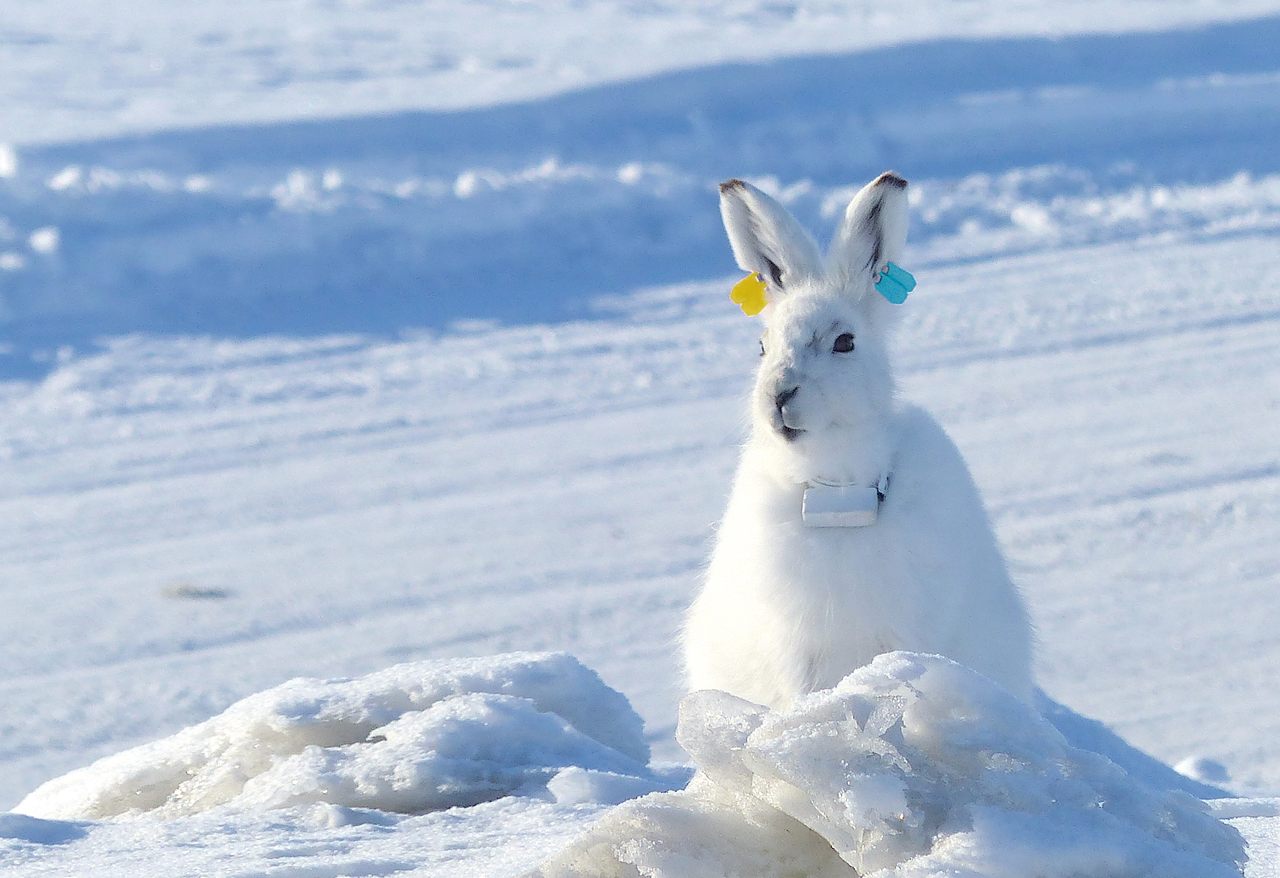 The Arctic hare BBYY traveled more than 240 miles during a seven-week period in 2019. Charline Couchoux
In This Story
Place

The third-largest island in Canada is one of the remotest places on Earth.
Destination Guide

The polar desert of Ellesmere Island’s northeast corner knows only two colors: frozen winter white and the dull brown of a short summer. There, at the world’s northernmost wildlife research station, run out of the Canadian Forces Station Alert military base, scientists embarked on an unprecedented project. It began with an adorably fluffy, brilliantly white Arctic hare.

Researchers who tagged animals in 2018, and fitted some with tracking collars the following year, refer to the hares by the color scheme of their ear tags. The one called BBYY (blue-blue, yellow-yellow) was the first Arctic hare (Lepus arcticus) tagged using the four-color system, and also the very first tagged by wildlife biologist Sandra Lai, of the Université du Québec à Rimouski. Lai had previously done research on Arctic foxes, but had come to Alert with colleagues to track, for the first time ever, the movements of individual Arctic hares. Nearly four years later, Lai still grins recalling her first meeting with BBYY. “She is very special to me,” Lai says.

BBYY would prove special to science, as well. Before BBYY, researchers estimated the maximum distance hares and related animals ever traveled was less than 22 miles. BBYY, however, covered more than 240 miles in one 49-day period, shattering previous distance records, as described in a recent paper in Ecology. This long-haul hop-a-thon hints at how Arctic hares adapted to their extreme environment, and also raises several new lines of scientific inquiry.

“When I started studying Arctic hares, I was not expecting them to move at all, and now we have a potentially migratory population,” says Lai, lead author of the new paper.

From the start, BBYY defied expectations. Of the 28 hares tagged at Alert in 2018, she was one of only two to be sighted the following year. She was observed several miles from where she had been tagged. “At that moment, I started to suspect that Arctic hares may be more mobile than previously thought,” says Lai. Such mobility is unusual for lagomorphs, the group that includes hares, rabbits, and also pikas, tiny balls of fur that generally live in alpine settings. Lagomorphs are considered “homebodies,” she says, and the majority of them stay within a couple miles of where they were born.

While some of the 24 other hares collared by the team in 2019 also traveled well beyond the estimated maximum distance for a lagomorph, none hopped as far as BBYY. Her route was also unusually linear: From Alert, she traveled southwest to Lake Hazen, the largest body of fresh water above the Arctic Circle. The area is protected from the region’s most vicious winds, so it is a kind of polar oasis, with more vegetation than elsewhere on the island. But BBYY kept going, several miles past the lake, before finally turning around, passing the oasis again, and heading back toward Alert. The question for scientists is: “What on Earth was BBYY up to?”

Only about one percent of land mammals worldwide migrate, but several larger High Arctic species—including wolves, musk oxen, and caribou—travel long distances in search of food. In 2019, researchers reported that a young Arctic fox had gone about 2,700 miles, along coastline and sea ice, from Norway’s Svalbard archipelago to Canada’s Ellesmere. But BBYY’s walkabout is unprecedented in the scientific record for a herbivore of her size. And it’s almost certain the hare traveled even farther than the data shows: Lai and her colleagues typically received one location update daily, during a brief, three-hour transmission window, and missed the animal’s movements in between.

Data gleaned from BBYY’s great Arctic adventure is too limited to draw any firm conclusions—it is, after all, just one hare—but it raises the possibility that her species may migrate significant distances, which would be a first for lagomorphs at any latitude. Smaller animals typically cover less distance than larger ones; an Arctic hare would have to expend significantly more energy than a caribou. And any movement beyond the familiar can be perilous for a smaller herbivore. “For a prey species, she would need a really, really good reason to move,” says Lai.

Researchers outside the team but familiar with both Arctic hares and the region say they’re excited to have the long-distance travel documented—but they’re not necessarily surprised.

“These hares haven’t read our textbooks on movement ecology, and they do what works for them,” says Travis Booms, a research wildlife biologist for the Alaska Department of Fish and Game’s Threatened, Endangered, and Diversity (TED) program. “The extreme Arctic conditions that these animals live under push them to be constant opportunists.”

Fredrik Dalerum, a terrestrial ecologist in the Spanish National Research Council’s joint biodiversity unit, agrees. Dalerum has studied Arctic hares at another site on Ellesmere Island and in neighboring Greenland, where any research is a challenge. “When we go up, we go with an icebreaker,” says Dalerum.

In the Arctic hare’s home turf, “we have 5-to-10 percent plant cover, the rest is bare ground. The willows that these animals feed on are two centimeters tall, less than an inch,” Dalerum says. “It’s very low growth, very sparse vegetation, a very harsh environment, and I think that forces animals to move around, unlike in southern areas where they don’t have to.”

Well before BBYY’s journey, researchers had identified several adaptations unique to Arctic hares. They’re one of the largest lagomorphs, with a body size and weight comparable to that of Arctic foxes, “the global champions” of long-distance Arctic travel, Dalerum says.

Unusually for hares, Arctic hares also gather in large temporary groups. Dalerum says his team has counted as many as 200 animals at a single site. The behavior suggests that individuals must cover significant distances to meet up. It’s unknown, however, whether the animals may be migrating in groups along established routes, dispersing individually into new territory, or simply living nomadically.

Booms, who praises the BBYY research as “unprecedented and exciting,” is part of a team studying the movement of another species, the Alaskan hare (Lepus othus). It’s too early to say whether that species is also capable of racking up the miles, but “what we have learned is that these animals can cover long distances in short periods of time, moving up to 10 kilometers, or six miles, in an evening,” he says. High-latitude hares in general, he adds, “are extremely mobile, fast, and appear to have a very high endurance.”

While pandemic field season restrictions have put the Alert project on hiatus, Dalerum hopes work on Arctic hare movement continues—even if researchers aren’t able to place collars on more individuals. The genetics of different Arctic hare populations, for example, could reveal whether the animals mingle across long distances or remain isolated. “This is one animal in one season in one place,” he says. “The obvious thing is to generate more information, but that doesn’t have to be individual movement data.”

The High Arctic is also “an excellent sentinel area for climate change impact,” says Dalerum. Having a grasp of how Arctic hares and other species live there now is key to understanding the changes already underway. “These areas are likely to be the last truly Arctic communities and ecosystems,” he says. “Therefore, they are really important to keep an eye on, now, to have a baseline to see how they are progressing.”

As for BBYY, her wandering days are over. In early December 2019, her collar went stationary and registered a consistently low temperature, indicating she had died. “Of course, I was sad,” says Lai. “I was hoping she would come back to Alert for another summer, and prove they [the hares] were actually migrating. It’s sad, but it’s life in the Arctic.”

Now, Lai and her coauthors are preparing a second paper, on the movements of the other hares in the study, as a follow-up to the recent paper focusing on BBYY.

“I wanted one paper just about her,” Lai says. “She provided a lot of data that opened up a lot of research questions…. I really wanted to tell her story. It’s her legacy.”

Jo the deer offered researchers a look into migrations and how long it takes deer to visit a forest after a fire.
caves