Manhattan’s Only Vineyard Creeps Up an Upper East Side Brownstone - Gastro Obscura
Want to see fewer ads? Become a Member. 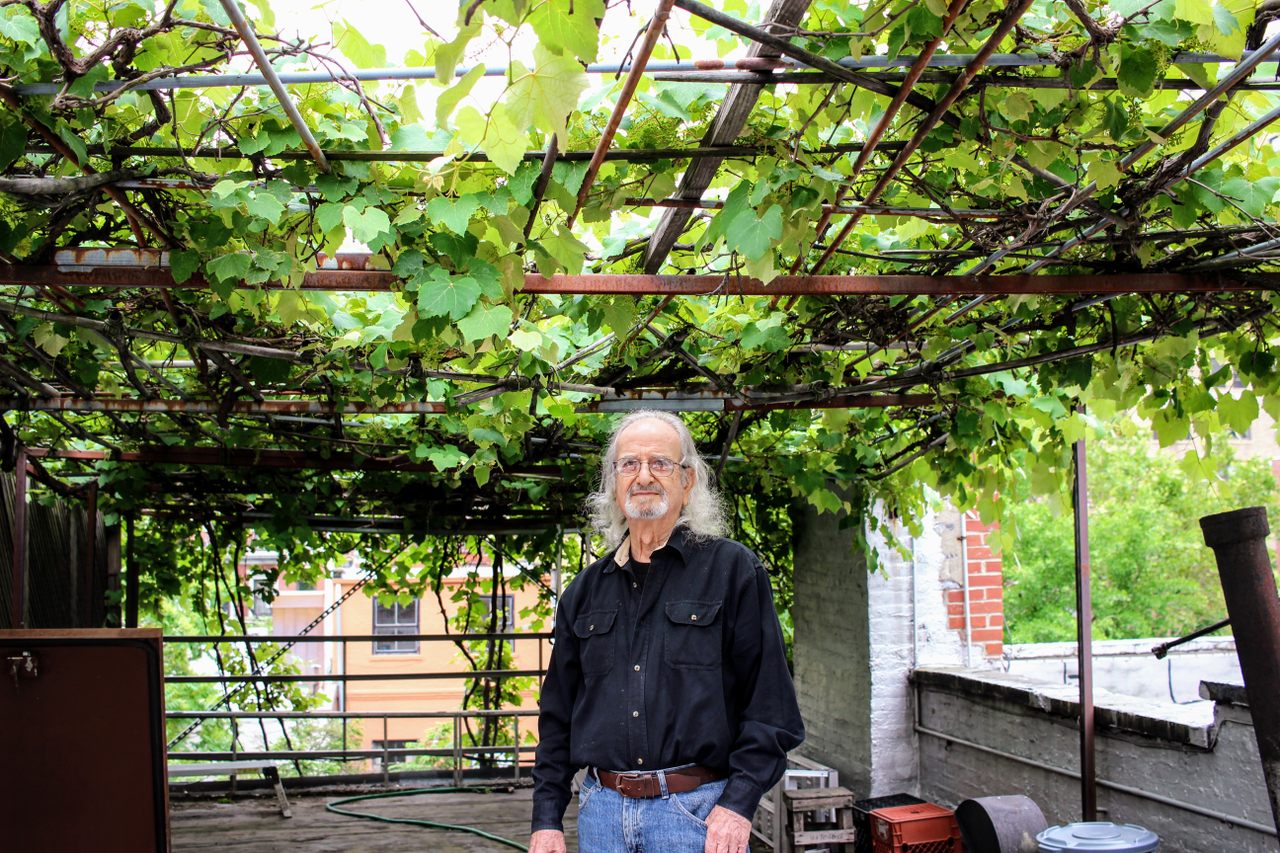 Latif Jiji under the vinous canopy of Chateau Latif. All photos by Rohini Chaki
In This Story
Destination Guide

Latif Jiji crouches slightly and points through a huddle of tendrils to the neighboring chimneys, air conditioners, and looming hulk of tall condominiums around us. “From here you can really establish that we are in an urban area,” he says, as I peer through the scrim of young grape leaves at the gridded chaos of Manhattan.

We are standing on Jiji’s roof, where a network of metallic poles and beams, fitted to make a trellis, are holding up Manhattan’s only vineyard. Born of a single grape vine (and a second one grown from a cutting of that original vine), this vertical vineyard sprawls up the four stories of the Upper East Side brownstone that Jiji and his wife, Vera, have called home since 1967. “If you look at satellite images of the house, you’ll see it’s the only one with a green roof,” he says, a bubble of prideful effervescence escaping from his otherwise academic demeanor. This is Chateau Latif, a family-run winery, in operation since 1985, but open only to friends and family.

Jiji, who is 91, has just climbed four floors without pause, nimbly hoofing up a final flight of what can at best be described as a spiral step-ladder, to a hatch-door leading to the roof. I follow gingerly behind, squeezing and contorting myself while clinging to a flimsy pole he has helpfully affixed for me.

Before climbing to the roof, we toured the garden of the Jijis’ brownstone, a rare luxury of open space amid the asphalt jungle of a breathless city. The creaking splendor of the house—oriental rugs on dark wood floors, walls of books and framed black-and-white portraits, a piano in the living room—gives way to this fertile patch of green. There’s a cherry tree and a Japanese maple, but it’s the vine that’s a show-stopper, spindling out of the ground and along the perimeter of the yard, scrambling slowly but surely up the back wall of the house on its 50-foot journey up to the roof, where it extends a further 50 feet on the trellis.

The backyard was going to be Mrs. Jiji’s kingdom, but in 1977, when his wife wasn’t looking, Jiji planted a vine in one little corner that he bought from the local nursery. “By the time she noticed it, it had already taken over,” he says. The vine first bore fruit in 1984, a healthy 24 pounds of Niagara grapes that were not enough to make wine. But since 1985, Chateau Latif—a coinage by Vera Jiji that is a clever play on Jiji’s first name and the famous French wine estate Château Lafite—has been fully operational.

Jiji has maintained a notebook recording the annual harvest and the makeup of the harvest crew over the years. That first year it was just him and one of his daughters. But the whole family usually pitches in for harvest day, typically on a weekend in late August or early September.

Picking the date for harvest is a precise science. Beginning in August, Jiji monitors the sugar content in the grapes by taking a sample from different parts of the vine. The grapes vary in sweetness depending on their location, he says, and he finds that the ones farthest from the roots are the sweetest. Every few days, he plots the average sugar content on a graph, extrapolating a date by extending the curve charting the steady progression of sweetness.

Harvest day is a frenzy of activity at Chateau Latif. Jiji’s children bring their friends, other family friends join, and excited children bound about the house. “When it got to be too much, I had one person be the crew chief,” says Jiji. The crew chief assigns responsibilities: picking the grapes, weighing and washing the bunches, and standing on call to sweep away fallen fruit. Sometime in the nearly 35-year run of the winemaking operation, Jiji installed a pulley system on the roof to lower baskets of grapes to the backyard. “My daughter’s usually in charge of the pulley,” says Jiji, “So she’ll be on the phone telling the person in the backyard that the basket’s coming down.” The largest harvest on record was a staggering 712 pounds of grapes.

The littlest crew members—the Jiji grandchildren and other young guests—love cranking the wheel of the shiny red crusher and destemmer in the basement, which separates the stems from the fruit. The pulpy grape mush—pits, skin, and some stray stems—is then run through a wine press. Some family members love the resulting clear, pressed grape juice more than the wine.

The team then pours the juice into five-gallon glass jugs for fermentation, which will soon cause the basement to smell of wine. After a few weeks, “sometimes you’ll be smelling the wine upstairs,” Jiji says. “It’s very nice.” Once the juice has fermented and turned to alcohol, the jugs, stoppered with airlocks that prevent oxidation, are left to age in a Jiji-designed, climate-controlled wine closet, alongside bottles of previous Chateau Latif vintages.

People from all over the world have participated in the Chateau Latif winemaking, and there are names on the harvest record book that Jiji no longer recognizes. After the day’s work, participants celebrate over glasses of last year’s vintage and a catered dinner. Everyone goes home with a bottle of Chateau Latif’s finest.

“I like to do things that are unusual,” says Jiji, who then clarifies that he never intended to create the only vertical vineyard in Manhattan. He was born to an Iraqi Jewish family in Basra, the youngest of five siblings, and the first in the family to study beyond high school. He came alone to the United States, in 1947, and enrolled in Hope College in Michigan. “Things really turned bad after that,” he says, about the status of the Jewish community in Iraq, which suffered the fallout of the United Nations Partition Plan for Palestine. The UN plan recommended breaking Palestine into independent Arab and Jewish States, a move vehemently opposed by Arab nations. “One of my sisters escaped through the border to Iran with her baby,” Jiji says. “Two of my brothers were stripped of their citizenship, and left for Israel.”

Already in the U.S., Jiji later transferred to the Massachusetts Institute of Technology. He graduated with a doctoral degree in mechanical engineering from the University of Michigan, and retired in 2014, after 60 years as a professor, 50 of them spent teaching at The City College of New York. Jiji’s parents left Basra for Israel in 1956. “It’s rare that Jews are buried where their grandparents are,” he says. His grandparents are buried in Baghdad, where his parents were born. Jiji never returned to Iraq.

“Not a day goes by without me thinking about the house that I was born in, grew up in, and the house that I left,” he says, of his ancestral home in Basra. It was a two-story structure, and had the characteristic mashrabiya, the oriel window with carved wood lattices that is found on the second floor of traditional homes in Basra. The central courtyard had a vine just like the one we are sitting beside in his Manhattan backyard. The vine in Basra climbed straight up, onto the roof, supported by a pole Jiji had constructed for it. It had no grapes, but Jiji’s father would make wine from store-bought grapes. The Basra house was demolished soon after Jiji’s parents left, as part of a government-implemented urban development program.

Jiji freely admits to not being a wine aficionado. He can only describe his own wines as “fruity, but not too sweet.” It’s the story that thrills him, the intergenerational tale of a Jewish family, with roots in Iraq and now in America, all coming together under one roof to reap the fruit of a plant that gives unceasingly. “I’m not competing for quality,” he says. “It’s the story I’m selling.”

In Singapore, Playgrounds Are Capsules of National Identity

Police suspect a rival grape-grower got a little jelly.
birds

The Birds of Prey That Stand Guard Over California's Vineyards

Without them, the state's lucrative wine grape crop could be gobbled up by smaller birds.
wine

Beer, sake, and a certain flowery wine had their start as women's work.
Video