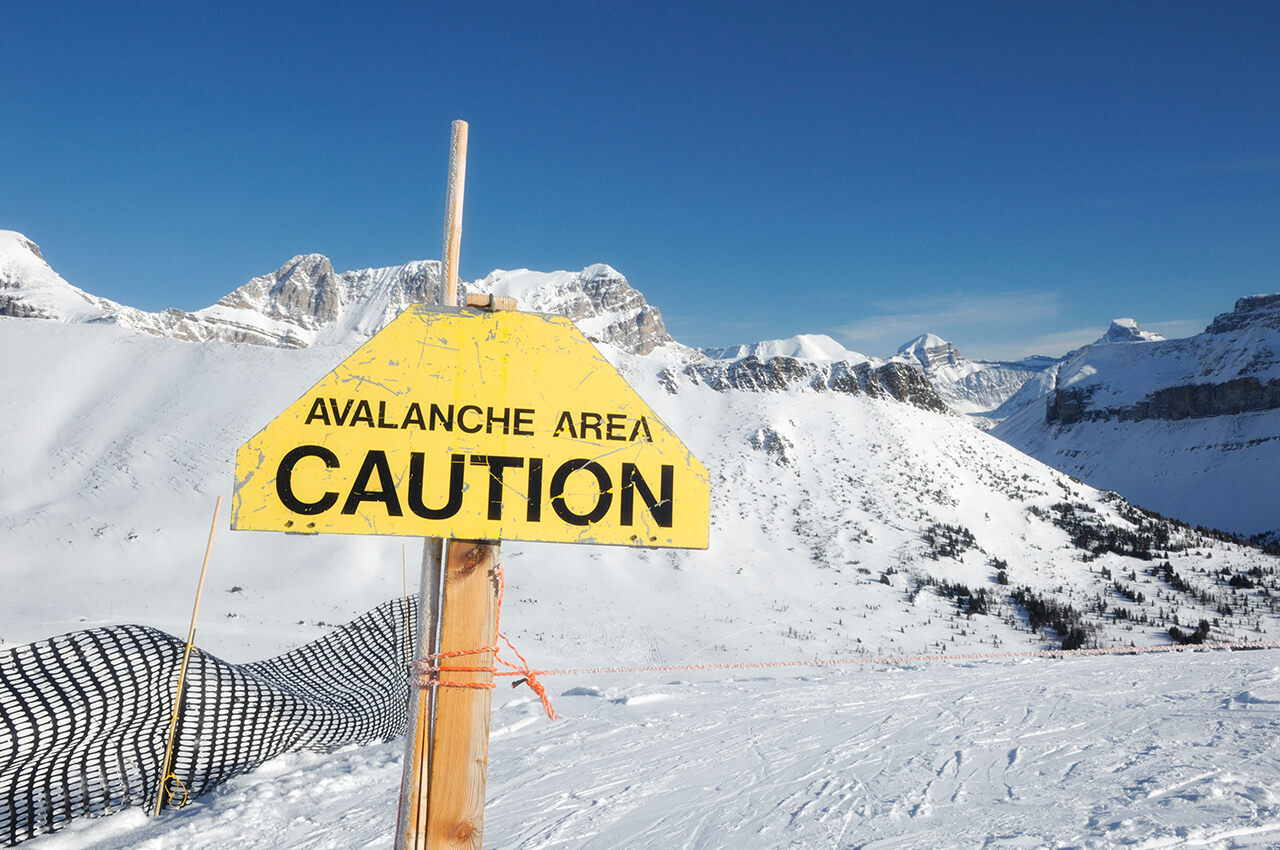 John Wentzel was one of the only people awake in Wellington, Washington, early on the morning of March 1, 1910, when he heard a clap of thunder and a low rumble. Wentzel, a laborer for the Great Northern Railway in the Cascade Mountains, ran outside the hotel where he’d been staying just in time to see what he described as the end of the world.

A massive avalanche was roaring down Windy Mountain and heading straight for two trains loaded with passengers on the tracks below.

“It seemed as if the world were coming to an end,” Wentzel later said. “I saw the whole side of the mountain coming down, tearing up everything in its way … Trees, stumps, and snow were rolling together in gigantic waves … I saw the first rush of snow reach the track [and] swallow the trains.”

The two trains—one an express, the other carrying mail, both stranded for a week by one of the worst storms the Pacific Northwest had ever seen—were swept off a ledge and down 150 feet into a ravine, killing 96 people in what still remains the deadliest avalanche in American history.

In February and March 1910, avalanches all across the Pacific Northwest—from Washington and British Columbia to Montana—were hurtling down mountains and destroying nearly everything in their path. Few could have known at the time, however, that the deadly series of slides would change how humans study avalanches forever.

“The roots of our scientific research into avalanches in North America began in 1910,” says Blase Reardon, an avalanche forecaster in Montana. “The research that began back then continues today.”

While humans have been dealing with avalanches for ages, little scientific research had been conducted in North America prior to the 20th century. (The Swiss had done some work in the 18th and 19th centuries, but it wasn’t particularly extensive, and little of that knowledge had migrated to the New World.) Reardon, who has studied snow around the world and edited the American Avalanche Association’s scientific journal, says fewer people were in the mountains back then, and those that were, like miners and prospectors, accepted avalanches as one of the dangers of life on the frontier.

But that began to change in the late 1800s and early 1900s, as railroads and people began to spread across the western United States. Suddenly, remote mountain passes were becoming critical routes of commerce.

In the mountains, snow often piles up like a multi-layer cake. An avalanche occurs when one of those layers of snow collapses as a result of an external force. As layers pile up through the winter, the possibility for an avalanche—also called a snowslide—can increase.

That danger was on the rise in early 1910. That winter had been one of the worst anyone in the Northwest had ever seen, but it saved its most devastating blows for February. According to Corby Dickerson, a meteorologist with the National Weather Service, a number of locations throughout Washington received record amounts of snow that month, including Cle Elum, which on February 24 had approximately 40 inches of snow on the ground.

Midway through the month temperatures increased, resulting in heavy, wet snow falling in the mountains. At the end of February the snow turned to rain, adding even more pressure to a fragile snowpack. “The combination of these factors likely led to the catastrophic avalanches,” Dickerson says.

One of the first major ones that month came at 11:10 p.m. on February 27, in Mace, Idaho. The avalanche started at the top of a mountain and traveled more than a mile downhill, leaving a path of destruction 800 feet wide. The slide killed 12 people and destroyed 14 homes. The next day, another one came down in the neighboring town of Burke, killing another five people.

In Washington, two trains bound for Seattle were stranded by avalanches that had blocked the tracks over Stevens Pass. For days, railroaders had been battling drifts, but no matter how hard they worked, the snow kept piling up and sliding down the mountains.

On February 23 laborers were able to clear a path in the snow long enough to get the trains through a tunnel at the top of the pass. After the trains were moved, an avalanche came down where they had been sitting just hours earlier, destroying a building and killing two men.

The news terrified the stranded passengers, but officials assured them they were safe where they were. While some passengers wanted the trains parked inside the tunnel, the railroaders reminded them that the portal would fill with smoke from the locomotives. They believed that the stretch of track on the side of Windy Mountain was the safest place for the trains to wait out the storm, because no one had ever seen a slide come down that slope.

After days of snow, the weather changed and a heavy rain began to fall in the Cascades. Early on the morning of March 1, a rare winter thunderstorm rolled into the area. At 1:42 a.m. a rumble of thunder apparently triggered a slide on Windy Mountain. The snow roared down the slope and pushed the stranded trains down into a deep canyon. More than 100 people were on board at the time.

Laborers rushed to the scene and began to rescue as many people as they could, but for many it was too late. “The bodies … taken out are fearfully distorted and mangled,” one person later wrote, according to Gary Krist’s book The White Cascade. “The heads of some are smashed and limbs are torn in two and the bowels of some are torn out.” At least one supervisor provided laborers with whiskey to calm their nerves during the gruesome recovery.

While they were still recovering bodies in Wellington, another group of railroaders were busy trying to clear the tracks 300 miles north at Rogers Pass, British Columbia. On March 4, a slide came down Mount Cheops, blocking the Canadian Pacific Railway’s route to Vancouver. Laborers were sent to the site, where they worked well into the night trying to reopen the line. At about midnight, another avalanche came down, burying 58 men. Some died from blunt force trauma, while others suffocated inside the crush of ice and snow. It was the deadliest avalanche in Canadian history.

Avalanches are classified on a destruction scale. A D1 would be harmless to a human; a D5 could permanently alter the landscape. A number of the large slides in 1910 would have been rated a D3 or D4, according to researchers.

In total, more than 180 people died in avalanches in British Columbia, Washington, Oregon, Idaho, and Montana between February 25 and March 13, 1910. Later that year, a forecaster for the U.S. Weather Bureau, Edward A. Beals, wrote a report about the unusual series of snowslides. A few years later, he issued one of the weather bureau’s first-ever avalanche warnings.

The study of snow got another boost following World War II, when members of the 10th Mountain Division—an Army unit trained in mountain warfare—returned home and began an outdoor-recreation revolution. Numerous ski areas across the West were founded by veterans, and understanding avalanches soon became an important part of the business.

Today, Reardon says, snow-workers can generally be split into two groups: ski patrollers, who conduct avalanche mitigation by firing explosives at a slope—triggering a slide can help eliminate the threat in a controlled setting—and those, like him, who work at regional forecasting centers.

Reardon works for the Flathead Avalanche Center, which puts out forecasts for northwest Montana, including Glacier National Park. He’s often in the office well before dawn, looking at weather reports and observations from across the region to predict the likelihood of avalanche activity. Forecasts include a color-coded level of danger for slides in a certain area: green for low danger, black for extreme danger. Once the morning report is out, forecasters head into the field themselves to gather data that will be used in future reports.

One way they do that is by digging pits in the snow and visually inspecting the layers to see how stable the snowpack is. That information is important not just to recreationalists but also to railroads and highway departments that need to protect infrastructure.

“It would be impossible to be an avalanche forecaster who just sits in an office,” says Erich Peitzsch, the former director of the Flathead Avalanche Center who now studies snow, ice, and glaciers for the U.S. Geological Survey. “That’s why a lot of us love this job—because we get to be in the mountains.”

Over the last few years, Peitzsch has been using tree rings to gather data about historic large-magnitude avalanches. By doing so, he can determine when a tree might have been affected by a slide. While the use of dendrochronology to study avalanches is new, Peitzsch says he hopes it becomes more widespread in the coming years to help determine whether infrastructure or homes should be built in certain areas.

That’s especially helpful as more people move into the mountains. Western states like Colorado, Utah, and Washington are among the country’s fastest-growing. As more people live, recreate, and travel in the mountains, Peitzsch says, it’s important that they better understand the world around them.

“What happened in Wellington could still happen today,” he says. “But now, because of research and avalanche forecasting, we have a better sense of when a slide might happen. We have a better grasp on the science.”

The explanation behind a "drastic," bone-chilling, mysterious weather event in the Upper Midwest.
science

They're actually scientists. And in Bozeman, they're trying to keep people safe.
science

Hurricane Irma Has Left the Caribbean Brown and Barren

Winds up to 185 miles per hour stripped trees bare, but the vegetation will gradually return.
Video • PinDrop