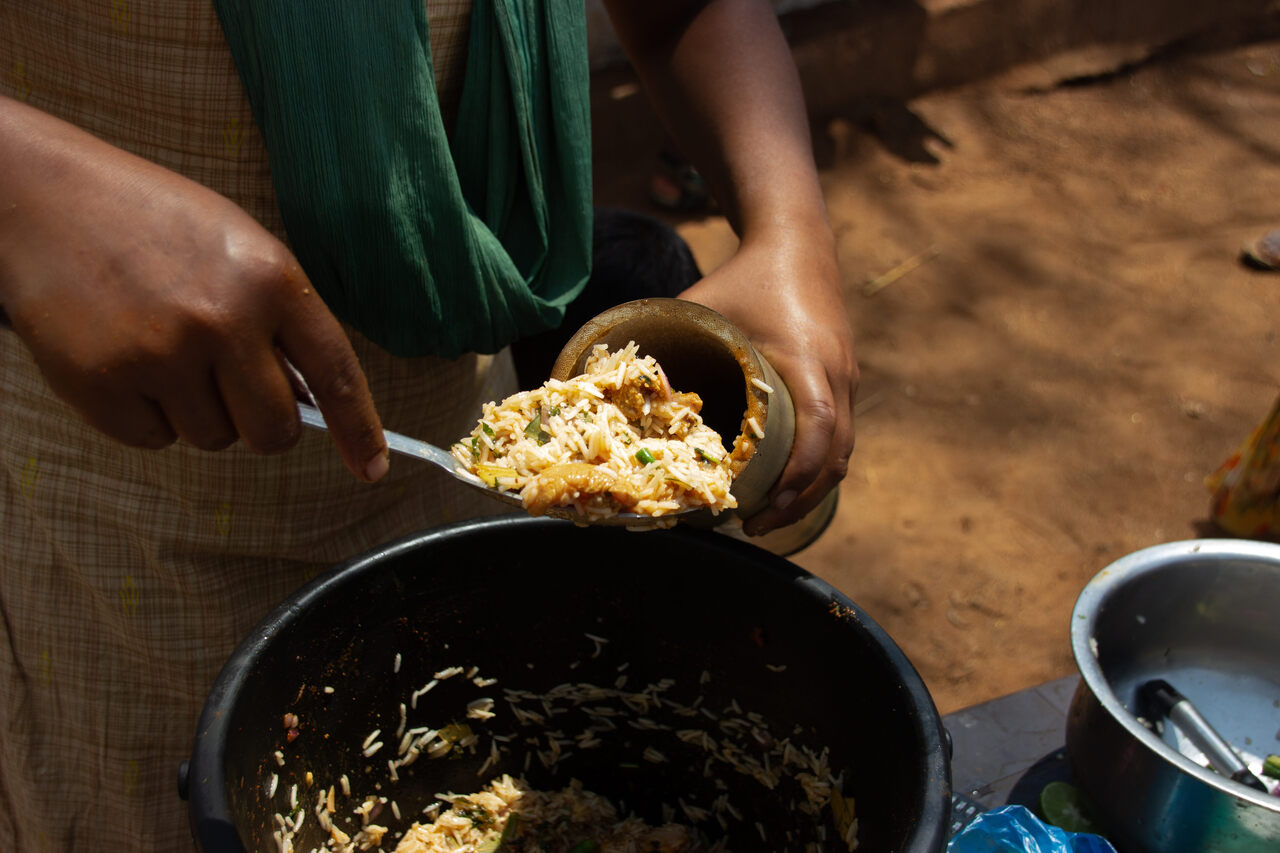 At her roadside stand, Sowbhagya Lakshmi fills a green bamboo shoot with a mixture of rice, chicken, and spices. All photos by Justin Nisly
In This Story
Destination Guide

Three years ago, Sivarama Krishna, a senior chef at a hotel management school connected to the Andhra Pradesh Tourism Department, was scouring the southeastern Indian state for a dish that could put it on the map. He found what he was looking for in a lush mountain valley called Araku: bamboo biryani. The dish had all the right components of a breakout food star—it was delicious, hyperlocal, relatively unknown, and visually interesting. As an added bonus, it would once again give Andhra Pradesh a claim to biryani.

Andhra Pradesh had lost its claim to the popular rice dish due to a political divorce. When the less-developed region of what is now Telangana, whose residents long felt neglected and underrepresented, split to become its own Indian state in 2014, it took with it the thriving IT hub of Hyderabad, along with the city’s famed biryani. Made of layers of rice and meat slow-cooked with cardamom, saffron, and other spices, biryani came to India from Persia and became a staple across India’s Muslim communities. But even as it gained popularity and became one of the country’s best-known culinary exports, biryani has remained synonymous with Hyderabad.

For the state’s tourism bureau, this was a big concern. Last year, one official told the Indo-Asian News Service he worried potential tourists would think, “Even the famous Hyderabadi biryani has gone to Telangana. What is worth seeing in Andhra Pradesh?” Bamboo biryani was one response—perhaps Andhra Pradesh could have a biryani of its own.

That is because the bamboo-cooked variety of biryani is not from Hyderabad; in fact, it’s not from a city at all. Instead, its origins can be traced to the dense forests of Araku Valley, where indigenous communities, known as Adivasis (or “original inhabitants”) traditionally live. As centuries of migration and newcomers shaped what would become modern India, Adivasis lost access to much of their land, and British colonizers stigmatized many tribes. Today, despite being a minority group, 104 million Adivasis live in more than 700 different tribal communities across India. According to the Andhra Pradesh Tourism Department, there are 15 communities within Araku itself.

As part of the government’s push to increase tourism, Krishna visited those Araku communities in 2017 to collect Adivasi bamboo biryani recipes. He went on to teach nearly 80 other chefs, students, and stakeholders across the state the techniques, and encouraged them to put the item on their hotel and restaurant menus. As their traditional dish grows in fame thanks to this tourism strategy, the Adivasi cooks of Araku Valley have responded not only with interest, but innovation.

Sowbhagya Lakshmi, who comes from the Konda Dhora tribal community, is one of those Araku Valley-based chefs. In the village of Chaparai, she sells platters of bamboo biryani while her four-year-old son, Babu Muna, plays around her stall. Cars whiz past on the bridge where she cooks, and families wade in the waterfall behind her. Eight years ago, when Lakshmi started cooking bamboo biryani for a living, there were only a few stands like hers, she says. Now, during peak tourist season from November to January, there are close to 30 just on this road.

“We are slowly becoming popular,” she says. When I ask what makes bamboo biryani special, she replies, “Try it, then you’ll see!”

Generations ago, tribal communities in Araku made chicken and biryani in bamboo shoots as an alternative to expensive pots and pans. They discovered that bamboo is essentially the pressure cooker of the forest—its thick green shoots help food retain moisture while protecting it from high heat. Traditionally, bamboo chicken has been simple fare: chicken mixed with salt and red pepper, placed in bamboo and then set on an open flame. (With rice added, occasionally, to make biryani.) But despite the common misperception that indigenous traditions are locked in the past, Adivasi chefs like Lakshmi are using this ancient cooking technique alongside new and complex spices and flavors.

Lakshmi’s variety involves cubing chicken and mixing it with freshly diced red onion, tomatoes, and green chilis, before tossing in seasonings including bay leaves, ginger, cilantro, chili powder, coriander powder, a homemade masala of cloves and cinnamon, and a bright-red powder she calls jaji puvvu, or pulverized mace. Then she adds tangy rock salt blended with lemon in large pinches. After stuffing the hollow bamboo to the brim with chicken and rice and capping it with leaves, she places it directly on the fire for 45 minutes, where its green hue slowly morphs to charcoal black. After the outside has completely burned, she removes the leaf cap, and tips an aromatic meal of rice and chicken onto a bamboo leaf.

The stalls where Lakshmi works are now a destination for Indian tourists. One teen, Vishal, is visiting from Hyderabad, the city he says has “the best biryani ever.” He is curious what this rival biryani has to offer. Badri, another Hyderabadi teen, is skeptical. After his first bite, he says, “This one tastes different. Yes, the masalas are completely different.” But then he admits that he likes it and finishes off his plate.

Araku is connected to the rest of India by a narrow highway and a railroad that passes through tunnels and steep mountain switchbacks before emerging into a forested valley. Known for its coffee and cacao crops, most of the valley consists of villages linked by dirt roads, but downtown Araku is relatively developed and includes tourist attractions meant to showcase the region’s cultural and agricultural history. Here, visitors can walk from the somewhat-neglected Tribal Museum to the more polished Coffee Museum, and finish at a large chocolate shop with products made from locally grown cacao. Hotels and squat shops populate the main drag, and the stunning Eastern Ghats mountain range is never far from sight.

Within a block of the Tribal Museum, a cheerful man named Dombo shows off his family’s roadside stall. On this day, Dombo, who comes from the Bagata tribal community, is joined by his 15-year-old daughter Bhuvana. The two make bamboo biryani in practiced harmony; she takes the lead on seasoning the chicken and rice while he builds the fire. Dombo was a day laborer until five years ago, when an influx of tourists piqued his interest. He started an Adivasi food service with his wife after witnessing the rising popularity of bamboo chicken and bamboo biryani.

Bhuvana, who says that she likes her family’s bamboo biryani better than the more famous varieties, mixes together a blend of spices and—somewhat unusually for this dish— a healthy pour of ghee. Ghee, she says, helps prevent the biryani from sticking to the insides of the bamboo shoot when roasting.

As he turns over the bamboo shoots on the fire, Dombo wryly notes that he grew up eating a far simpler version of this dish. “I didn’t think much of it then,” he says. “I had it when I went to visit my family in the interior forest,” land that has belonged to Adivasi communities for generations. But like many tribal communities in Araku, Dombo’s relatives moved to the ever-expanding town, where developers from outside the community have felled swaths of trees to make way for new hotels and shops.

While Andhra Pradesh has embraced Araku’s most intriguing dish, the same cannot be said of the land where it comes from and the people who make it. Bharath Bhushan Mamidi, the director of the nonprofit Centre for Action Research and People’s Development, has spent several decades working with Araku’s tribal communities, and says that the valley has completely transformed over the past 20 years, largely to the detriment of the indigenous communities.

Because indigenous communities are often poor and unfamiliar with property deeds, Mamidi says that businesspeople from outside the valley have purchased their valuable property for a pittance. The state government spent more than a decade trying to mine bauxite (used to make aluminum) in the area, which would have catastrophic impacts on the environment. Community pressure has halted the project.

The new hotels and shops springing up across the region have brought Adivasi communities new opportunities and a broader customer base, but have also restricted access to their own land and natural resources. Government support, when it comes, has not made a serious dent in the low literacy rates and poor health outcomes of many tribal communities. And, Mamidi says, the indigenous communities often don’t benefit financially from the marketing of their cultural heritage, which is packaged and sold by businesses and the government without their input.

A middle-aged Adivasi woman who performs at a hotel run by the tourism department agrees. When growing up, she danced for celebratory events in her village. But now she and a troupe of 16 performers walk through the mountains each day to dance for tourists, earning around $2.50 each. “The money is not enough,” she says. She also has to work as a day laborer and care for her daughter, and she can’t afford to cook bamboo biryani herself.

While most Adivasis chefs speak more positively about tourism, many also recognize the risks and challenges that come with it. As Bhuvana splits a fresh bamboo shoot in half, presenting biryani on a natural platter, Dombo says he is happy about the food’s popularity. He has become a small business owner, and he has been able to experiment with variations on his traditional foods. Still, he notes that “people come from all over to try our food, and then copy it.”

Now, with more non-indigenous chefs cooking the dish across the state, it’s possible that the original Araku version won’t seem as unique. But the biryani cooks of Araku hope people will continue to make the trip over and through the surrounding mountains to eat bamboo biryani made by the people who know it best.

Don’t be fooled by the name of this Bengali relish.
Want to see fewer ads? Become a Member.
Related

A state-spanning network of volunteers powers the program.
Read more
Thanks for sharing!