Around the World in 105 Cows - Gastro Obscura
Want to see fewer ads? Become a Member. 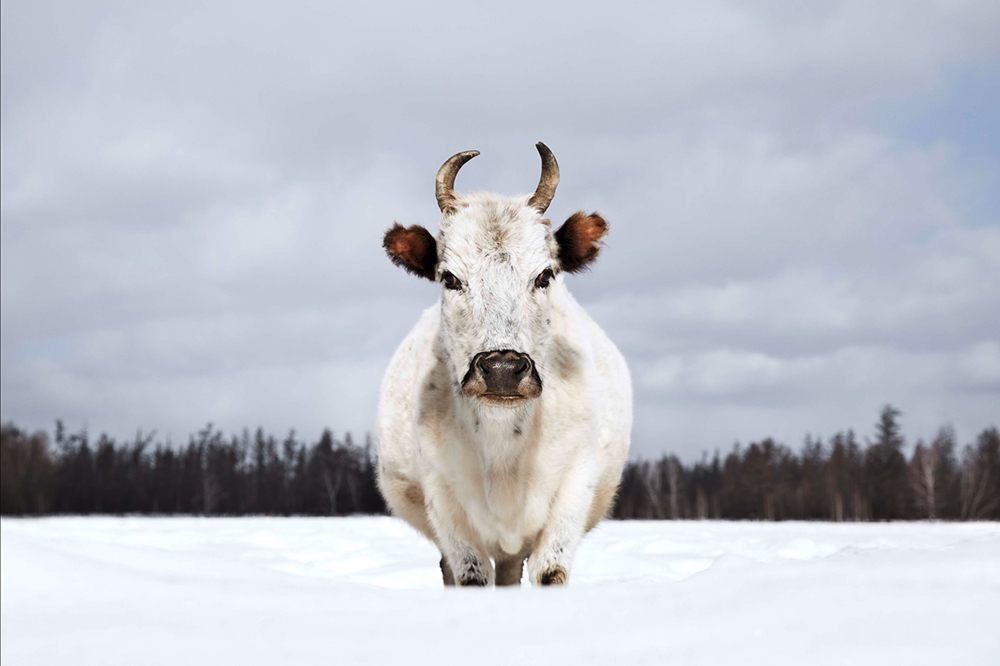 While Werner Lampert was living on an alpine pasture, he discovered that cows have an insatiable appetite for, among many things, poetry. Each morning, he’d clamber up a small hill to the pasture where his bovine neighbors were grazing. There, he’d read aloud the works of the German Romantic poet Friedrich Hölderlin. The cows would gather around him, listening attentively until he finished delivering the poem at hand. “When I stopped … they would soon scatter,” writes Lampert. “But the next morning they would be there waiting for me again.”

According to Lampert, cows and humans share a special relationship—one that goes way deeper than impromptu poetry readings. That’s why he partnered with a team of photographers to journey around the globe documenting the many breeds of cattle that populate the planet, as well as the humans who look after them, work with them, worship them, and eat them. His forthcoming book, The Cow: A Tribute, is an epic ode to the stunning diversity of cows and the many ways in which they’ve helped humans thrive over the past 10,000 years. From the skyward-pointing horns of Ethiopian Raya-Azebo cattle to the spellbinding eyes of Austrian Montafons, The Cow offers a comprehensive, striking mosaic of the global bovine body and soul. (Yes, Lampert asserts, cows have souls.)

With the help of cows, writes Lampert, humans have been able to successfully inhabit even the most extreme environments. In parts of northeast Siberia, temperatures can dip as low as -90 degrees Fahrenheit. But, with thick, white hair covering its compact body and udder, the gritty Sakha Ynaga can still produce plenty of milk. The Sakha people rely on this high-fat beverage for nourishment and medicinal purposes, and use the Sakha Ynaga’s dung as insulation to keep their homes warm throughout the harsh winter.

Lampert celebrates not only the resilience, strength, and utility of these age-old beasts of burden, but also the way they’ve shaped human communities, culture, and religion for thousands of years. Cows are spiritually revered within many religious communities, and have been since ancient times. “Sacrificial cattle were the link between man and the gods, a channel for sacred communication between them,” writes Lampert. “Cows were possibly the first sacred animals in human history.”

It’s with a similar tone of reverence that Lampert describes each breed of cow he profiles. He readily admits that an image of Tiroler Grauvieh, the silvery-grey, graceful cows that roam about the eastern Alps, currently features as the background image on his phone. “Of course!” he writes, “so I am reminded of their sheer beauty every day.”

The Ankole, found in Uganda, as well as parts of the Congo, Burundi, Rwanda, and Tanzania, is characterized by its majestic gait and giant, twisting horns. Warm to the touch, the powerful, bony structures are believed to be crucial tools for keeping cool. Filled with supportive tissue, the horns usher in warm, circulating blood, which cools as it flows to the tip of the horn.

Lauded for its striking beauty, the Ankole is also integral to community structure and affairs. According to Lampert, these cows are never sold, but rather included in dowries, offered up as appeasement if someone has broken community rules, or gifted to those who have suffered some kind of misfortune. “Ankoles help maintain equilibrium between people,” writes Lampert.

But while some communities have embraced cattle and bolstered populations, others have essentially destroyed them. This is the history of the North American bison, which once numbered more than 30 million by some estimates, stretching in vast herds across the Great Plains. European colonization and decades of habitat destruction, reckless hunting, and mass killing of the creatures (intended to deprive Native American communities of a food supply) shrunk that number to nearly 1,000 by 1890.

In a way, Lampert’s tribute to the diversity of the world’s cows is also a eulogy. He searches desperately for the Kouprey, a beautiful, elusive, endangered ox believed to be living in the Cambodian jungle. But the team couldn’t find a single one. According to Lampert, they’ve likely fallen victim to poaching and habitat destruction. This is part of a larger trend, he says. According to the Food and Agriculture Organization, of about 1,408 breeds of cattle, 184 are listed as extinct and 490 as at risk.

There was, perhaps, a time when these utterly mystifying ungulates were more than just cash cows to most of us. But, Lampert points out, something in this special human-bovine bond has been broken. We’ve begun to take without giving—or even really appreciating—our bovine companions. We view them as products, not as the fascinating, resourceful, stunning creatures they are.

Luckily, there might just be a fix. Don’t simply eat cow meat; meet a cow. Pick up a poetry book and take it to the pasture. Gaze into the mesmerizing eyes of a Montafon, or set the background image on your phone to a particularly glamorous Grauvieh.

“Cows have a hold over us,” writes Lampert, “and once you develop a passion for them, it will never leave you.”

Centuries of Persian Manuscripts, Now at Your Fingertips

It's time to change our 10,000-year relationship with cattle.
music

Inside the World of Obscure Livestock

Around the world, people are preserving barnyard standouts.
music