How a Mathematician Turned an Obscure Number Into a Scary Story - Atlas Obscura
Want to see fewer ads? Become a Member. 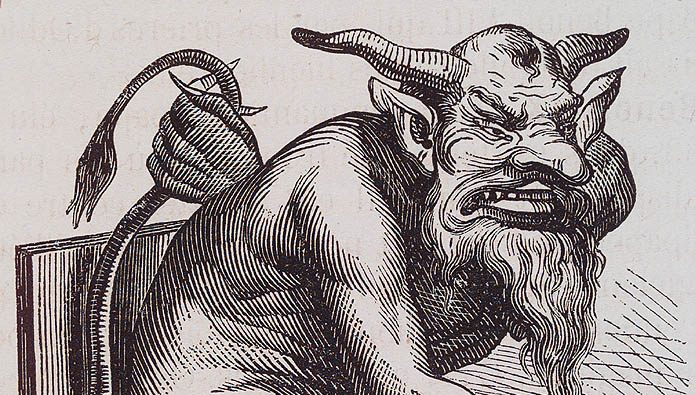 For the most part, digits are simply cold indicators, unable of expressing menace or guile, but then there’s Belphegor’s Prime, a supposedly sinister palindrome that has a number of odd qualities. Or at least that’s what one mathematic trickster would have you believe.

According to author, mathematician, and “father” of Belphegor’s Prime, Cliff Pickover, the infernal number was actually first discovered by prime number hunter Harvey Dubner, who determined that it was part of a sequence. The set of primes—that is, any number divisible only by itself, and one—could be reached by altering the number of zeroes on either side of the 666 to appropriate amounts. This is to say that the number 16,661, with no zeroes at all, is also a prime number. Then the next time a similar palindromic number becomes prime is when you have 13 zeros, then again when you have 42 zeros, and so on. “Harvey Dubner determined that the first 7 numbers of this type have subscripts 0, 13, 42, 506, 608, 2472, and 2623,” Pickover explains.

While natural prime numbers are as rare as any number (which is to say that they are not rare at all, considering that theoretically, an infinite amount of numbers exists), Belphegor’s Prime also stands out for its poetic symmetry. Another way to express the infernal number is 10(13)666(13)1, which truncates the 13 zeroes into modifiers in the parentheses, thus joining the Number of the Beast in the center of the string with a pair of traditionally bad luck numbers on either side. Furthermore, the number contains a total of 31 digits, which, as some have pointed out, is simply a backwards 13.

Still, it wasn’t until Pickover got his hands on it that it became the cursed number it is today.

Pickover is modest about creating the concept of Belphegor’s Prime, but it was his ability to give the large number character that is the reason is known today. “I am not actually the ‘creator’ of the number, in the sense that people have known about beastly palindromic primes before I gave a name to a very eye-catching number with 13 zeros, to help focus broad attention on it,” says Pickover. He has authored dozens of books on subjects ranging from mathematics and death to puzzles and medicine. His stated goal is “to expose a broad audience to the wonders of science and math,” and he does so using playful, but complex concepts like “vampire numbers” and “magic hypercubes.” Belphegor’s Prime is just another of his attempts to tease out the strange wonders of math.

Pickover named the number after Belphegor, one of the seven princes of Hell, who is known primarily for tempting mortals with the gift of discovery and invention. On Pickover’s own site, he warns people not to stare at the number too long, and to look away and take a deep breath, after a few seconds. He also links the number to a symbol from the mysterious Voynich Manuscript, housed at Yale University’s Beinecke Rare Book and Manuscript Library. Belphegor’s Prime is said to be represented in the manuscript by a glyph that resembles an inverted pi symbol.

Pickover admits that there is no truly demonic power held by Belphegor’s Prime—“I use my playful imagination,” he says—but the idea does make math more interesting. And if you still find it scary, you can take solace in the fact that 1000000000000077700000000000001, with the so-called “angel number” embedded in it, is also a prime. It looks like Heaven’s in the math game, too.

At Milwaukee’s Krampusnacht, we go in search of the essence of Santa’s unholy enforcer.
haunted

Haunted places have a lot to tell us about ourselves.
churches

The Nain Rouge has been stirring up trouble—and maybe generating some goodwill—for more than 300 years.
Want to see fewer ads? Become a Member.
From Around the Web
THE GASTRO OBSCURA BOOK
Taste the World!
An eye-opening journey through the history, culture, and places of the culinary world. Order Now