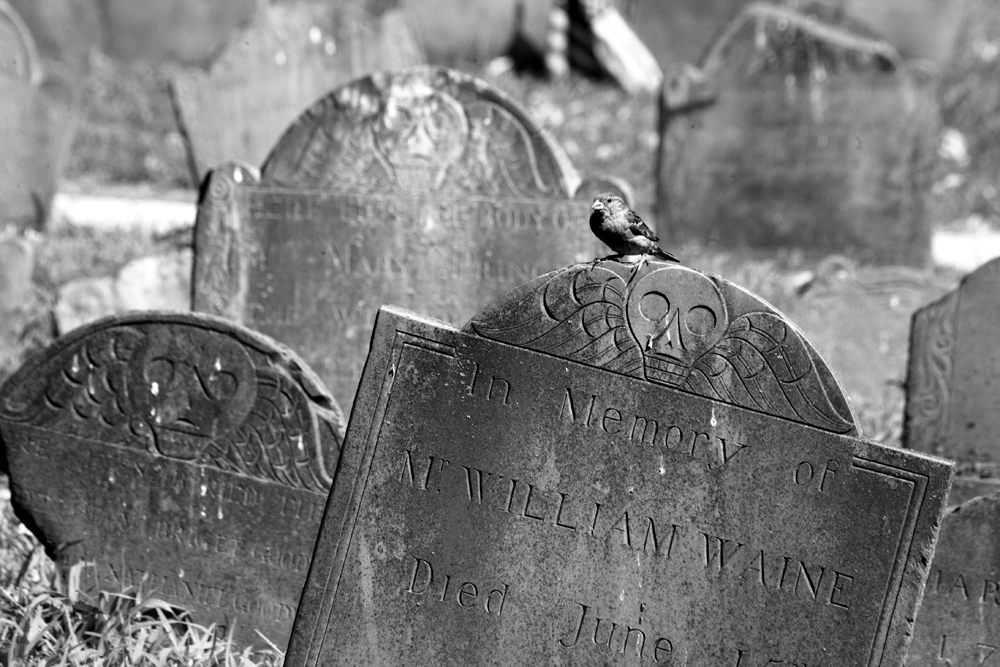 Birds sometimes find suitable perches in cemeteries—including this one, in Boston. Courtesy Peter Kelly
In This Story
Destination Guide

When Jackson Hudecki walks through Woodland Cemetery on a cold December morning, the place is almost empty, save for a few people visiting a gravestone, a woman walking her dog, and a small group of birders armed with binoculars and scopes. The century-old cemetery sits atop a bluff overlooking Hamilton Harbour on the west tip of Lake Ontario. Stand on the southwestern edge of the cemetery in winter when the leaves are gone from the trees, and you’ll see a jutting peninsula called Carroll’s Point. It’s an ideal spot for birding.

After a half-hour loop, Hudecki, Bird Study Group Director of the Hamilton Naturalist’s Club, has identified 14 species of birds, including a red-tailed hawk, a brown creeper, and a gaggle of Canada geese. The cemetery is an avian hotspot year-round, Hudecki says. Open water attracts waterfowl from November through March and April. Springtime brings migrating warblers, thrushes, and vireos. “It’s an area the winds are constantly pushing birds towards,” says Hudecki. Birds of prey take advantage of these gusts: “The winds hit off the lake, and just go upwards, and they’re riding it,” says Hudecki. “It’s amazing to watch.”

Sometimes, crowds of birders flock en masse. That happened in 2017, when a red morph Eastern screech-owl attracted crowds eager to snap its photo and hear its trilling whinny. Less common than gray- and brown-patterned Eastern screech-owls, the red morph is described as “a lovely, rufous, foxy colour” by Robert Curry in his book, Birds of Hamilton and Surrounding Areas. Because this relatively unusual owl turned up in the easily accessible cemetery, the burial grounds became a hotspot for birders and photographers. The mingling of birders and mourners revived conversations about how burials and recreation can—or can’t—coexist in cemeteries.

Hudecki and the Hamilton birding community aren’t alone in their fondness for cemetery birdwatching. Danielle Belleny, a wildlife biologist from Springfield, Missouri, has earned the social media moniker ‘the cemetery birder’ thanks to her enthusiasm for the pastime. Belleny is drawn to cemeteries for their atmosphere and accessibility. “I enjoy how tranquil they are, but also how easy it is to get to a cemetery,” she says. “Instead of having to go to a park that might be 30 minutes away, I can just go down the street to the cemetery, and have that same type of feeling of being able to recenter myself.”

Today’s cemetery birdwatchers are partaking in a long North American tradition of using cemeteries as recreation spaces. “The early landscape cemeteries, the rural cemeteries that began to appear in the 1830s in the United States, gave rise to public parks,” says Keith Eggener, head of the department of the History of Art and Architecture at the University of Oregon. People historically visited cemeteries to see examples of fine sculpture, horticulture, and the graves of local worthies, Eggener says. Families spread out picnic lunches near graves. Cemeteries “were very much places of community pride, particularly in a time when American cities generally lacked public parks, botanical gardens, art museums, and things of that sort,” Eggener says.

When the Eastern screech-owl dropped by, some cemetery-goers described birders behaving badly—disrespectfully “traipsing” on headstones, CBC News reported, and baiting the birds. The Hamilton Spectator reported a cemetery visitor complaining to the city after finding a crowd of fifteen assembled near a family plot. Cemetery birding devotees stress that none of these behaviors should fly. Harassing and baiting birds is a no-go with ethical birders, Hudecki says: Humans ought to keep their distance and not disrupt birds’ activities. Belleny says it’s crucial to give other humans a wide berth, too—particularly when they’ve come to grieve. “If there’s an active funeral, or someone mourning, I’ll avoid that area completely,” she says.

Rules and regulations for activities in Ontario cemeteries are set out in by-laws. While there are some oddities or holdovers from bygone eras—for example, the nearby City of Burlington includes horses in the list of pets that are banned from cemetery grounds—there’s nothing against visiting a cemetery for recreation. In fact, Hamilton Municipal Cemeteries, which oversees Woodland Cemetery, provides a cemetery etiquette guide acknowledging that “cemeteries are wonderful park-like settings,” where one can “enjoy the natural beauty of the plants, trees, and landscape.” All visitors are asked to avoid trampling on graves or clambering on monuments (even if doing so would afford a great look at an intriguing bird).

John Perrotta, Superintendent of Cemeteries with the City of Hamilton, says he hasn’t received any complaints about birders in the past several years he’s been on the job. “If there are burials, they definitely do scatter and come back when the service is over,” he says.

As for how cemetery activities will continue to evolve in the future, Eggener says, “I think it’s ultimately a decision that needs to be made by the stakeholders in a given community.” That means people with family buried in a cemetery, as well as the people who own and manage the space. “I think just as different people approach life differently,” he says, “so do they approach death differently.”

To Save Birds From Invading Americans, One Man in Poland Built Floating Forts