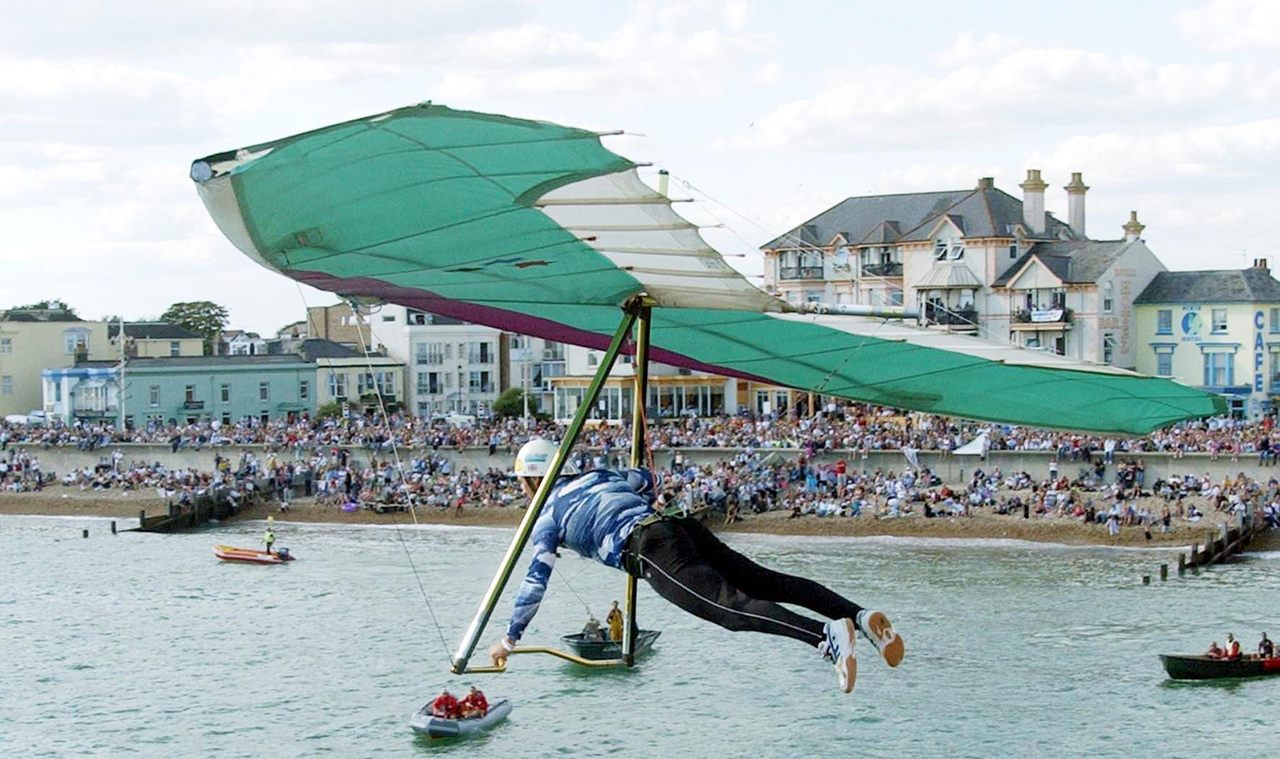 Freeman, soaring through the air at a competition. Gareth Fuller—PA Images via Getty Images
In This Story
Destination Guide

Hang-gliding instructor Ron Freeman stands tentatively at the edge of a pier on England’s south coast, assessing the wind speed. It’s warm with a slight breeze, the perfect conditions for the day’s International Birdman rally. His mind, body, and glider (the Geordie Flyer) are ready. Now, all that stands between Freeman and the £10,000 prize is 100 meters (roughly 330 feet) of the English Channel.

The International Birdman has been a stalwart of a smattering of British seaside summers since the early 1970s. Competitors raising money for charity leap off an elevated platform at the end of a pier, and try to stay airborne for 100 meters. But there’s a catch: They’re not allowed to rely on an engine. Instead, entrants take on the challenge in hang gliders, weird and wonderful homemade flying machines, or little more than a costume.

This year’s events are suspended because of the coronavirus pandemic, but competitors hope to fly again in 2022. Meanwhile, Atlas Obscura spoke to Freeman, a pro hang glider who has clinched 23 victories at the competitions in Bognor Regis, Eastbourne, and Worthing since 1997, to find out how he became one of the men to beat.

A hang glider’s a fantastic design because it’s light. Once we’ve stripped it down to the bare necessities so it’s safe to fly, it only weighs about 25 or 26 pounds.

In the earlier days [of the contest], we were only allowed a 30-foot wingspan, and most hang gliders were around 36 or 37 feet. So we had to cut the wing tips, and I had to learn how to chop and cut the sail. The tension on a hang-glider sail, when it’s fully rigged and taut, is about 500 pounds.The sewing has to be done correctly. It took me quite a few attempts, but once I learned how it all went together, we quickly progressed to developing a really, really fast wing. We weren’t restricted to any safety standards, so we could really push the bar, and some of the tensions on my wing were up to 750 pounds. But, there was a sacrifice to be made. If you pull the wing too tight, we couldn’t steer them! The wings became too stiff.

We also had a special [pilot’s] harness made. A manufactured harness had too much webbing, and it was too heavy. Once it was wet, it would sink you to the bottom of the sea in no time, so we developed the “hip harness.” It was basically just a strap around my backside, supporting my legs. We had a piece of aluminum in the back, and a wire coming down from the glider, connecting the piece of aluminum. We got rid of 95 percent of drag with that harness.

There was an awful lot of metalwork to do. Getting the sail tensions right, getting the whole thing balanced, and [having it also be] steerable was quite the task. I’m letting one or two secrets out here!

What are the aviation challenges of the Birdman Rally?

Drag is our worst enemy. The faster you fly, the more parasitic drag [a force against the aircraft that does not contribute to lift]. You would think if your airspeed doubled, the drag would double. It doesn’t: it quadruples. The people who organize the [Birdman] events, they know exactly what we’re up against. They’ve worked it all out.

For every one foot of height, a hang glider will glide 12 feet forward. If you work that out from a platform 30 feet high, [100 meters] is just about achievable. But it’s not very long, the takeoff platform. By the time you get to the end, bearing in mind the takeoff run, you’ve only got about six steps.

Mathematically, 80 or 85 meters (262 to 279 feet), which is what we were achieving [at first], was theoretically as much as we were ever going to achieve with a hang glider of 30-foot wingspan. When the rules changed in 2014, and we could go up to a full-size hang glider, that went up to about 95 meters (312 feet). So now we were getting very, very close.

The 100-meter jackpot distances are measured at a 90-degree line going straight out from the pier. [The hang glider] has to be very accurate to fly on this line. So we had to try and optimize performance for controlling the craft. That was the delicate thing to get right.

How did you break the 100-meter barrier?

You have to get three things correct to do a good Birdman flight. A good takeoff in the right direction is essential. You’ve got to fly at the right airspeed, and you have to get the right conditions. You’ll do 100-plus meters, providing the wind is not too strong and the sea is not too rough. If there’s too much swell, you’ve got to use that airspeed to climb over a wave, which is drag. That slows you down. If you can maintain a constant airspeed over calm water, you will fly a long way.

In 2013, I was the first person to break the 100-meter mark. I managed to do 106 meters (roughly 348 feet), but it wasn’t on the jackpot line. It was a case of redesigning how we flew the hang glider. It was all about center of gravity—where we actually hung from the glider. We learned that we needed the glider trimmed at a certain speed, and we flew low down to the water, just like the albatrosses skimming the Atlantic. Once you’re down to about three feet above the water, the performance of the wing goes up 20 percent. So the technique wasn’t flying out as far as you could: The technique was to take off and fly as fast as you could, then, when you met the water, level out like a surfer surfing a wave. That’s what started to work in 2013.

Describe your most successful Birdman attempt.

The following year, [I] couldn’t wait because we knew we had stumbled on something special. We needed hot conditions, a calm sea, with a wind speed of about seven or eight knots. Slightly off to the left. So we’re not asking for much, are we? Believe it or not, that’s exactly what we got in 2014!

Everything went perfect. Got down to the water’s edge, passed the 100-meter buoy, still doing about 45 miles per hour. For 17 years, I had been wanting to touch that buoy, but I went whizzing past so fast I didn’t even think about touching it. I splashed down at 159.8 meters (524 feet), but I actually landed 0.4 meters (1.3 feet) off the jackpot line, which is pretty accurate considering you’ve flown 160 meters! The judges marked me back to 159.4 meters, which I was well pleased with. I think that record will stand for a very long time.

Are there any competitors’ contraptions you wish you’d invented yourself?


In 2016, someone came along with a 60-foot wingspan. It had a huge propeller, and a sort of bicycle attached to the wing. It was working; he was producing enough thrust off this propeller. He actually climbed, which you very rarely see off the pier. We always take off and dive down to the sea. And after about 45 meters (148 feet) at the same height, one of the cables on his tail at the back of the aircraft snapped. The whole glider went down into a 45-degree dive and he crashed into the water. I think he would have done the 100 meters that day, I really do.

In 2003, Richard Branson came along. He had sponsored a university to take part in the event. They had a replica of the Wright brothers’ biplane! And that was a beautiful, beautiful machine. When they were rigging it, I was looking at it, and I asked, “Can I meet the pilot who’s gonna fly this?” It was a young lad. He had a go flying a light aircraft for half an hour, and that was the only pilot experience he had. Well, when he took off, he stalled the glider, and it only flew about 10 meters (33 feet). It was a shame to see such a beautiful flying machine not being flown very well. It wasn’t the lad’s fault; I think he just drew the short straw.

Some of these universities turn up with some fantastic wings, and they’ve got an unlimited budget because they’re building it as part of their course. There’s no way myself or Tony could afford anything like that. There was another machine that turned up one year, they said it cost £16,000 to build, and it was all smashed up within minutes. They actually threw the whole thing in the skip, so me and Tony took some spare parts from it. But, they raised a lot of money for charity. That’s one thing that’s really good about the Birdman event: it’s a win-win-win situation for everybody.

Castell-building has been a tradition in the Spanish region for centuries.
sports

The Toughest Mountain Bike Race in the World

A day at your desk will not prepare you for this grueling competition.
games

For every talent, there must be a champ. Are you ready for Pêl-Law, lion dancing, or marbles?
List

4:18
Want to see fewer ads? Become a Member.
From Around the Web
Atlas Obscura Trips
Southern England: Lore of Dartmoor
View This Trip
Thanks for sharing!