Understanding How Bison Might Help Shape the Future of the Badlands - Atlas Obscura
Want to see fewer ads? Become a Member. 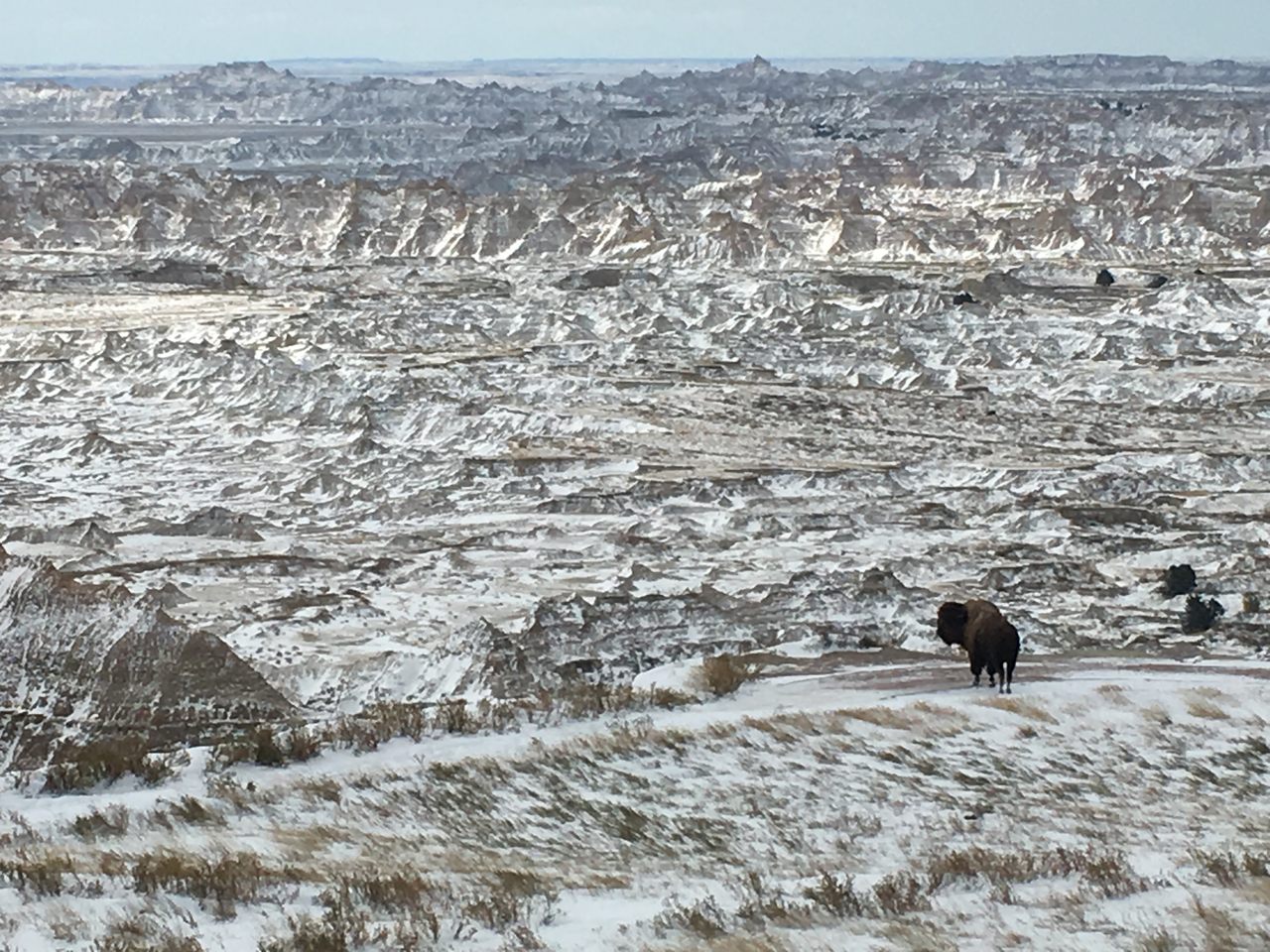 In October 2019, four bison bulls leapt out of a tractor trailer in South Dakota and charged with what might be interpreted as joy down a shallow, snowy hillside. They slowed to a trot as they took in their new digs. These bison were the first to walk and graze on this land—a newly designated swath of Badlands National Park—in nearly 150 years. And their return may provide insight into how reintroduced populations learn to engage with and impact land they haven’t trod in decades.

“I think there’s momentum to return bison to public and tribal lands, and that’s very exciting,” says Chris Geremia, Yellowstone National Park’s lead bison biologist and co–lead author of a study published today in the Proceedings of the National Academy of Sciences that analyzed how bison migratory and grazing patterns engineer spring’s green-up.

“Spring is such a key time,” he says. “The thought that bison moving across North America shaped spring speaks to how important bison are to the North American grasslands.”

Across the Great Plains, perhaps no species is as iconic—and, at one time, ecologically impactful—as the bison. Once numbering in the tens of millions, bison were hunted to the brink of extinction by the turn of the 19th century, and disappeared from places as far afield as Ohio and Texas. (The bison is also, ironically, the national mammal of the United States.) After dwindling to around 100 individuals, the population at Yellowstone has surged to around 5,000. The Badlands population, 350 miles away, had been entirely wiped out, but 50 bison were reintroduced there from Theodore Roosevelt National Park in North Dakota in 1960. The population has since grown to 1,200, which earned it classification as a conservation herd. The park’s new acreage—22,000 acres in total—was acquired from a private ranch in 2014 but hadn’t yet seen a bison. That’s where this new group, brought over and released from the park’s existing herd, was set loose.

“There now are in the neighborhood of six or seven that are hanging up near that pasture,” says Blaine Kortemeyer, acting chief of interpretation at Badlands National Park, who livestreamed the reintroduction. “It’ll probably be quite a bit of time before we start seeing bison in the central part of the new unit.”

Meanwhile, Geremia’s team in Yellowstone has been studying its more robust populations from the ground and from the air, including using satellite imagery to track grazing patterns, as a kind of preview of what the new Badlands herd could do, given time and space. They found that the herds follow new plant growth to higher elevations for a time, but then stop and amass, and wait until late summer or early fall to proceed farther.

“We thought, ‘What the heck are they doing when they stop?’” says Jerod Merkle, a migration ecologist at the University of Wyoming and coauthor of the paper. “We found that the bison are, through their movements, facilitating high-quality grasslands.”

“What bison do is they start aggregating, forming massive groups of hundreds, if not thousands, of individuals. They move in synchrony across the landscape, grazing the same areas again and again,” he says. “Normally there’s an inch or two of new plant growth, and they bite it off. And when the plant grows a new shoot, it’s like spring is happening again.”

As the animals roam, they turn plant growth into new fertilizer, and germinate the soil with their hooves. Bison herds pave the way for new life, and shape their environment just the way they like.

It remains to be seen how the new Badlands population will settle in, and whether it will grow and encourage a green-up the way the huge herds of Yellowstone do. “I think that’s why the park wanted to put them out there,” says Jim Matheson, assistant director of the National Bison Association. But it is clear they’ll take all the room to roam they can get.

Jo the deer offered researchers a look into migrations and how long it takes deer to visit a forest after a fire.
forests

Lauded for her research on gentle giants of the sea, Andrea Marshall is using her fame to find hope for our troubled oceans.
nature

Tragedy set Sicelo Mbatha on a course to understand, and make peace with, the wild on its own terms.
Video • AO Docs