Everything You Need to Know about Buying a Town - Atlas Obscura
Want to see fewer ads? Become a Member. 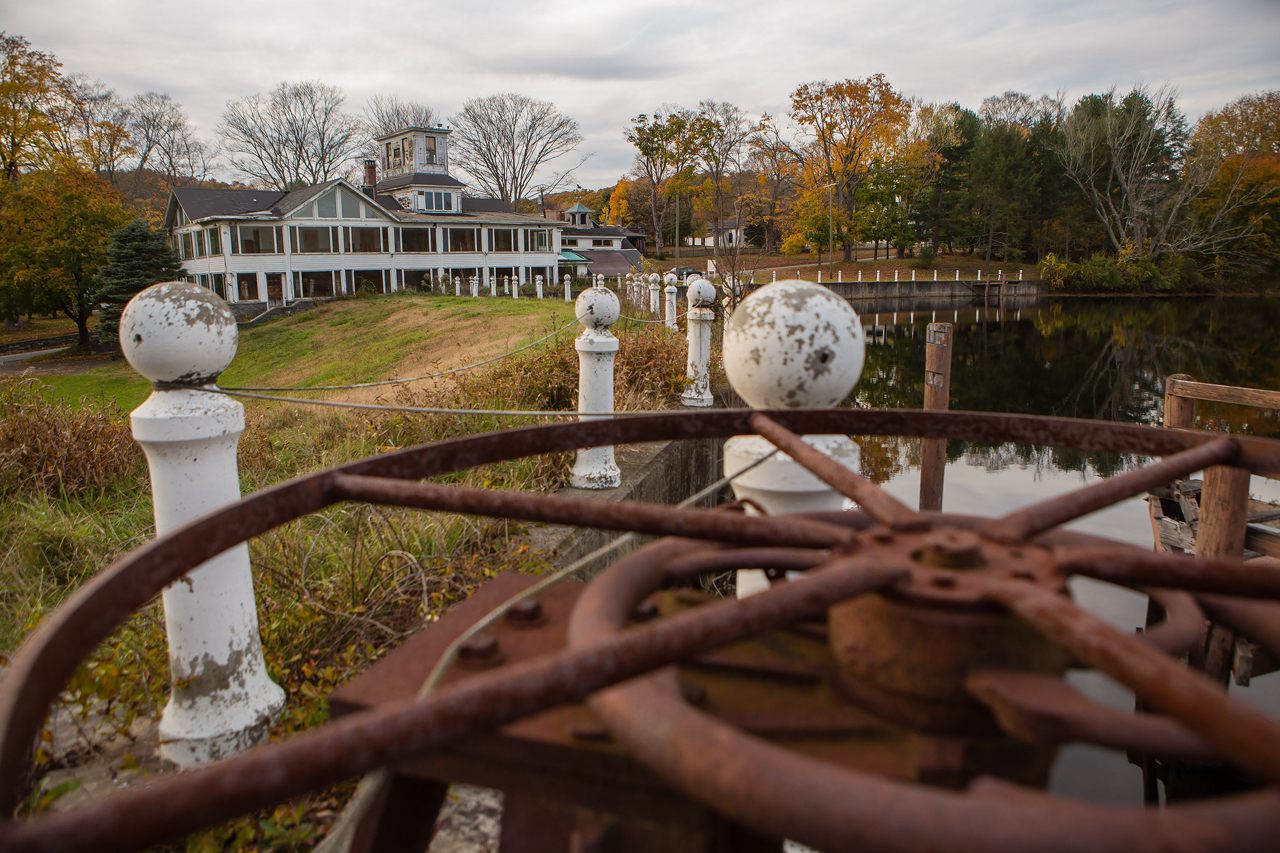 Every once in awhile, a close look at real estate listings turns up something odd: not merely a house, not merely land, but an entire town, sometimes a long-abandoned ghost village. The listings arouse primal desires reminiscent of childhood Monopoly games. You can own the houses, the streets, the banks, the taverns, the land, everything you can see. Perhaps it can become a commune, a tourist destination, or just a bizarre vacation home. But money alone might not guarantee the purchase of your dream town.

“It’s romantic, but it’s difficult,” says John Lovelace, a realtor specializing in some of British Columbia’s most unusual properties. “People have this idea that they can get away from it all, go paint up there, fix it up and you’re set for life. The reality is that it’s very very difficult.”

Whole towns for sale occupy lots of different legal positions, based on their history and what exactly is for sale. Each town has its own story, a totally unique path that brought it to the point of sale.

Often, when we talk about a “town for sale,” the phrase is more figurative than literal. Johnsonville, a town in Connecticut, recently attracted attention when it went up for auction, and later for a normal sale. A group of people on Twitter, loosely led by a Chicago-based writer and programmer named Dan Sinker, began trying to pool their money via Google spreadsheet and purchase the town back in April. Johnsonville is perhaps the least remote ghost town currently on the market, only about 30 miles from Hartford. It is beautiful, with airy but derelict colonial homes, including 19th-century barns, churches, and houses. It seems impossibly idyllic, a town that exists in our imagination as a perfect New England hamlet rather than a place you can buy.

There’s a reason for that.

Meagan Williams of RM Bradley, the real estate company that worked on Johnsonville the last time it was listed, in 2013, explained via email that nothing about Johnsonville is as it seems. The town of Johnsonville never really looked like this; it was an old mill town, but the way it looks now has no relation to any part of its history. “It is just a parcel of land within Moodus, Connecticut that is made up of buildings that look like an old town,” she writes. “The current owner collected old taverns, post offices, general stores and had them moved to his property. None of the buildings are currently in use.

Johnsonville was originally one of the twine-producing capitals of the world, back in the mid-19th century when an American town could produce something like twine in bulk. Like most of the other manufacturing centers in New England—New Bedford, the former whaling capital of the world, comes to mind—production eventually declined and much of the town, including a general store, was abandoned. In 1960, Raymond Schmitt, the CEO of AGC Corporation, an aerospace firm, purchased the “town,” really just a plot of land surrounding the old twine mill. But Schmitt wanted Johnsonville to look even more like a Victorian center of commerce, so he imported buildings, sometimes across state lines, to the town. That gorgeous Victorian stable? Yeah, that’s not a Johnsonville original. It was trucked over a few decades ago from Massachusetts.

For true ghost towns, you have to look westward. Swett, South Dakota is an unincorporated town about two hours by car from Rapid City. Swett’s current population is two, but it was never bustling; At its peak, in the 1940s, it had a population of 40. Currently the town consists of little more than a bar, a workshop, a few trailers, and a single house, all on 6.16 acres of prairie near the Nebraska border. “As the only watering hole in a 2-mile radius, the Swett Tavern is still the de facto gathering place for a small army of local cowboys and wheat-growers,” writes Daniel Simmons-Ritchie of the Rapid City Journal. Swett is a classic western ghost town: the Swett Tavern, to most of the country, looks more like a movie set than a bar.

But venturing further west, and north, leads to the most interesting ghost town of all. Northern Canada’s vast expanses of land are essentially empty of sizable towns, but they aren’t empty of natural resources. John Lovelace has worked in several places across British Columbia and neighboring provinces that he classifies as “single economic-use towns.” These were essentially company towns.

“Until about 1980, in resource extraction in this country, what they used to do was they’d create these towns and put in an infrastructure. They would have schools, and shopping centers, and bars, and everything else,” says Lovelace. The conglomerate finds some natural resource—for a long time it was gold, then uranium to sell to bomb-hungry Americans–and builds the mine or other extraction center. Then they’d construct some houses, some roads, and start moving people out to work in the mines. The province would then step in and introduce the utilities and institutions, like electric, gas, septic systems, hospitals, and schools. The miners typically, though not always, rented their homes from the company, which meant that many of these towns really were single-owner towns.

They were built quickly, but weren’t meant to be temporary. Nobody knew if the natural resources would run out, or when, and some towns grew to over 5,000 people. And then, inevitably, the resource would peter out, and the miners would move onto the next project. The mining companies would try to unload the towns to anyone who’d buy them, but without a population or any particular reason to be there, the towns quickly died.

Uranium City, a spectacularly-named town in northern Saskatchewan, was one of the biggest. “There’s uranium all over the world but the Americans needed stable supplies, so they ended up going to the Canadians and saying ‘we’ll give you a premium for this for 20 or 30 years, so we can build up our nuclear stockpiles,’” says Lovelace. With that kind of contract, Uranium City thrived until 1982, boasting an airport and even a local newspaper, The Uranium Times. But when the mines shut down in 1982, the city was abandoned as quickly as any other and sold off in pieces. Today it has about 201 residents. “The bears are roaming the streets now,” says Lovelace.

Lovelace recently completed the sale of a smaller town: Bradian, British Columbia. Bradian was originally a gold mining town with 22 homes, power and phone lines, and, says Lovelace, “really mild winters and beautiful summers, a coastal climate.” It’s about an hour drive from Whistler, one of the best ski resorts in the world—at least in the summertime, when crossing the treacherous Hurley Pass is easiest. (In the winter, it’s more like six and a half hours.) It reached its peak in the 1930s, but panic struck in 1971, when President Richard Nixon cancelled the convertibility of the U.S. dollar to gold. Suddenly no longer pegged to the dollar, gold prices plummeted, and the town collapsed. Thousands of residents left.

A few attempts were made to convert Bradian into a retirement community. Canadians, lacking hot-weather retirement spots like Florida and Arizona, often retire to the province with the mildest weather, British Columbia. The mining company, which owned the entire town, immediately sold Bradian to a developer. But Bradian proved too expensive and just a touch too isolated to make into the next Vancouver Island, and so was sold after the 1981 economic crash to a family who used it as a vacation spot. That family decided to unload it last year.

When trying to sell Bradian, Lovelace fielded dozens of serious inquiries from buyers; its proximity to both Whistler and Vancouver (the latter only four hours away), its many still-standing houses, and that it’s already on the electrical and phone grid makes it one of the most desirable ghost towns in all of Canada. But Lovelace was blunt about the condition of the town, which needs far more than a fresh coat of paint. “There’s a reason why we live in cities!” he says. “There’s a romance about [Bradian], but I tell people the same thing: know what you’re getting involved with.”

The town is not an easy fixer-upper, but earlier this year, Bradian was sold to a group of Chinese developers for around a million dollars.

It's Finally Summertime: 8 of the World's Coolest Swimming Pools