Why Calendars Are So Weird, and What Might Be Done About It - Atlas Obscura
Want to see fewer ads? Become a Member. 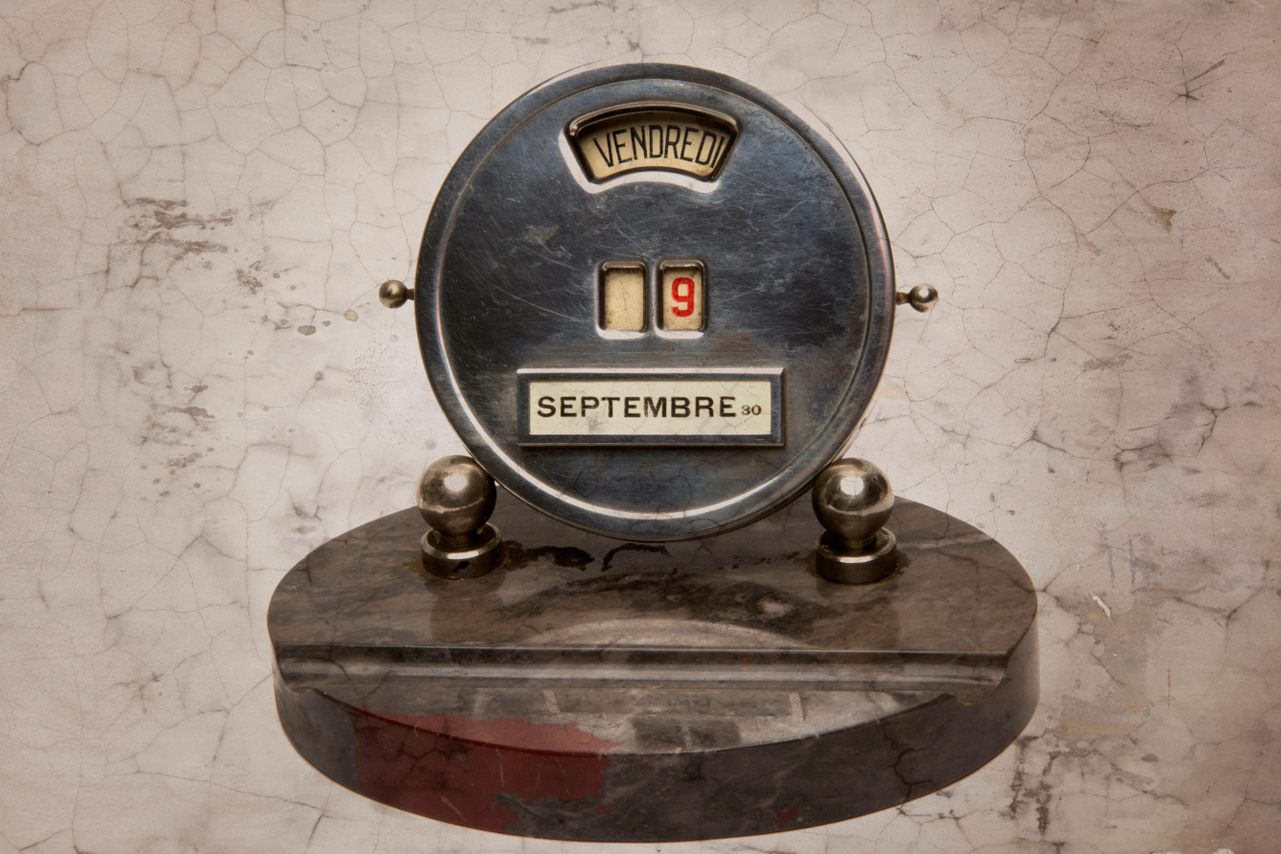 We've all gotten used to the strangeness of calendars, but some argue they don't have to be quite so strange. JBN-ART / Alamy

Calendars are fundamentally weird—after all, none of the many divisions of time we use can be accurately and consistently pegged to the movements of the Earth, Moon, planets, and stars. A day is pretty close to the actual time it takes the Earth to make one full rotation, but that varies based on where the planet is in its orbit, a few seconds either way. The week has absolutely no connection to anything; a month is a variable unit of time that we just sort of guess at. There are several different ways to measure the length of a year, and they’re all complicated by the fact that Jupiter’s gravitational presence makes that period of time waver no matter what you do.

It makes sense that there are now, and always have been, multiple ways to declare, name, and codify the date around the world—calendars, basically. In fact it’s almost bizarre that the current calendar most of the world uses is as stable as it is—it only dates back to 1582. But not everyone is content to sit back and just live with the fact that calendars are imprecise, ad-hoc, and often annoying. Some people are trying to change them.

Of the several calendars that are currently in use today, by far the most important is the Gregorian calendar, the one that was introduced in 1582. It’s a solar calendar, meaning that the length of a year is the time from one vernal equinox—the first day of spring—to the next. That length is 365.2425 days, and that nonsense after the decimal point is why we have leap years (as well as the irregularly spaced leap seconds). Even leap years are also more complicated than they appear; we get one February 29 every four years, except for the years that are divisible by 100 but not 400. The year 1900 didn’t have one, but the year 2000 did.*

Purely lunar calendars, like the Islamic calendar, divide up a year into 12 months of either 29 or 30 days, determined usually by the length of time from one new moon to the next. If you do the math, you’ll notice that this doesn’t add up to the length of a solar year. The Islamic months can occur at different times of the solar year, and it only lines up with the Gregorian calendar every 33 years. (Plus, it adds an extra day to each of 11 years in a 30-year cycle.)*

Then there are combinations of those two, called, boringly, lunisolar calendars. These, such as the Hebrew calendar, change the number of months in a year, which keeps the seasons in roughly the same place but can mean that a year has 384 days. That extra month is called Adar Aleph—First Adar—and comes before Adar Bet, or Second Adar, which appears every year.

Then there is the practical phenomena of fiscal calendars, like the one the United States government uses, which begins on October 1. This is mostly so that elected officials have time to create new budgets, so they’re not operating for their first years with someone else’s notion of how to spend money. Because the government is, you know, pretty big and influential, a lot of businesses operate on this fiscal calendar as well.

There is a bunch of problems with all of these calendars. One fundamental problem is that none of these divisions—weeks, months, years—divide cleanly into each other. And that means that each year must have an entirely new calendar, because December 25 can fall on any day of the week. Quarters—another division often used in business circles—also have different lengths, because the months aren’t equal. The first quarter has either 90 or 91 days (there’s the leap year again), the second has 91, and the third and fourth both have 92.

This screws up a lot more than one might think. An accountant working on quarterly profits, for example, must remember that the quarters aren’t equivalent—not to each other, or always from year to year. “From one year to the next, you can have big swings in the reported sales and profits of a company, and it’s just due to the Gregorian calendar,” says Steve Hanke, an economist at Johns Hopkins University, and also cocreator of the Hanke-Henry Permanent Calendar, which we’ll explain in a minute. “Analysts don’t always know this. There are sometimes big fluctuations in stock prices due to day counts.”

There’s no real reason this has to be the way it is, except for the perceived difficulty of changing it. There’s absolutely no reason for a solar calendar like the Gregorian to have four different month lengths—they’re arbitrary with respect to the cycles of the moon, and only one of them is cleanly divisible by a seven-day week.

Hanke is an economist—in one sense he’s a strange choice for cocreator of a new calendar, but in another, he’s the perfect guy for the job. The idea for his calendar arose from conversations between Hanke and Richard Henry (whom Hanke refers to as Dick), an astrophysicist also at Johns Hopkins. “Dick brought up this scheduling problem,” says Hanke. “Every year you have to make up a new syllabus, a new schedule, courses are all at different times.” Henry was also convinced that there are economic implications from all of this mess.

And he’s right. Just one example: Bonds have to use a period of time to pay out interest. Some base this on a month, say, from the first day to the last day. Because months are of different lengths, some bonds estimate a “month” to be 30 days. Invest in February, and you could end up with a couple of bonus days of interest. Sign up in July and you could face back-to-back months of being shortchanged a day of interest.

The economist and the astronomer created the Hanke-Henry Permanent Calendar, a variation on the Gregorian. It’s not wildly different, really. There are still twelve months, with the same names. There are still seven days in a week. But the number of days in each month are changed; each quarter has 30 days in its first two months and 31 in its third month (for a total of 364 days). Say goodbye to January 31 and hello to February 30.

This calendar is called “permanent” because in it each date falls on the same day of the week—forever. Christmas and New Year’s Day are both on Mondays. July 4 is a Thursday. This would obviate the need for the printed calendar industry. Hanke has suggested that you could paint a calendar on your wall, because you’d never need a new one.

Well, not quite. See, no matter what you do, there aren’t an even number of days or weeks in a solar year. There has to be a leap year of some sort, and a way to account for the slightly shorter Hanke-Henry year. To accomplish both of these, their calendar adds a whole new week, which they call Xtra, between December and January, every five or six years. This is not ideal, since it still messes with the lengths of quarters and the birthdays of the people born in this phantom week, but it is at least more consistent most of the time.

Hanke-Henry is just one of several proposals for calendar reform. Some posit 10 months, others 13, or a combination of 12 and 13. One, the World Calendar, proposes a worldwide holiday on two leap days. One falls between December 30—the last day of December in that calendar—and January 1, and the other between June 30 and July 1.

It’s probably also worth mentioning that the Hanke and Henry aren’t just interested in the date. They also propose eliminating daylight saving time, time zones, and even 12-hour clocks, so that when someone in Beijing looks at their watch, it says the same thing as the one on the wrist of someone in New York. It will mean something different—a 9-to-5 job in one place might be called a 19-to-3 in another.

These aren’t just intellectual larks. At least not entirely. Hanke is serious that his calendar has the potential to make scheduling and time-counting easier and cheaper, and is completely unfazed by questions about implementation. “It would be a lot easier than changing to the metric system,” he says, and we have some pretty recent data about how that went.

Canada began its switch to the metric system in 1970, and today the country uses both kilometers per hour and feet and inches. But there’s no widespread panic at being in some kind of measurement Twilight Zone. There was and still is opposition to metrication, but generally things are mixed up and just about fine, more or less? Hanke thinks adoption of their calendar would be about that smooth.

“The only industry that would be against it are companies that produce paper calendars,” he says.

* Correction: This story was updated to correct that 1900 did not have a leap day, but 2000 did, and to correct the addition of extra days in the Islamic calendar.

In the 19th century, the character embodied debates about women’s rights—and occasionally got a sleigh ride of her own.
vikings

The historian behind an online database of eccentric traditions has already visited more than 550 events.
clocks

The Long History of 'Bombay Time' and Resistance to Colonial Rule