The Key Ingredient in This Bread Is Reindeer Milk - Gastro Obscura 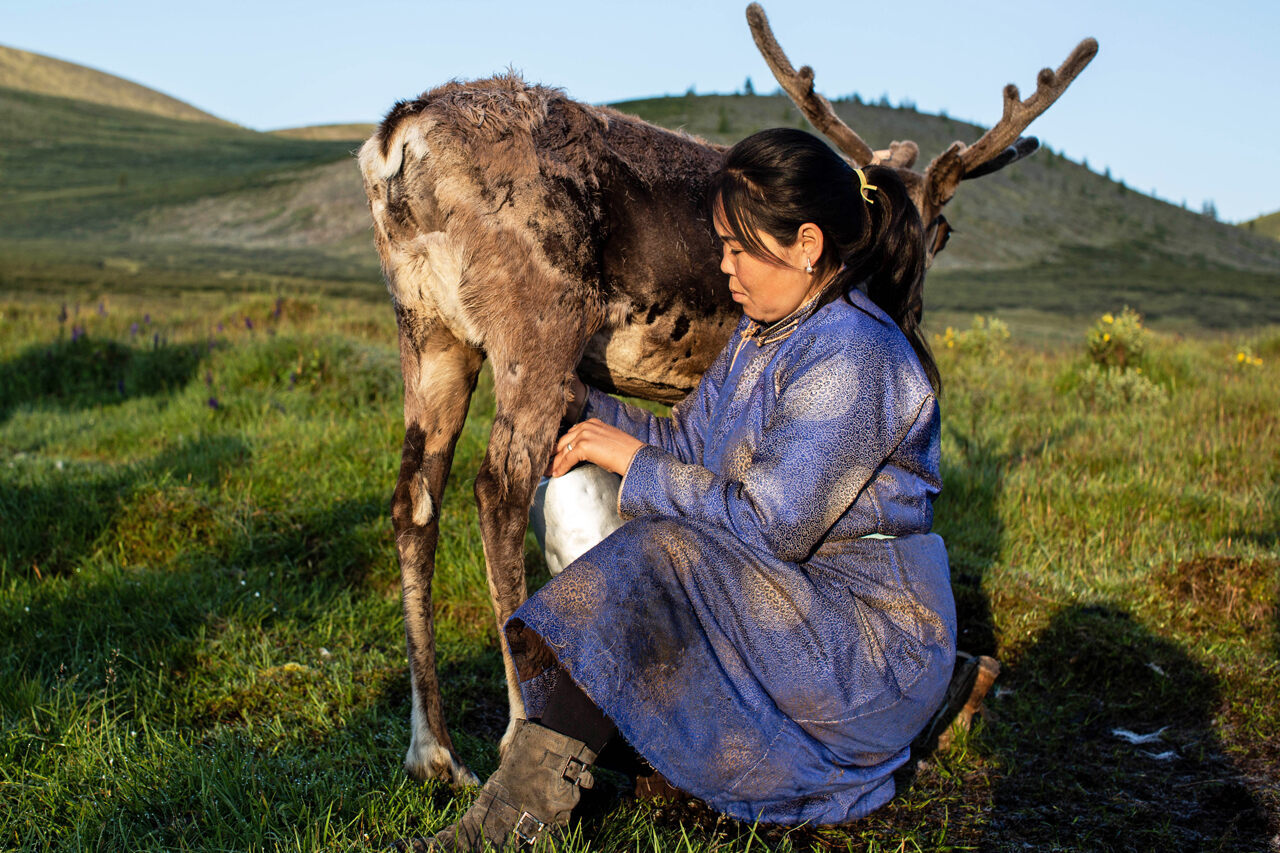 Otgontsetseg milking one of the reindeer in her herd. All photos by Breanna Wilson
In This Story
Destination Guide

It’s a sunny summer morning on the Mongolian taiga—a remote, high-altitude area bordering Siberia—but I’m wearing a winter coat. My host Otgontsetseg, though, doesn’t seem to mind the almost-freezing temperature. She’s wearing a winter deel, a traditional Mongolian garment that’s worn here year-round, and rises at 5:30 a.m. to do this every morning.

Otgontsetseg and her husband, father, and two children are one of 44 families left in the Tsaatan tribe, a nomadic group of herders in northern Mongolia whose name literally translates to “those who have reindeer.” And she’s up early to milk her herd.

Pail in hand, she heads straight for a young female that is staked furthest from her ger, an easily assembled and reassembled structure known elsewhere as a yurt, although up here they resemble teepees more than the traditional yurts found around Mongolia.

The herd is staked up for the night as protection from wolves—the family’s dog can guard them this way—and before letting the herd loose to graze in the surrounding mountains, Otgontsetseg needs to milk about eight to ten of the females so she has enough milk for the day. She crouches down and adjusts her deel, and the spray of milk against the pail rings loud in the morning silence.

Compared to cattle and other livestock, reindeer don’t produce much milk. So the jug that Otgontsetseg fills to the brim over the next hour is a precious commodity.

The Tsaatan rely on their reindeer for just about everything: food, fur, and even transportation. (Members of the tribe learn to ride reindeer as children.) But they never slaughter their reindeer, and they only eat the meat (and use the hide) if the reindeer has died from natural causes. Instead, they add their milk to their tea and use it to make cheese and bake bread—a deliciously moist and dense loaf that’s offered at just about every meal. While nomadic families across Mongolia make bread in their gers, this is the only place where it’s made with reindeer milk.

After the morning’s milking, Otgontsetseg makes tea, prepares breakfast, and gets her kids dressed. Once that’s done, she’s excited to show me how she makes the bread she’s seen me enjoy so much. She knows I can’t resist it, and smiles each time I go for a second or third piece.

The ingredients are a touch of reindeer milk with flour, salt, yeast, and water. The water came from a small river not far from the ger, but Otgontsetseg rode for a full day (on reindeer) to buy the other ingredients in the nearest soum (village). So they have to be carefully rationed.

The family’s situation is unusual, but it’s not exceptional for Mongolia, a country where 25 percent of the population still lives a traditional, nomadic lifestyle. Historically, the country has been sparsely populated by nomads who move to avoid overtaxing the grasslands—a result of Mongolia’s unique geography, which cannot support much agriculture and farming. In recent years, modern conveniences, as well as droughts, have drawn or pushed nomads, including reindeer herders, to towns and cities. But families like Otgontsetseg’s can’t imagine any other way of life.

Otgontsetseg switches into an automatic rhythm of motions, straining the reindeer milk through a sieve before adding water, carefully measuring everything by sight. Following the recipe she learned, like every woman in the tribe, from her mother, she adds flour, yeast, and salt into a pot that’s been in her family for more than 20 years.

Now that I’m a more familiar presence in her home, Otgontsetseg is opening up. She gestures as she bakes, motioning across the language barrier, and explains through an interpreter how she’ll start teaching her daughter (now six) these baking techniques once she turns nine.

While Otgontsetseg mixes the dough by hand, using the ground as her makeshift table, she explains the importance of the size of the dough. If it’s too large, it has to be baked differently, using the embers of the fire to cover the top of the dough and cook it all the way through. But luckily for us, today’s loaves—she’s made enough dough to bake two of them—are perfectly proportioned. We let the dough sit and rise before moving it to the stovetop to bake for 15 minutes on each side.

It’s a simple process, but Otgontsetseg stays busy. While she bakes, she manages the children, chats with neighbors, and boils reindeer milk to make cheese. For the reindeer-milk cheese, she reduces the milk for 30 minutes, until it starts to form clumps and harden, and sets aside the reduced milk to cool before transferring it to a cheesecloth and straining out the remaining liquid. From there, she and her husband, Ganbat, press it into its final shape.

The cheese has to dry and harden for a day (the almost-parmesan-like cheese is absolutely worth the wait), but once the bread cools, it is ready to eat. On the same board that she just used to mince mutton for a noodle soup, Otgontsetseg cuts the bread and passes it around for everyone to taste. Otgontsetseg and Ganbat cover their pieces in a layer of sugar, which is common here. But I eat mine plain, because I want to taste this bread for exactly what it is: the only bread in the world made with reindeer milk.

It's not just bread; it's a way of life.
farms

The Small Goat Breed That’s a Star of Urban Farms

“If you’re thinking about getting a dog, maybe get a goat instead.”
food

Make bread fit for a pharaoh and a sweet treat out of tiger nuts.
Video • Gastro Obscura

Join us for a daily celebration of the world’s most wondrous, unexpected, even strange places.
Read more
Thanks for sharing!