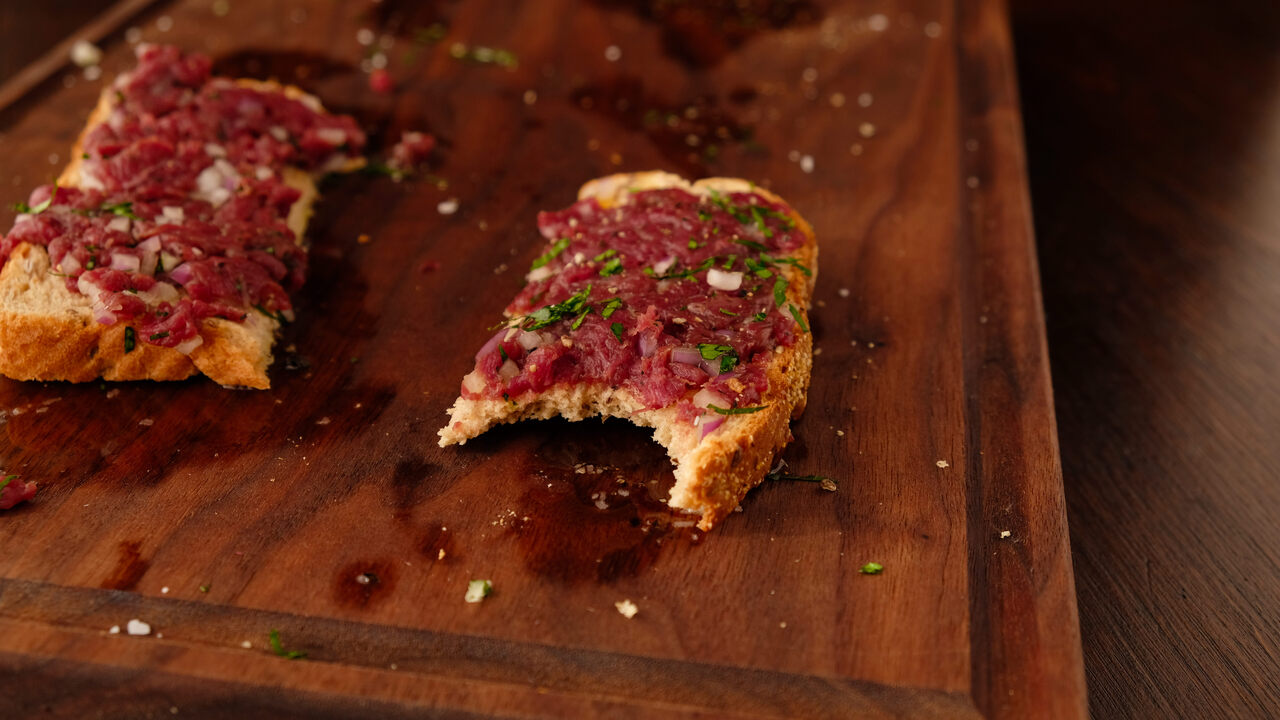 The Elevated Wild team calls their cannibal sandwiches the Jack London, in honor of the author's devotion to them. Courtesy of Elevated Wild
In This Story
Destination Guide

Jessica Sutton didn’t know there was anything unusual about her family’s holiday tradition until she started bringing boyfriends home for Christmas. She grew up on a farm with strong German roots in Howards Grove, a small town in southeastern Wisconsin. To her Christmas Eve always meant performing “O Christmas Tree” in German at the church Christmas pageant by candlelight, followed by “a little Christmas gathering of the immediate family where we had cookies, nuts, and, of course, cannibal sandwiches.”

Also known as tiger meat or wildcat, cannibal sandwiches are a longtime Wisconsin tradition. Although the name implies something much more sinister, the sandwich typically consists of raw beef, spices, and a hefty helping of raw onions served open-face on rye bread or crackers. “We always had two kinds of bread, rye and white, since us kids were picky,” says Sutton.

This isn’t the type of dish you prepare from pre-packaged grocery-store ground beef—you get the meat from your trusted local butcher, if not butcher your own cow for the occasion. The idea is to get the freshest and leanest beef possible, and in the past, when many early Wisconsin settlers raised their own animals, they ground the meat fresh at home.

“To me, there is not much flavor to the meat,” says Sutton. “It was more of a texture thing. The soft bread, the softness of the meat, and then the crunch of the onions.” It’s delicious, she says, but can be hard to explain to those who haven’t grown up with the custom.

The Wisconsin Department of Health now has a tradition related to cannibal sandwiches, too: Pleading every year that Wisconsinites not eat them. “For many Wisconsin families, raw meat sandwiches are a holiday tradition,” the department tweeted recently, “but eating raw meat is NEVER recommended because of the bacteria it can contain.” The warning was accompanied by an unappetizing photo of raw ground beef topped with raw onion and a sprig of parsley that went viral on social media.

No one knows exactly where the sandwich came from. Some believe it is a variation on the Belgian and German raw-pork dish mett, concocted by German immigrants who settled in the southeastern region of the state. A version with raw onions called zwiebelmett seems to be the likely inspiration for the holiday dish. Others point to Scandinavian immigrants. Regardless, cannibal sandwiches have been a holiday treat in German, Polish, and other European communities in Wisconsin since the 1800s, and health department authorities have stepped up their warnings about them in recent years.

While unusual in mainstream American dining, many cultures eat raw meat. Cannibal sandwiches are very similar to steak tartare, a traditional French dish made from raw ground beef seasoned with capers, chives, and shallots and often topped with a raw egg. Raw meatballs, çiğ köfte, are popular in Turkey and Armenia; Italians love carpaccio, their thinly sliced raw-beef sirloin appetizer, and kitfo, made from raw minced beef, is a celebratory food in Ethiopia. So why can’t Wisconsinites have their cannibal sandwiches once a year?

According to McGill University’s Office for Science and Society, food poisoning from raw dishes such as steak tartare is rare because they are “usually served only in high-end restaurants where hygiene is the rule and the meat is supplied by reliable butchers.” But health experts advise cooking ground beef to 160-degrees Fahrenheit—especially in the case of less-knowledgeable home cooks—since it ensures all harmful bacteria are killed. No matter who prepares it, consuming raw meat increases your risk for ingesting bacteria such as Salmonella and E. coli, which can lead to foodborne illness. Since 1986, the Wisconsin Department of Health has identified eight outbreaks linked to eating raw beef.

Al Pipping, a butcher at Brandon Meats & Sausage, located in the tiny town of Brandon and famous for its five-foot summer sausage, agrees with health experts that you should never eat raw meat. But enough people ask for cannibal-sandwich meat around the holidays that he prepares it pre-seasoned with onion and pepper. “We take top raw steak and take all the fat off of it and grind it straight so it’s really lean,” says Pipping.

According to Pipping, it’s mostly the older generation who eats cannibal sandwiches. “They’ve been doing it for so many years already and haven’t seen any ill effects,” says Pipping. “It’s younger people that are a bit more wary and believe their meat should be cooked.” He stresses that meat should always be cooked, but also that he can’t control what people choose to do with his meat in their own home. He also admits to indulging in the dish himself over the holiday season.

When I ask Sutton if her family will partake this year, despite the warnings, she replies without hesitation. “My mom called me this morning to tell me that she already picked up the meat.”

The Masters has it all—except its missing original pimento cheese recipe.
mathematics

If only there were a cookie-cutter solution.
holiday

Lismore's festive trees are made out of glorious garbage.
Video • Wonder From Home

The oldest continuously-operating tavern in Wisconsin used a clever loophole to serve alcohol during Prohibition.
Want to see fewer ads? Become a Member.
From Around the Web
Related

The truth is out there.
Read more
Thanks for sharing!