Every Year, This Italian Town Hand-Delivers Salt to the Pope - Gastro Obscura
Want to see fewer ads? Become a Member. 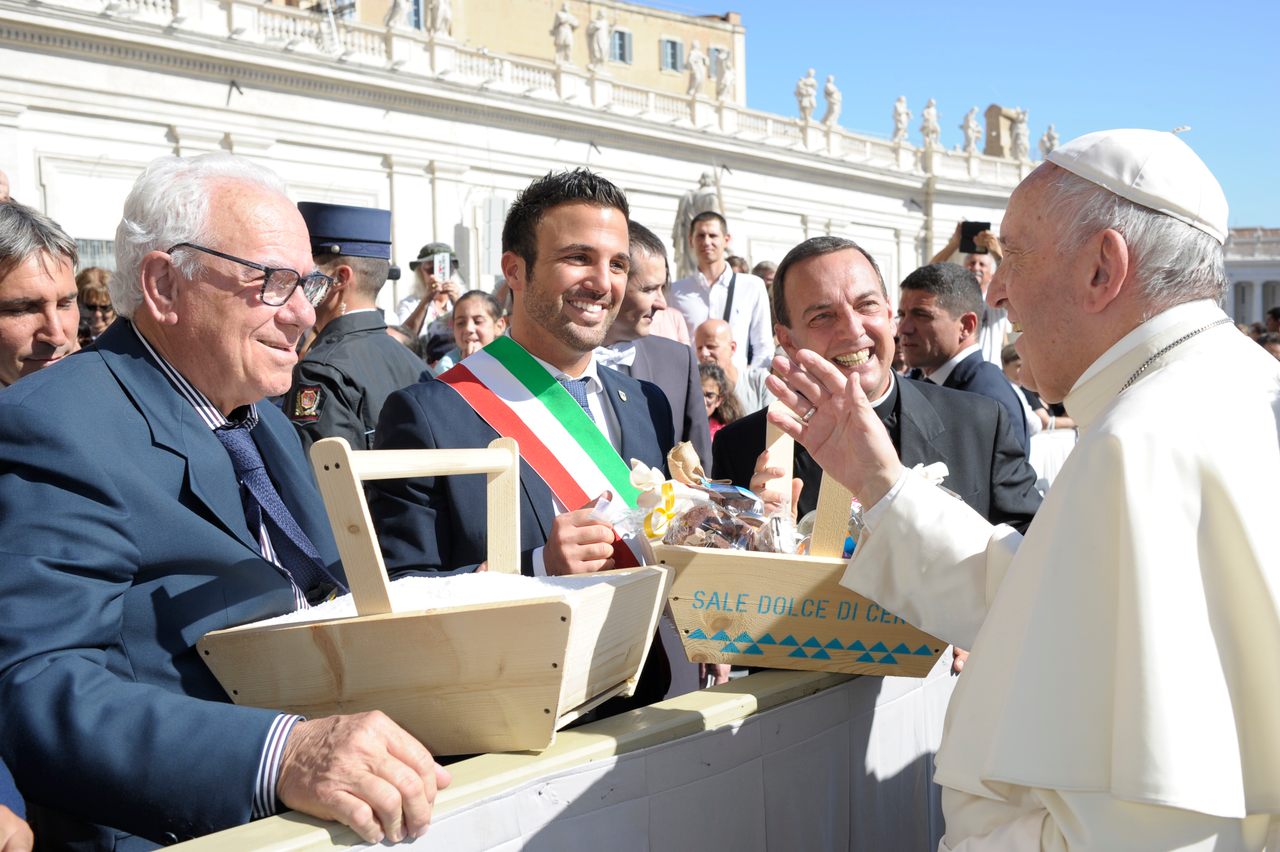 On the Adriatic coast of Italy, under the hot sun, shirtless and barefoot as is the tradition, Oscar Turroni moves a long rake over a pool of water, separating salt from water and mud and pushing the salt into a mound in a crystallizing pond. There, the water will evaporate, leaving a gleaming mountain of crunchy white salt that Turroni will take to a burchiella, a flat-bottomed barge somewhat like a gondola, that will transport it across shallow lagoons to storehouses.

Since 1974, Turroni has been a salinaro, or salt picker, at a salt pan in the little town of Cervia, whose multi-tiered salt-harvesting system goes back to Roman, or perhaps Etruscan, times. The salt that Turroni and his fellow salinari harvest, Cervia Salt, is one of the purest on earth, with a singular, almost maddeningly sweet first taste on the tongue.

The salt’s exceptional quality and sweet taste has made it a coveted product, essential to local cuisine. Coupled with some long-standing papal geopolitics, it has also earned it the honor of being the pope’s salt, hand-delivered to him every year.

Salt has an important and complicated history in Italy—it’s been the cause and casualty of endless wars. Little Cervia usually found itself, and its salt, at the center of most of them, its salt pans in turns sidelined, under the thumb of, or exploited to the point of exhaustion by rivalling states and the Catholic church.

Whenever the Papal States took control of a region, its citizens were usually subjected to ruinous salt taxes. One of the outcomes, according to an unproven story, is the unsalted bread still used in Tuscany and Perugia; as part of a popular protest against the new papal tax in 1540, these regions stopped putting salt in their bread. Dante even referenced this in the Inferno: “Quanto sa di sale lo pane altrui.”

But when Cervia became part of the Papal States, its salt became “Il Sale dei Papi, salt of the pope,” says Letizia Magnani, author of Dolce come il Sale (Sweet Like Salt), a history of Cervia Salt. In 1444, Cardinal Pietro Barbo offered a “flower of salt” to Pope Eugene IV, his uncle, to thank him for his appointment as bishop of Cervia. When Cardinal Barbo himself became Pope Paul II in 1464, he dictated that Cervia would continue being the official supplier of salt to the Papal table. (This naturally also helped ensure Cervia’s wealth.)

Depending on relations with Rome, the tradition stopped and started over the next few centuries. Most recently, Bishop Mario Marini, who served in the Pontificate of John Paul II, superintended the revival of the tradition in 2003.

Just like terroir shapes wine, the sea and its surrounding environment shapes the flavor of salt. “It’s important to know how much terroir plays into salt,” says Francine Segan, a food historian. In 2015, Segan was a judge at the Sofi Awards, the so-called Oscars of the food industry, where Cervia Salt was a nominee. “We said: ‘Wait. What are the ingredients of this? Oh, it’s just salt?’’’ she says. “It was so delicious. I said I’ve got to learn more about it.” Segan later went to Cervia and joined a group of salinari, who come in the second week of September to celebrate the Armesa de Sel, or Stocking of Salt, a festival celebrating the end of the salt-production season, which calls for a parade of burchiella taking the salt to the stocking sites.

That scene had almost been relegated to history. Up until the late 1950s, each salinaro was responsible for a specific area of the salt pans, where he lived and worked with his family. In 1959, the system became industrialized, using a conveyor belt-like system and evaporation tanks to collect the salt from Cervia’s 144 salt pans, which were transformed into one. While this more industrially harvested salt has all the characteristics of the salt harvested in the ancient method—sweet and transparent medium-size crystals—traditions dating back thousands of years were broken: the wood equipment, burchiella boats, and sight of families taking care of their salt pans.

But in 1980, a group of passionate salinari brought one of Cervia’s ancient salt pans back to life. Today run by a volunteer group of descendants of salt pickers, the Camillone salt pan uses only the traditional multi-tiered method, including collection by hand. These volunteers, Turroni says, wanted to pass on the “incredible heritage of this land and ecosystem.”

It is this salt that goes in the papal gift basket—a tradition revived by Cervian dignitaries, who take a basket of the first salt of the harvest to Rome and hand it to the pope in person. (This papal salt is specially sifted to obtain finer grains than the typically chunkier Cervia crystals.) The officials are accompanied by pilgrims who recreate the four-century tradition of salt workers journeying on the back of mules to bring this white gold to the Vatican.

Cervia Salt is also essential to two of the region’s biggest culinary claims to fame. Prosciutto di Parma has only two essential ingredients, salt and pork, so Antica Pieve Prosciutto di Parma’s slightly sweet tinge owes much to Cervia Salt. Similarly, Vacche Rosse, the 800-year-old Parmigiano Reggiano cheese made from “red cows,” is only made with Cervia Salt, which provides its signature, slightly sweet flavor.

And even if you’re not the pope, you can still find Cervia Salt for sale in stores around Cervia and sprinkled on menus in restaurants that range from fine-dining establishments to seaside shacks.

Indeed Emilia-Romagna as a region is home to “179 Michelin restaurants, and every single one of them has at least one, if not five or six, dishes that highlight Cervia Salt,” says Segan. (She is referring to the number of establishments written up by the guide—not those that received Michelin stars.) Meanwhile many piadini stands, or flatbread-sandwich kiosks, around Cervia offer a wrap whose porchetta is cured with Cervia’s salt, as well as Salinae, a local beer made with the salt. Liquor shops sell a gin with Cervia Salt. A chocolate shop offers bars made with the sweet salt of Cervia and no sugar. And in the homes of Cervia’s salt workers, food is cooked on a mattonella di chef, or a hot salt tile. After being heated in the oven, the tile is brought to the table to cook fish or meat on.

Cervian salt workers also opened MUSA, the Cervia Salt Museum, in one of the town’s ancient salt warehouses. There, on-site salinari answer questions about the salt-harvesting process and the ancient mining tools on display. They just won’t tell you the pope’s favorite salty snacks.

Trade wars, papal rebellion, or salty hams. Why does central Italian bread have no salt?
food

In the 1970s and 80s, when the guards stepped away, the pots and flames came out.
Video • Wonder From Home