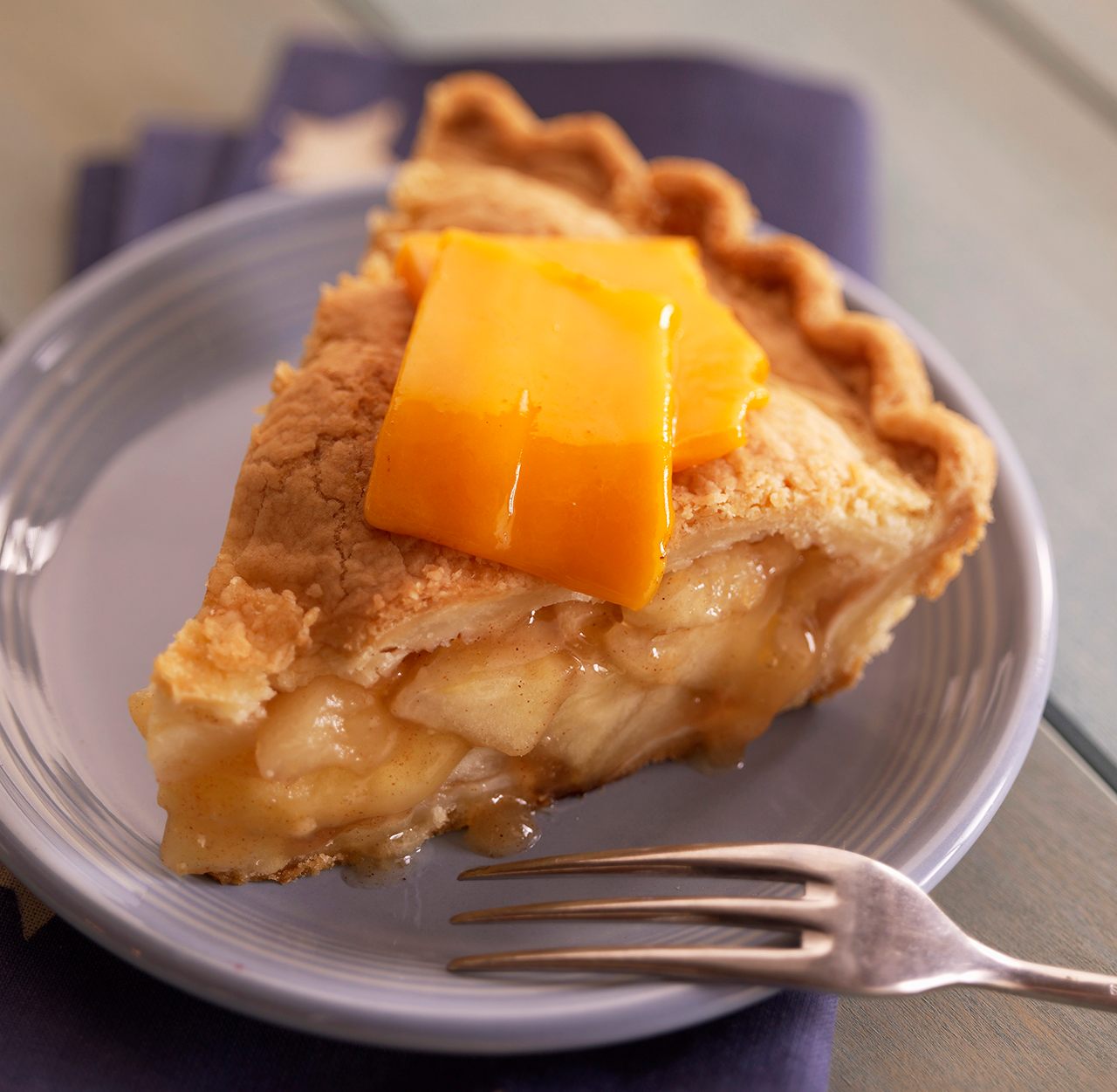 Apple pie is not an American invention. In the 14th century, farmers in England began wrapping apples into inedible containers known as “coffins,” a pie prototype. Only in 1697 did the concept reach the United States—through European immigrants.

But the USA has laid claim to the iconic dessert, a process that was crystalized when a 1902 New York Times article lambasted an English writer for complaining that eating apple pie more than two times per week was excessive:

[Twice a week] is utterly insufficient, as anyone who knows the secret of our strength as a nation and the foundation of our industrial supremacy must admit. Pie is the American synonym of prosperity, and its varying contents the calendar of changing seasons. Pie is the food of the heroic. No pie-eating people can be permanently vanquished.

But even in the United States, apple pie has its regional variants—and, inevitably, detractors of those variants.

This is going to completely shock a number of apple pie fans and elicit an “of course” from a whole slew of others, but: a lot of people put cheese, specifically a sharp cheddar, on their apple pies.

The tradition has silently polarized the nation, with some, like author John T. Edge, confessing, “at lunch or dinner I thought a wedge of pie was naked if it wasn’t crowned with a preternaturally orange slice of cheddar.” The poet Eugene Field (1850-1895) once wrote, “But I, when I undress me / Each night, upon my knees / Will ask the Lord to bless me / With apple pie and cheese.” There is even a saying, popular in many circles: “An apple pie without the cheese is like a kiss without the squeeze.”

Meanwhile, another faction has lamented, “Why would anyone choose to crown their apple pie with stinky old cheese when they could have a scoop of ice cream melting on top?” In 1998, a reader of the Los Angeles Times complained that “[a column] about cheese and apple pie left me feeling like I live in the twilight zone… I have so far never encountered American friends or acquaintances who even want to try this.” When asked whether he ate pie with cheese in his home state of Mississippi, one chef said: “Oh, God no! They’d put you away in a home.”

Proponents of apple pies with cheese defend their choice by pointing to the contrast between “the sweetness of the pie” and “the sharpness and saltiness” of the cheeses, saying it works the same way as chocolate-covered pretzels.

There are many ways to prepare it: some people bake cheese into the pie crust, some slip it into the apple filling, some melt it on top of the pie, and others leave it on the side of the plate. Though in the United States, cheddar is the favorite, many types of cheese can be used. Recipes may call for Wensleydale, Roquefort, gouda, parmesan, or Gruyère. The ABC show Pushing Daisies featured an iconic scene in which Ned, owner of a restaurant called The Pie Hole, prepares an apple pie—with Gruyère in its crust—for his girlfriend’s aunts.

Though fans of apple pie with cheese exist everywhere, they seem to be concentrated in the American Midwest, New England, and parts of Canada and Britain. Vermont even has a 1999 law on the books requiring that proprietors of apple pie make a “good faith effort” to serve it with ice cream, cold milk, or “a slice of cheddar cheese weighing a minimum of 1/2 ounce.” In some circles, apple pie with cheese is tradition.

So where does this come from? And why, especially in the United States, do some people expect apple pie with cheese, while others have never even heard of the concept?

The idea appears to have originated in England, where all sorts of fillings were added to pies. At some point, the 17th-century trend of adding dairy-based sauces to pies morphed into a tradition of topping them with cheese. For instance, in Yorkshire, apple pie was served with Wensleydale, which is likely how the phrase “an apple pie without the cheese is like a kiss without the squeeze” began. (Though it is in dispute whether the phrase originated in the United States or England, it caught on in both places in the 19th century, suggesting a kind of cultural collaboration between the two.)

According to The Mystic Seaport Cookbook: 350 Years of New England Cooking, New England settlers brought the idea behind these Yorkshire pies with them, but instead of Wensleydale, they began using cheddar.

Why cheese? At the time, apple pies were quite bland: prior to the creation of the Red Delicious apple in the late 19th century, few apples tasted sweet. Cheese offered a readily available supplement. After all, in an era before the ubiquity of freezers, the most popular pie topping today—ice cream—was out of the question.

Places in the United States with heavy concentrations of dairy farms therefore became centers of the cheese-on-apple-pie craze. These included New England, Pennsylvania, and especially the Midwest—largely the regions where cheddar cheese apple pie is popular today.

Regions that pioneered pie a la mode, meanwhile, largely lost the trend: New York City, for instance, has served the dish since the 1890s, and today generally falls into the “pie with ice cream” camp.

During the 20th century, ice cream gradually usurped cheese as the most popular pie topping in the United States at large. But the cheese-on-pie love has endured. So beware: Whether you serve your apple pie with cheese or without it, you might get some funny looks.

They're In: Your Stories About Cheese on Apple Pie

The mention of cheddar-topped desserts brought back fond memories—and some outrage.
food

Sin eaters risked their souls to soak up the misdeeds of the dead.
food

For the Great Eater of Kent, it was all ale-soaked bread and wheelbarrows of tripe.
science

How resourceful home bakers managed to make dessert from practically nothing.
Video • Wonder From Home