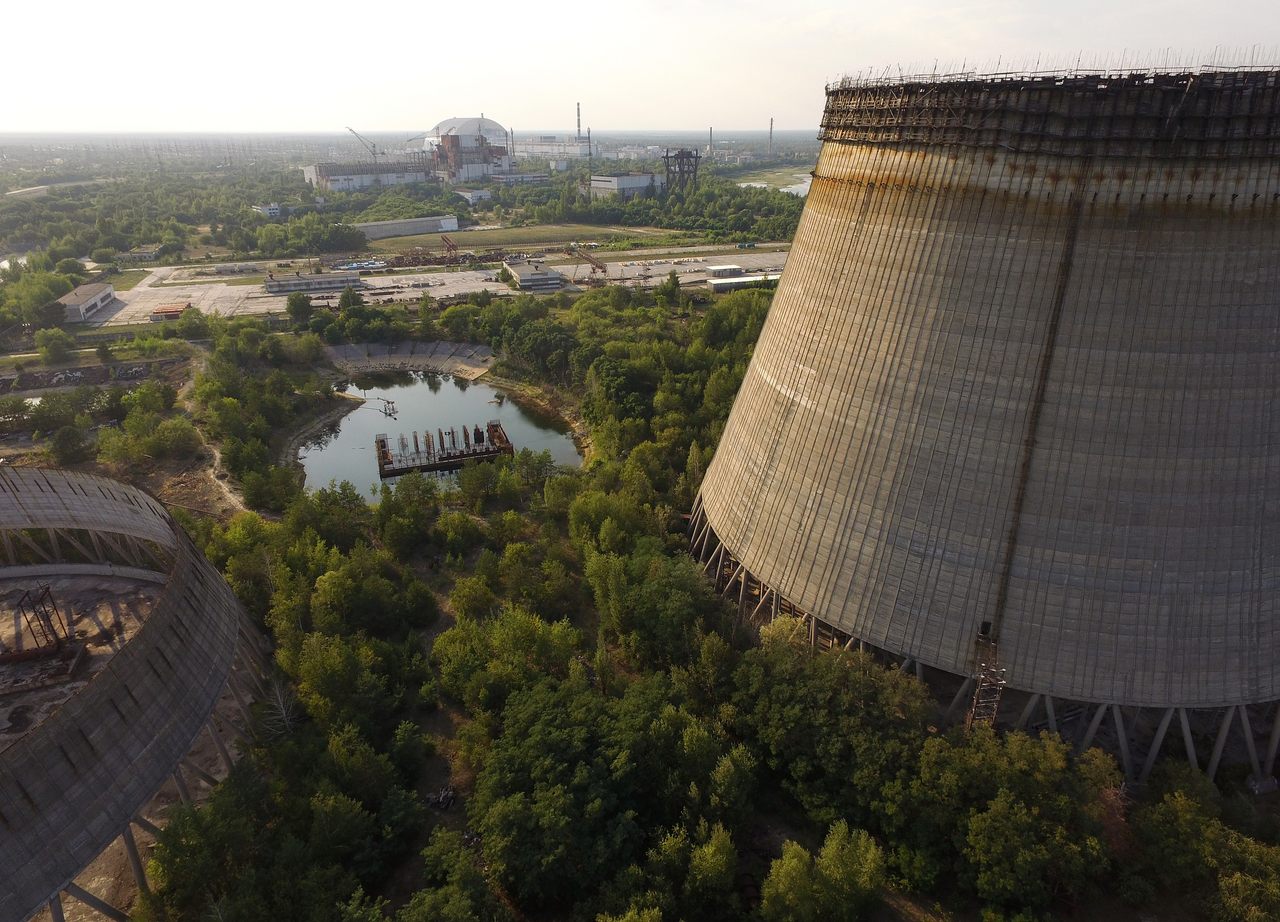 Partially built and abandoned cooling towers at Chernobyl, with the "sarcophagus" in the distance, 2017. Sean Gallup/Getty Images
In This Story
Destination Guide

On Thursday, February 24, 2022, Russian troops descended on the Chernobyl Exclusion Zone in northern Ukraine. The defunct power plant—still undergoing cleanup and decommissioning—was overtaken by the invaders and the employees held hostage. By the end of March, the International Atomic Energy Agency (IAEA) has confirmed that Russian troops have pulled out, and is sending experts to assess safety and security there.

It has been a harrowing time for people who know the site well. On the day the plant was seized, shells were falling on Tatiana Tugai’s home city of Kyiv. “Explosions are constantly heard,” she wrote in an email that day. Even then, her thoughts turned to Chornobyl, as it is known in Ukrainian, where, decades ago, she and a team of scientists had conducted groundbreaking research in the aftermath of the 1986 disaster—research that continues to be relevant in surprising new ways today.

In the decades between what most scientists call the worst nuclear meltdown in history and the Russian invasion, the ruins of Chernobyl and the contaminated land around it have been managed and studied. The most radioactive areas are contained within a stadium-sized steel sarcophagus. However, the war could still lead to leaks, new plumes of radioactive dust, or worse. In fact, Ukrainian officials report that radiation levels increased directly following the invasion, and the IAEA is investigating whether Russian soldiers experienced radiation poisoning during their occupation.

Over the years, wildlife has adapted to life in the exclusion zone, the area around the plant where access to visitors is heavily restricted. It is one of the few places on the planet where researchers can study the effects of radiation on nature, and it has yielded many discoveries—including, in Tugai’s case, revelations about a particularly extraordinary kind of fungus.

Five years after the disaster, in 1991, remotely piloted robots discovered a jet-black fungus growing on the inside of the reactors. Intrigued, a team of microbiologists from the Kyiv Institute of Microbiology and Virology began visiting the area regularly.

“The first impressions from my personal trips to the Chernobyl zone were very sad,” wrote Tugai. “[The zone] resembled frames from a science fiction film about a dead city. Empty houses without windows.” As years went by, life began to come back, and “the closed exclusion zone gradually began to look like a nature reserve,” she added. But the scientists “constantly walked with a dosimeter, and it reminded us that radiation was nearby.”

Conditions were especially treacherous close to the remains of the damaged reactors themselves. “It was only possible to be directly there for a very short period of time,” Tugai wrote. “Therefore, the first samples taken from the walls and water from the interior of the destroyed fourth block … were selected for further research.”

Across dozens of visits in the 1990s, Tugai and a team led by Nelli Zhdanova found more than 200 fungal species at the site, including jet-black fungi with melanin, a pigment that, among other things, influences the color of human and animal hair, skin, and eyes, and can protect against ultraviolet light. At the Institute for Nuclear Research of the National Academy of Sciences of Ukraine, the scientists began to study the fungi’s ability to thrive around extreme radiation.

Tugai’s team hypothesized that the “melanized fungi” they found might be growing successfully because of the way melanin interacts with radiation. Their research confirmed the theory, and found that ionizing radiation altered the structure of melanin molecules in a way that encouraged those fungi to grow faster than identical samples that were not exposed to radiation. And the closer the fungi were to the source of radiation, the more melanin they expressed. In short, the black fungi were not only growing in spite of radiation; they were changing and growing because of it.

Additional research by Tugai, Zhdanova, and John Dighton of Rutgers University found that fungal bodies containing melanin were actually drawn to radiation. Berkeley National Lab microbiologist Tamas Torok describes this phenomenon, known as positive radiotropism, as “the capability of fungal organisms to sense radioactivity and grow directionally toward the radiation source.” Torok, who had samples of these radiation-resistant fungi in his lab for years, notes that the process isn’t really analogous to metabolism or photosynthesis, but is another form of energy conversion.

An American team of researchers helmed by Ekaterina Dadachova and Arturo Casadevall of Albert Einstein College of Medicine of Yeshiva University acquired some samples of their own. Their findings confirmed the Ukrainian team’s conclusion that melanin was behind fungi’s unique ability to thrive with radiation. “We began to expose the fungi to radiation. What we noticed was they would grow faster, and this was associated with melanin,” Casadevall says. “If they didn’t have melanin, you didn’t see the effect.”

The implications of this research are potentially cosmic. In 2016, SpaceX and NASA sent melanized fungi into space to see if it could mitigate radiation there. Per a study published in bioRxiv in 2020 that is currently undergoing peer review, the fungi could cut radiation levels in space by about two percent, which could potentially “negate the annual dose-equivalent of the radiation environment on the surface of Mars,” making it easier for astronauts to live in space.

Melanized fungi could also play a critical role here on our planet. Further research led by Dadachova has proposed that the unique relationship between fungi, melanin, and radiation could provide new insights into ways to reduce radiation and generate energy in a warming climate. And, of course, it could help in the case of another nuclear disaster. “To date, a significant amount of [radioactive] hot particles have already decomposed under the action of soil fungi,” wrote Tugai. “This indicates that microbiological processes can play a decisive role in the processes of destruction and migration of radionuclides in the environment.” While Torok notes that radiation cannot be completely bioremediated, or removed from the environment by biological action, fungi can indeed help immobilize some of it. As concern about the fate of Chernobyl persists, unique solutions could still be necessary.

All the while, fungi continue to grow inside the reactors and in the radioactive soil around them. When she first visited the exclusion zone, Tugai noticed that while most of the soil had been cleared of the majority of radiation through brutal, labor-intensive cleanup, “no one touched the soil on the territory of the cemetery,” where “the level of background radiation is still dozens of times higher than the norm.” When radiation first hit the area around Chernobyl, it caused some of the pines in and near the cemetery to turn red, creating the infamous Red Forest, which later became a burial ground for particularly radioactive tree trunks. Over the years, new trees have grown amid the graves, and birds now fly and sing in their branches. Deep in the soil, webs of fungi pass signals through roots as they “alchemize” radiation, transforming it into something new.

Though the damage on La Palma in the Canary Islands is extensive, no lives were lost.
disasters

After 14 months on the ISS, the vintage Petrus could be yours.
Video • Gastro Obscura