How a Village United to Save Cinque Terre's Ancient Terraces - Atlas Obscura
Want to see fewer ads? Become a Member. 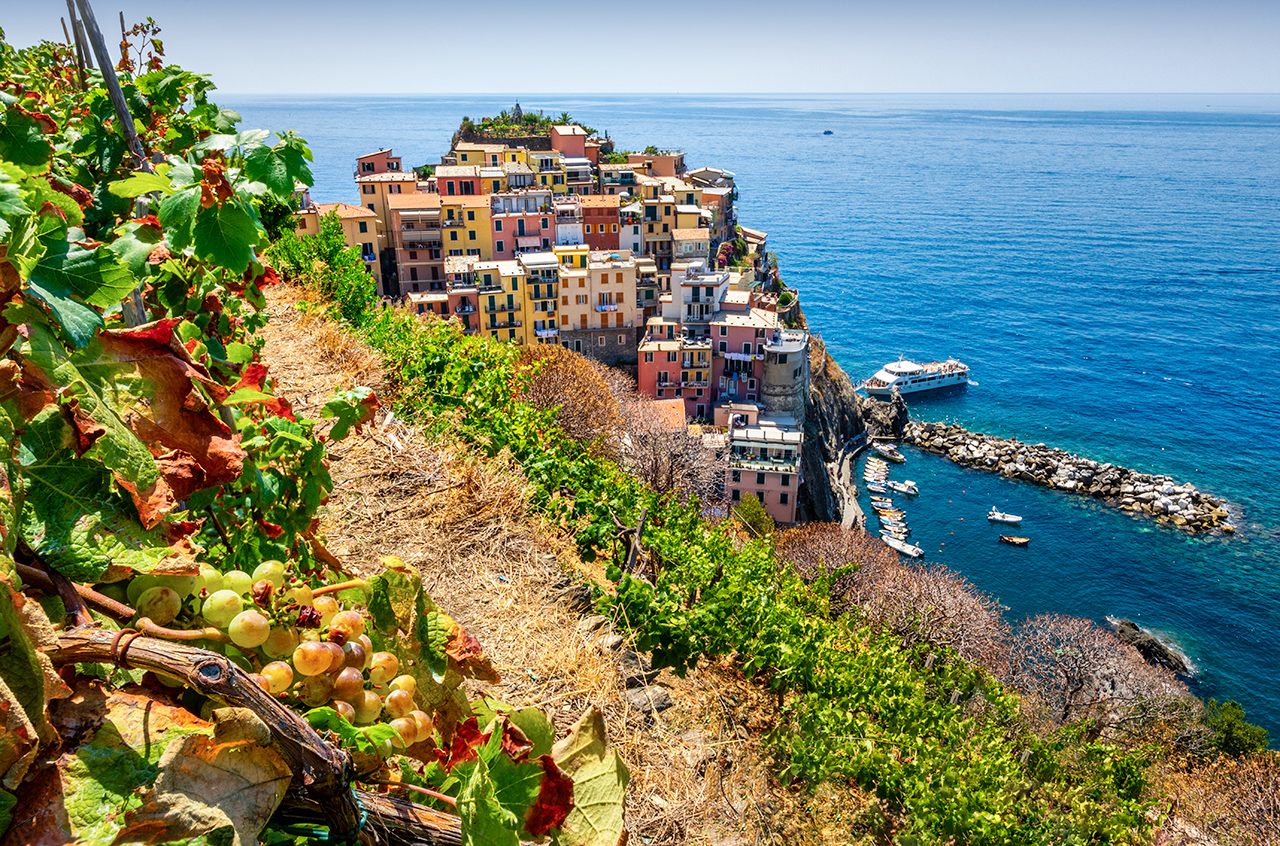 Overlooking the Ligurian Sea in northwestern Italy, the village of Manarola is flanked by terraced vineyards. Eloi_Omella/Getty Images
In This Story
Place

On the terraced, steep-sided hills the locals call the Amphitheater of the Giants, Alessandro Crovara takes the monorail to work. Unlike the sleek, single-track trains cruising through cities the world over, the monorails in this corner of northwestern Italy are old tractors that pull flatbed wagons slowly along a narrow metal rail, carrying farmers and their equipment and, at harvest time, boxes and boxes of grapes. Crovara tends vines in small terrace parcels that, in total, equal the size of a single soccer field. In one plot, he grows Vermentino grapes; in another, he hopes to plant Bosco soon. The two varieties of grape, along with a third, Albarola, are synonymous with this coastal area, Cinque Terre, and are as much a part of the region as the ancient terraces.

Operating the monorail on his own, Crovara stops it near a concrete shrine overlooking the Ligurian Sea and the hamlet of Manarola. He steps down from the tractor seat to check on his Vermentino. He obtained the small parcels of land in 2016; owned by local families for generations, they had fallen into disuse. It took a tragedy, and fear of more devastation, to begin bringing them back to life.

“Cultivating the land is hard work here,” says Marta Bonfiglio, whose family owned one of the parcels Crovara now manages. She remembers last harvesting grapes from the family plot in the early 1990s, her knees “shouting” from the long hours of labor, she says. Before the monorail system arrived in the 1980s, people went on foot up and down the steep hills and narrow stairs of the terraces with baskets full of grapes on their heads.

For centuries, locals in Cinque Terre shaped the slopes to create terraces that allowed them to plant grapevines, olive trees, lemon groves, and more, the rows supported by dry stone walls that snaked across the hills. It took a millennium of hard work. By the 19th century, at their peak, these narrow strips of cultivated plots covered nearly 4,000 acres.

In the 1950s, however, families began abandoning their plots. Marta Bonfiglio’s late father Marco, for example, went to work at a plant in the nearby port city of La Spezia. His job took much of his time and energy, and he soon stopped taking care of the vines. Like Bonfiglio, others gravitated toward better-paying and less back-breaking jobs. They moved to cities, or migrated. Cinque Terre, which in 1921 had nearly 8,000 inhabitants, currently has fewer than 4,000.

Over the past three decades, the region has found new life as a tourist destination. UNESCO granted the area World Heritage status for its scenic and cultural landscape, and a national park was created. Before the COVID-19 pandemic hit, three million visitors toured the five seaside villages that give Cinque Terre its name.

As tourism boomed, the terraces were increasingly neglected, as were their stone walls. Only a fraction of the land was still cultivated. More than just a picture of romantic ruin, the abandoned land and crumbling walls posed a threat. On October 25, 2011, during a six-hour span, 15 inches of rain fell on the villages of Monterosso al Mare and Vernazza. Mud and debris from the surrounding slopes slid down, charged torrents, and invaded the village centers. Modern culverts slowed the raging streams from discharging into the sea, making the flooding worse. One person died in Monterosso. Three lost their lives in Vernazza. Landslides cut the villages off and disrupted electricity and other utilities. For days, supplies could only reach the towns by sea or helicopter.

People from Manarola brought bread and drinking water by boat to Vernazza and helped clear the mud. What they saw, just a few miles away from their homes, stayed with them. They too lived surrounded by steep slopes of abandoned terraces that might collapse in the next heavy rain.

Dry stone walls, which are the backbone of Cinque Terre’s terraces, regulate water flows, function as fire barriers, and stabilize the slopes. They reduce the risk of landslides, floods, and avalanches, combat erosion, and can help keep the cultivated soil healthier and more productive. But if they’re falling apart, the walls may actually increase the risk of catastrophic events.

“What happened in Vernazza and Monterosso always looms over any village in the Cinque Terre,” Crovara said. “Certainly, restoring the amphitheater all around the village makes us feel safer.”

From the tragedy of the 2011 landslides and floods, a grassroots restoration effort was born. Starting with small meetings in homes, a group of local citizens created a foundation to restore the terraces.

“Especially in Vernazza, the effects of the cloudburst had been worsened by the abandonment of terraces and the lack of maintenance of stone walls and drainage channels,” says Eugenio Bordoni, vice chair of Fondazione Manarola.

Researchers at Genoa University’s Department of Earth, Environment, and Life Sciences (DISTAV in Italian) investigated the role agriculture abandonment had played on the hillsides. In the aftermath of the intense rainfall, DISTAV landslide expert Andrea Cevasco and colleagues mapped more than 500 shallow landslides around the Vernazza catchment, an area of about 2.25 square miles. Of those slides, 325 involved terraced areas. The most hazardous slides were associated with terraces abandoned in the last few decades.

“We consider such amounts of rain extraordinary if we compare them with what we know happened in the past,” says Emanuele Raso, a DISTAV-trained geologist who now works in Cinque Terre National Park. He adds that climate change could make such extreme rain events more common. With this potential problem in mind, since 2019 a collaboration that includes DISTAV, Fondazione Manarola, and other partners has been working on expanding the homegrown Manarola restoration project to other terraced hills.

“Maintaining landscapes in good conditions definitely makes it less vulnerable,” says Alessandra Bonazza. Her group studies the impact of climate change on cultural heritage at the Institute of Atmospheric Sciences and Climate of the Italian National Research Council.

Marta Bonfiglio remembers her father saying during a family meal, “Let’s give our plot of land to the foundation. It is not in good shape. At least, they will fix it.” He signed a 20-year lease and lent the patch to Fondazione Manarola for a small, symbolic rent. It was one of the first sites to be restored. Since then, the foundation has rebuilt more than 4,000 square feet of stone walls and cleared more than two acres of abandoned land parcels in the heart of the Amphitheater of the Giants. Some of the restored land has been given to the local winery cooperative, other parcels to four Manarola-based wine producers, including Crovara.

“The more the plots around the village are maintained, the less there’s risk of landslides above our homes,” Bonfiglio says. “We know very well that those who are cultivating, who are producing wine, are at the same time saving us.”

The Winemakers Bringing Viticulture Back to Venice

Women in Northern Kenya Rally to Save a Forest

Just a few years ago, Samburu women were using Kirisia Forest for firewood and charcoal. Now they're protecting it, and managing it sustainably.
Video

3:11
Want to see fewer ads? Become a Member.
From Around the Web
Atlas Obscura Trips
Culinary Naples: Producers, Purveyors, and Pizzaioli
View This Trip
Thanks for sharing!